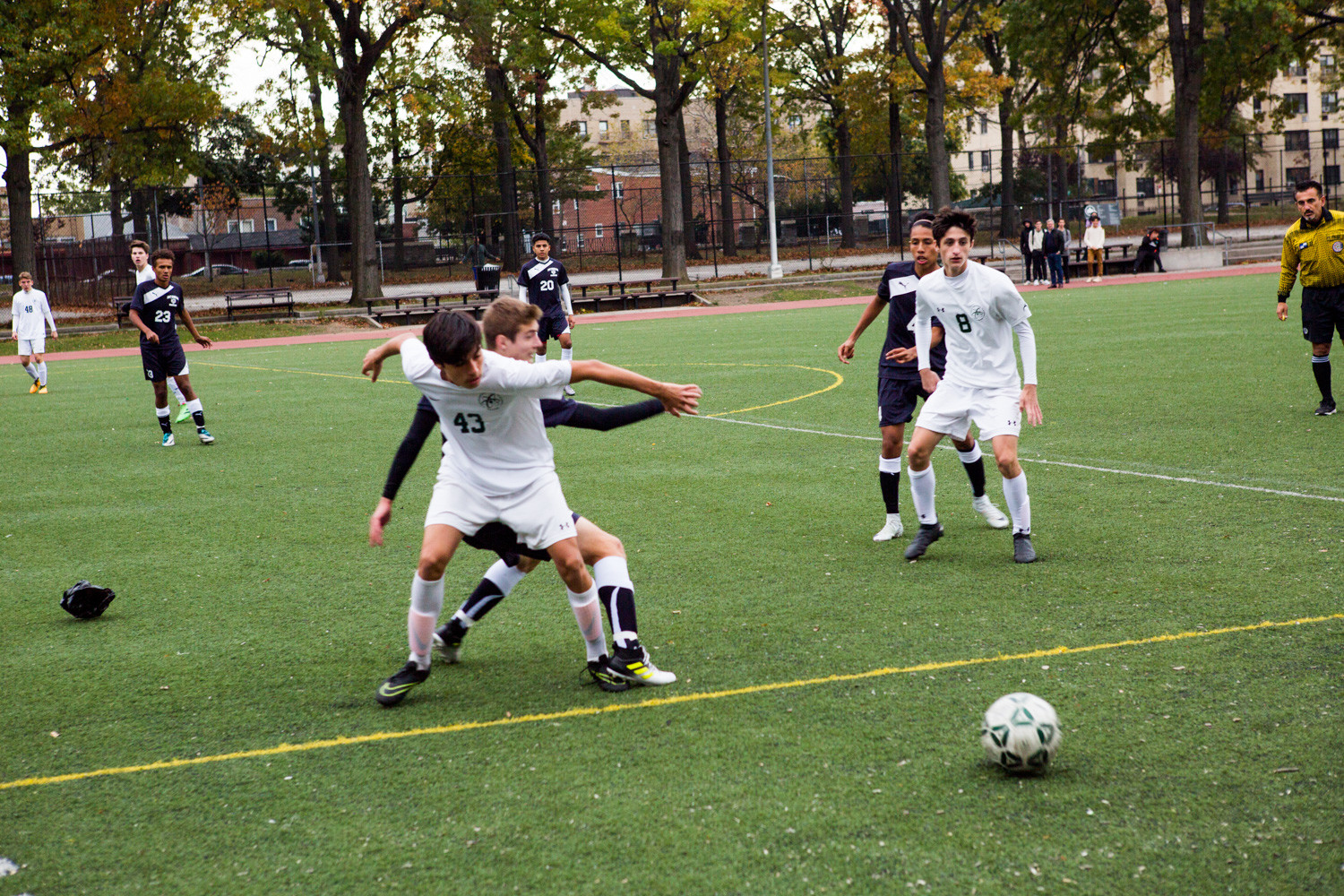 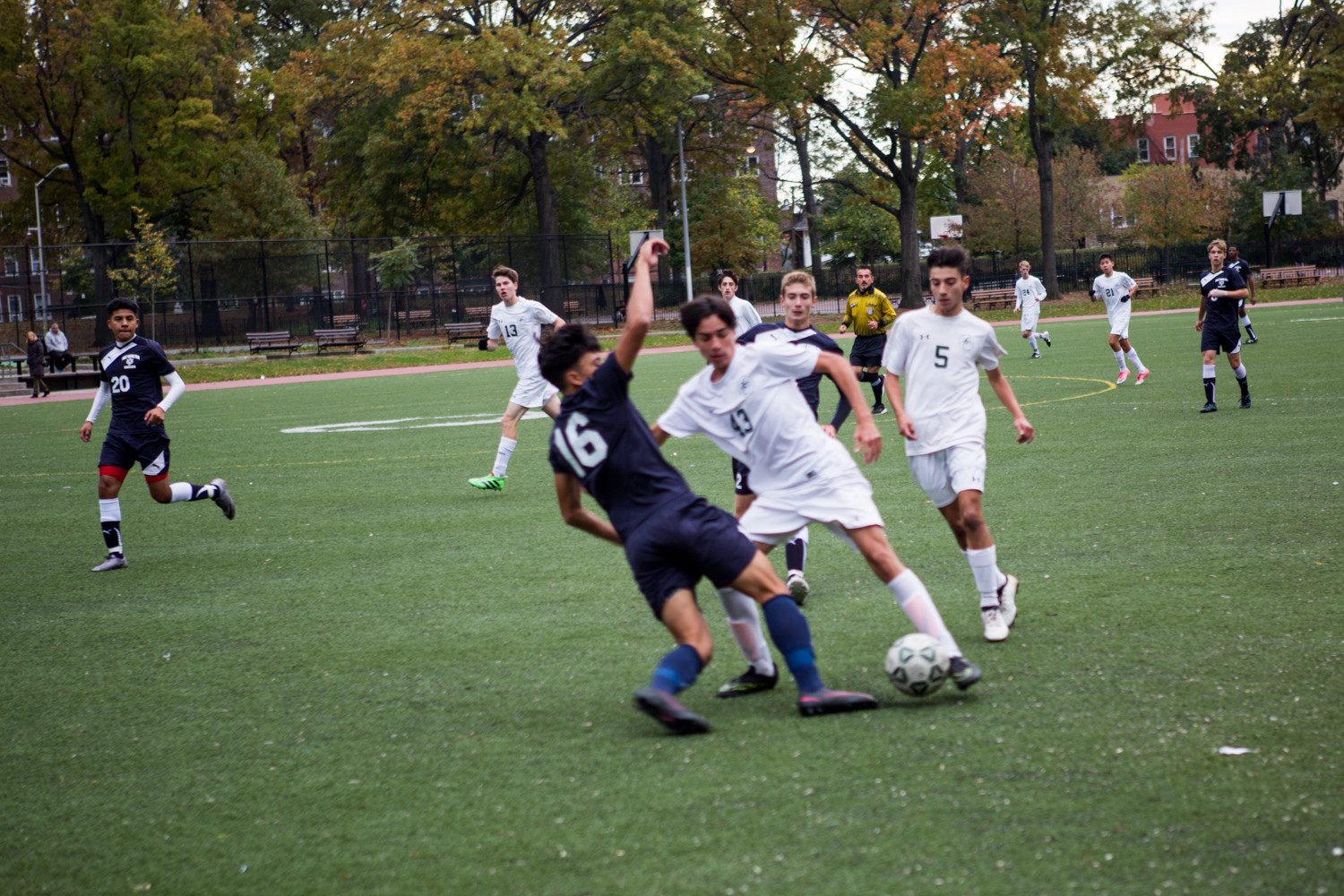 The day didn’t start off all that well for the Fort Hamilton boys soccer team.

The Brooklyn-based Tigers had to make the trek north (and west) to take on seventh-seeded Bronx Science in the second round of the Public School Athletic League playoffs. But because no school buses were available for the trip, the 10th-seeded Tigers were forced to use mass transit, needing a 90-minute subway ride to make the game.

Insult then met injury shortly after the game started when the Tigers lost one of their starters, Bradley Espejo-Nadanjo to a broken nose.

Hardly worth the trip, huh? Well, not quite.

Bronx Science was playing without one of its top players in Zach Seigelstein, who was sidelined with a broken foot. His absence was greatly missed as the Wolverines struggled to get anything going offensively while Fort Hamilton got a pair of goals from Chemarl Henry as the Tigers pulled off the upset with a 2-0 victory at the Williamsbridge Oval.

The loss ended the Wolverines’ season at 8-2-1.

“Zach broke his foot a couple of weeks ago, and he had been playing with a stress fracture in the top of his foot, and it was nagging him for a long time,” Science coach Phil Cancellaro said. “It’s a big loss. Zach was a creator. When he had the ball he could find people all over the field. He’d pepper the ball behind the fullbacks, he’d find guys on the wings, he’d take shots on goal. Just having him as an offensive threat was actually part of our defense.”

These same two teams played a non-league game two weeks ago in an effort to get playoff-ready, and Fort Hamilton took a 5-4 decision that day. That game, too, was played without Siegelstein. However, the Wolverines still managed to find the net four times.

Not this time around. The scoring chances we few and far between for Science, and it couldn’t capitalize when it did get a rare opportunity.

“I think maybe the nerves were hitting them in the beginning,” Cancellaro said. “It was hard to find their targets, they were rushed on a lot of shots. Fort Hamilton was very quick around the ball, and they put a lot of pressure on the ball. That’s a good team, very fast and very disciplined, and they were making our guys rush their shots toward the net.”

With the score still deadlocked at 0 in the second half, Science’s best scoring opportunity came when Daniel Morales lined up for a penalty kick with a chance to put the Wolverines in front. But his kick went high over the net and Fort Hamilton had dodged a bullet.

Morales, part of a senior class that compiled a superlative 39-3-5 regular-season record in their four years with the program, was reduced to tears after the game before being consoled by his teammates with hugs, handshakes and an ovation celebrating his career.

When Morales started as a sophomore, he came to the program very undersized, Cancellaro said. But he didn’t let his size take him out of the game.

“He was quick, he was tactful, he moved the ball around well,” the coach said. “Today shouldn’t define who he was as a player. He is a much better player than he showed on that kick.”

Henry netted his first goal of the day shortly thereafter for a 1-0 Tigers’ lead before adding his second tally in the waning minutes of the game. The loss of Siegelstein, which forced a change in alignment and assignments, was just too much for Science to overcome.

“It was huge not having him out there,” said Science goalkeeper Teddy Lowen, who allowed just nine goals all season while posting four shutouts. “He is just a great leader both on and off the field. He’s just a great all-around player and we really, really missed him today.

“But I’m so proud how all of us played even without him. We all played with great heart, even with that costly injury. But it’s tough to go out.”

The senior class of Siegelstein, Lowen, Morales, Alexander Bakos, Daniel Cabo Hervada, Ryan Catry, Lucio Vainesman, David Weisberg, Alexander Goldstein and Alexander Izeman reached the PSAL playoffs in each of their four seasons while clinching the Bronx A-1 Division title each season. Quite a resume to go out with.

“We’ve been through it all,” Lowen said. “We’ve been through all the ups and all the downs, and we just want to pass down all the knowledge that we’ve had these last four years to the younger kids and hope they can do better than us in the future.

“We can also say that the seniors were four-time division champions, and we’re really proud of that.”