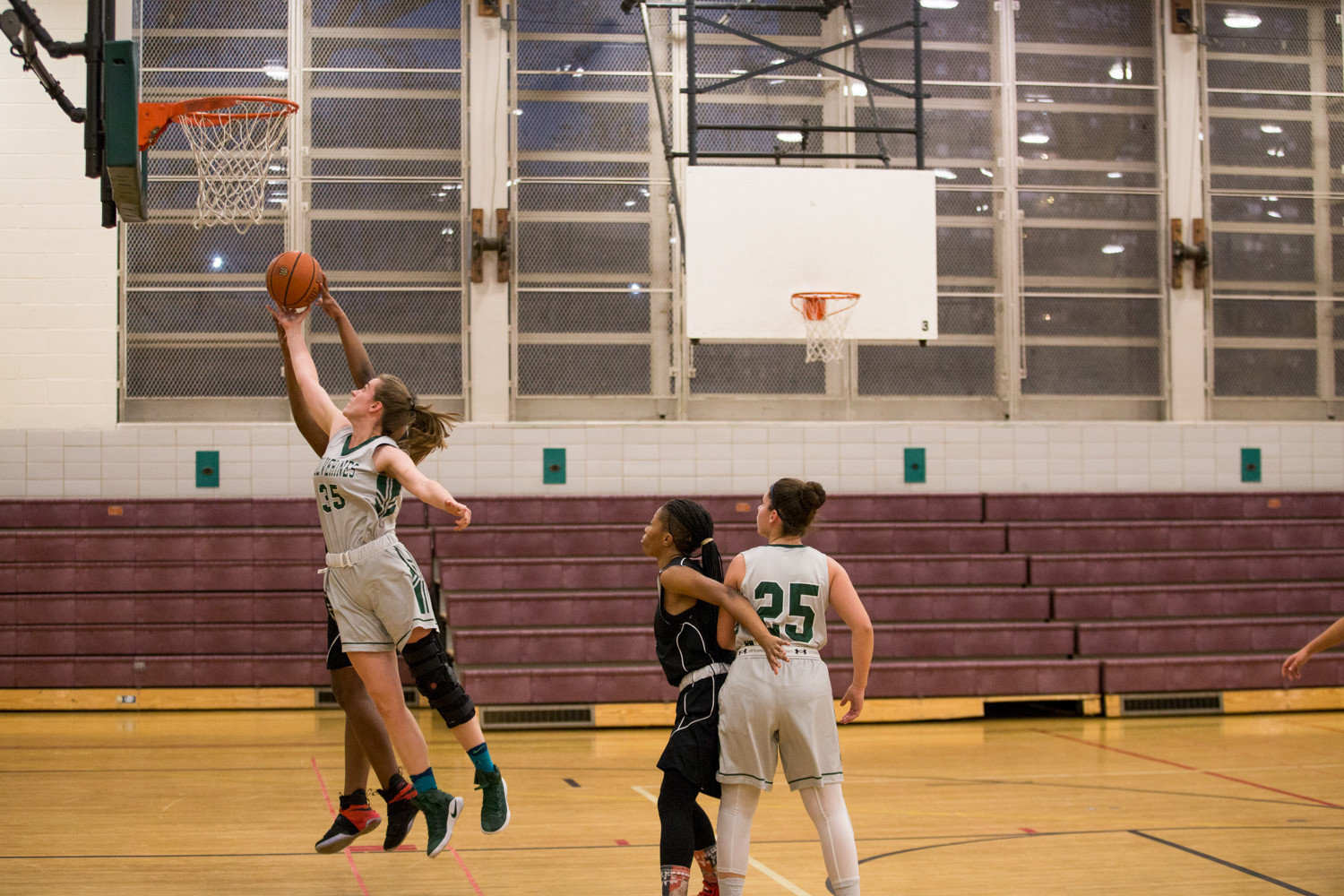 While freshmen Carolina Lopez and Sarang West handled the bulk of the scoring, Science senior Georgia McKay took care of the boards with 13 rebounds in the Wolverines’ win over Morris campus.
Julia Sclafani 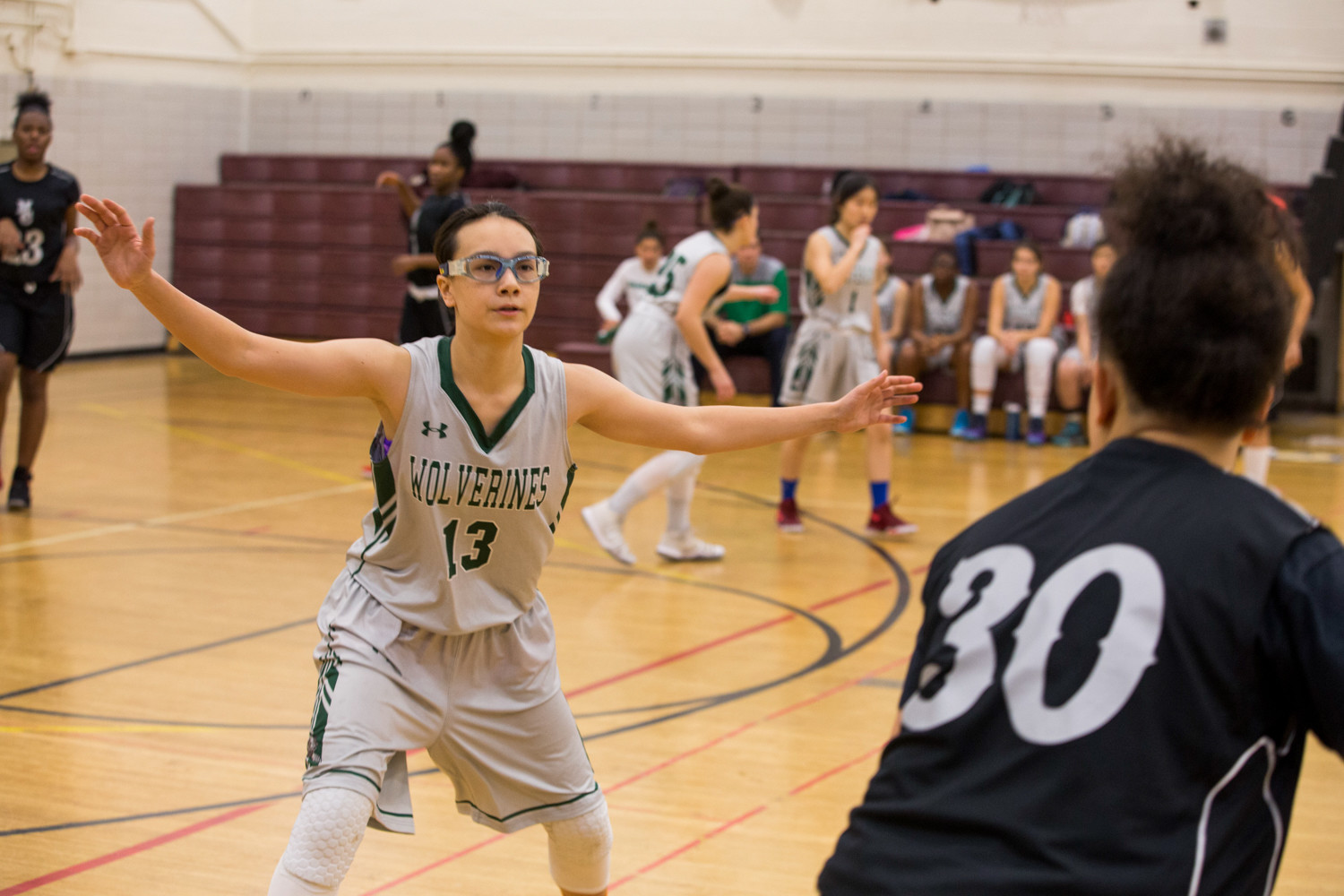 Legendary college basketball coach and television analyst Al McGuire — known for as much for his colorful quotes as his victories — once said, “The best thing about freshmen is that they become sophomores.”

Most of the time that sentiment rings true. But not in the case of the Bronx Science girls basketball team, which boasts a trio of freshmen who have helped the Wolverines jump out to a 4-0 start to the season.

So while freshmen are often times a rich source of agita for most coaches, Science head coach Michael Mei sees his trio of first-year players as a source of comfort.

“We have some very talented freshmen and we’re fortunate to have them,” said Mei, now in his sixth season with the Wolverines. “Carolina I’ve known a little longer than I have Sarang, because I saw Carolina on the (Amateur Athletic Union) circuit. But as soon as Sarang found the basketball and I was able to watch her in a shoot-around in the gym early in September, I knew she was going to be OK, too.”

They are far more than just OK. In the victory over Morris Campus, Lopez opened the show by scoring all but two of Science’s 18 points in the first quarter, finishing with a game-high 21. Twelve of those points came via four three-pointers.

West, who had Science’s only other points in that pivotal first quarter, logged 15 in the game — 10 coming in the second half.

Del Deo chipped in with three points but pulled down nine rebounds in the contest, second on the team to senior Georgia McKay’s 13 boards.

“They had a lot of game experience before they arrived here, so that definitely helped,” Mei said. “They’re poised, they’re not afraid, and they’re assertive. They still make their fair share of freshmen mistakes, but we’ll certainly cut down on those mistakes as we hammer home the fundamentals.”

They say you can’t teach speed, and that’s what this trio has in abundance. It’s what they have used to fuel the Wolverines’ success so far this season.

“We’re all young and quick and (Mei) said we are the fastest team he’s had yet,” said Lopez, who has led Science in scoring in three of its four wins. “We also have this transition play where you go from one end of the court to the other in a few seconds, which we’re able to do with our speed, which is very good. And we also have Lucy, who is our big man, and she works a lot with Georgia, our senior, and they work off each other well.”

Usually there is a “getting-to-know” phase freshmen go through as they enter their first season. But this trio has blown right by that, already flourishing in the season’s early days.

“We’re friends off the court, so we were able to meld together,” Lopez said. “And over the summer we played together, and also at the start of practices in early September, so we’ve been playing together for awhile now.”

Despite their early-season success, Mei cautions there is a ways to go before his team reaches its potential.

“We’re still definitely a work in progress,” Mei said. “I know where this team can be about a month from now, but we still have a lot of work to do, a lot of fundamentals to drive home.

“There are a lot of new pieces and they’re still learning each other’s movements, each other’s tendencies, and the chemistry is going to take a little bit of time. But hopefully we’re moving in the right direction.”

Science has finished second to Mott Haven in the Bronx A South Division the past two seasons. And while Mei thinks Mott Haven could be contenders again this year, he thinks his Wolverines should be right in the mix for the division crown again this season.

“Mott Haven has won our side of the Bronx for as long as I’ve been here,” Mei said. “But they’re a young team this year. But certainly I think we’ll be in there. If we can eliminate some of the lapses in concentration, I think we can hang with anybody.”