And a thousand daffodils to you, too 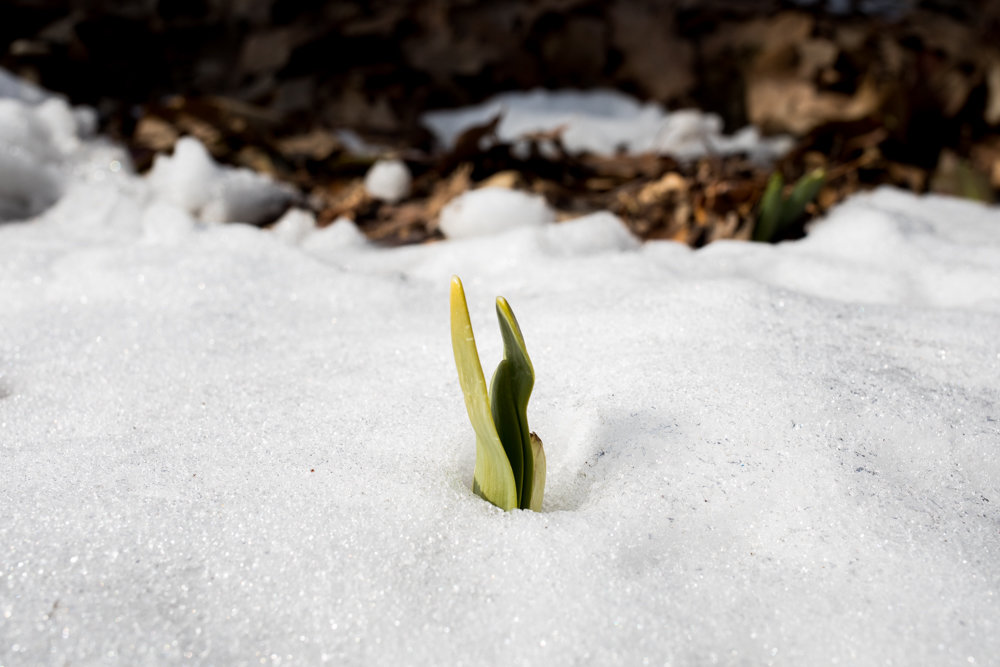 A daffodil sprout parts the snow in Brust Park at West 242nd Street and Manhattan College Parkway. The volunteer organization Stewards of Brust Park planted 1,000 daffodils they hope will bloom this spring. The organization works throughout the year to maintain and beautify the space.
JULIUS CONSTANTINE MOTAL 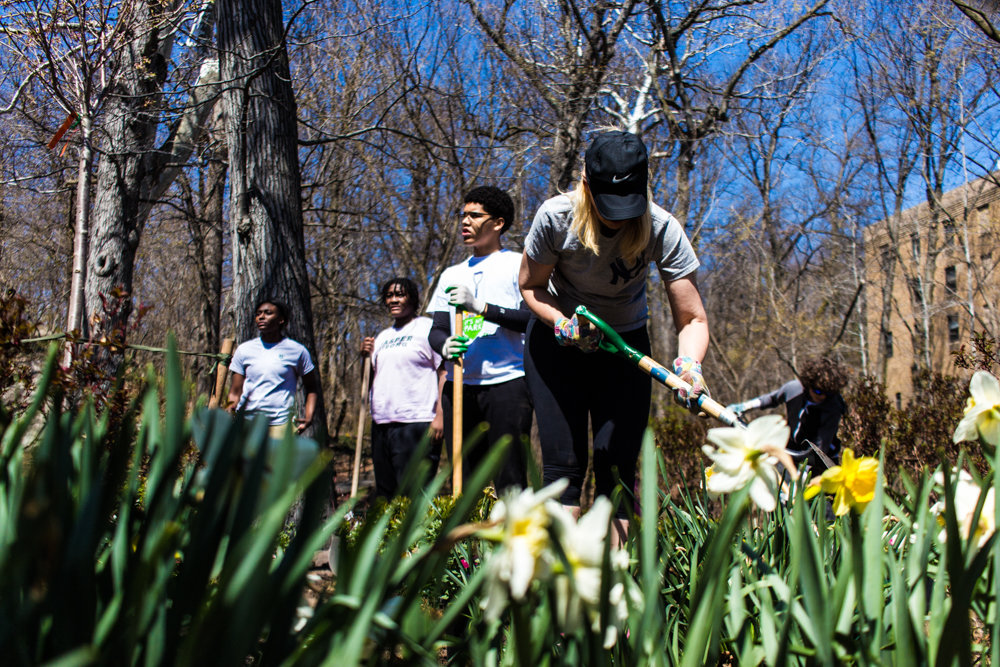 Joanne Nolan, a volunteer with the Stewards of Brust Park, digs a hole last year. Nolan, at the time, was a newer member of the organization, and more recently helped plant 1,000 daffodils throughout the park at West 242nd Street and Manhattan College Parkway.
AARON MAYORGA / File 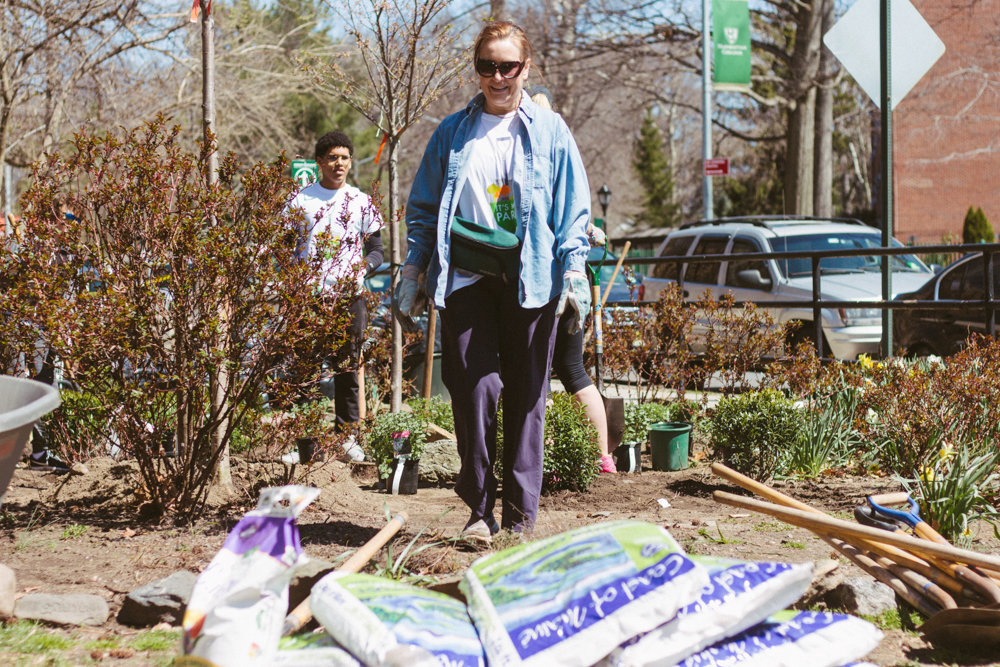 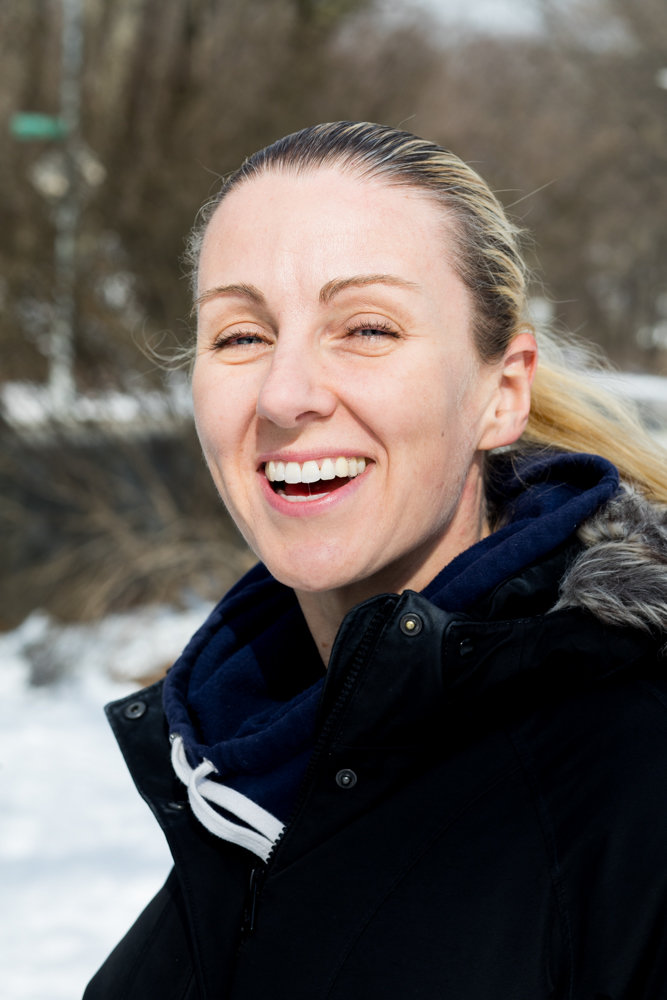 Joanne Nolan has found a community of kindred souls in the Stewards of Brust Park, a volunteer organization that works throughout the year to maintain and beautify the eponymously named park near Manhattan College. They recently planted 1,000 daffodils ahead of spring.
JULIUS CONSTANTINE MOTAL 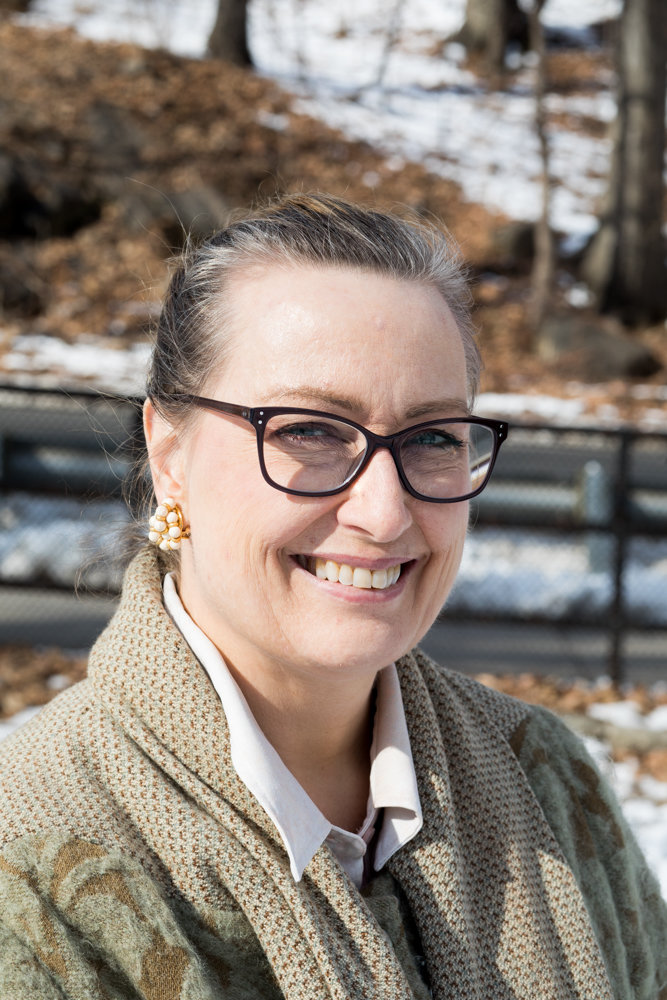 Jacqueline Hosford feels Brust Park has improved significantly since the founding of the volunteer organization Stewards of Brust Park in 2017. Hosford and her fellow volunteers recently planted 1,000 daffodils they hope will bloom magnificently once winter finally thaws.
JULIUS CONSTANTINE MOTAL
Previous Next
By ZAK KOSTRO

Jacqueline Hosford had a vision. A plan.

A woman of action, Hosford set to work sowing seeds to flood the park yellow. But she actually got more than what she’d bargained for. Double, in fact.

Hosford coordinates Stewards of Brust Park, a community volunteer organization focused on maintaining the eponymously named green space at West 242nd Street and Manhattan College Parkway, split by Greystone Avenue. On a chilly day last fall, her organization planted 1,000 daffodils in the park they hope to see blossom this spring in an explosion of sunny color sure to draw attention of passersby and neighbors alike.

The stewards wanted to “let the neighborhood know that something really amazing is going on” in their beloved park, Hosford says. And they pulled it off, thanks to a thousand bulbs from New Yorkers for Parks. But more broadly, their efforts are a kind of endless task, physically strenuous at times. But for Hosford, it’s a labor of love.

“It’s ongoing,” Hosford said. “It’s really great that I don’t have to do this alone.” In fact, she couldn’t manage it without fellow stewards Patsy Smyth and Joanne Nolan. And she’s excited to see the fruits of their labor come spring.

Brust Park is a kind of whispering oasis Hosford and other community park enthusiasts say offers exquisite garden spots, an area of native forest, and even a small playground. Its stewards work closely with the city’s parks department to keep it kempt, blooming and beautiful — or as close to that as they can manage — by regularly gardening, mowing, seeding, planting, weeding, scraping and painting.

Of course, it wasn’t always that way. Five years ago, Hosford and her husband tired of seeing giant rose bushes dominate the park across from their apartment and decided to take matters into their own hands. They bought a lawnmower from Home Depot and set to work cleaning it up.

Hosford’s group, meanwhile, is comprised of neighbors while still partnering with students and a growing list of local schools and groups.

The history of Brust Park began in 1882, when the land was acquired by the city, according to the Stewards. In fact, it’s one of the oldest parks in Riverdale. The not-even 2-acre park has an upper and lower section divided by Greystone.

Along with its lawn and gardens, a path snakes through the native forest. The play area offers a jungle gym for kids looking to blow off steam. And come rainy season, there’s even a trickle of a stream and a small pond.

The stewards envision creating a sanctuary for all to enjoy. They’ve toiled in the park’s lower section for years, but made their group official in 2017, laboring under the auspices of the city’s parks department, in conjunction with the Partnership for Parks.

And when it comes to keeping the park sanctuary-like, the stewards are game to tackle just about anything — whatever it takes, really. In addition to daffodils and other flowers, they plant trees and bushes. Water, weed, trim, mow, rake, clean — no task is out of bounds.

Their goal in enlisting a small army of neighbors and environmentally inclined students is to “build a strong and sustainable coalition to maintain and improve Brust Park.”

Cleanup and gardening happens year round. And that’s much needed given the chronically underfunded parks department can’t always provide the kind of regular quotidian maintenance most parks need to prevent takeover by those gargantuan rose bushes the Hosfords targeted in their early preening and pruning.

Other current projects include a smattering of fun, educational activities — like the daffodil romp, which Hosford and fellow stewards turned into a totally tactile teaching moment, offering tiny hands a chance to roll up sleeves and bury bulbs in soil. And apparently the kids dug it.

“We wanted it to be, at the beginning of our strategy, to create educational programs for our kids,” Hosford said. And that strategy paid off last November. Thing is, they’d ordered 500 daffodils, but received 1,000, which meant double the work for the stewards and their much younger volunteers.

“We worked as a team,” Hosford said, but watching the smaller hands at work was “just magical.”

The stewards also look to secure more grants. To that end, Hosford is gunning to gain the group official not-for-profit status as soon as possible so they can really ramp up fundraising.

Of course, some more extensive infrastructure issues — like improving drainage of a small brook that runs down the lower park into the city’s sewer, and replacing or significantly upgrading stairs connecting the lower park to Greystone Avenue, and adding lighting — will inevitably require some major capital.

But in the meantime, there’s much to look forward to, including a trio of “It’s My Park” days in April and May featuring three-hour cleanups covering both the lower and upper parks.

But is all that hard work really worth it? Without a doubt, Hosford said, adding it all gives her a great sense of satisfaction.

And her goal is to share that with more people, from the fairly large community of seniors in the area, to younger families coming in with kids.

“It’s just wonderful to see them enjoying the park,” Hosford said. “There’s a little more of a smile on everyone’s face.”