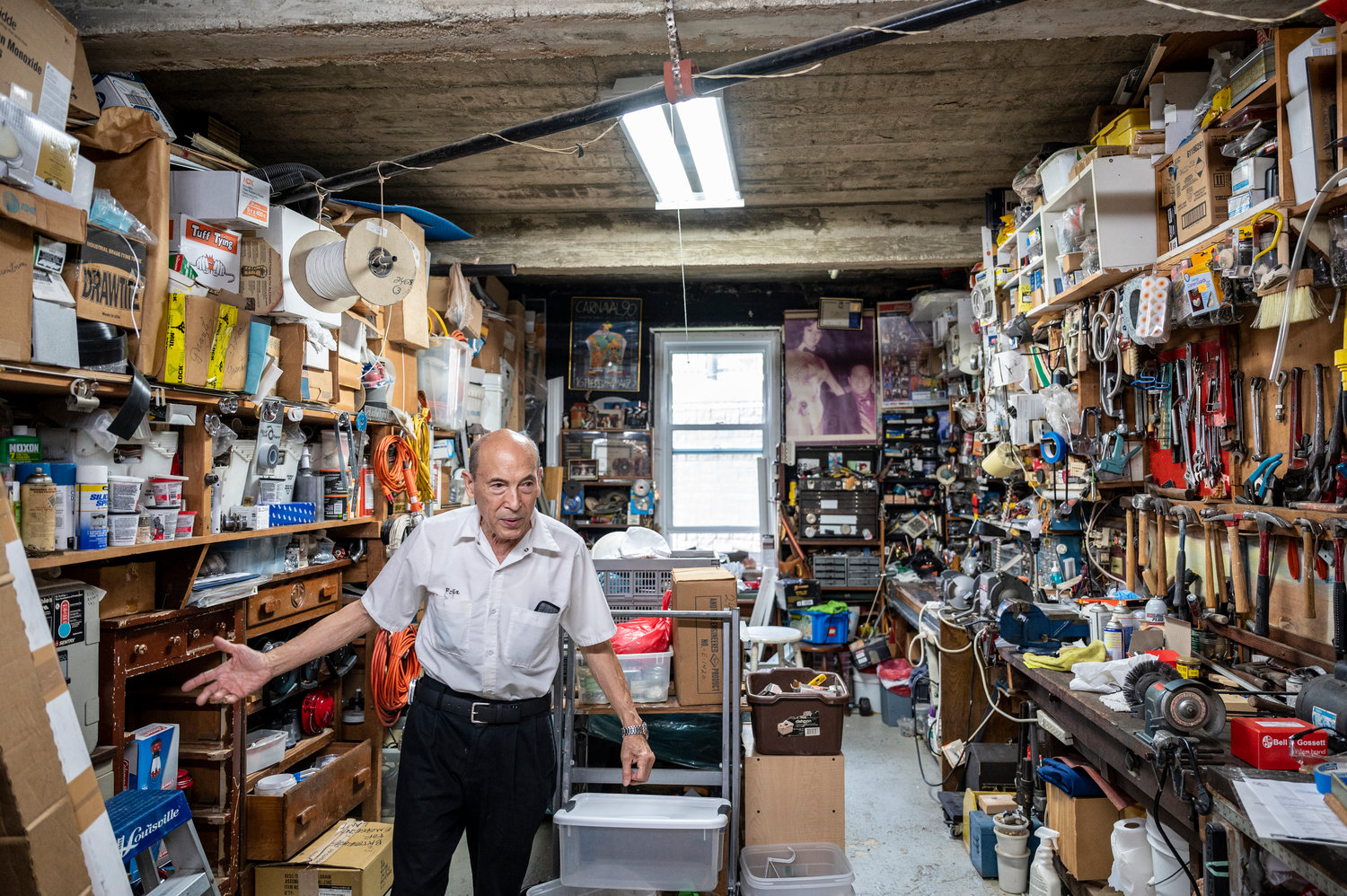 Felix Lam has spent the past 50 years as superintendent of 2465 Palisade Ave., in Spuyten Duyvil. He has his own workshop in the basement where he keeps his tools.
HIRAM ALEJANDRO DURÃN 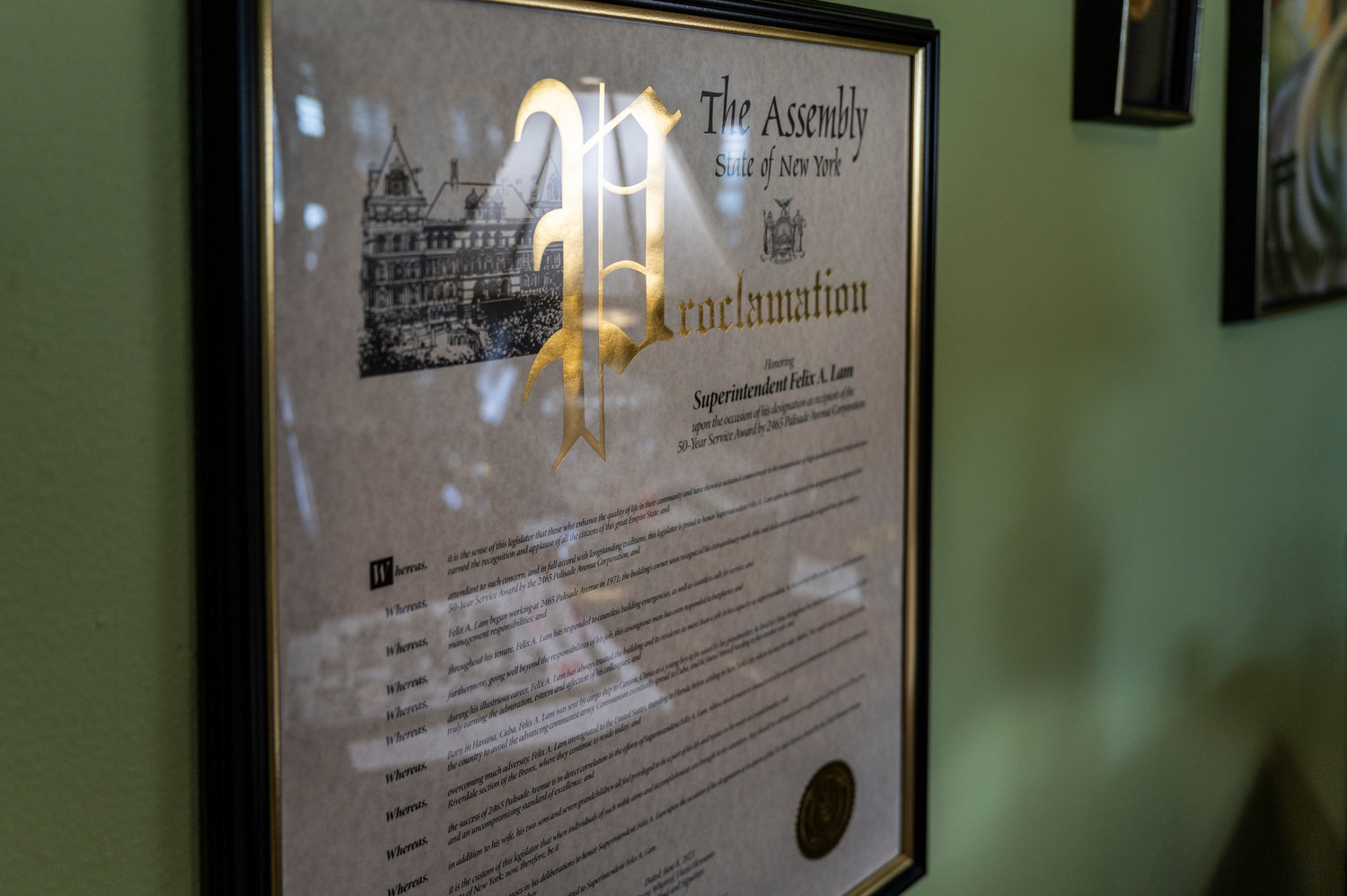 The co-op residents at 2465 Palisade Ave. honored Felix Lam with a 50-year service award for his time and dedication as their building’s superintendent. Because of the coronavirus pandemic, the ceremony took place over the Zoom online videoconferencing app.
HIRAM ALEJANDRO DURÃN 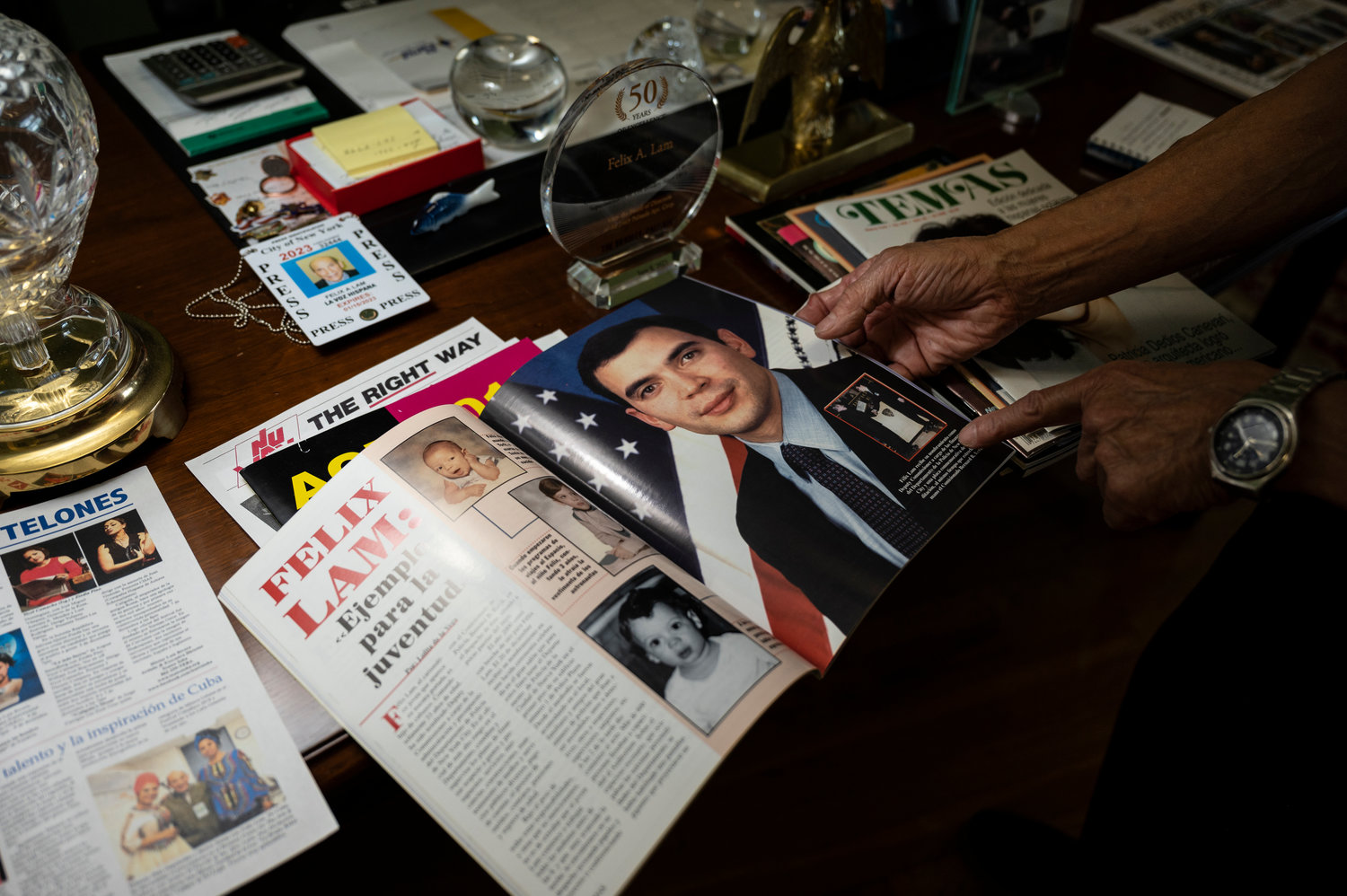 Felix Lam is most well-known by his peers as the super of 2465 Palisade Ave. Yet he also spent more than two decades photographing for a few Spanish magazines such as Canales.
HIRAM ALEJANDRO DURÁN
Previous Next
By BRENDAN O’SULLIVAN

Fifty years is a long time. Adults have kids, and those kids have children of their own in such a span.

It could seems like an eternity that many can’t grasp — especially if they haven’t even lived that long in the first place.

But Felix Lam grasps it. He’s been the superintendent at 2465 Palisade Ave., in Spuyten Duyvil for 50 years. The 81-year-old has made his home — and career — at the eight-story co-op since he was a young man. And how does that make him feel?

“I’m very happy about it,” Lam said. “And everybody in the building is also very happy that we’re here so many years.”

Lam not only works at 2465 Palisade, he also lives there in a “very nice” two-bedroom apartment with a river view. He punched the timeclock for the first time in 1971 when Richard Nixon was in the Oval Office, Nelson Rockefeller led the state government in Albany, and John Lindsay took up residence in Gracie Mansion.

Yet despite his longevity, 2465 Palisade wasn’t even Lam’s first job as a super.

Instead he spent six years at 9 New St., in Eastchester back in 1965, repairing, cleaning and maintaining the apartment building there.

But it was a trip into the city that changed everything for Lam. As their car crossed the Henry Hudson Bridge, Lam gazed at the river and city surrounding it, telling his wife he wanted to move to Spuyten Duyvil. And that wish came true shortly after.

Lam found a job listing in The New York Times for the Palisade Avenue building. He applied and was quickly hired.

“They gave me the opportunity to work here at 2465 Palisade,” Lam said. And “I’m still working today.”

Lam’s job includes tasks such as fixing electrical blackouts, keeping the elevator running — and toilets not running — as well as stopping floods and fixing leaky faucets.

The labor for a super is typically ordinary, but Lam’s work ethic — according to Paul O’Brien — was extraordinary.

“There are people here who’ve been here almost as long as Felix,” said O’Brien, the co-op’s president. “There are a few old-timers left, and some of them are like family to Felix. And he’s also become friendly with newer people who’ve moved in. He’s the kind of guy who keeps an eye out for the building and for its residents.”

If O’Brien’s words aren’t convincing, just imagine Lam chasing down burglars when he saw them stealing from an apartment — pursuing them until police caught up to him. It happened, albeit in Lam’s younger days.

Such dedication and commitment are reasons why he earned the 50-year service award.

The commemoration, which included a speech from Assemblyman Jeffrey Dinowitz, was held over the Zoom online videoconferencing app June 8. Normally such a meeting is limited to residents, but Lam’s family was invited to attend and watch him be honored.

Martina Lignon, 91, has lived next door to Lam for all of his 50 years there, so she knows him “quite well.”

“He is a very nice person,” Lignon said. “When you call him, he always answers.”

Lam’s trustworthy, too, Lignon said, as he can be relied upon and looks after people. Even if they need work in their kitchen, like she did.

And while repairs may seem like they don’t hold much significance, one from the early 1980s was uniquely memorable for Lam.

“I did a renovation in some apartment for the people,” Lam said. “And today, they still have the same kitchen, and everybody is very happy.”

Lam’s impact on people over a half century is evident. But while a long time, Lam considers it only a single chapter in his life.

He also spent more than two decades as a photographer, his work featured in a handful of Spanish magazines, like Canales.

But his first chapter was probably his most daunting one — trying to get to the United States in the first place.

He was born in Cuba to a Chinese father and Cuban mother, but was sent to China to live with his grandmother. However, Mao Zedong ruled communist China at the time, forcing Lam to flee back to his birth country.

Once again, communism — this time through Fidel Castro — prompted Lam to leave. He dreamed of living in New York City, but ventured to Mexico instead. From there, it was Costa Rica and then ultimately Florida.

But the Sunshine State wasn’t so sunny for him. Lam was sent to a detention camp, only to be saved by extended family in the area. Then — finally — his dream came true, and he moved to the city.

And now, more than a half-century later, Lam continues living out his dream — a dream that continues with each day of work.

To be honored by those he has served and worked with for so long? For Lam, that’s simply a bonus.

“Everybody came to know me and see the way that I was working,” he said. “They treat me very nice (and) very good.”