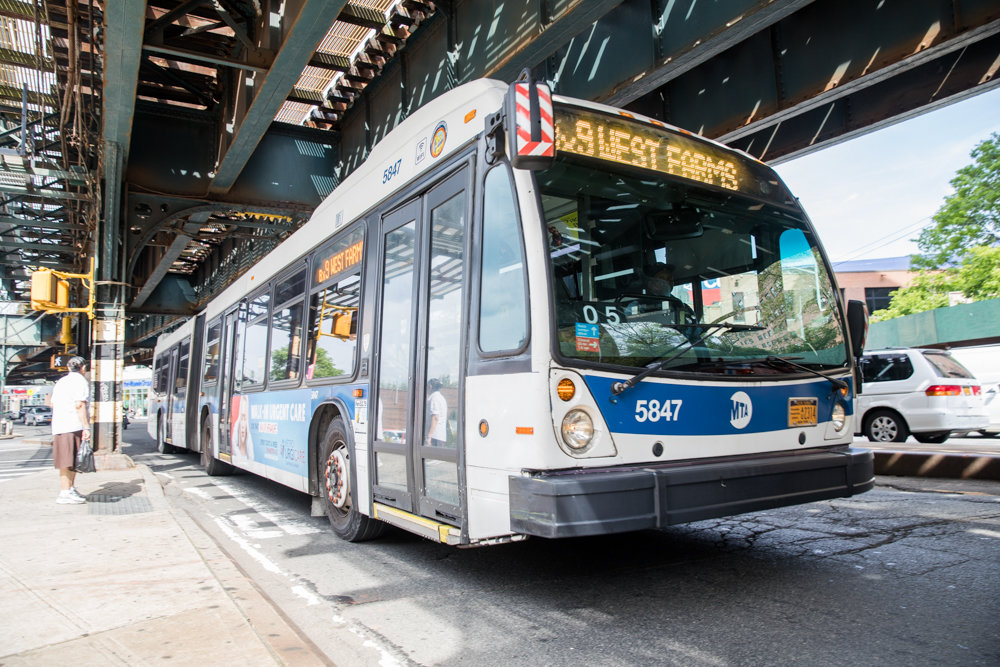 A Bx9 travels south along Broadway, part of a corridor that could get significantly more crowded if the city’s transportation department installs bus lanes between West 225th and West 230th streets.
JULIUS CONSTANTINE MOTAL 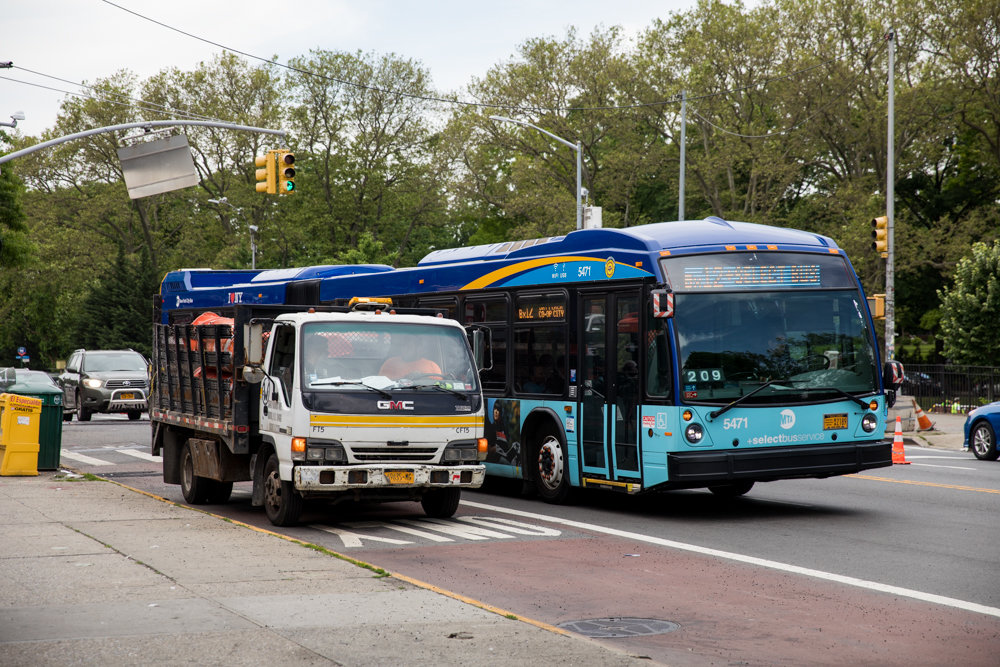 A Bx12 bus navigates around a truck idling in the bus lane on West Fordham Road. The city’s transportation department wants to install bus lanes like this on Broadway between West 225th and West 230th streets in Marble Hill.
JULIUS CONSTANTINE MOTAL 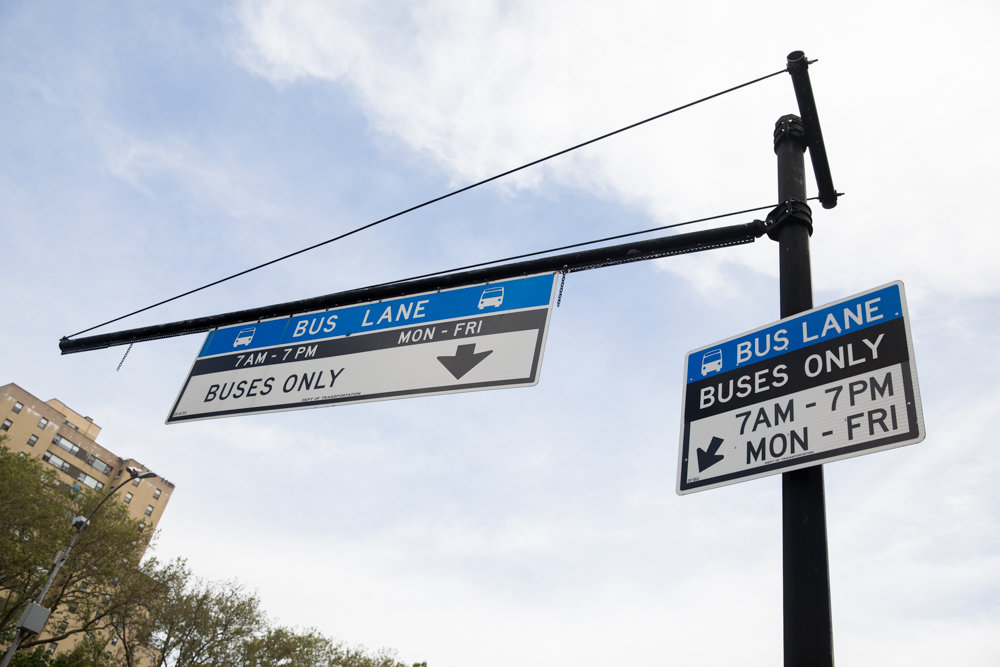 Signs along West Fordham Road indicate the hours of operation for its bus lane. The city’s transportation department wants to install bus lanes like this on Broadway between West 225th and West 230th streets in Marble Hill, but it seems such lanes have been met with mixed success in other areas of the city.
JULIUS CONSTANTINE MOTAL 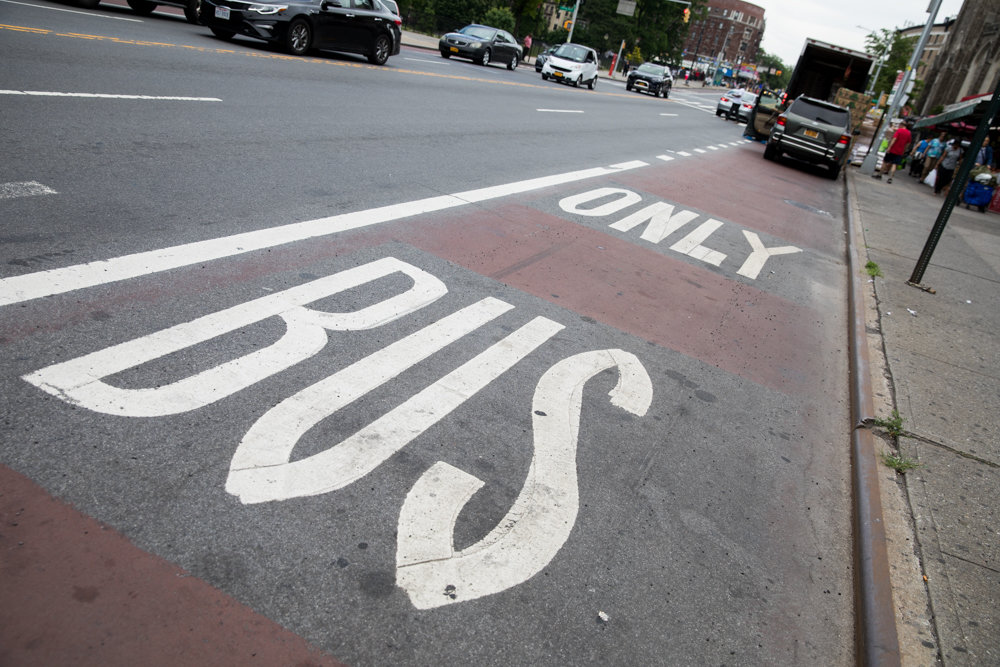 During peak travel times, bus lanes, like this one along West Fordham Road, are supposed to optimize transit by providing travel lanes for buses free of traffic. But motorists often occupy spaces along them, forcing buses to have to navigate around them.
JULIUS CONSTANTINE MOTAL 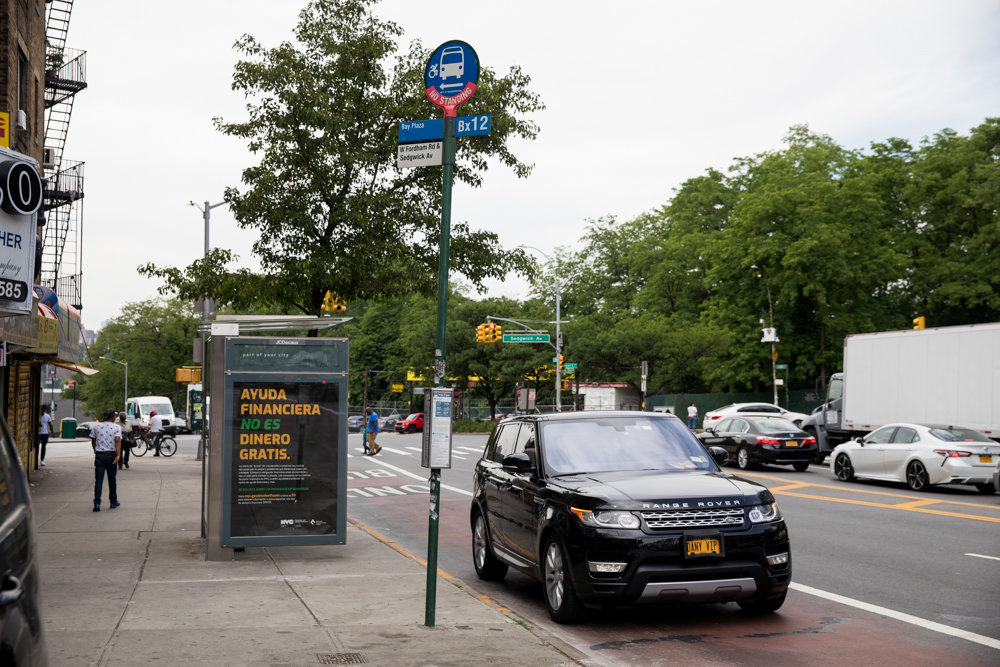 A car idles in a bus lane along West Fordham Road, which is a persistent problem for buses.
JULIUS CONSTANTINE MOTAL 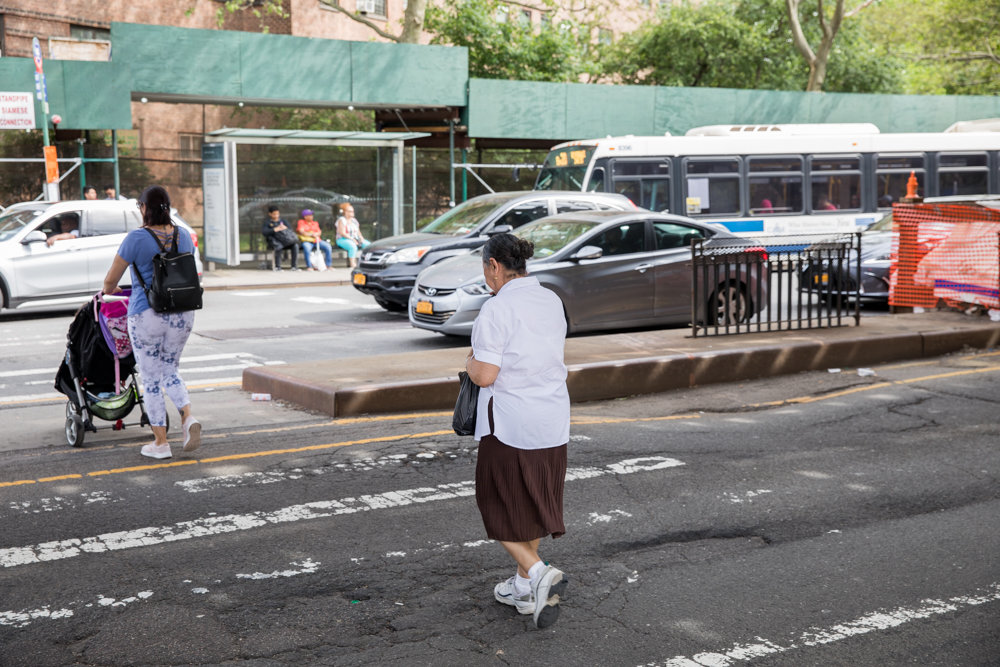 First it was bicycle lanes sandwiching Broadway along Van Cortlandt Park. Now, if the city’s transportation department gets its way, it could be bus lanes just a mile or so south in Marble Hill.

DOT officials are floating a proposal to add daytime bus lane restrictions between West 225th and West 230th streets, vexing Community Board 8’s executive committee, still weary from the bike lane debacle of a year ago.

Dan Padernacht, chair of the CB8’s traffic and transportation committee, received a call from DOT officials last month requesting time to present the plan during his June committee meeting.

“DOT wants to come in two weeks,” Padernacht said. “I don’t think we should put them on the agenda because I don’t think we can handle that much notice in getting the word out.”

The transportation department wants to limit a northbound and southbound lane on Broadway to buses only from 7 a.m. to 7 p.m., Padernacht said. Doing so could eliminate parking and snarl traffic heading over the Broadway Bridge to and from Manhattan. DOT wants to meet with CB8’s traffic and transportation committee as soon as possible, Padernacht added, to ensure the change gets done before the end of the year.

Adding bus lanes could create tremendous implications — and unintended consequences — that could reach far beyond the immediate area.

CB8 member David Gellman wondered aloud if the transportation department’s plan was to address congestion on and just south of Broadway Bridge.

“Because that is always a mess,” he said. “That may be what they’re trying to address, but they’re not telling us that.”

“This might mess up our only access to the closest hospital, too,” added Lisa Daub, CB8’s secretary. “So it’s a serious issue.”

Bus lanes are a common remedy for lagging and unreliable bus service. A 2018 study by the city comptroller’s office found that despite efficiency upgrades like bus lanes, problems persisted in select bus service routes like the Bx12. Where bus lanes existed, they weren’t designed to “repel general traffic and are too often under-enforced,” according to the study.

As a result, unauthorized vehicles often use bus lanes to pass, stand, pull into and out of parking spots, and to drop off passengers.

“Ideally, a single ticket (or the fear of receiving one) will make drivers more conscientious and alert, preventing any future infractions,” the study stated.

But almost 12,000 unique vehicles received five or more tickets for bus lane violations in the 18 months before the study was published.

“In my personal opinion from what I’ve seen outside of the district, I think adding bus lanes makes traffic worse,” Padernacht later told The Riverdale Press. “I don’t necessarily know that the savings in time is worth the congestion of traffic and delay to any response times that might occur for emergency services.”

Board members were perturbed by how fast transportation officials had hoped to push a presentation through, Padernacht said. Two weeks was not enough time to explain the issue’s importance to all members of the community, and the traffic and transportation chair would rather ask DOT to make its presentation in the fall instead, after CB8’s summer recess.

Because transportation officials gave few details in their initial conversation about the plan, it’s unclear where each lane would be, or if it means losing parking spots.

“We don’t have any detailed drawings,” Padernacht said. “We have no renderings or presentations. I only have those bare-bones concepts.”

“On that side you’re talking about one bus lane and one travel lane because nobody travels on the inside (lane) because it’s not safe to drive through there,” Padernacht said. “People use that to pull in and out of parking spots.”

Until DOT addresses big questions about potential traffic, congestion and bottlenecking resulting from installing bus lanes on that stretch of Broadway, CB8 is disinclined from backing the project, Padernacht said.