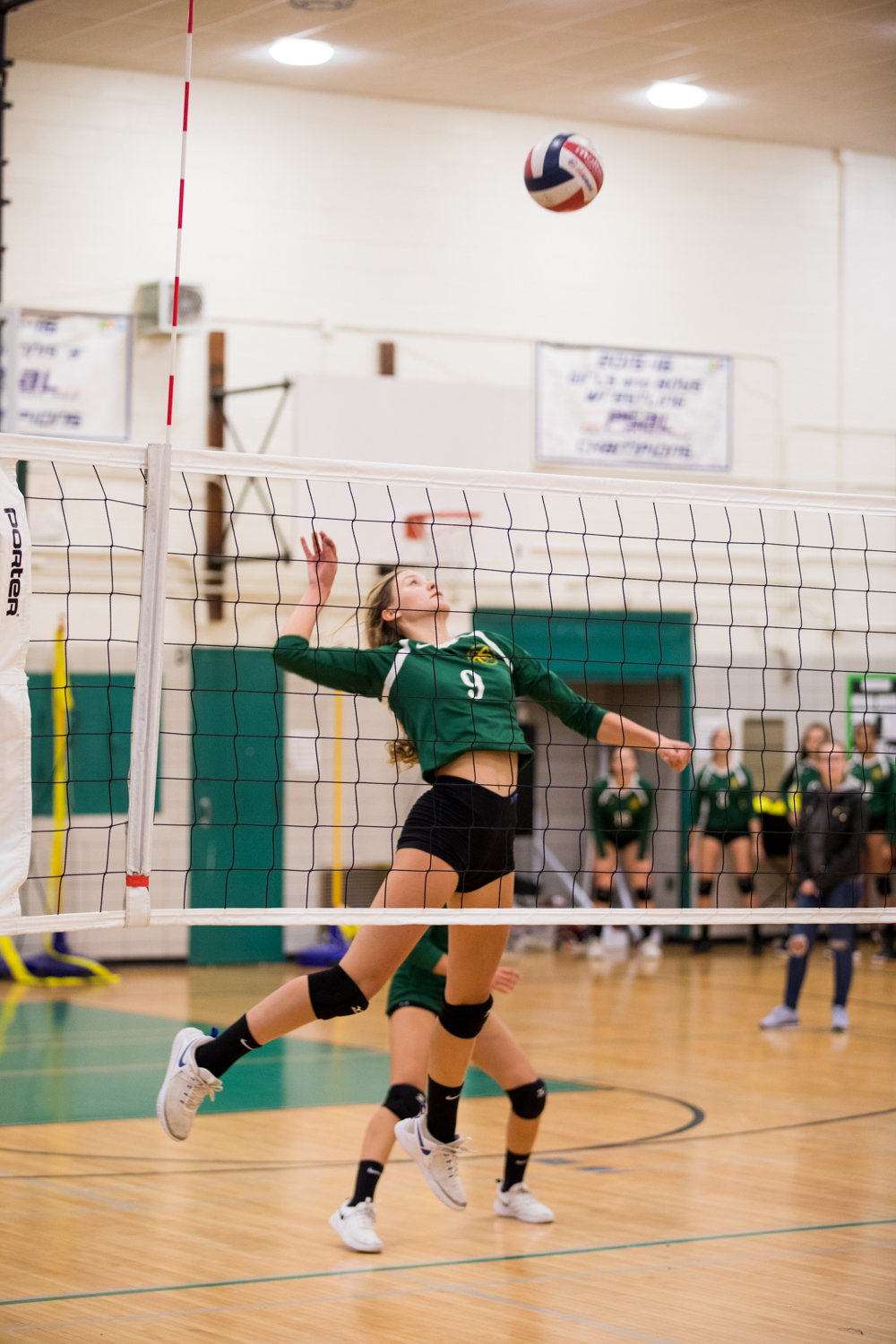 Anya Lollos proved to be too much for East Harlem as the Bronx Science junior recorded nine kills and two aces in the Wolverines’ first-round playoff win.
JULIUS CONSTANTINE MOTAL / File 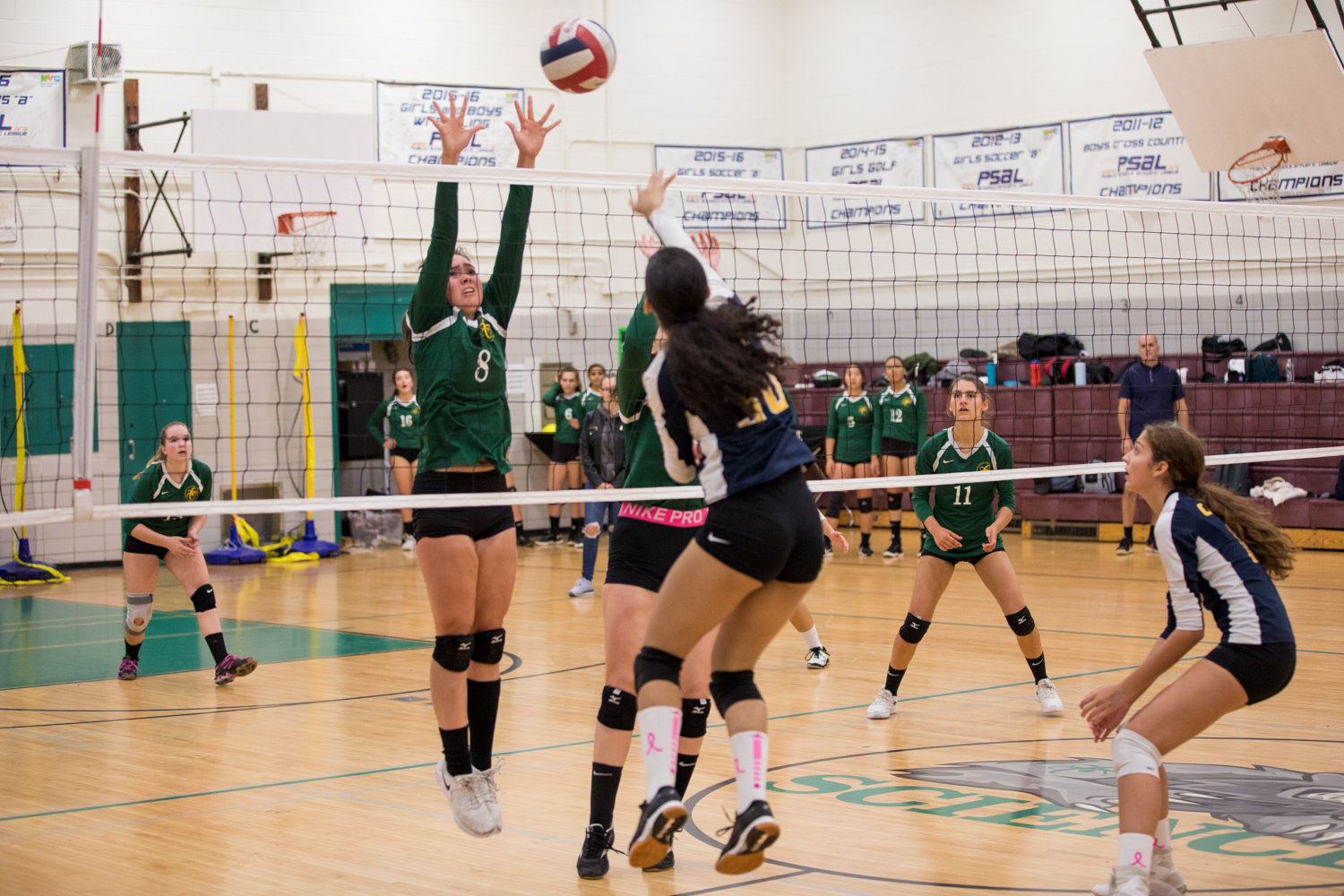 Bronx Science sophomore Grace Lorch, an assist machine for the Wolverines, piled up 11 of them in Science’s playoff win over East Harlem.
JULIUS CONSTANTINE MOTAL / File
Previous Next
By SEAN BRENNAN

They have 49 regular-season victories over the last four seasons. Make that the last four unbeaten seasons. They also have notched four consecutive Bronx A Division championships, and have more or less owned Bronx volleyball the past six or seven years.

But what the Bronx Science girls volleyball team is still searching for is that first PSAL city championship. It’s one the Wolverines came ever so close to winning three seasons before they were stopped in the semifinals.

So with the 2019 regular season now squarely in the rearview mirror with the postseason at hand, the Wolverines’ focus has gone from steamrolling divisional opponents to obtaining volleyball’s Holy Grail.

“We’ve got our eyes on the big prize,” Science head coach Dan Skilins said, “and we’ll stay focused on that.”

And if the Wolverines’ first-round playoff performance is any indication, they are laser-focused on bringing home the gold.

With Bronx Science displaying its usual brilliance, the Wolverines’ postseason got off to a strong start barely breaking a sweat taking down East Harlem 25-9, 25-15 to advance to the second round.

“Anya played pretty well and so did Darya,” Skilins said, referring to Science’s Lollos sisters. “Actually the whole team played pretty well. We started strong in both games, but we had a little hiccup in the second game. But then we rolled off 10 or 12 straight points to take a commanding lead.

“We had very good team passing and collectively the starters played really well.”

It was a typical dominating victory for the third-seed Wolverines.

“I do like being a third seed because you’re home all the way through (the playoffs) until the semifinals,” Skilins said. “And that’s helped us in the past. I would love to win all our home matches and then go to the semis.”

Playing at home is a definite plus, but it far from guarantees anything — especially this time of year.

“You always want to play to your seed, and fortunately most of the time we have played to our seed,” Skilins said. “The difficulty with being given that three seed, though, is you’re supposed to get to that semifinal. You’re supposed to beat everybody. But in the playoffs, that’s not such an easy order. So we have our work cut out for us.”

Skilins sat down with his team prior to the East Harlem game in an attempt to not focus on their opponent.

“They have reiterated to me, ‘Let’s not take anyone lightly this year,’” Skilins said. “In the past we have undervalued and overvalued teams, and we don’t want to do that this year. We want to take teams at face value and worry about what we’re doing on our side of the net. Not so much what they’re doing. We have had a history of sometimes looking across the net and becoming unfocused.”

That mentality worked flawlessly in their playoff opener, the coach added.

“I think we did that really well,” Skilins said. “We played our system the whole match. We had a pretty good offense, but I thought our defense really helped us.”

Their first-round victory now has the Wolverines set up for a second-round matchup with Long Island City on Nov. 13. LIC advanced by defeating Walton 23-25, 25-9, 25-18 in its playoff opener.

“I think they’re underrated,” Skilins said of the 14th seed. “But I like the fact that Walton took a game off them. I like to see when Bronx teams do well. But I think we match up well with them, and I think we’re going to play well against them. I think the girls are prepared and focused.”

Science’s next game was pushed to Nov. 13 because of a scheduling conflict at the school.

“The badminton championships are going to be held at Bronx Science on Nov. 12,” Skilins said. “You only have so much gym space, so they moved us to the day after, which is fine.

A victory over LIC would have Science playing on consecutive days with the third-round game set for Nov. 14.

“I like going back-to-back,” Skilins said. “If we play well Wednesday, it’s going to carry momentum into Thursday, and I feel really good about what kind of product we’re putting on the court right now.”