Cafe ‘buys’ farm, turns it over to customers 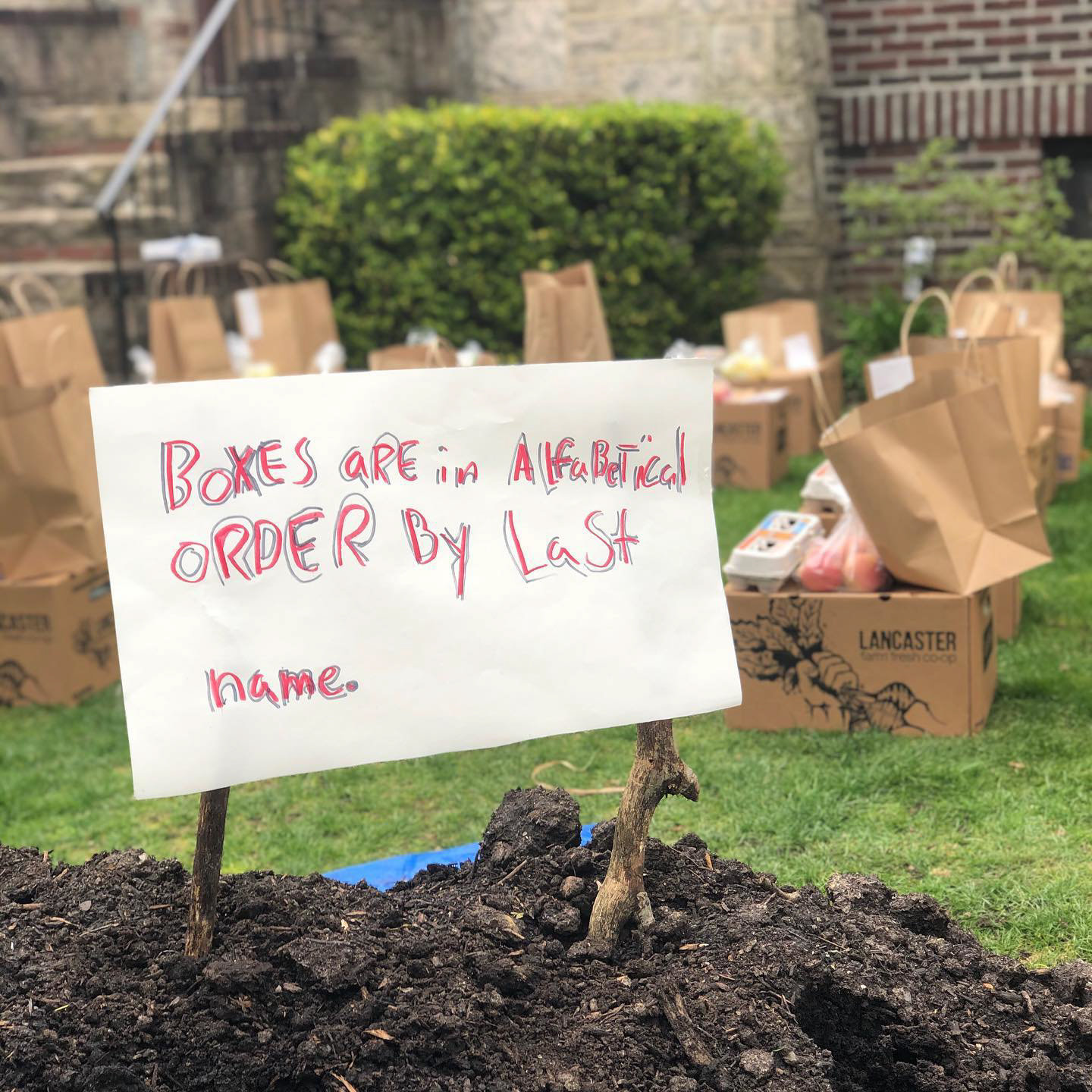 A sign informs customers that ‘farm boxes’ are organized alphabetically by last name. Moss Cafe owner Emily Weisberg has kept business alive by continuing to buy from the farms she used when her cafe was open, except now she’s selling produce directly to people.
Courtesy of Emily Weisberg 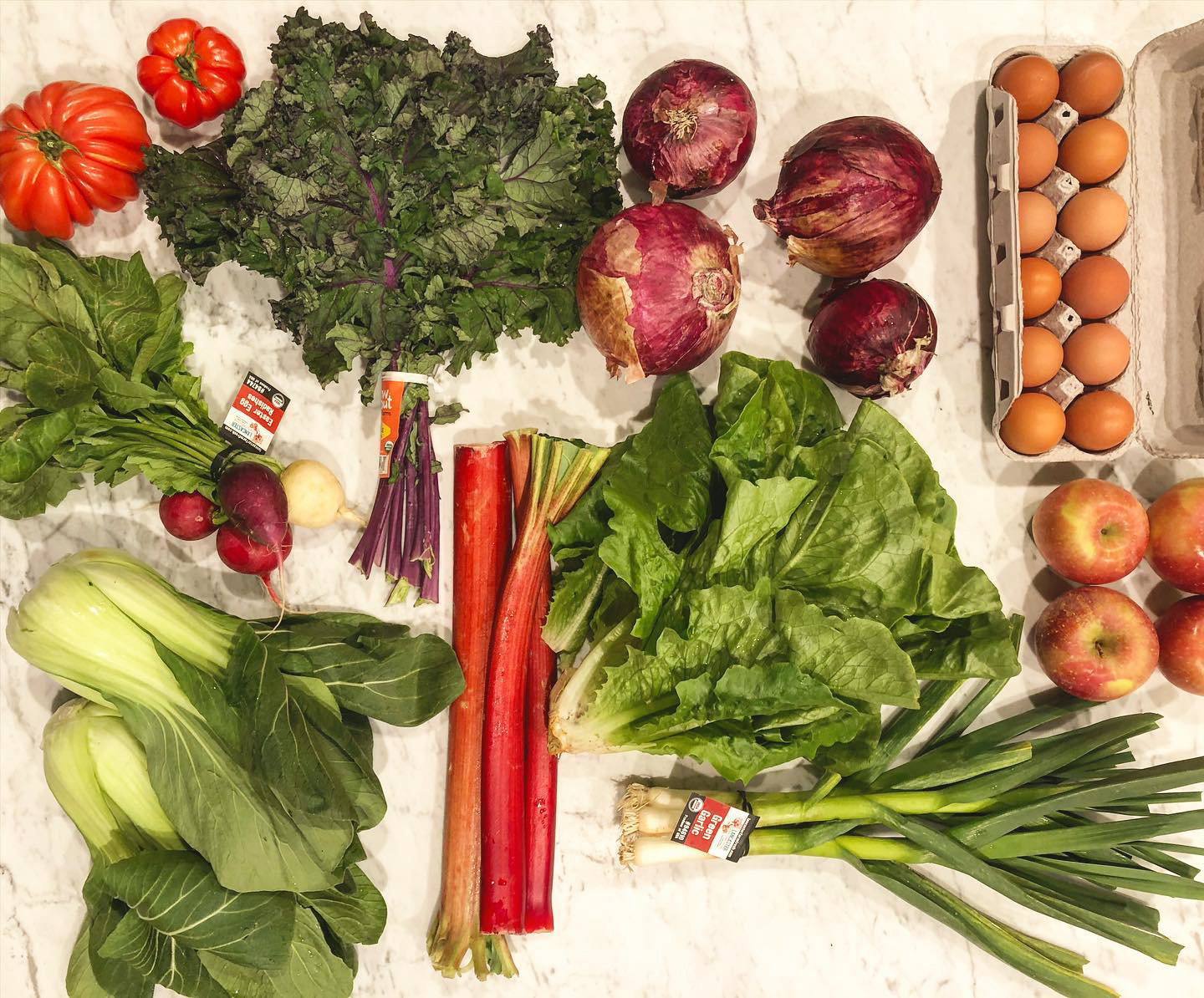 The ‘farm boxes’ Emily Weisberg sells have eight different vegetables and a carton of eggs. She crafted the boxes herself following the temporary closure of Moss Cafe on Johnson Avenue as a way to keep business going both for herself and the farms she normally buys from.
Courtesy of Emily Weisberg 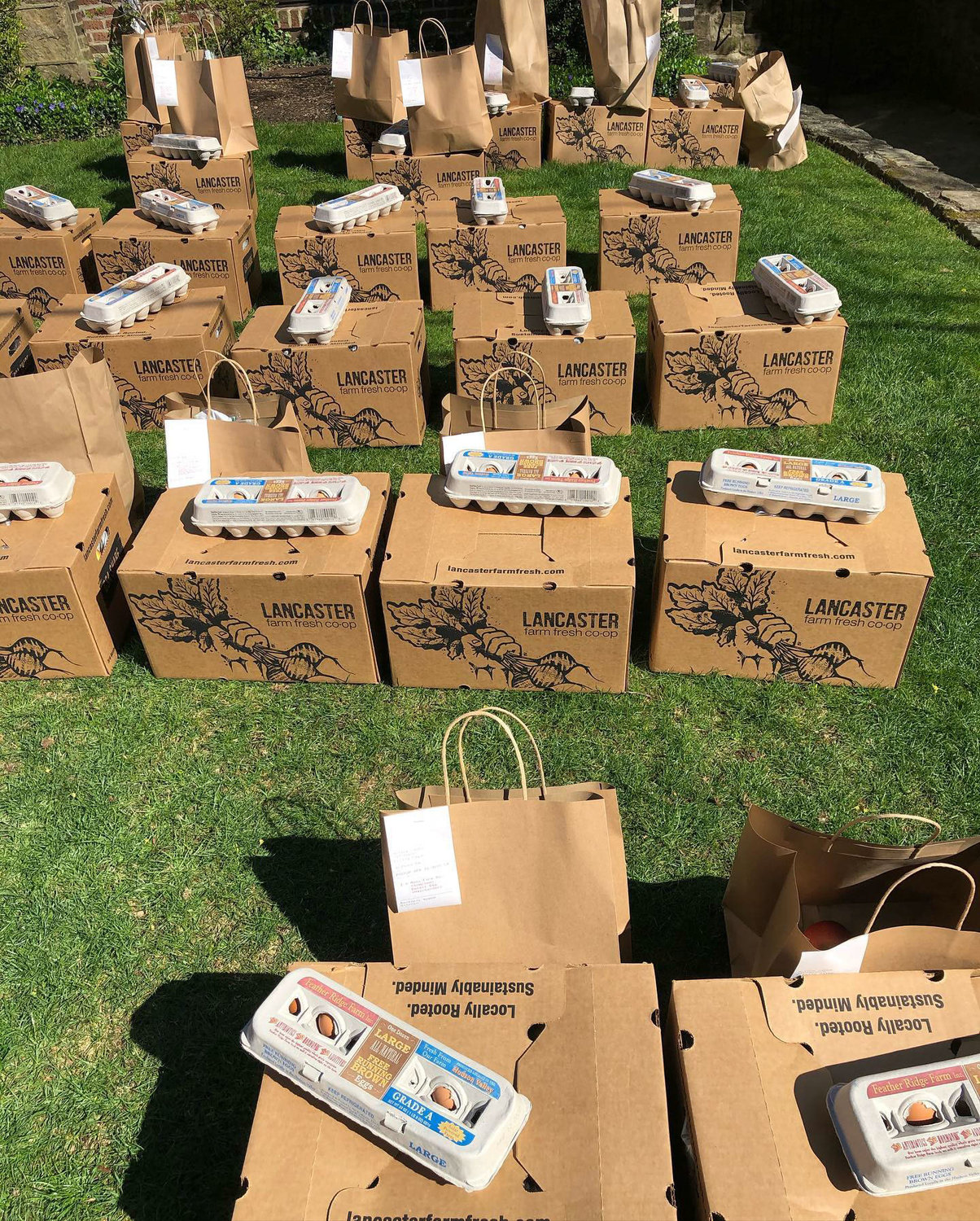 Moss Cafe owner Emily Weisberg has kept business alive by continuing to buy from the farms she used when her 3260 Johnson Ave., cafe was open. Now she sells produce directly to customers in the form of ‘farm boxes,’ which are filled with eight different vegetables and a carton of eggs.
Courtesy of Emily Weisberg 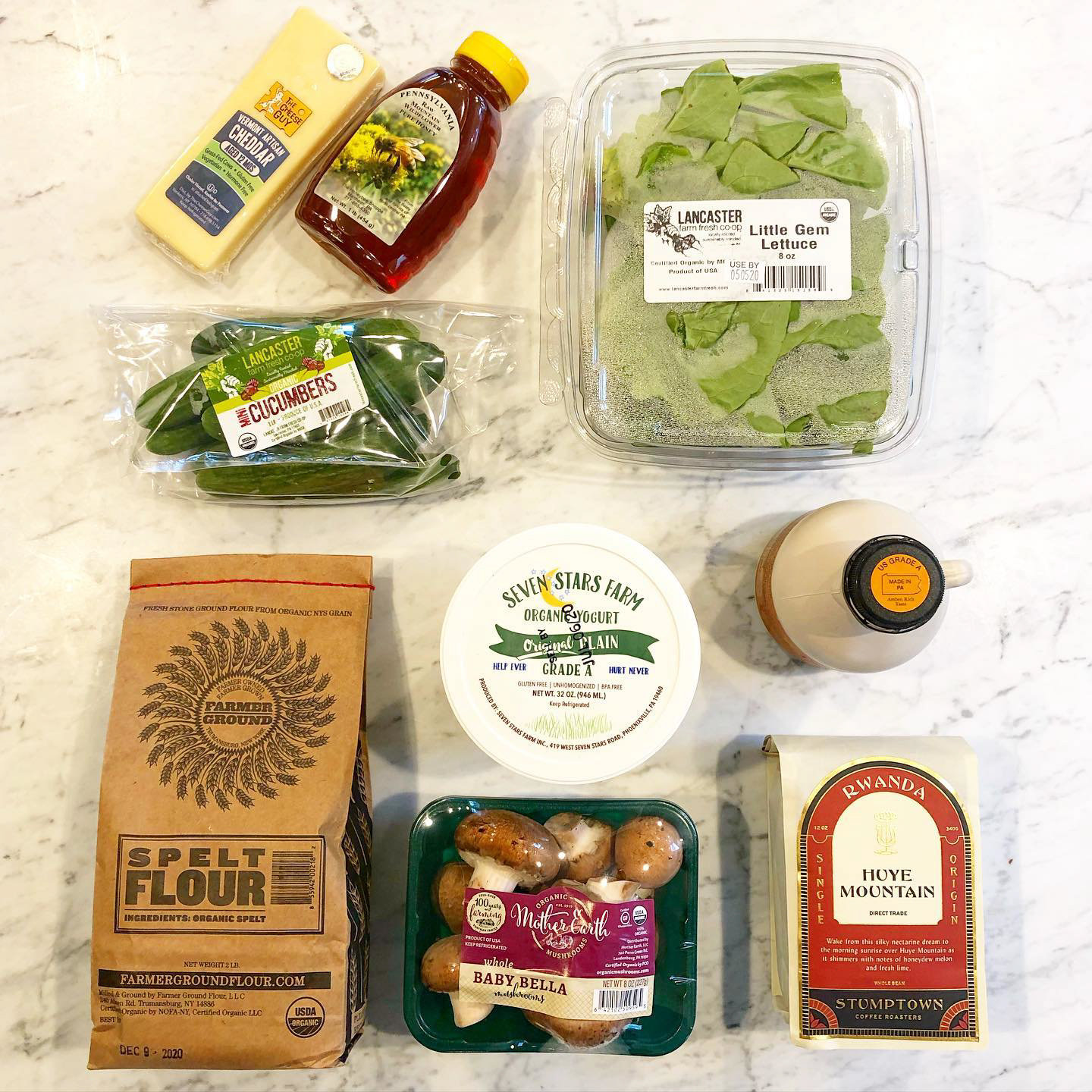 In addition to her ‘farm boxes,’ Moss Cafe owner Emily Weisberg also sells other products she sources from the same farms she worked with when her Johnson Avenue cafe was open.
Courtesy of Emily Weisberg 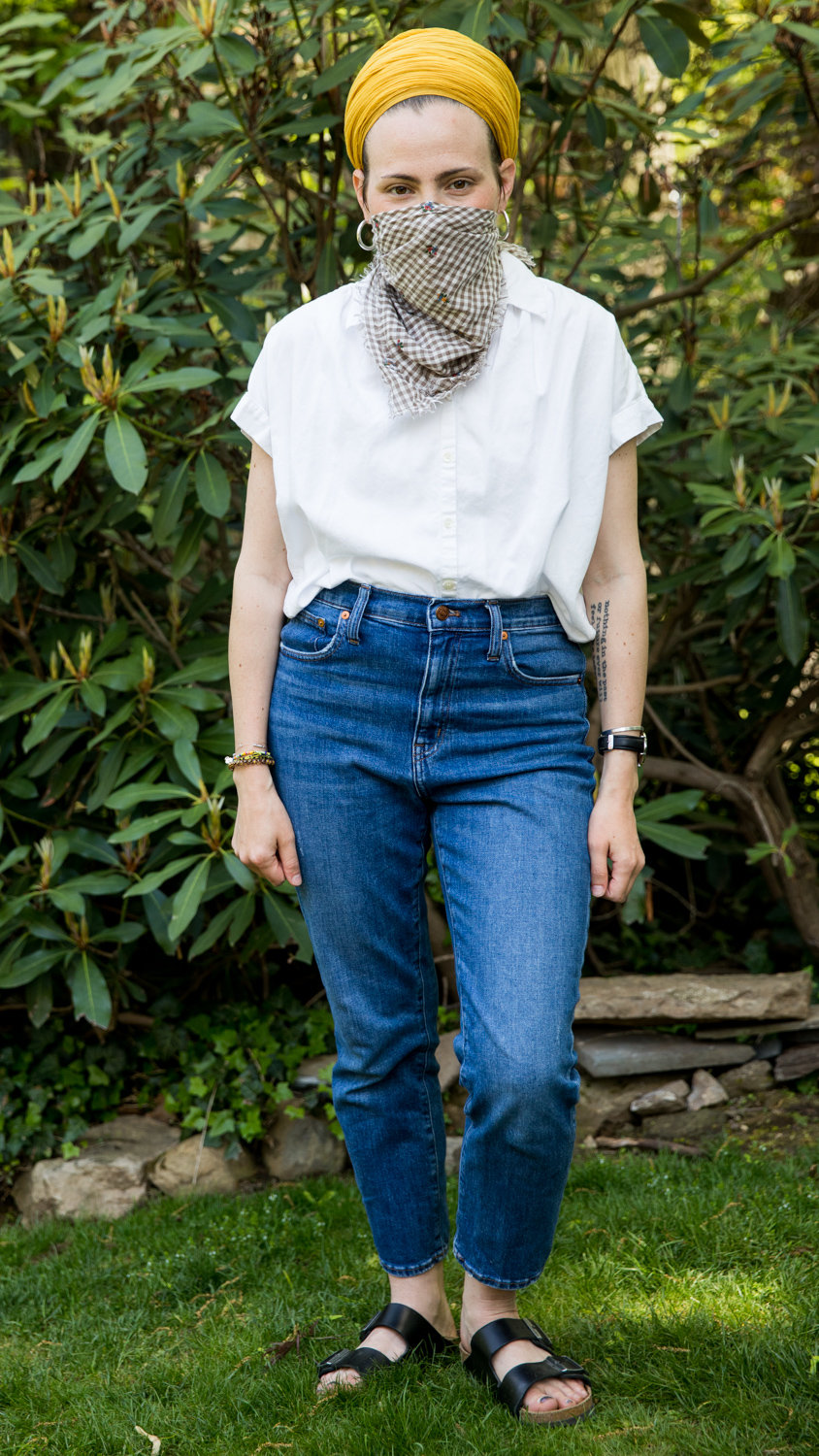 After she was forced to close temporarily, Moss Cafe owner Emily Weisberg figured out a way to meet the needs of her customers by turning the produce she would use in the cafe into ‘farm boxes’ for people who want to still eat fresh.
JULIUS CONSTANTINE MOTAL
Previous Next
By ROSE BRENNAN

When Moss Cafe shut down March 17, Emily Weisberg was left wondering what to do next.

The Johnson Avenue hotspot for farm-to-table kosher and vegetarian fare wasn’t spared from the mass closings of many New York City eateries. The ones who could stay open were forced to shift to delivery or curbside takeout.

Without traditional business hours and operations, Weisberg — Moss Cafe’s owner — knew she would have to get creative to weather the coronavirus storm.

But Weisberg had a secret weapon — one that made Moss Café popular in the first place. She had a close relation to local farms — farms with plenty of food ready to deliver. It was a connection that would make a difference for Weisberg — and the farms — for weeks to come.

As it became more and more clear the city — and the state — faced shutting down, there was an onslaught of “panic buying” at local grocery stores and supermarkets. But where many people saw uncertainty and panic, Weisberg saw an opportunity to get creative.

“What people were feeling really concerned about (was) how they were going to safely go to the grocery store and safely get food, and how they were going to get enough food,” Weisberg said. “We realized that we had this really vital connection in the food supply chain, which was that we could source directly from farms, which not even supermarkets are doing.”

And so, Weisberg channeled her resources and efforts into a new endeavor to bring farm-to-table food to the local community. The result? Farm boxes.

Each farm box is a collection of produce and goods from Moss Cafe’s business partners. The base components consist of eight vegetables and a carton of eggs, all sourced from local farms.

In addition, customers can also purchase “add-ons” to their boxes. They can include butter, milk, yogurt and flour, among others. In past weeks, rhubarb and coffee were notable guest appearances when it came to add-ons.

It’s a lot of farm boxes to fill each week — about 100 in fact — meaning Weisberg needed to call reinforcements. She originally enlisted her husband to help, but she’s since welcomed the return of two of her employees: Moss Café general manager Ben Alpern and chef Brian Engel.

Weisberg’s local farm connections proved to be a game-changer for many in the community. For one, direct sourcing means fewer hands touch the items from the ground to the farm box, greatly reducing the opportunities for contamination. At the grocery store, there’s no telling how many hands squeezed an avocado to see if it’s ripe before it makes its way into a customer’s shopping cart, she said.

The supermarket also can pose other risks. Social distancing guidelines can be difficult to follow inside those establishments, even with mask-wearing requirements and sporadic distance demarcations at checkout lanes. Nevertheless, the Bronx is a densely populated area, and the supermarket can reflect that.

To solve this problem, Weisberg distributes the boxes outdoors, leaving acceptable distance between them. She also organizes each box by customer last name so there’s minimal wandering when the customers arrive to pick up their boxes.

The farm boxes are essential to keeping Moss Cafe afloat until it is safe for the restaurant to reopen. Weisberg’s creativity is paying off in a time of crisis, but the unprecedented circumstances also presented her with a new set of challenges as a small business owner.

“So much of what we do in determining what’s right as a business is based on reasonable assumptions about how society works and what people’s actions are going to be,” Weisberg said. “Now everything is just entirely unpredictable.”

More than two months into the coronavirus pandemic, people are wondering when — if ever — society will go back to normal. It may be further away than expected, but that day could well be on the horizon.

Similarly, Moss Cafe may resume its usual schedule down the line, but the farm boxes — which came to be inside unprecedented circumstances — could be here to stay.

Because while the adverse effects of the virus that causes COVID-19 may fade away, the desire for fresh and delicious food won’t.

“If things are to go back to normal within the year, we would continue doing the farm boxes,” Weisberg said. “It seems like something people are really into.”