Campbell-Adams: A life, legacy of generosity 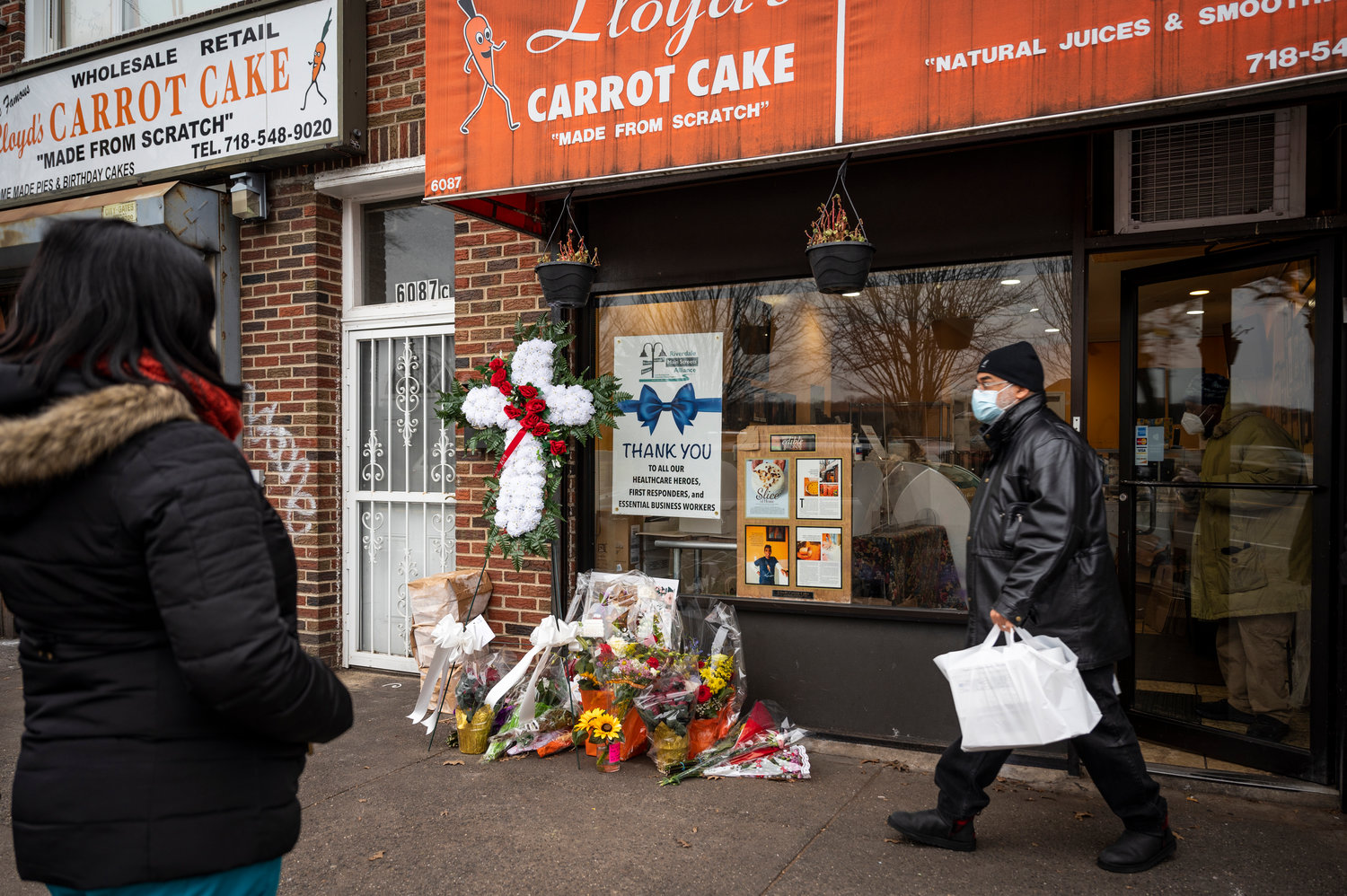 The community rallied around Lloyd’s Carrot Cake in the days following the death of its co-founder, Betty Campbell-Adams. Elected officials joined community organizations like the Female Fight Club in a vigil outside the bakery the evening after her death was announced.
HIRAM ALEJANDRO DURÁN 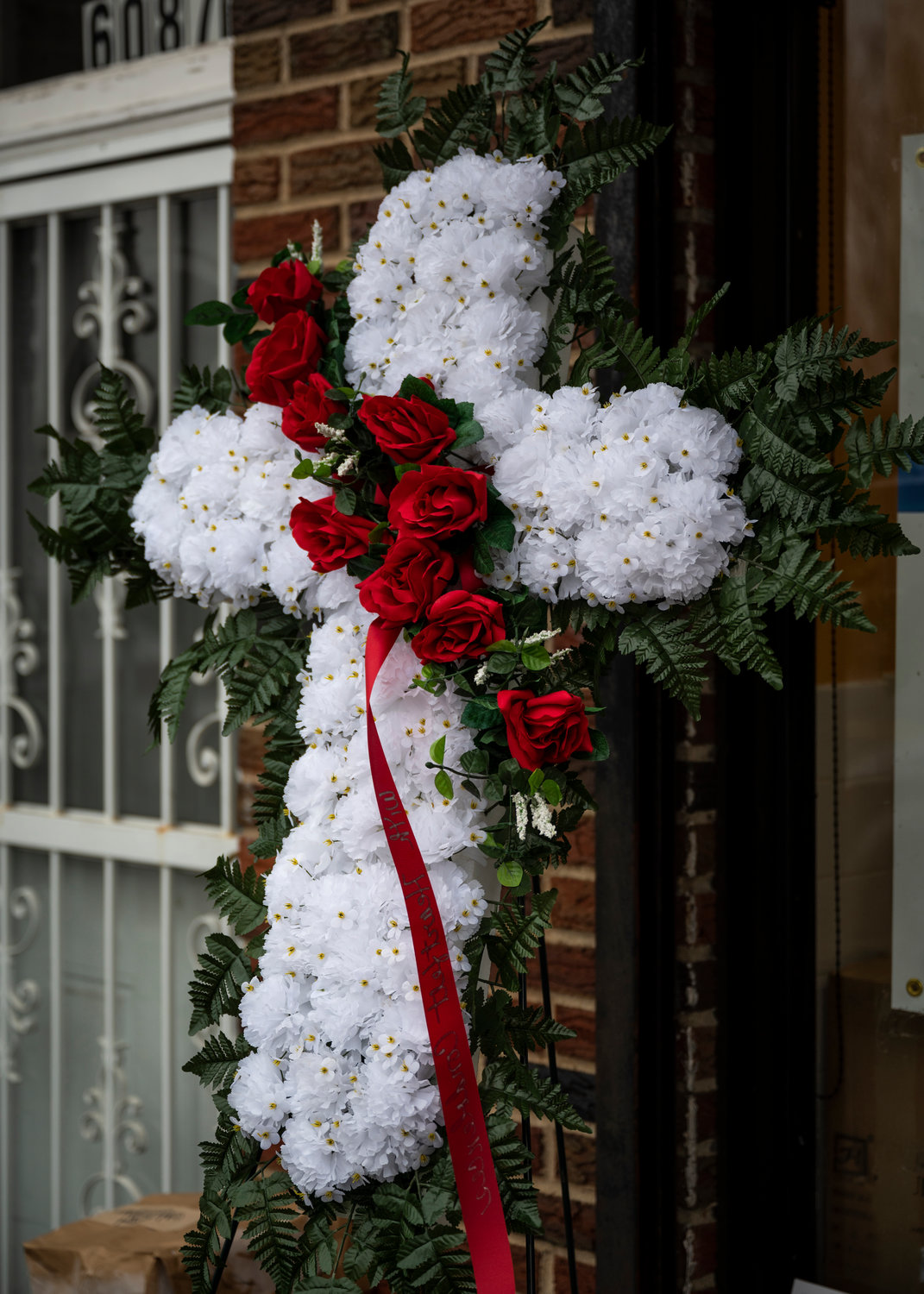 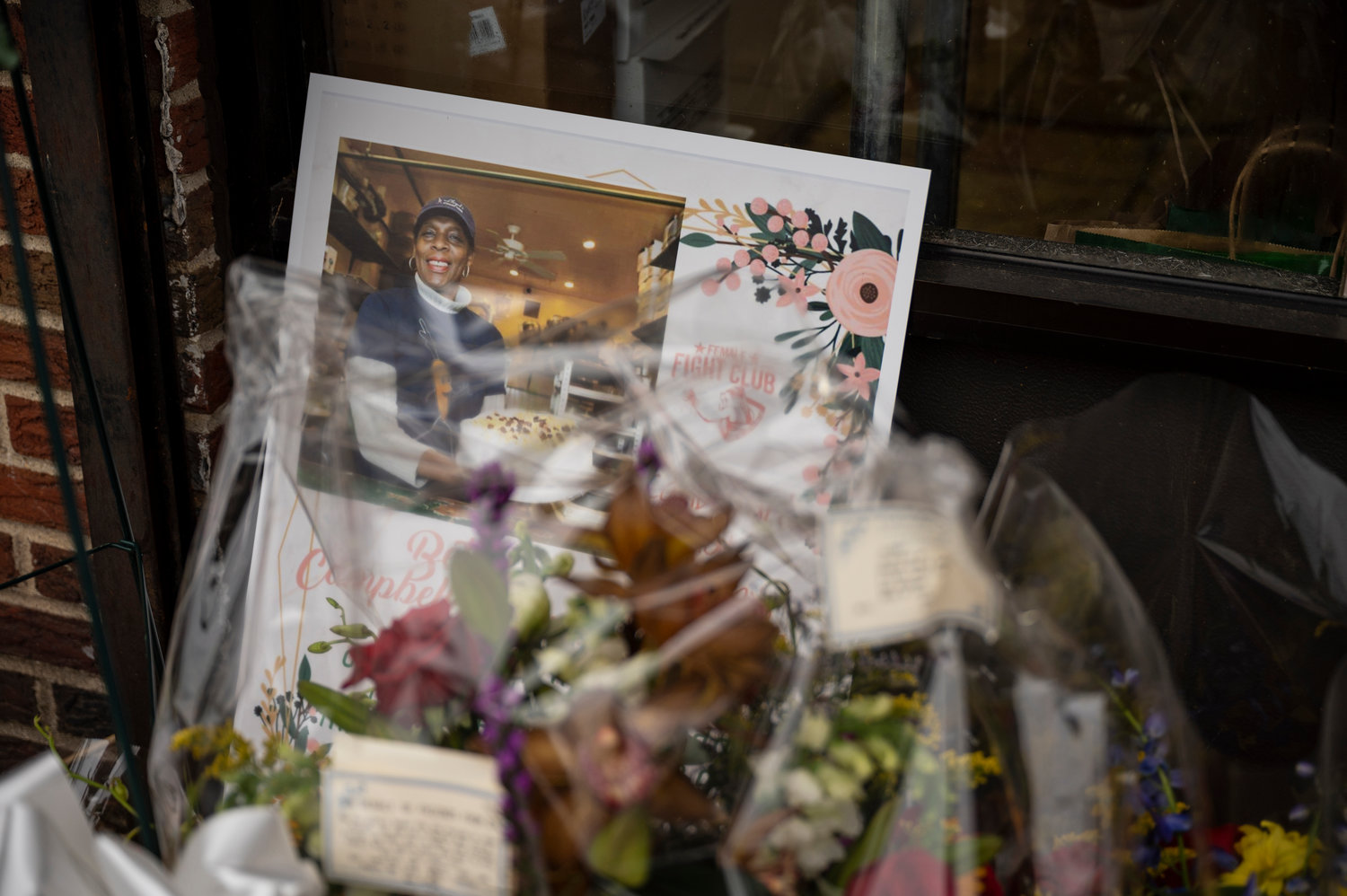 An image of Betty Campbell-Adams hangs at the back of a streetside memorial at Lloyd’s Carrot Cake. The bakery co-founder died earlier this month, but her legacy is still felt in many corners of the Bronx and Manhattan.
HIRAM ALEJANDRO DURÁN 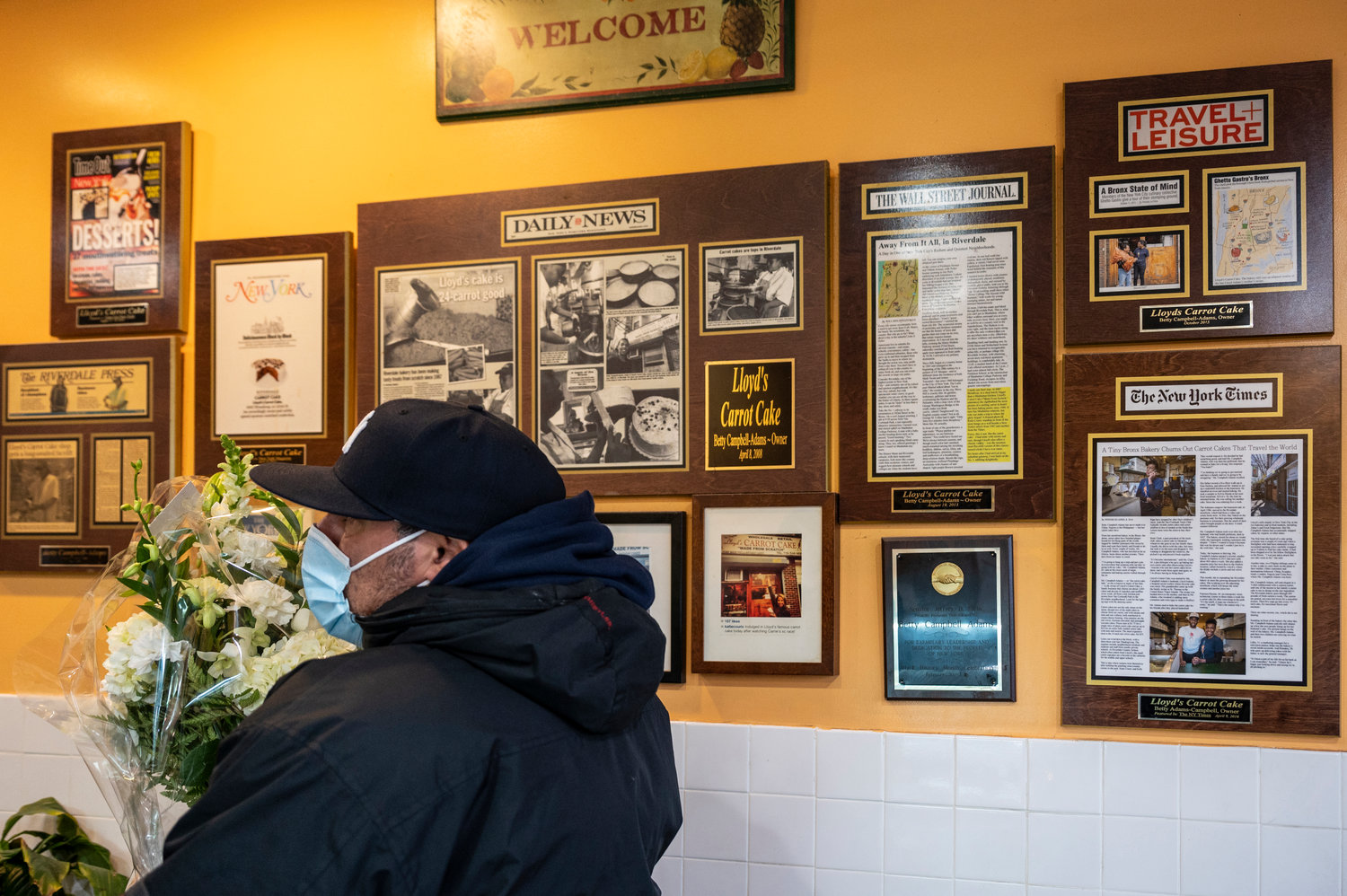 A man holds a bouquet of flowers intended for the grieving patrons of Lloyd’s Carrot Cake, standing in front of a wall celebrating the bakery’s media coverage from over the years. The bakery lost its co-founder, Betty Campbell-Adams, earlier this month.
HIRAM ALEJANDRO DURÁN 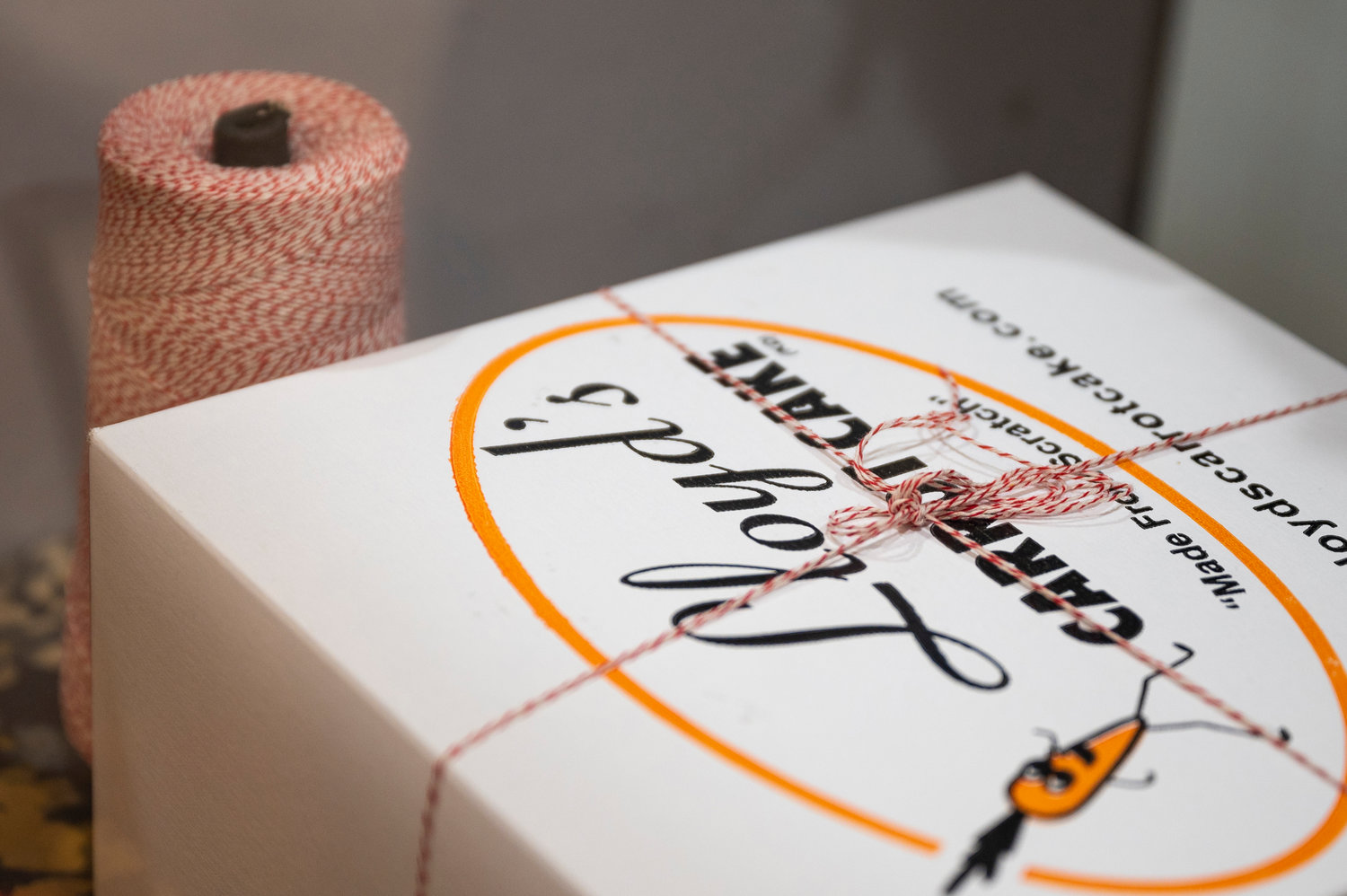 Assemblyman Jeffrey Dinowitz says he excuses indulging in Lloyd’s carrot cakes from time to time because carrots are ‘good for the eyes.’ The bakery’s co-founder Betty Campbell-Adams, who died earlier this month, was friendly with many community leaders.
HIRAM ALEJANDRO DURÁN 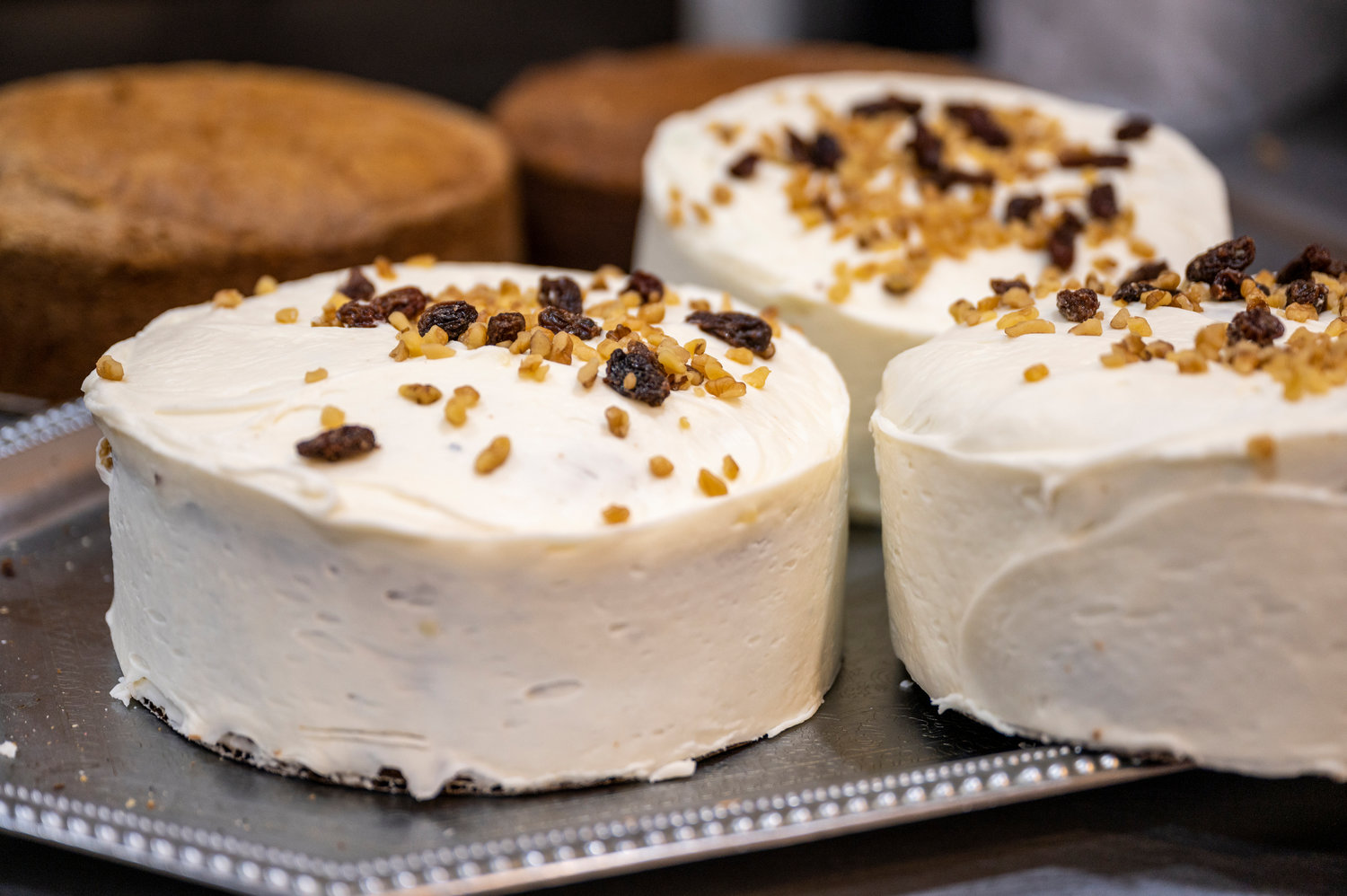 Lloyd’s Carrot Cake, unsurprisingly, is known for its mouth-watering cakes. But co-founder Betty Campbell-Adams’ importance to the community went beyond supplying it with dessert.
HIRAM ALEJANDRO DURÁN 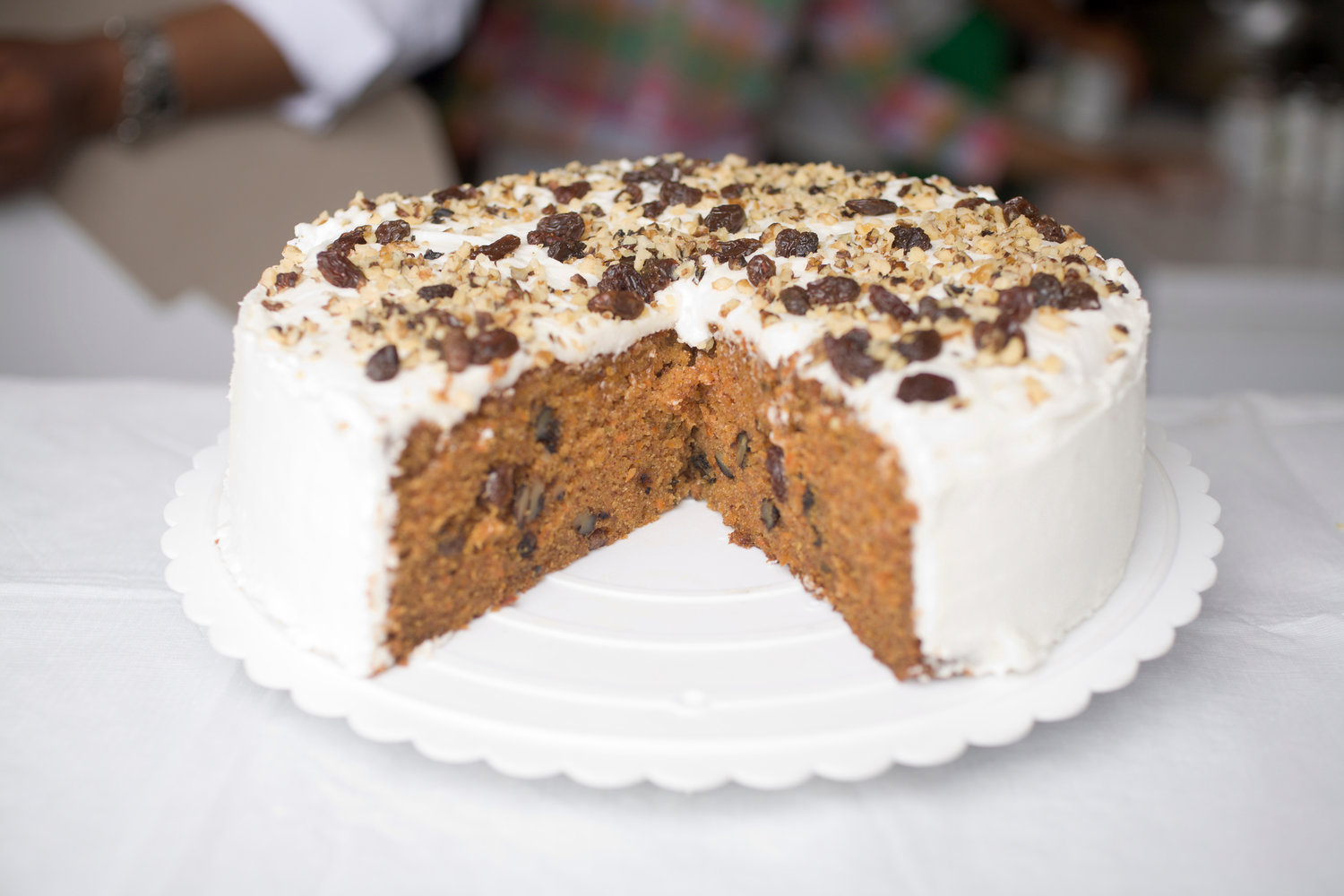 Lloyd’s Carrot Cake has been a North Riverdale institution since its opening in the 1980s. And although co-founder Betty Campbell-Adams died earlier this month, her children plan to keep her legacy alive through their family’s famed bakery.
Courtesy of Lauren Marsh Photography
Previous Next
By ROSE BRENNAN & ETHAN STARK-MILLER

It’s not too often someone’s first day on the job ends with a free cake to take home.

But it’s exactly what happened to former Riverdale Press politics reporter Will Speros. One of his first assignments for the newspaper in 2015 was to write a roundup of the prominent bakeries within the greater Riverdale area. And sure enough, one of the stops on the tour was the famed Lloyd’s Carrot Cake on Broadway, just across the street from Van Cortlandt Park.

Speros asked bakery owner Betty Campbell-Adams a few questions about her business. And after they wrapped up, she gifted him a delicious souvenir unlike any other: One of their signature fresh-baked carrot cakes.

Speros and then-photographer Adrian Fussell tried to politely refuse the cake — they couldn’t possibly take it without paying for it. But Campbell-Adams refused to let them leave empty-handed.

“We couldn’t talk her off,” Speros said. “She was like, ‘This is your cake. I’m giving it to you. This’ll be our secret.’ I met her for maybe 15 minutes, and she gave me a cake for just showing up.”

It might have been an unusual first day of work for Speros, but Campbell-Adams’ generosity was known to countless people not just in the Bronx, but across the city. And even beyond. It’s one of the things people say they will miss most about Campbell-Adams after she died Dec. 11.

Lilka Adams echoed the idea that her mother’s generosity knew no bounds. Adams, who will now run Lloyd’s Carrot Cake with brother Brandon, recalled her mother donating a kidney to her father Lloyd in 1998. That was enough to keep the bakery’s namesake alive through 2007.

The bakery always came first for her mother, Adams said. But time was still made for having fun. On weekends, Campbell-Adams would go out for dinner and dancing “with her girls.” And dancing was something Campbell-Adams loved to do.

“There’d be some times when we’d be in the store late at night,” Adams said. “I would bring my little speaker, and along with baking, we’d do a little two-step in the store.”

The evening after Campbell-Adams’ passing became public, members of the Female Fight Club exercise group that meets in the park across the street joined Assemblyman Jeffrey Dinowitz and others from the community outside the Broadway bakery to pay their respects with a vigil.

“You don’t see many businesses where the customers feel like true friends and family,” Adams said. “She was just so close-knit with everyone from the different organizations, like the Van Cortlandt Track Club, to even the different district members.”

Johanna Edmondson, founder of the Female Fight Club, had long known of Campbell-Adams’ legacy. But she got to witness it firsthand during the onset of the coronavirus pandemic. Edmondson’s exercise club would meet every morning at 8:30 in Van Cortlandt Park.

The steps leading down to the park often would be covered in litter, and the club’s members took it upon themselves to clean them up each day. Campbell-Adams would lend her own brooms to the club, Edmondson said, so they could exercise in a clean environment.

There are similarities between what she gave to the community during the darker days of the pandemic through her exercise club, and what Campbell-Adams gave. Edmondson says she provided the community a way to safely gather and lose a few pounds, while Campbell-Adams kept her bakery open for them to put those pounds right back on.

“I admired how nothing stopped her during the pandemic,” Edmondson said. “She kept baking her cakes, making sure that all the families in Riverdale had their desserts. They were counting on her to have the shop open, and she was going to commit to that the same way that I was doing it across the street.”

Campbell-Adams was a fixture in the community, Dinowitz said, who could always be counted on to show up whenever she was needed. And of course, like many others, he also loved her carrot cake, recalling an event at Bronx Borough Hall last year that included Lloyd’s.

“Of course, when I got there, I didn’t go to any of the restaurant-type businesses,” Dinowitz said. “I went straight to her table. I have to admit, I took home a slab of carrot cake.”

Although Adams and her brother both have full-time jobs in marketing, they want to keep both the Riverdale and East Harlem Lloyd’s locations going. While they expect to close for a couple weeks to figure out logistics, the hope is they can do what their mom did for so long: work full-time while at the same time running Lloyd’s.

“We just want to get through this holiday season, and then we’re looking to maybe just take some time to assess and come back even stronger in 2021,” Adams said. “We’re still in shock. But my mom would be like, ‘We still got to keep going.’”

“Got to keep going” was the mentality her mother had about most things, Adams said. Campbell-Adams lost her mother in 2007 — the same year that she lost Lloyd. Yet she still found the strength to take the reins of the business and build it into what it is today.

“Thirteen years later, we’re bigger, we’re better, we’re closer with our customers,” Adams said. “The person that I have to thank the most would be my mom, because she was the foundation that helped build the business to where it is now.”