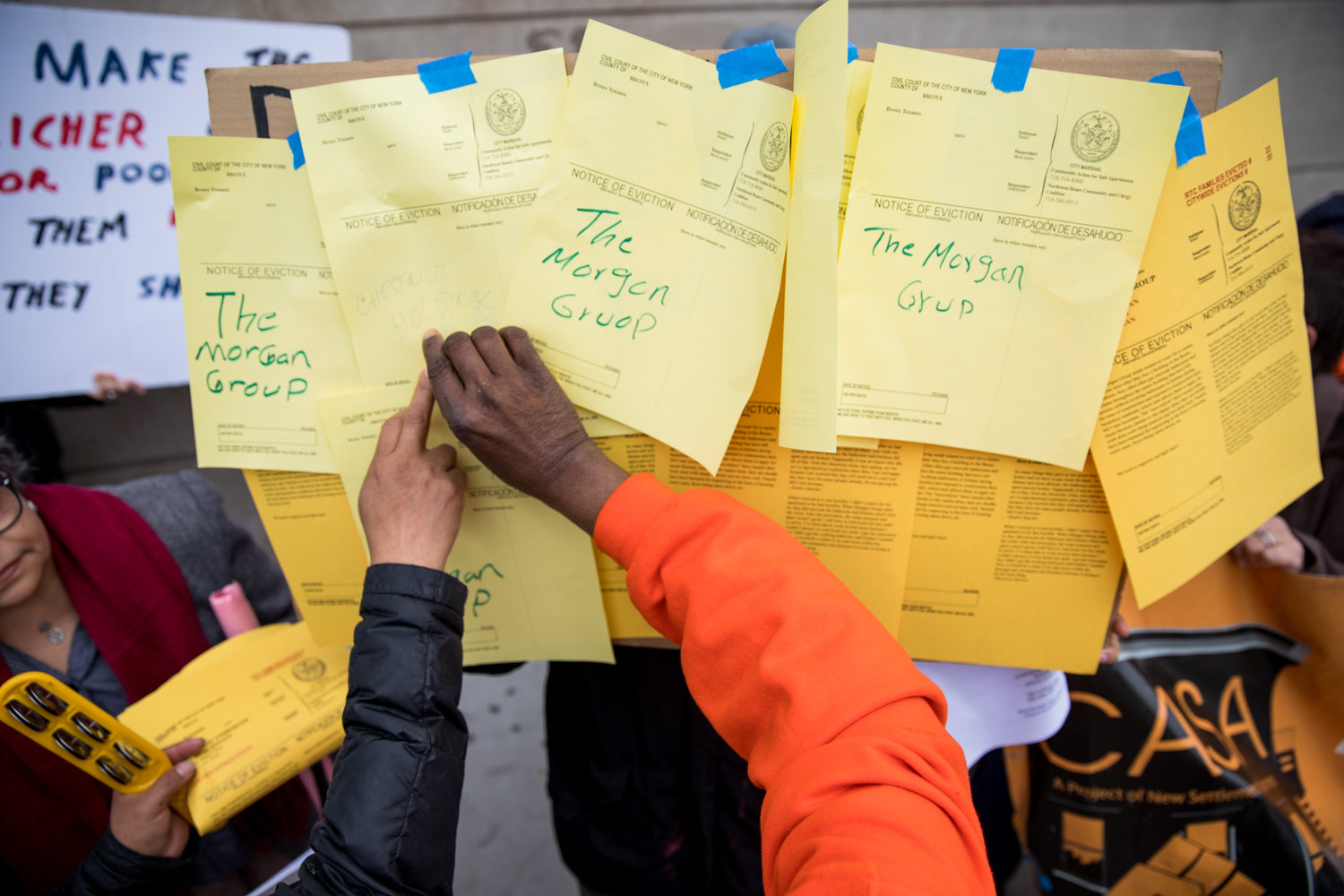 Protesters paste up mock eviction notices for landlords dubbed the borough’s ‘worst evictors’ by tenants rights groups during a rally outside the Bronx Housing Civil Court on the Grand Concourse last year. Since the advent of the coronavirus pandemic, renters have worried how they might make rent and what the ramifications would be if they can’t.
JULIUS CONSTANTINE MOTAL / File 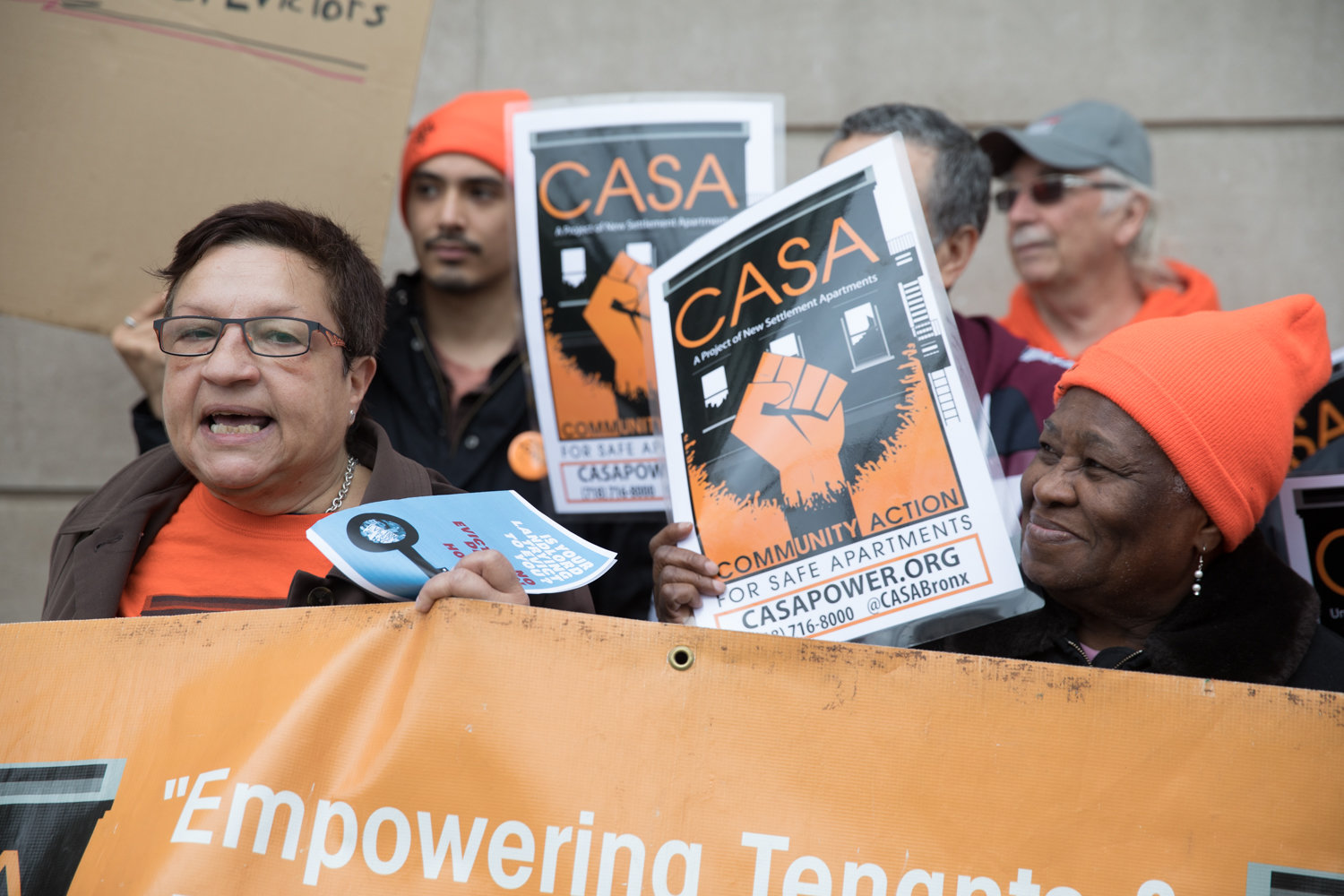 Members of Community Action for Safe Apartments voice their frustration over landlords dubbed the borough’s ‘worst evictors’ by tenants rights groups during a rally outside the Bronx Housing Civil Court on the Grand Concourse last year. Eviction has become a renewed concern since the advent of the coronavirus pandemic, especially for tenants who may be unable to make rent.
JULIUS CONSTANTINE MOTAL / File 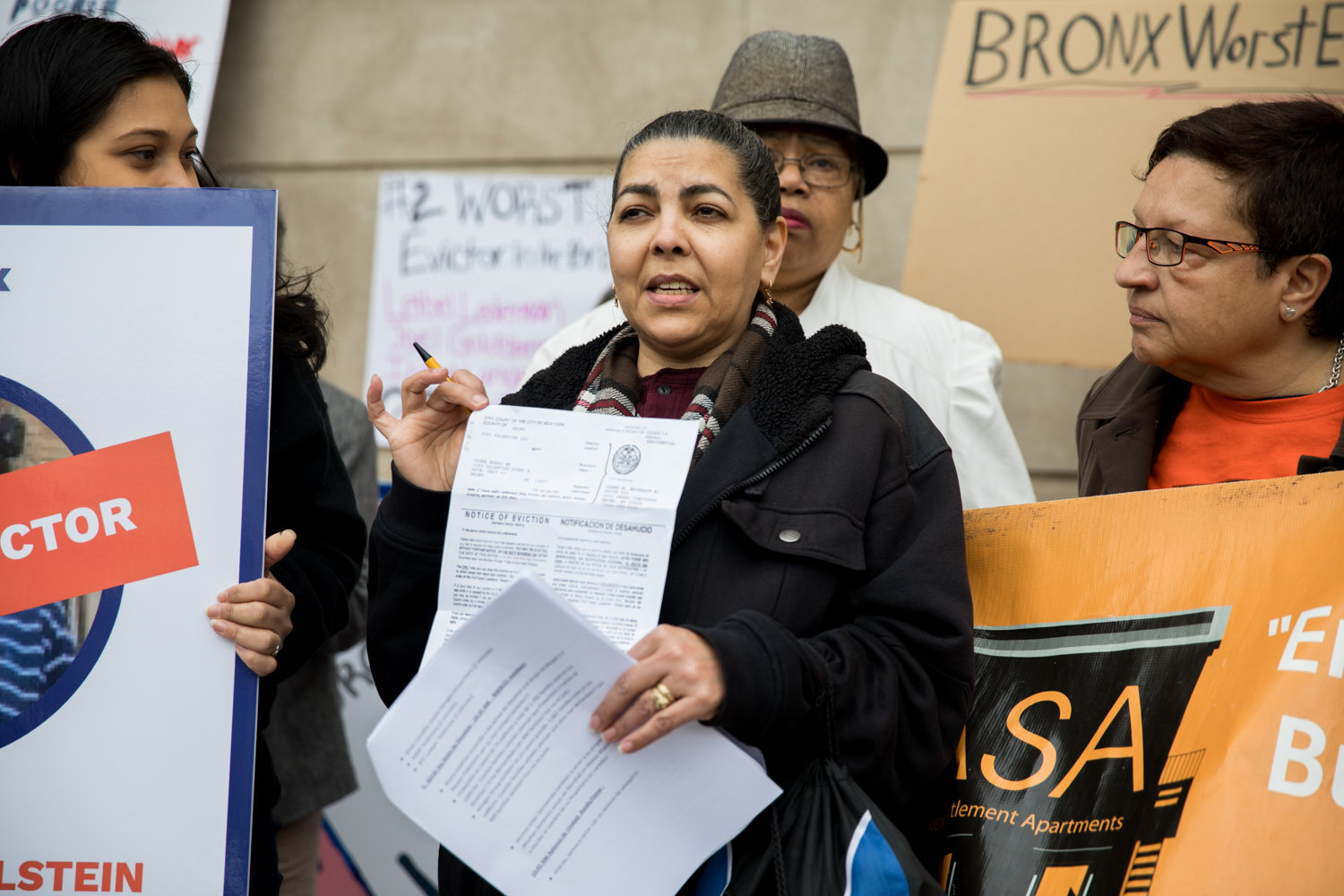 Digna Nuñez holds up an eviction notice she received, sharing in Spanish her experience with her landlord during a rally outside the Bronx Housing Civil Court last year. Since the advent of the coronavirus pandemic, renters have worried about how they will make rent and what the ramifications will be if they can’t.
JULIUS CONSTANTINE MOTAL / File 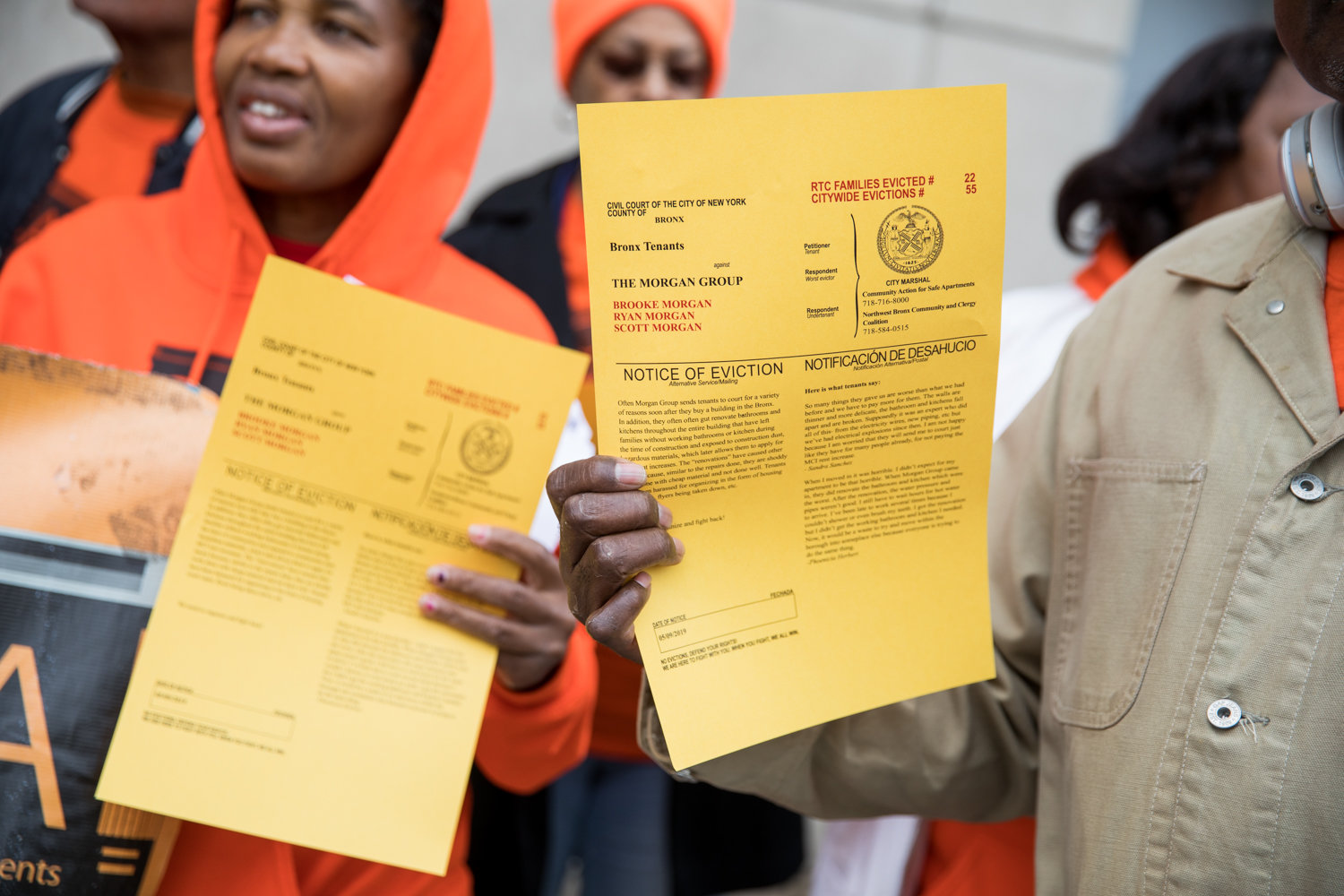 Protesters hold up mock evictions notices for landlords they say are notorious for evicting tenants in the borough during a rally outside Bronx Housing Civil Court last year. Eviction has become a renewed concern since the advent of the coronavirus pandemic, especially for tenants who may be unable to make rent.
JULIUS CONSTANTINE MOTAL / File 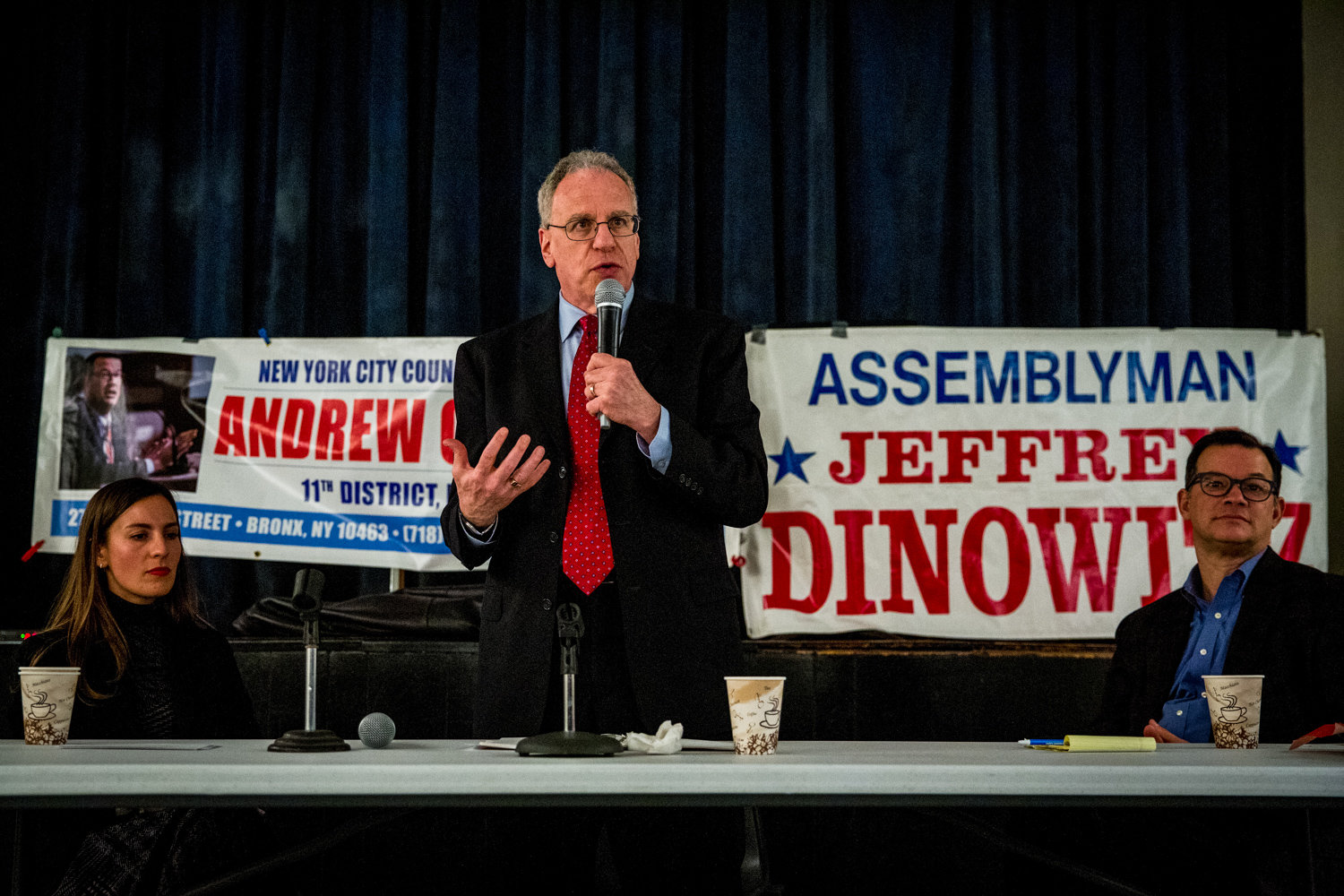 Assemblyman Jeffrey Dinowitz has introduced the Tenant Safe Harbor Act that he says will protect renters from eviction who can’t pay not only through the coronavirus crisis, but another six months after it’s resolved.
EIAN KANTOR / File
Previous Next
By KIRSTYN BRENDLEN

April 1, 2020, was dramatically different from the April 1 of decades past.

New York City is largely quiet, with businesses closed and people staying home in light of the coronavirus pandemic that grips the nation.

Yet, some things remain the same, like paying rent. Except as millions apply for unemployment nationwide for the first time, there are many who won’t be able to cover the check.

As part of his overall shutdown of “non-essential” businesses last month, Gov. Andrew Cuomo also instituted a moratorium on evictions. While it doesn’t compel landlords to waive or reduce rents during the pandemic, it does stop them from removing tenants who might not be able to pay right now.

The goal is to stop the streets being flooded with new homeless because of the current economic struggles, making it much harder to enforce social distancing and other “shelter-in-place” practices designed to curb the spread of the coronavirus that causes COVID-19. The original plan, however, was designed to prohibit evictions for just 90 days. That means beginning June 20, if someone doesn’t have their rent for that month — or any other months they’ve missed during the pandemic — they could find themselves without a place to live.

While it seems new infections and hospitalizations are leveling off in New York, it’s become clear to some lawmakers like Assemblyman Jeffrey Dinowitz that the 90-day moratorium just isn’t enough.

Looking for a little more time

Dinowitz partnered with state Sens. Brad Hoylman and Liz Krueger to introduce the Tenant Safe Harbor Act, intended to extend the moratorium on evictions for non-payment of rent until the end of the current state of emergency in New York — and for six months after the emergency declaration is lifted.

The standing moratorium is a “ticking time bomb,” Dinowitz said, since non-essential businesses are expected to remain closed until at least April 29. Meanwhile, some applying for unemployment in New York have said that the task is akin to a full-time job as the state website struggles to handle the new traffic and process claims.

While he expected some landlords might struggle with the legislation, Dinowitz believes protecting tenants from becoming homeless in the middle of a crisis is much more important right now. Still landlords will have a chance to recoup losses after the fact since they’ll still have a claim on unpaid rent when the state of emergency is lifted.

Such a bill will work well with Cuomo’s 90-day mortgage relief program, the Assemblyman added, which allows those paying mortgages a chance to waive payments if certain criteria related to the coronavirus are met.

Some homeowners, however, have found that relief a little more challenging to access, Dinowitz said.

“Whether it’s an individual who lives in a co-op or a landlord who has a mortgage, I think they should be able to access the type of relief that we thought they were going to be able to access,” he said. “Apparently, it seems much more difficult than was originally touted.”

Mortgage relief so far has only been available for single-family homeowners, not for small commercial businesses or landlords of multi-family homes, leaving some who had hoped for relief without options.

Those measures might help both people who own private homes and small landlords who are trying to extend such relief to their tenants.

Thinking about renters, too

For many in the city, the promise of mortgage relief won’t cut it. New York is the home of millions of people who rent space, and many of those people are struggling to pay rent.

The Housing Justice For All advocacy group hosted a digital news conference April 1 to announce the release of what it’s calling its rent strike toolkit, which provides instructions on how to organize a rent strike within a building and communicate the needs of tenants with their landlords.

The toolkit is just part of the organization’s campaign calling for a rent moratorium.

“We are in the midst of an unprecedented public health crisis,” said Winsome Pendergrass, a tenant organizer with Housing Justice. “That has put all of New York on lockdown. Still we are reaching out for people who are frightened, are renters, all across the state.”

As many as 39 percent of New Yorkers don’t have enough money for one month’s rent, Pendergrass said. Those renters would be unable to pay without their usual income.

“This is something that we have been echoing for the longest while,” she said. “Because the rent is too damn high, we can’t save anything for emergencies such as this. So now the chickens have come home to roost.”

Elan Cohen, a tenant leader with Woodside on the Move, a Queens-based tenants rights organization, gathered neighbors in his apartment building to craft a letter to their management company asking for relief as neighbors lost their jobs or started receiving reduced income.

“The truth is, whether we can work from home or not, in the upcoming weeks and months and perhaps over the next year, we will all have to make difficult financial decisions that will impact us for a very long time,” Cohen said.

“My hope is that, in the short term, doing our best to conserve our financial resources will allow us to make a better recovery in the long run.”

He believed that was true for renters and landlords, but still, some tenants are too hung up on the short-term implications of rent and mortgage moratoriums.

“I personally think that landlords, generally speaking the ones that could do it, should have waived everybody’s rent for the month of April,” Dinowitz said. “Most buildings in New York City, for example, are owned by these big conglomerates now.”

While smaller landlords might struggle to waive rent, larger companies likely have cash reserves that would allow them to cover for a month, or even two.

“But, you know, I guess that’s expecting too much of them,” the Assemblyman said.

But residential renters aren’t the only ones on Dinowitz’s mind. Commercial property also is threatened, especially in retail hotspots like Johnson Avenue, where closed doors and piling up delinquent rent could create even more empty storefronts.

“If they’re paying rent for a few months and they’re not doing business, some of them are going to go under,” Dinowitz said.

“That’s in nobody’s interest. Do the landlords really want a number of their tenants to disappear? How could they possibly want that?”