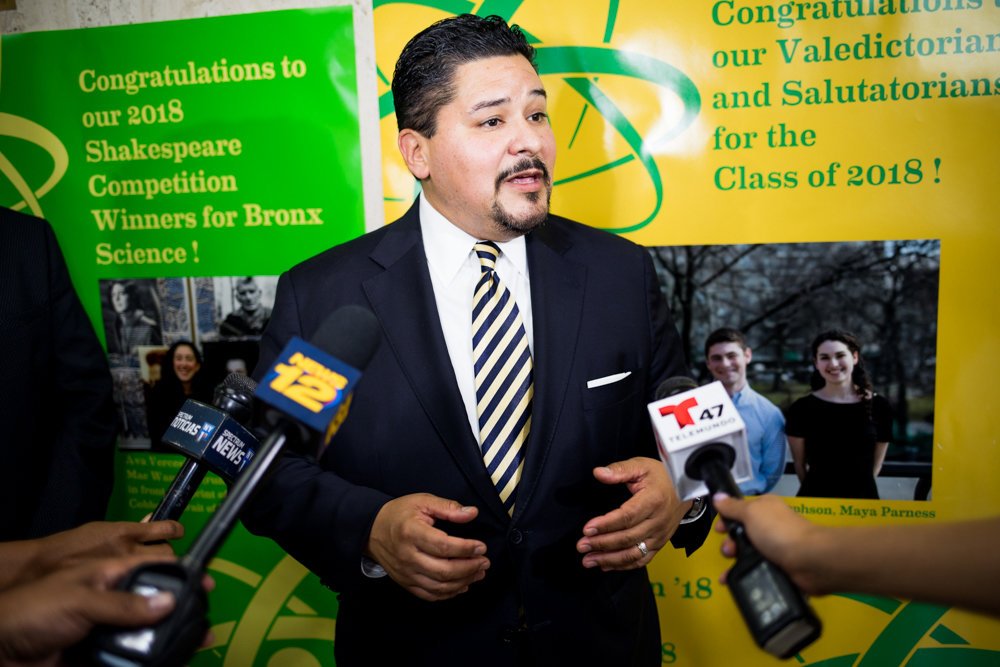 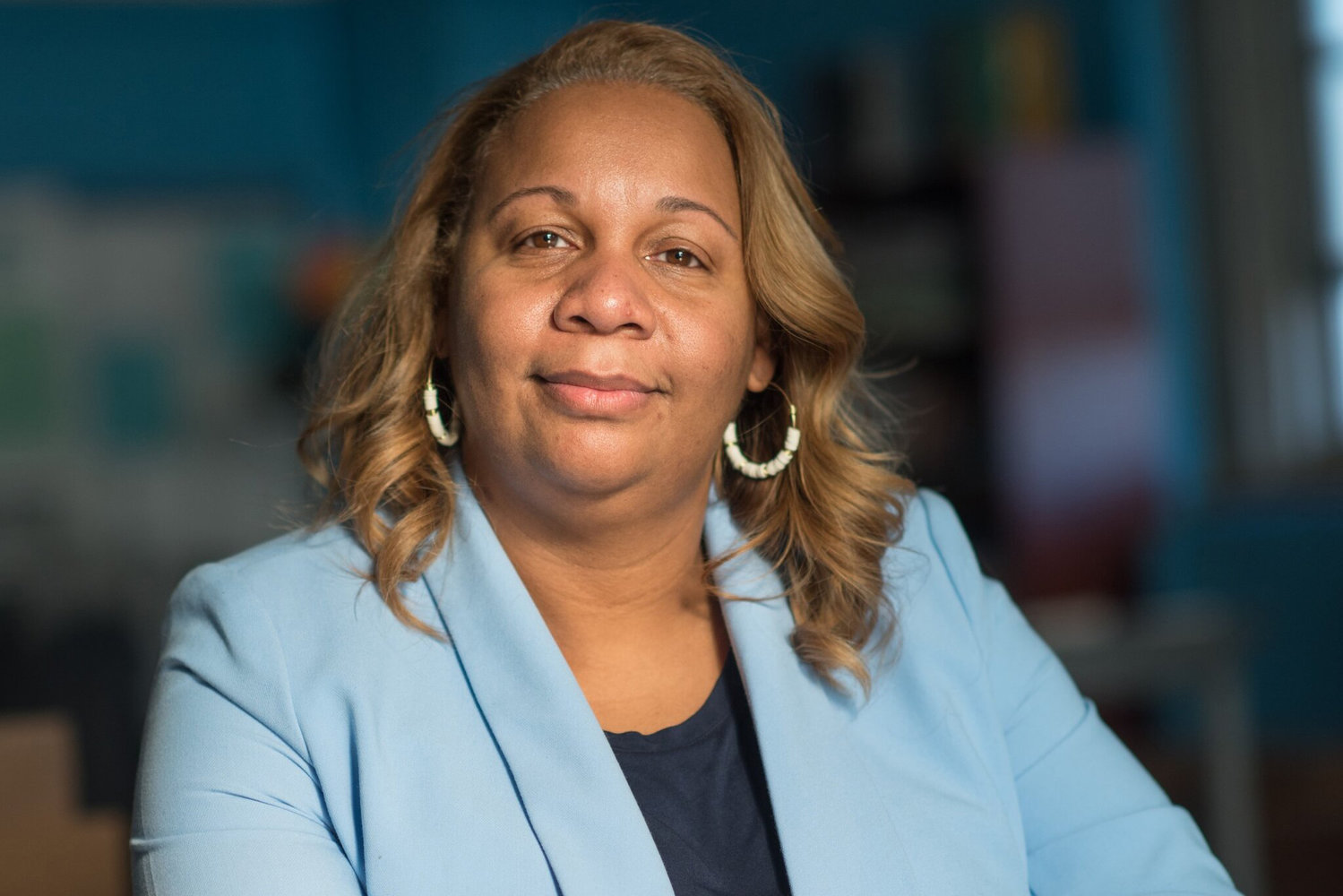 Bronx superintendent Meisha Porter will become the city's schools chancellor later this month. She's stepping into the role after Richard Carranza announced his resignation at the end of February.
Courtesy of New York City Department of Education 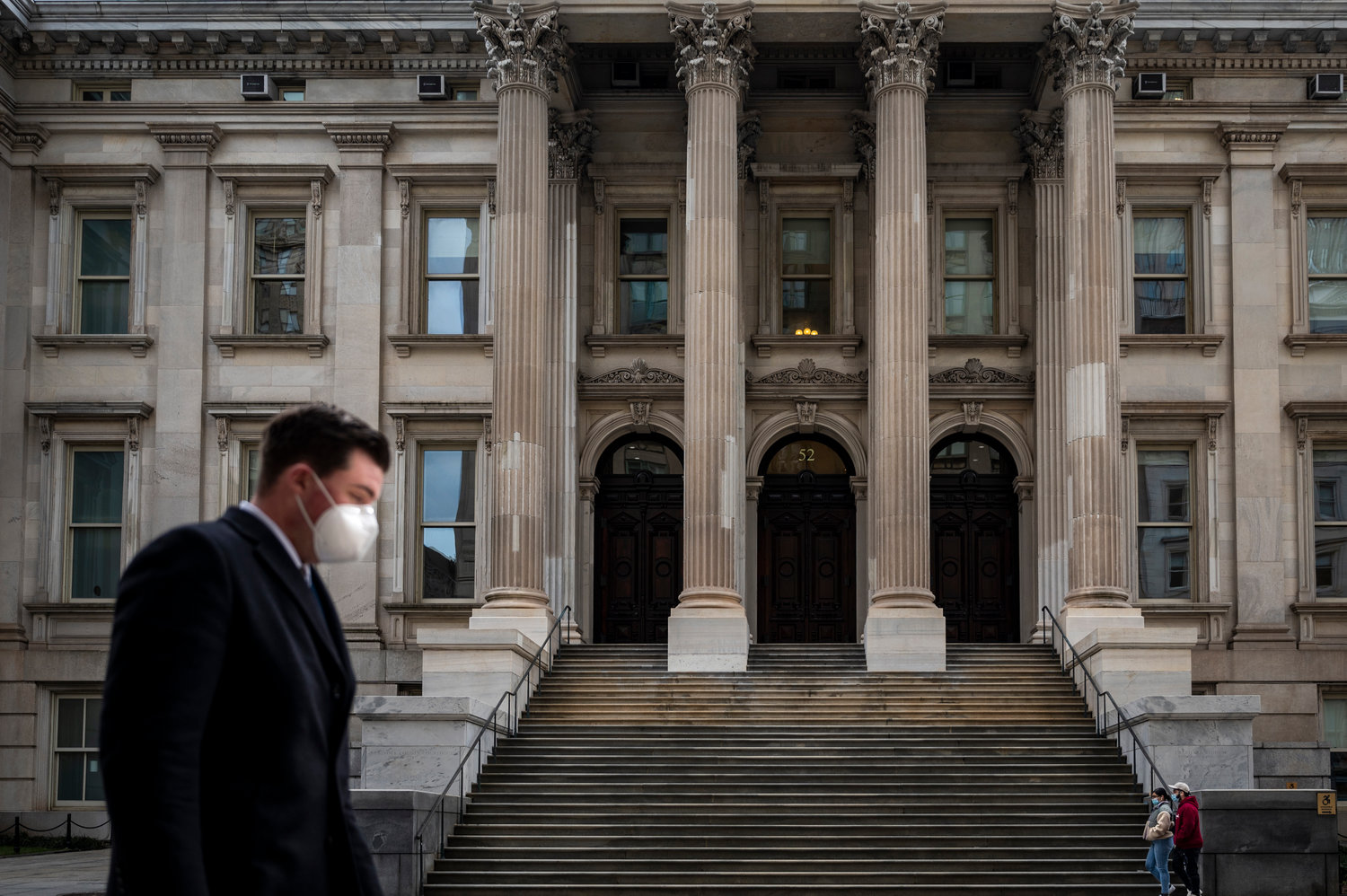 Schools chancellor Richard Carranza steps down March 15 and will be replaced by Bronx superintendent Meisha Porter — the first Black woman to hold the position.
HIRAM ALEJANDRO DURAN
Previous Next

‘In this moment of crisis, it becomes clear that the whole system is rotten. My hope is that we can do some really progressive things in the next couple of months.’”
Alexandra Haridopolos
By ROSE BRENNAN

The past year has been challenging for many. But that’s probably especially the case for Richard Carranza.

The schools chancellor says he lost 11 friends and family members to the coronavirus pandemic. That’s devastating in and of itself. But Carranza had something else massive on his plate: Managing the closing and reopening of the nation’s largest public school system.

It was an ongoing and daunting process, but Carranza won’t see the system’s full reopening to fruition, as he announced he is stepping down. His successor, Bronx superintendent Meisha Porter, will take over on Monday.

The timing of Carranza’s resignation might seem odd. While grief has no timeline, he’s leaving while the city’s public high schools are still learning fully remotely — although they’re on track to reopen later this month. And there’s a highly publicized mayoral race taking place, meaning Porter probably will serve as chancellor only until the end of the year, when a new administration will take charge and likely appoint someone new to the role.

But while the timing might seem strange, many think Carranza’s departure was a long time coming. He and Mayor Bill de Blasio clashed on a number of issues, including school desegregation efforts, according to published reports. Notably the gifted and talented program. While de Blasio wanted G&T admissions to move forward as usual this year ahead of potential revisions for after he leaves office, Carranza wanted to abandon testing for the program altogether.

Ultimately, the city decided not to administer G&T tests this year, opting instead for a lottery system among students recommended by pre-K teachers, or those who sit for an interview with admissions teams.

Critics have claimed testing ultimately leaves many potential students out of G&T programs because they don’t have the same access to costly prep materials students from wealthier families have.

For Carranza, differing beliefs on school desegregation proved to be the final nail in his relationship with de Blasio, the ultimate decision-maker on those issues.

There’s some excitement for Carranza’s soon-to-be successor, however. Porter will be the first Black woman to lead the city’s schools. She’s worked within the city’s education department for decades — whether as a teacher, principal or superintendent — making many think she has firsthand experience of the important issues facing the school system.

The excitement hasn’t been so grand for Carranza, who has found critics from several places, including the city’s largest educators union — the United Federation of Teachers. Union president Michael Mulgrew, who’s also a member of UFT’s Unity caucus, said Carranza was often fighting for safety during the coronavirus-era school reopening process, even when cameras weren’t on him.

“Richard Carranza was a real partner in our efforts to open school safely,” Mulgrew said, in a release. “Too often he had to fight behind the scenes to keep the needs of students, staff, and their families ahead of politics.”

But some of the union’s other caucuses had a more tumultuous relationship with the chancellor. While the Movement of Rank-and-File Educators caucus — also known as MORE — praised Carranza’s desegregation efforts, they differed greatly when it came to reopening.

Alexandra Haridopolos, an English as a new language teacher, said her school building didn’t have a proper ventilation system but was still required to re-open for in-person learning.

While MORE may have opposed certain aspects of the chancellor’s school policies, Haridopolos believes Carranza’s resignation might have effects rippling beyond that.

“In some way, I am really grateful to him because he really exposed the need to end mayoral control,” Haridopolos said. “Even somebody with the ideals of equity and creating more healing-centered schools … with the structure we currently have (with) mayoral control, the chancellor constantly had his hands tied by de Blasio.”

The union’s Solidarity caucus, however, had far fewer kind sentiments for Carranza.

“This past year-and-a-half has been a turbulent time, and it’s a hard time to be a leader of any school district,” caucus leader Lydia Howrilka said. “However, we think that the lack of care that Chancellor Carranza took in making sure our teachers were safe — our staff and students were safe — his failure to close schools last March promptly, was just clearly unethical. He’s angered a lot of parents, and he led many parents and union members to feel like their lives and their health did not matter at all.”

Both Haridopolos and Howrilka looked forward to Porter’s leadership, however, although Howrilka worries about her lack of actual teaching experience.

Haridopolos has higher hopes. As one of MORE’s main tenets is social justice, Haridopolos was impressed by Porter’s effort to remove metal detectors from schools in her district, and hopes similar policies can extend throughout the city’s entire public school network.

“I think maybe this is kind of the best outcome,” Haridopolos said. “In this moment of crisis, it becomes clear that the whole system is rotten. And so having a close ally like her — even in this interim time — my hope is that we can do some really progressive things in the next couple of months.”