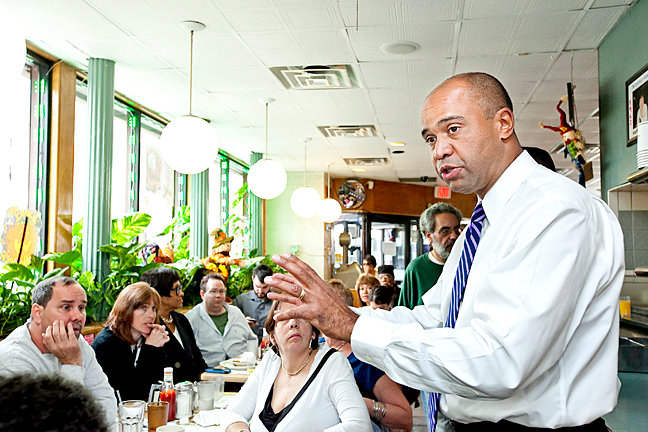 A consultant with one of the most active developers in this part of the Bronx is about to take on a new position. Former Bronx borough president Adolfo Carrión Jr., is set to become the next commissioner of the city's housing preservation and development department.

He was among three appointments Mayor Eric Adams made Sunday to his "affordable housing leadership team," joining new chief housing officer Jessica Katz as well as Eric Enderlin, who will continue to lead the city's Housing Development Corp.

"I said from day one of my campaign that we are going to end the housing affordability crisis, and this is the team of extraordinary leaders who will do just that," Adams said, in a release. "This team has a clear mission: To create, preserve and maintain safe, affordable housing that will build a more equitable city."

Carrión was Bronx borough president between 2002 and 2009, before joining the Obama administration as the first White House Office of Urban Affairs director. He stayed in that position for less than a year before moving on to become a regional manager for the U.S. Department of Housing and Urban Development.

In more recent years, he's run a real estate development and consulting firm called Metro Futures. But Carrión also has worked with Stagg Group, which has been one of the most active builders of muti-unit apartments in the Bronx in recent years, especially in the northwest portion of the borough. Stagg is actively building two complexes on Broadway in North Riverdale, and is reportedly gearing up to build on the former — and controversial — Montefiore medical center site on Riverdale Avenue as well.

Stagg also constructed 5731 Broadway as a standard apartment building in 2017, but then leased out the entire building to the city for it to open a homeless family transitional facility.

Carrión's social media lists his role with Stagg as a senior development consultant, but Adams' describes his role as an executive vice president.

In his announcement, Adams included statements from a number of area leaders and politicos backing his decision to have Carrión lead housing preservation and development.

"New York City's affordability crisis is very real," said U.S. Rep. Nydia Velázquez, in a release. "As a senior member of the House Sub-Committee on Housing and Insurance, I look forward to rolling up my sleeves and working with Commissioner Carrión and this administration to tackle, head-on, our shortage of affordable housing."

"For decades, Adolfo Carrión Jr., has been a trailblazer and an effective advocate for our communities," state attorney general Letitia James said. "Adolfo has a keen understanding of the issues affecting our neighborhoods, particularly the urgent need for safe, affordable housing for New Yorkers."

"The appointment of Adolfo Carrión has HPD commissioner could not be more appropriate and timely," said Frankie Miranda, president and chief executive of the Hispanic Federation. "His leadership at the local and national levels on issues of affordable housing and community development is hard to match."

But it's not clear how others more locally may take the appointment. Charles Moerdler, longtime chair of Community Board 8's land use committee, has grappled with Stagg and its representatives over a number of projects over the years, ranging in everything from off-hour construction noise, to traffic impacts, to fears more of its projects would be turned over to the city's homeless services department.

Moerdler and Carrión even went head-to-head a bit during the 2015 construction of 3469 Cannon Place, which would later become known as 3470 Fort Independence St. After the leader of Bronx Community Board 12 shared Stagg's history of turning some of its developments into homeless facilities, Carrión assured Moerdler that would not be the case in this part of the borough.

"It is no secret that there have been some challenges with the relationships with community boards," Carrión told Moerdler at the time while also making clear that the Cannon Place property, nor three others — 6151 Broadway, 5959 Broadway and 5731 Broadway — would not be turned over to the homeless services department. Less than two years later, Stagg did just that with 5731 Broadway.

"For over a decade, I have been honored to participate in HDC's challenging mission — to increase affordable housing that is truly affordable for working families and individuals," Moerdler told The Riverdale Press in a statement. "I look forward to his joining that effort as HPD commissioner."

As chief housing officer, Katz will oversee the city's housing agencies and affordable housing strategy, according to Adams' office. She was most recently the executive director of the Citizens Housing & Planning Council, which pushed for basement apartment conversions, and more tenant involvement in the decision-making process at the New York City Housing Authority.

Enderlin has led the Housing Development Corp., since 2016 after serving as a deputy commissioner with HPD.

Carrión, who succeeds Louise Carroll has HPD commissioner, started out as a district manager for Bronx Community Board 5 before winning a city council seat in 1998. He would move up to the borough president's role just four years later, taking office in 2002, before making way for Ruben Diaz Jr.