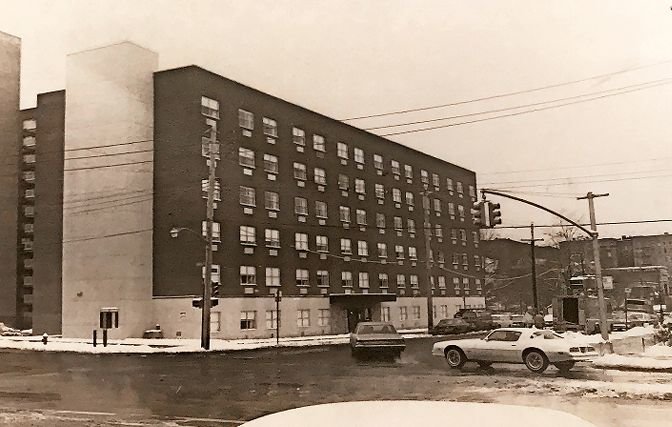 Brand new and empty is the way this Tibbett Avenue building would remain for more than a decade before it would eventually become the Manhattanville Nursing Home.
By SUSAN G. SAWYER

EDITOR'S NOTE: This story was originally published on May 11, 1978, and was reprinted as part of the 70th anniversary of The Riverdale Press.

Guards have been protecting a brand-new empty building, never occupied, at 311 W. 231st St., for two years, but no one knows what they are actually protecting it for.

Eugene Hollander originally built the six-story structure as a nursing home to be called Hollander Care Center. What it will end up forms the nub of a controversial debate.

As the building was nearing completion, Hollander became involved in the statewide nursing home scandal, and in March 1976, the state delayed opening of the nursing home.

One issue was whether a cousin of Mr. Hollander was qualified to administer the new facility.

Meanwhile, more and more Riverdalians knowledgeable about health care for the elderly were coming to the conclusion that this community is “overbedded.”

While Hollander battled with the state and with the federal Department of Housing and Urban Development, which holds his mortgage, the community formed a new organization. Heading the North West Bronx Community Health Care Consortium are Dr. Walter Henley, Dr. Joel Friedman and Mrs. Eleanor Rossbach.

Working closely with various community groups, including the Riverdale Mental Health Association, the consortium came up with an alternate use for the Tibbett Avenue building — a multi-service health care facility.

The top four stories would provide housing for the elderly. The first two floors would contain the mental health clinic, an ambulatory health care facility, and a senior citizen program with a nutrition component.

This plan sounds good to everyone but HUD. It sounds good to Joyce Pilsner, administrative director of the Riverdale Mental Health Association; members of the City Planning Commission and Community Board 8; and public officials including Assemblyman Oliver Koppell, Bronx borough president Robert Abrams, and U.S. Rep. Jonathan Bingham.

For the past few months, these individuals have been meeting with representatives of HUD in an effort to make their idea a reality.

What they face now, however, is a “Catch-22” situation. According to a HUD spokesman, HUD holds the mortgage on the building, and HUD is the agency that is guarding it.

HUD has an investment to protect, and it can get the most money back if the building is sold for a nursing home, since fewer structural changes would be needed.

“We have an insurance fund to pay off. To turn around to the community’s plan would take a lot of money. They’d have to apply for a direct loan for senior citizen housing under our 202 program, and this could take two years,” said a HUD official.

But as Joyce Pilsner tells it, “You can’t apply till you have the site, and HUD won’t hold the site.”

Further, Hollander still technically owns the building, and the government must protect his rights. It is possible he could find a buyer who would use the building as a nursing home.

Until the bank forecloses and HUD becomes the owner, HUD’s hands are tied. There are rumors that foreclosure has begun. The process can take nine months.

Even if things could work out, HUD isn’t convinced that Riverdale is “overbedded” because HUD takes into consideration citywide need, not just local need.

“We’re left with the problem of proving we don’t need a nursing home. That’s our homework,” says Martin Wolpoff, a member of the Riverdale Community Council and CB8’s health committee.

Meanwhile, Assemblyman Koppell notes that Hollander is still contesting the right of the state to cancel his license, and his ongoing litigation confuses the picture further.