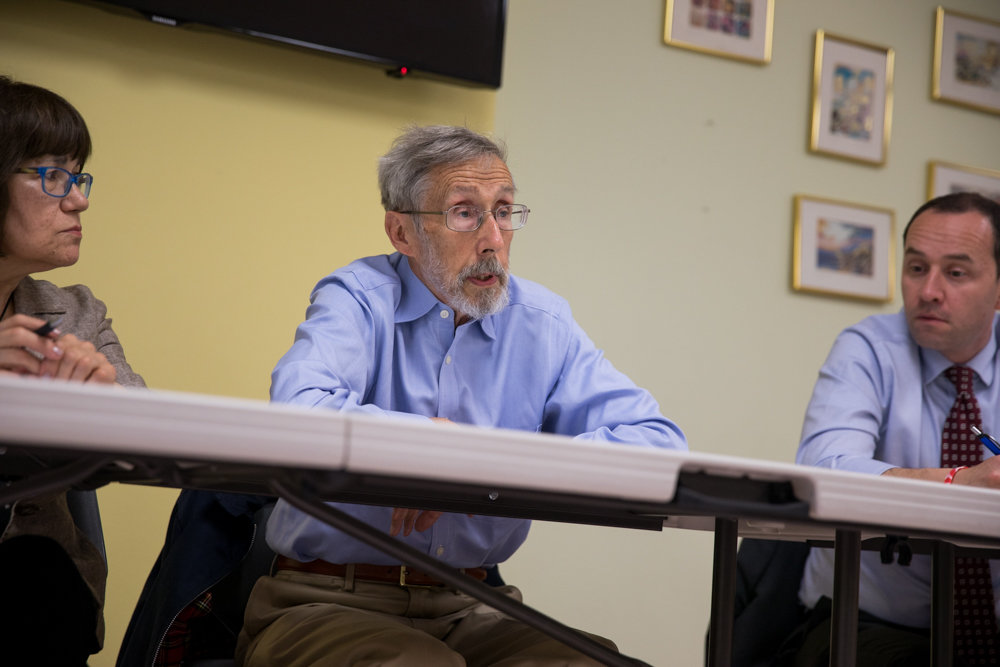 Bob Bender provides updates on the status of the Hudson River greenway at a meeting of Community Board 8’s special greenway committee. The next step in the process of developing the greenway is an engineering study.
JULIUS CONSTANTINE MOTAL 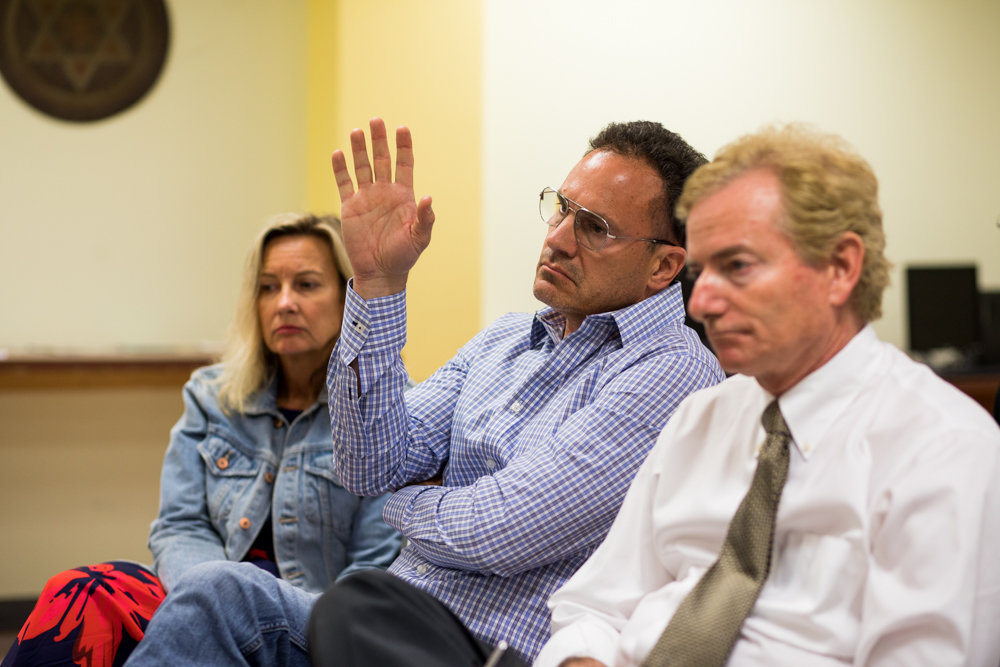 Cliff Stanton, chair of the Friends of the Hudson River Greenway, raises his hand to ask Bob Bender a question during a meeting of Community Board 8’s special greenway committee June 12.
JULIUS CONSTANTINE MOTAL 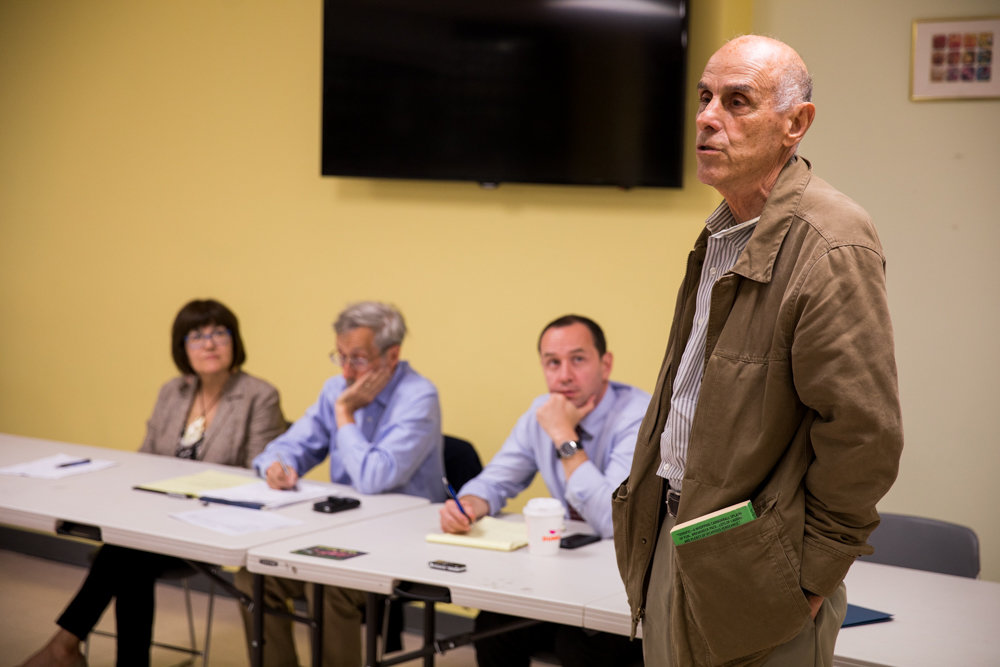 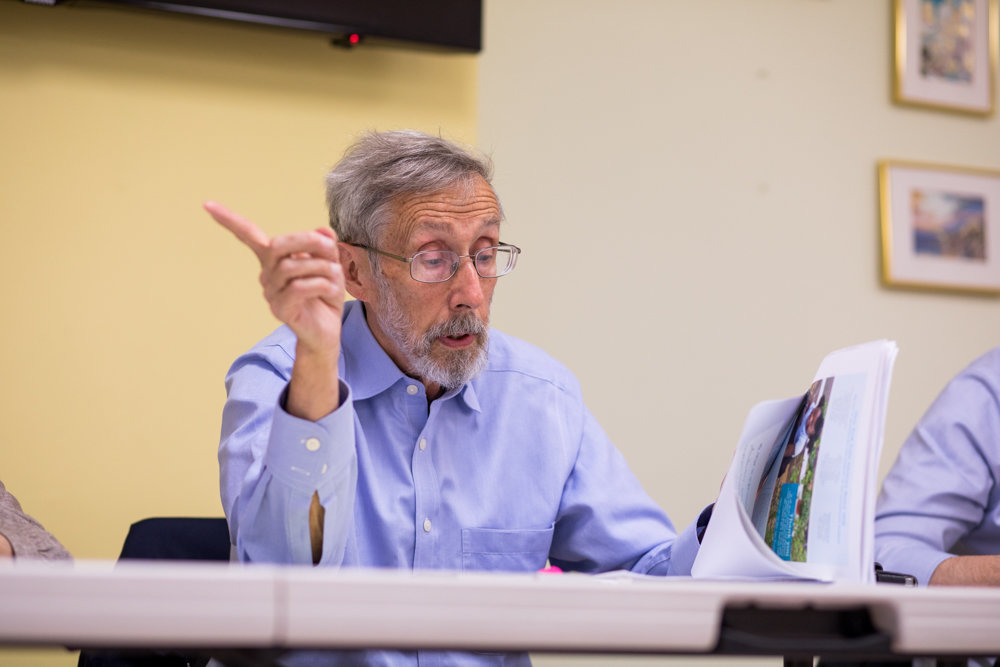 Bob Bender reads from the minutes of an MTA board meeting during Community Board 8’s special greenway committee’s first meeting of 2019. Bender believes the MTA is required to take measures to combat the effects of climate change that would align with the goals of the greenway project.
JULIUS CONSTANTINE MOTAL
Previous Next
By JOSEPH KONIG

Not unlike a Metro-North Hudson line commuter train during rush hour, the long planned Hudson River Greenway project in the Bronx is moving slowly down the track toward its final destination.

Bob Bender, chair of Community Board 8’s special greenway committee, says the community organization is in discussions with the Trust for Public Land to conduct an engineering study for the project, intended to create long-demanded access to the Hudson River through trails and parks. The trust is a national non-profit focused on building and preserving parks, playgrounds and trails across the country.

Carter Strickland, a former city environmental protection department commissioner, is the trust’s New York and New Jersey director. He told Bender and Cliff Stanton, chair of the Friends of the Hudson River Greenway, his group is interested in the project. There were a few hoops to jump through, but Strickland told them he wanted to help.

Often, the trust will buy land, fix it up, and hand it over to municipalities on the condition they preserve it. But all Bender was looking for was for an entity to shoulder the cost of an engineering study — something CB8 is unable to pay for.

“The ink is not dry,” Strickland said. “But we’re very interested.”

The engineering study is expected to cost millions and could take several years. Bender and the greenway advocates plan to find funding sources for the trust, who would then hire a firm to develop a greenway park design.

The special committee last met in October to discuss the results of a feasibility study produced by Metro-North, whose tracks run along the Hudson River — right where Bender and other committee members hope to turn into walking and bike paths. Although Metro-North itself won’t participate in the construction or maintenance of the park, the railroad did say a greenway along that part of the river was doable.

Metro-North officials warned, however, that building a three-mile trail from scratch along the Hudson River between Yonkers and Spuyten Duyvil won’t be easy. The overall plan is more than just cost and design. Whoever leads the project would have to negotiate with various property owners along the route, address security concerns, and find a way to prevent flooding.

Yet, it’s those challenges that attracted Strickland to the greenway project.

First, Bender must find the engineering study funding needed to take the next step.

Bender outlined several possible sources he and others were hoping to explore at the committee’s June 13 meeting at The Riverdale Y.

Councilman Andrew Cohen — who connect Bender and Stanton with Strickland — pledged to find $500,000 for the greenway in the 2020-21 city budget, Bender said. But that money won’t be available until next July at the earliest.

Another possible funding source would be the Hudson River Valley Greenway Authority, which Bender says can give up to $500,000 in matching grants to city greenway projects. Ultimately, the study will cost at least $1 million, Bender believes.

Ideally, Bender wants to get Metro-North back on board. In the wake of 2012’s Hurricane Sandy, the MTA re-evaluated its entire system of buses, trains and subways to prepare for rising sea levels and destructive weather events caused by climate change.

Part of the consideration included elevating portions of track and certain substations to prevent future flooding. Flood prevention measures and the construction of the greenway could provide an opportunity for collaboration, especially with existing tracks at mostly river level not far from the Hudson’s banks.

Cyclist Eric Milland, however, has a different plan to secure funding — one he said would guarantee the greenway would be built right away.

Bender laughed at the idea, even suggesting — jokingly, of course —  auctioning off the greenway’s naming rights to the highest bidder. Ultimately, the low seven-figure price tag for the engineering study is peanuts compared to the projected nine-figure cost for the greenway’s construction.

But for Bender, incremental progress means the greenway project is at least moving in the right direction.

“We had to cross the bridge that was in front of us,” Bender said. “And that’s what we have now done.”