CB8 vets won't have to fight for uncontested positions 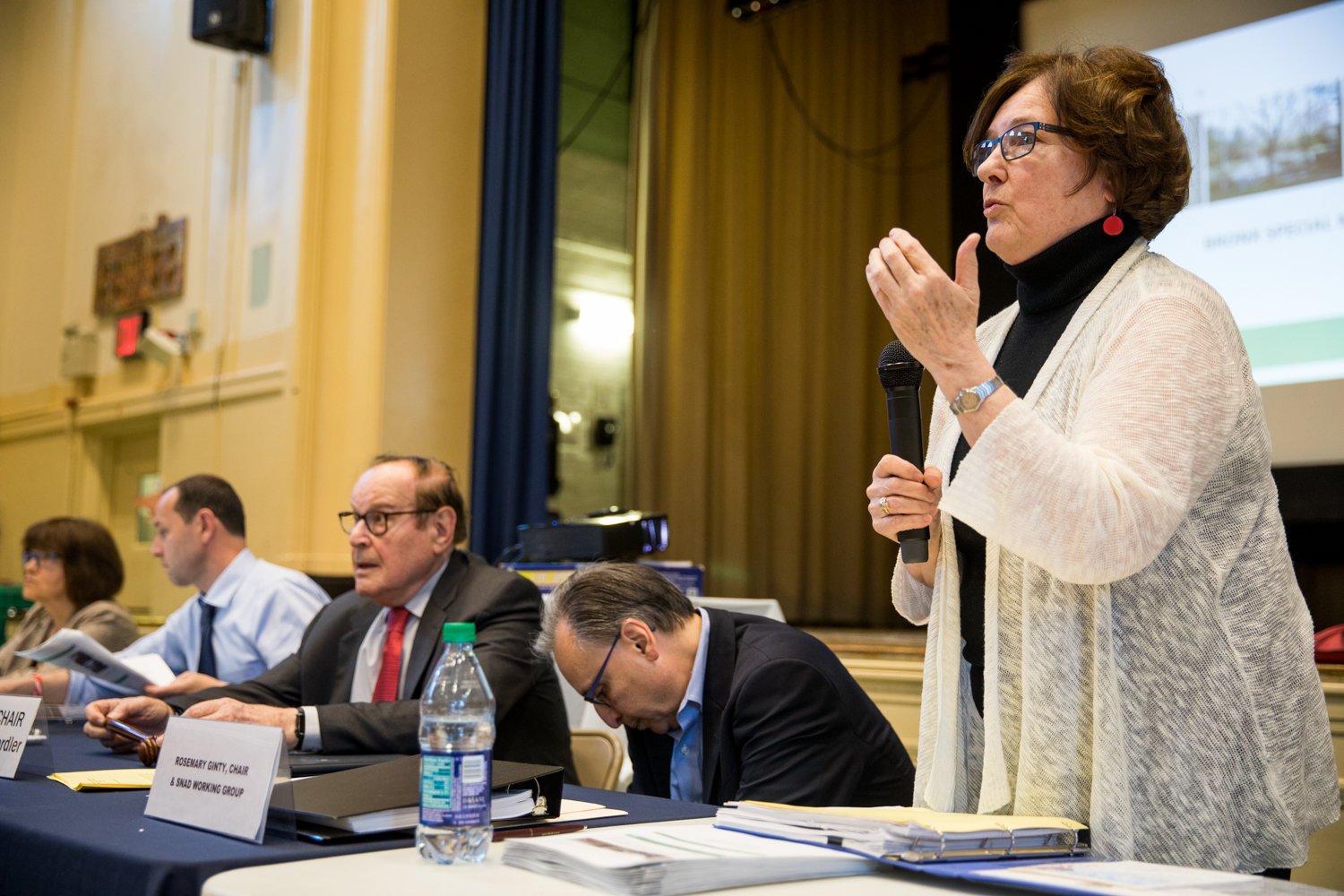 Community Board 8 chair Rosemary Ginty speaks at a land use committee meeting about the proposed changes to Special Natural Area District regulations at P.S. 81 last year. The race to fill Ginty’s seat is heating up ahead of the election this summer.
JULIUS CONSTANTINE MOTAL / File 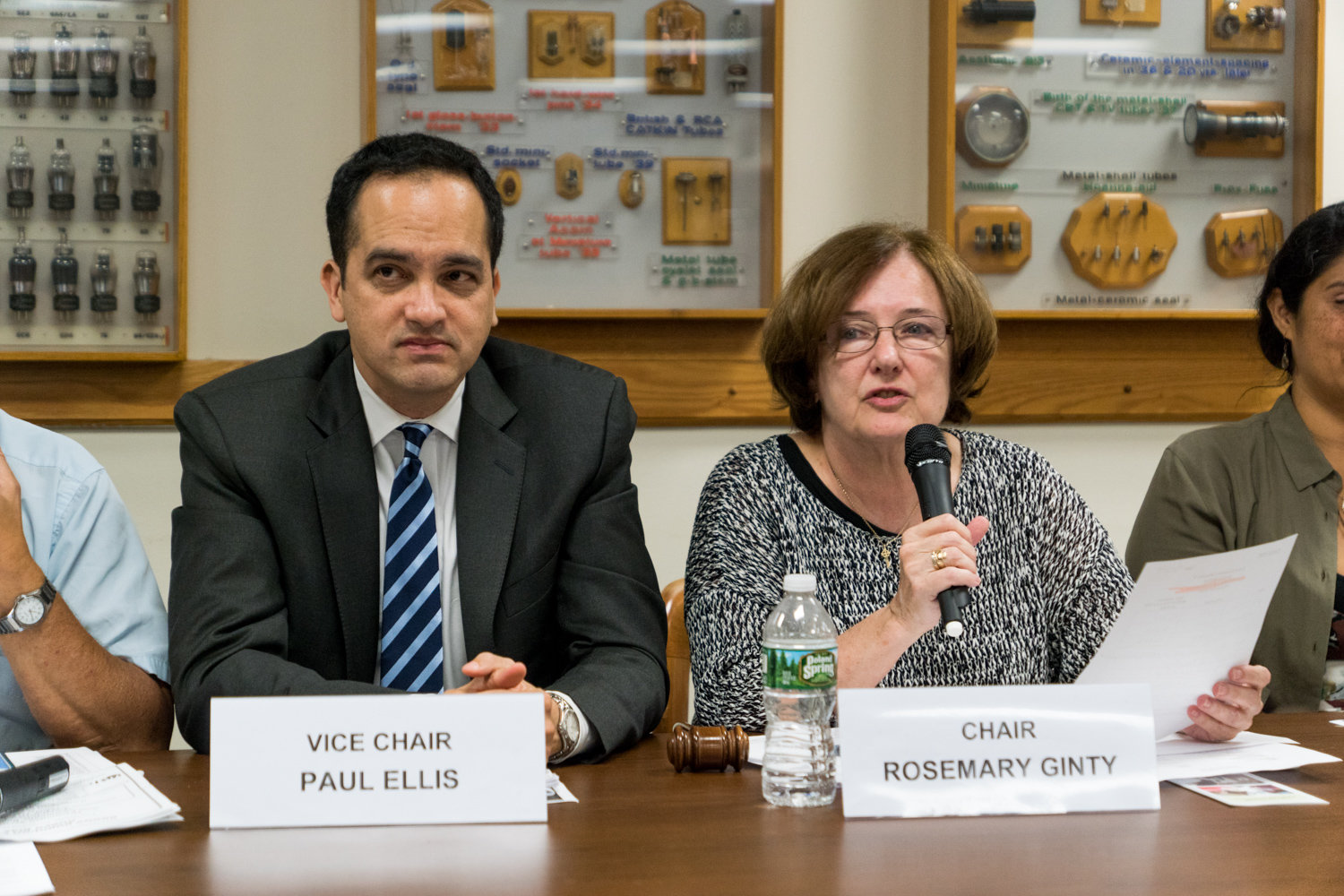 Community Board 8 chair Rosemary Ginty speaks at a 2017 meeting alongside Paul Ellis. Ginty’s time as chair is coming to an end this summer, and a nominating committee already is getting together to potentially recommend a replacement.
JULIUS CONSTANTINE MOTAL / File 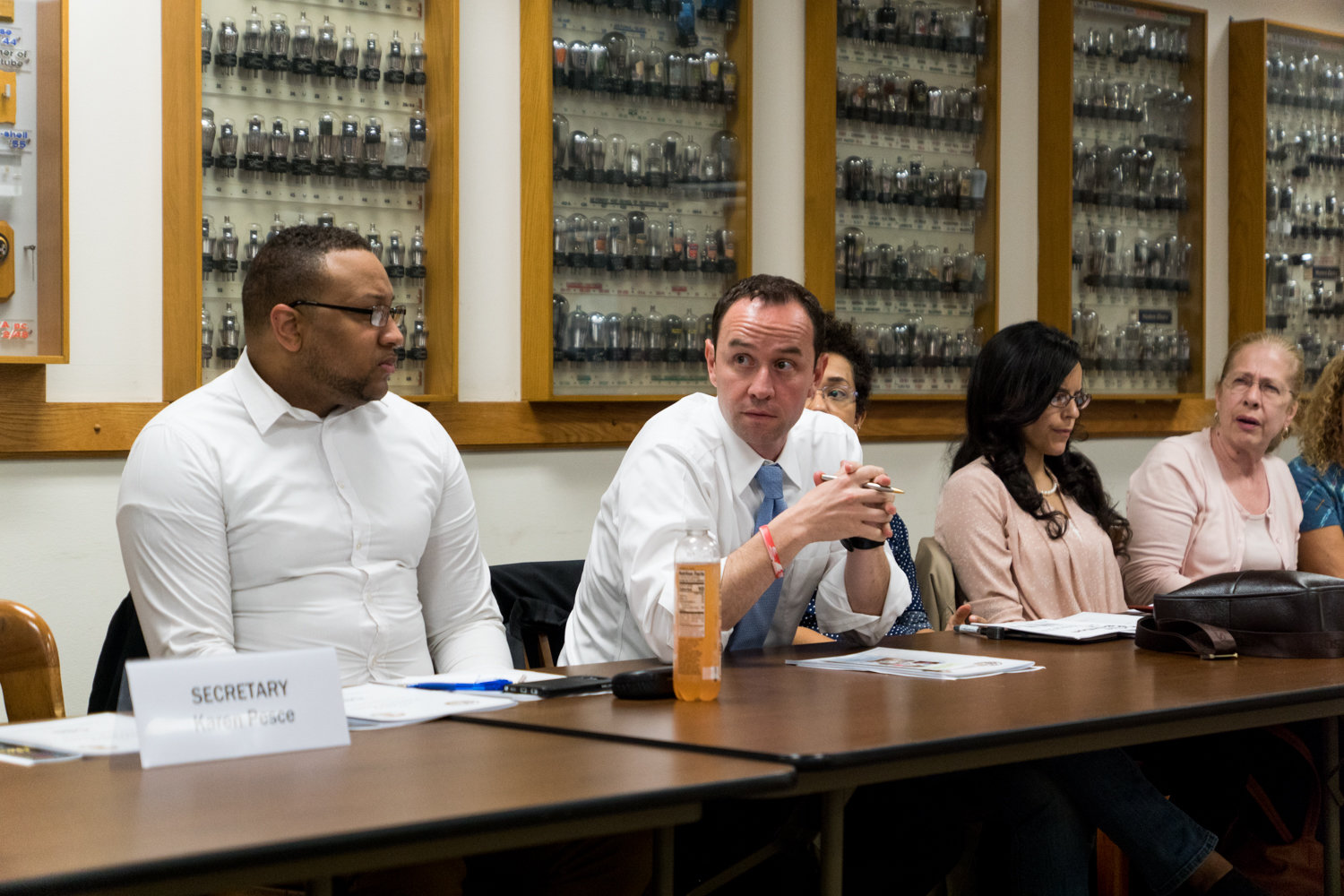 Community Board 8 traffic and transportation committee chair Dan Padernacht, center, already has served in the board’s top spot. He believes there is a level of respect and transparency that comes with those wanting to serve as committee chairs or officers to come in front of the nominating committee, but his colleagues don’t believe that should apply to incumbents.
JULIUS CONSTANTINE MOTAL / File 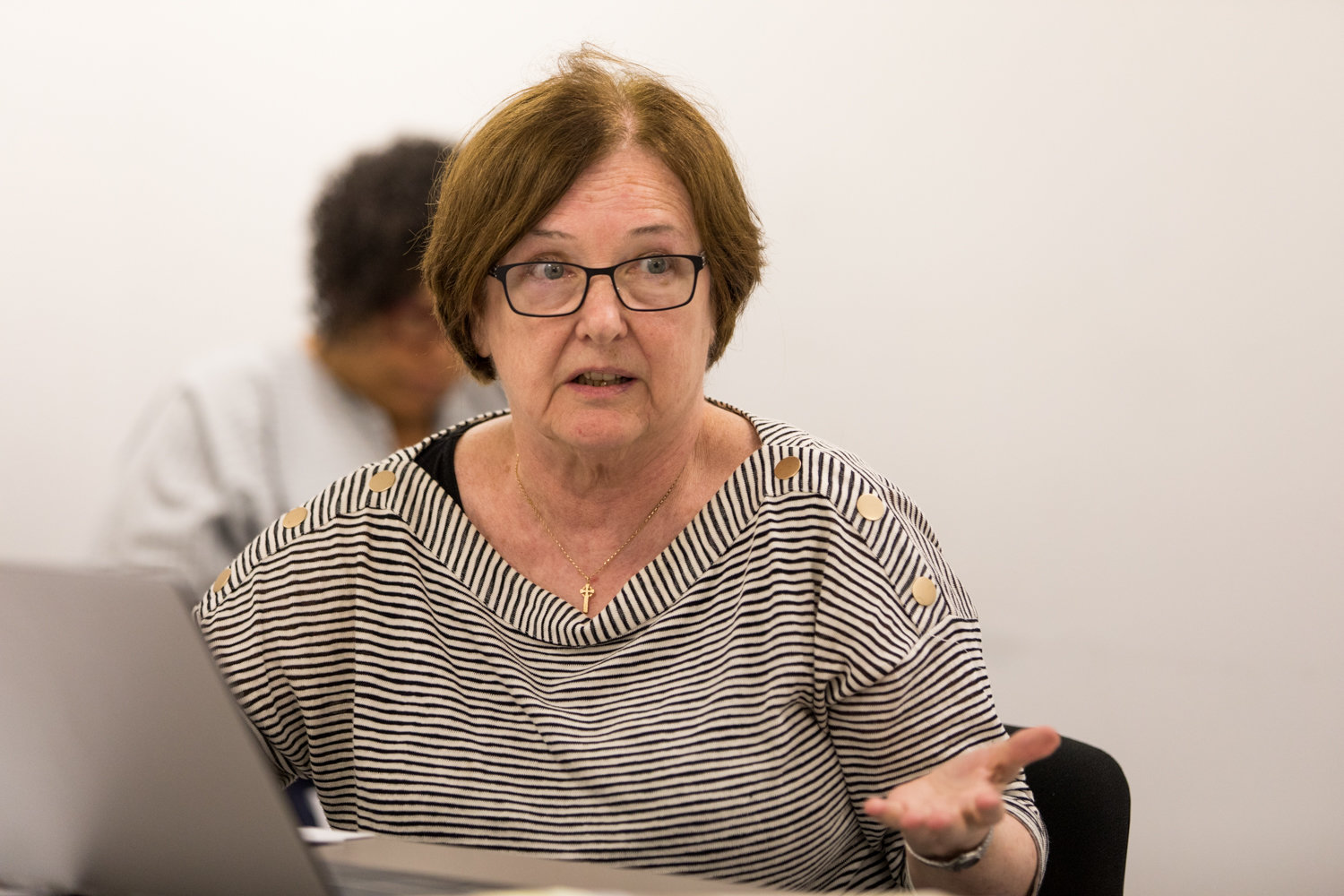 Community Board 8 chair Rosemary Ginty will vacate her seat this summer, and the race to fill it is heating up.
JULIUS CONSTANTINE MOTAL / File
Previous Next
Upcoming meetings

Community Board 8’s nominating committee will interview potential chair and officer candidates, as well as openly discuss who it will recommend to the full board at these meetings throughout May.

All meetings are open to the public, and are expected to be available through the online videoconferencing platform Zoom.

Meetings will only be held if necessary.

Community Board 8’s nominating committee is tasked with recommending more than a dozen people for various roles ranging from who will lead the aging committee all the way up to CB8’s top spot. For the most part, many of the board members already serving in leadership roles are willing to stay put. But still, should they be required to meet with the nominating committee, even if no one is challenging them for their slot?

“In my days as chair of health and hospitals, I always went in” for an interview in front of the nominating committee, Froot said. “I didn’t think it was a choice. I was risk adverse, and I figured if I wanted to do it again, I would talk to the people who were doing the nominating.”

But requiring someone to sit for an interview simply to get re-nominated to their old chair just isn’t feasible now, Froot added. Especially since the community board has opened such interviews and discussions to the public.

“It has been a matter of the decision of the person seeking the office, there they are the incumbent,” Froot said. “It wasn’t held against people necessarily. They were not dropped off the nominating slate if they didn’t ask for an interview.”

“Every year I could interview, I did interview,” said Padernacht, himself the chair of CB8’s traffic and transportation committee. “Even if there was no one else running for the position. It was just to kind of bounce off ideas of what they were looking for in a prospective chair. I thought it was a sign of respect to the board and the nominating committee.”

That nominating committee is obligated to present a slate of potential candidates to the full board membership by summer. That includes who it recommends for every committee chairmanship, and who should fill officer roles.

Most committee chairs have indicated they’re good for at least another year — except for parks and recreations committee chair Bob Bender, and public safety chair Margaret Donato. Although Donato didn’t relay a reason for stepping down from that committee leadership, Bender has indicated interest in a much different position — that of vice chair, a seat currently held by Laura Spalter.

Because of term limits, CB8 chair Rosemary Ginty must step down from her leadership position, and Spalter has publicly announced her interest to step in. But then again, so has another board member, economic development committee chair Sergio Villaverde.

With two people vying for chair, no one was eyeing the vice chair position — except Bender, that is.

With the current slate, the nominating committee likely would only have to interview five people — Spalter and Villaverde for chair, Bender for vice chair, and new chair nominees for both parks and recreation and public safety.

Interviewing everyone — even for 15 minutes — would just take too much time, Froot said.

“I agree with Dan that people should certainly have the opportunity to interview if they wish,” Ellis, a former vice chair of CB8, said. “I don’t know if I would go as far as to say we would require people to interview. It is less about the logistical challenge about having too many interviews, and it’s more about what’s the value-add for the process.”

Especially for chairs who have been in their positions for a long time, Ellis said.

“We know so much about them already that there’s not much that we would be able to learn from them in a 15-minute interview,” he added.

But the committee also is not limited to recommending only people who volunteer for positions, Padernacht said. They can seek out anyone they believe is qualified for the position, and agree to recommend them, whether they stand up for the position or not.

And, he added, it also comes back to openness and transparency.

“I don’t think any member or chair or officer should rest on their laurels,” Padernacht said. “I think they should have a conversation with the nominating committee. And I would view somebody not coming forward to speak to the committee probably in a negative manner.”