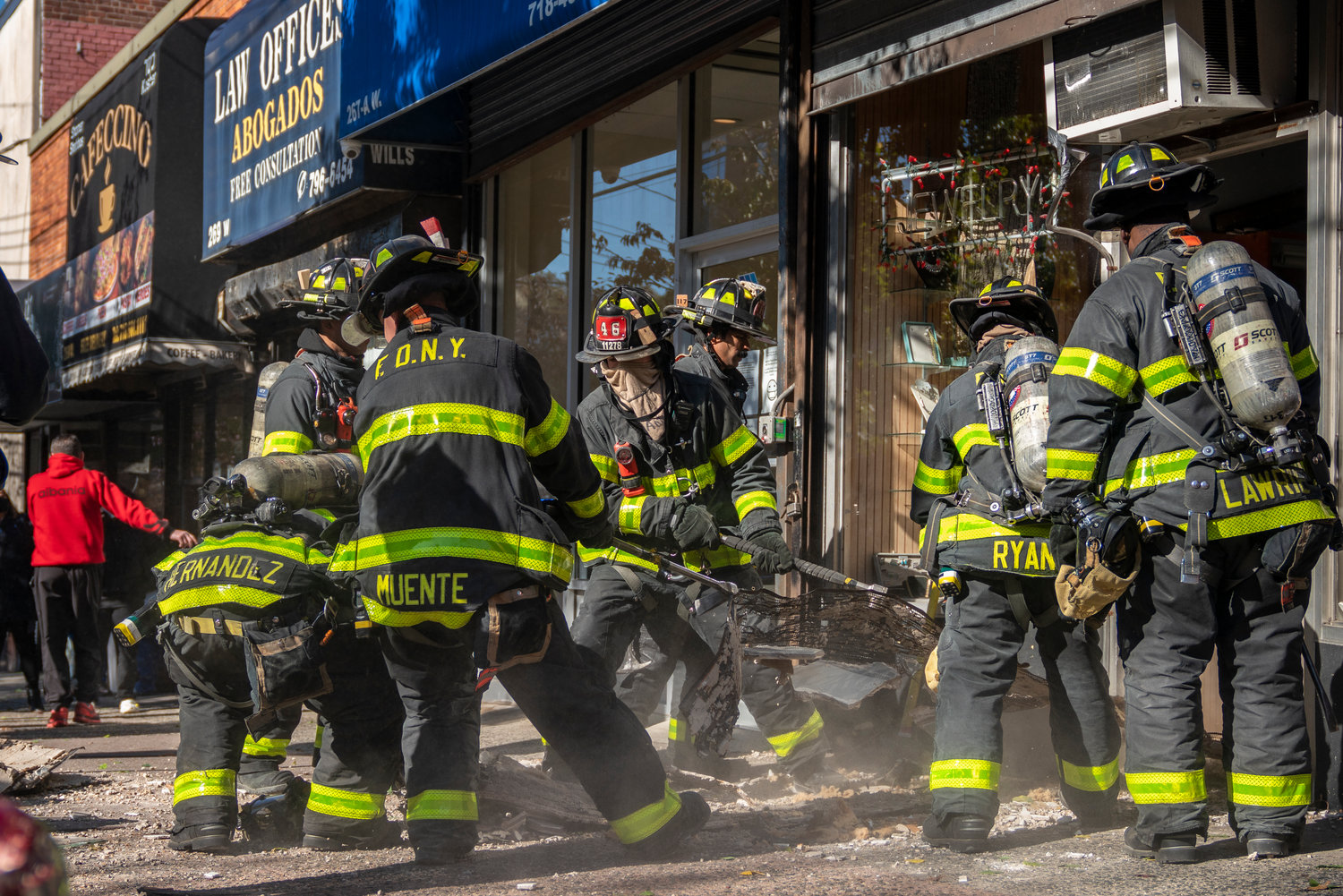 Firefighters pull rubble out of the Picture Perfect Frame store at 267 W. 231st St., on Monday afternoon. The entire interior ceiling collapsed on the shop and its owners, Nohad and Samia Jourdy. Luckily both escaped serious injury.
HIRAM ALEJANDRO DURAN 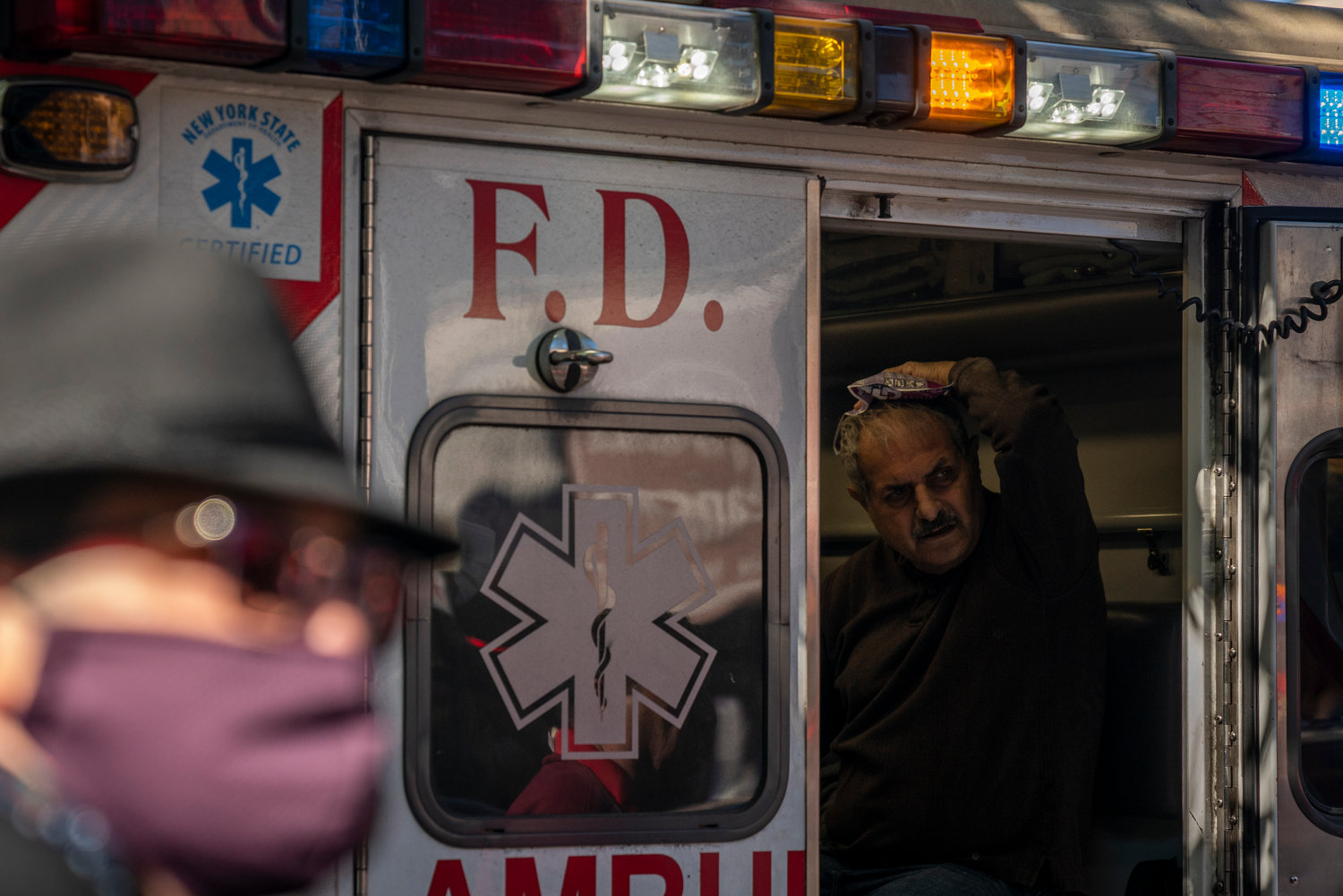 Paramedics treat Nohad Jourdy minutes after pulling him out of the rubble created by a ceiling that collapsed on both him and his wife, Samia, at Picture Perfect Frames on West 231st Street.
HIRAM ALEJANDRO DURAN 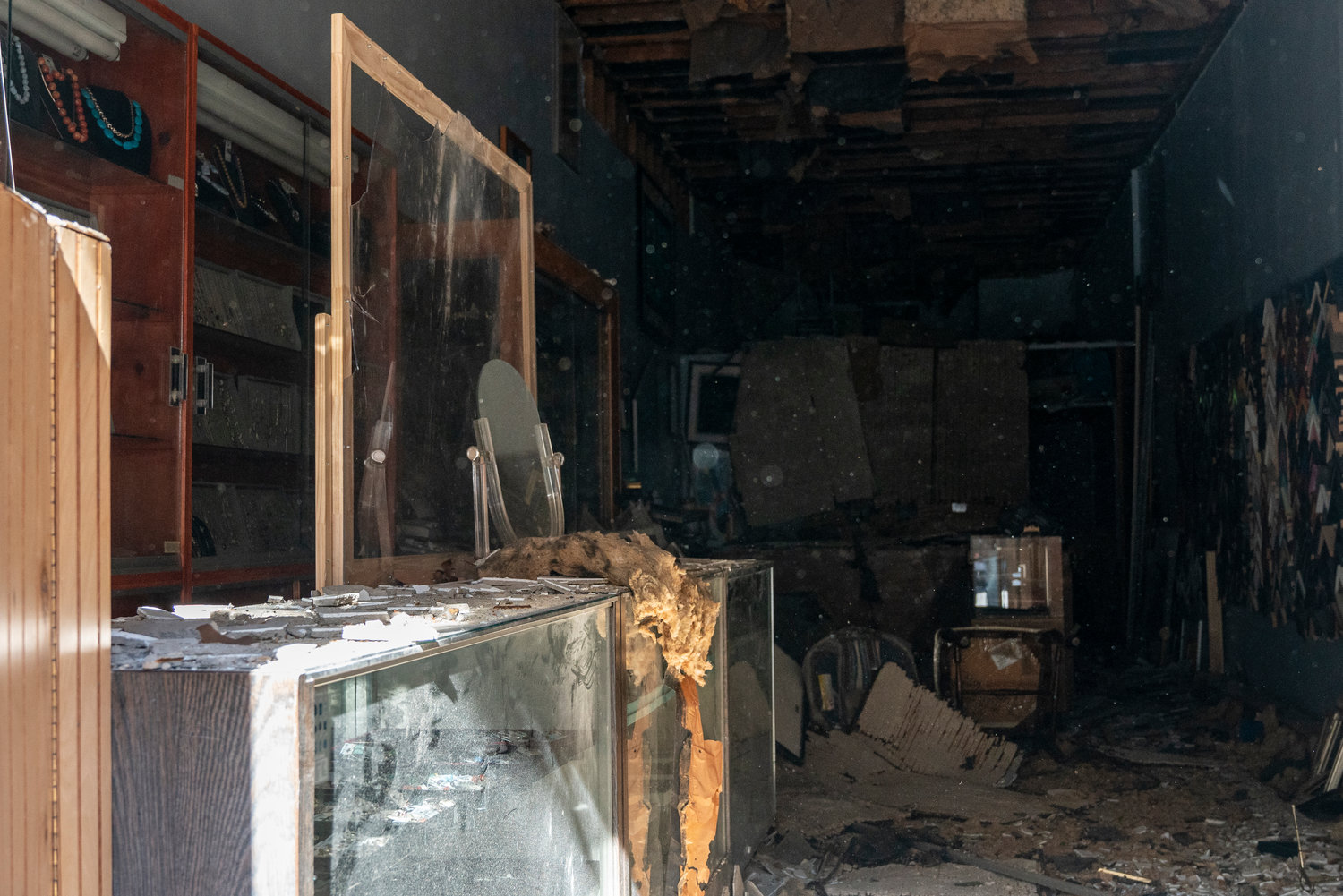 Dust and debris litter what was once a pristine Picture Perfect Frame store after a large portion of its wire lath and plaster ceiling dropped on its owners, Nohad and Samia Jourdy.
HIRAM ALEJANDRO DURAN 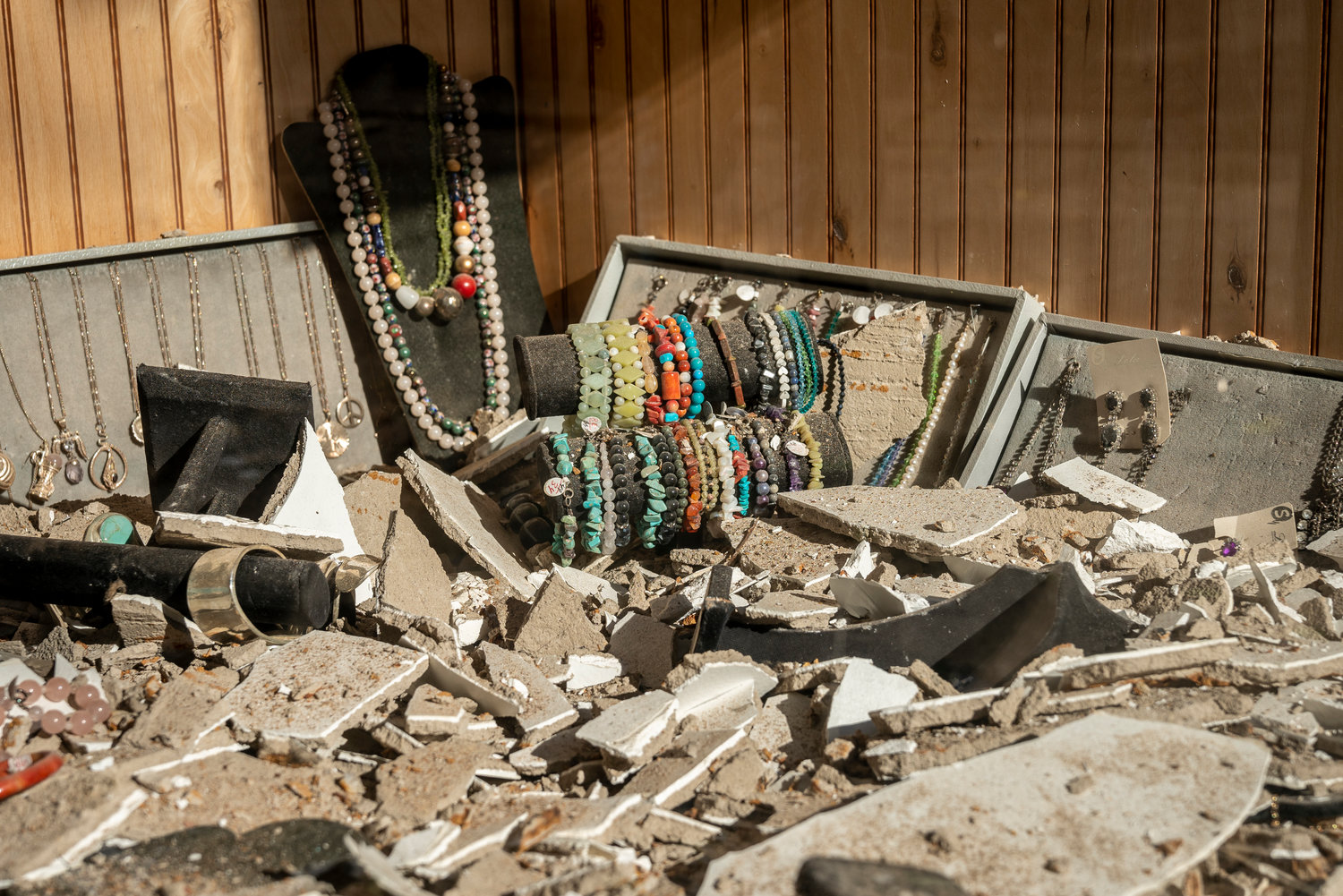 Jewelry was Samia Jourdy's expertise in the Picture Perfect Frames store she owned with her husband Nohad. Both were able to escape serious injury after the wire lath and plaster ceiling fell on top of them Monday.
HIRAM ALEJANDRO DURAN 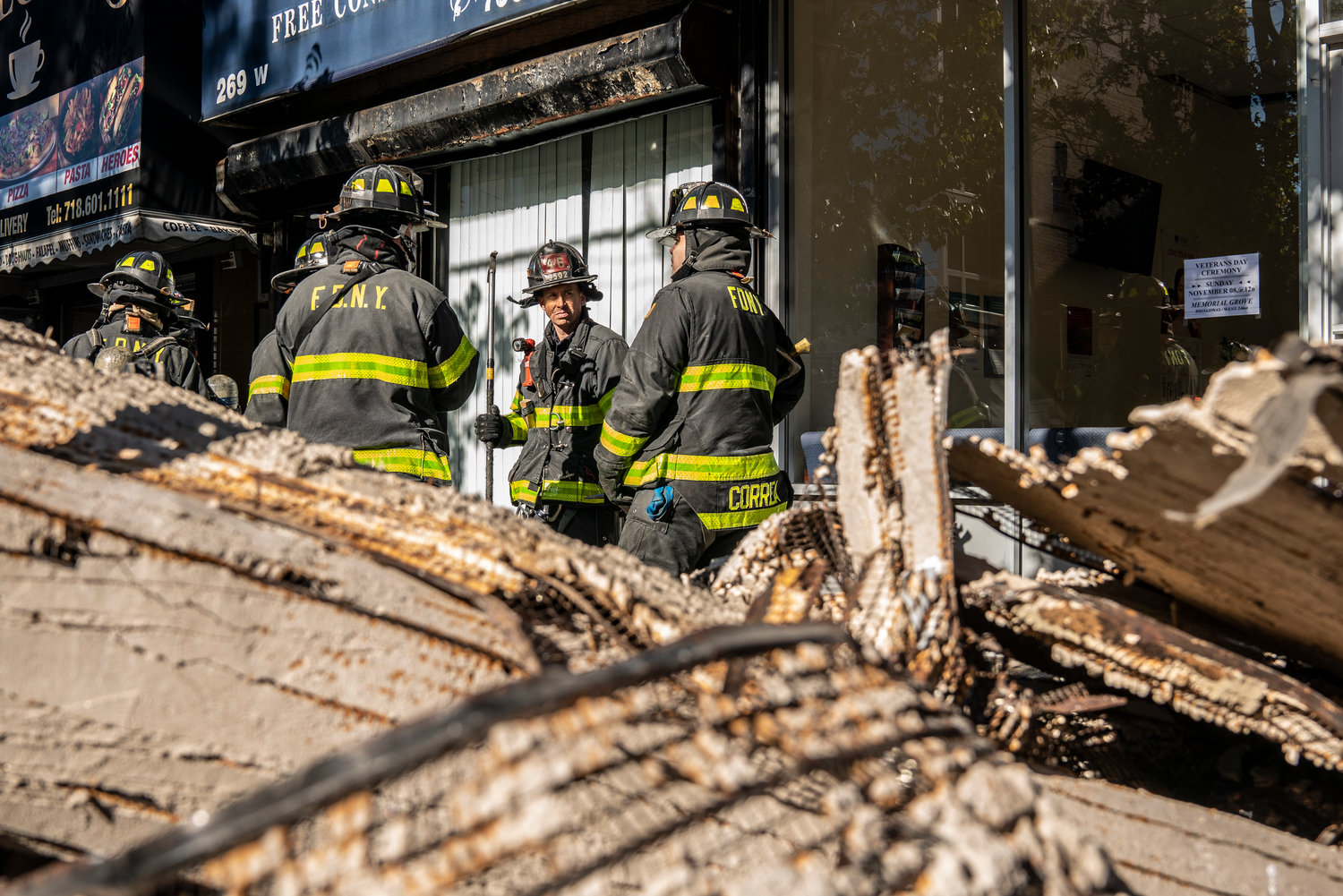 If there was ever a chance for State Farm Insurance to live up to its slogan of being "like a good neighbor," it was early Monday afternoon in the Bronx. Alex Gandia, who works at Jim Hockemeyer's State Farm branch on West 231st Street, came to the rescue of his neighbors after their ceiling crashed on top of them.

"We heard a rumbling sound, like a freight train, coming from the back of the store to the front of the store," Gandia said. "And then it stopped. I'd never heard anything like it, so we walk outside, but we don't see anything."

But then Gandia glanced at the storefront to Picture Perfect Frames, which has operated next door at 267 W. 231st St., for the last two decades.

"The windows and doors were covered up in smoke and dust," Gandia said. "I could see the light fixtures hanging down, and I heard someone yelling. That's when we called 911."

Trapped inside Picture Perfect Frames were its longtime owners, Nohad and Samia Jourdy. What appeared to be hundreds of pounds of ceiling material had fallen on top of them — and it had all come with absolutely no warning. Especially for Samia, who was working in the back of the store, and the first to be buried by the rubble.

"I had no idea what happened," Samia said. "The whole thing was on top of me. All of a sudden I was on the floor and it was dark. All I could do was scream."

It's not exactly clear what happened to Picture Perfect's ceiling, except that crushed just about anything in sight. Firefighters arrived on the scene almost immediately, Gandia said, and minutes later, they were pulling both Nohad and Samia out of the rubble. No other customers were in the store at the time.

Both appeared to be more shaken up than anything. But all Samia could do was stare at the store she built with her husband in disbelief.

"There was no snow. It wasn't raining. I don't know what caused this," she said, shaking her head. "There's so much damage. I don't know how we come back from this."

Firefighters on the scene didn't have many details to share, and a request to the New York Fire Department for more information has yet to be returned.

Picture Perfect shares the building with both State Farm and West Derm Center. While fire officials checked the ceilings of both those storefronts, evacuations there were only temporary.

The building is owned by The Stephanie H. Moore Trust, according to city property records, which acquired the property last year from the estate of Helen Haase.

An inspection by the city's buildings department following the collapse determined that a 15-by-70-foot section of the wire lath and plaster ceiling fell on top of the store and the Jourdys. DOB issued a preliminary summons against the building owned for failure to maintain the building in a code-compliant manner.

Picture Perfect was ordered to be vacated, but the two neighboring stores had drop ceilings, buildings officials said, and appeared to be intact. The building first welcomed tenants in 1951, according to city records, but it wasn't clear if Picture Perfect's ceiling was original to the building, or rebuilt later.

About a half-hour after being pulled from the rubble, one firefighter was able to dig out Samia's jacket — something she really needed out in the chilly air. Once she had a chance to warm up a little, her thoughts became a little positive.

Before the pandemic, Gandia would say hello to the couple almost every morning. While he worries about whether Picture Perfect can continue, he's just happy the Jourdys were not hurt more seriously.

"They're wonderful people. A couple of good neighbors," he said. "You're so relieved to see that they look to be OK. They're absolutely shaken up a bit, but I am shaken up a bit, and I was next door."