Center struggles, but community board steps up 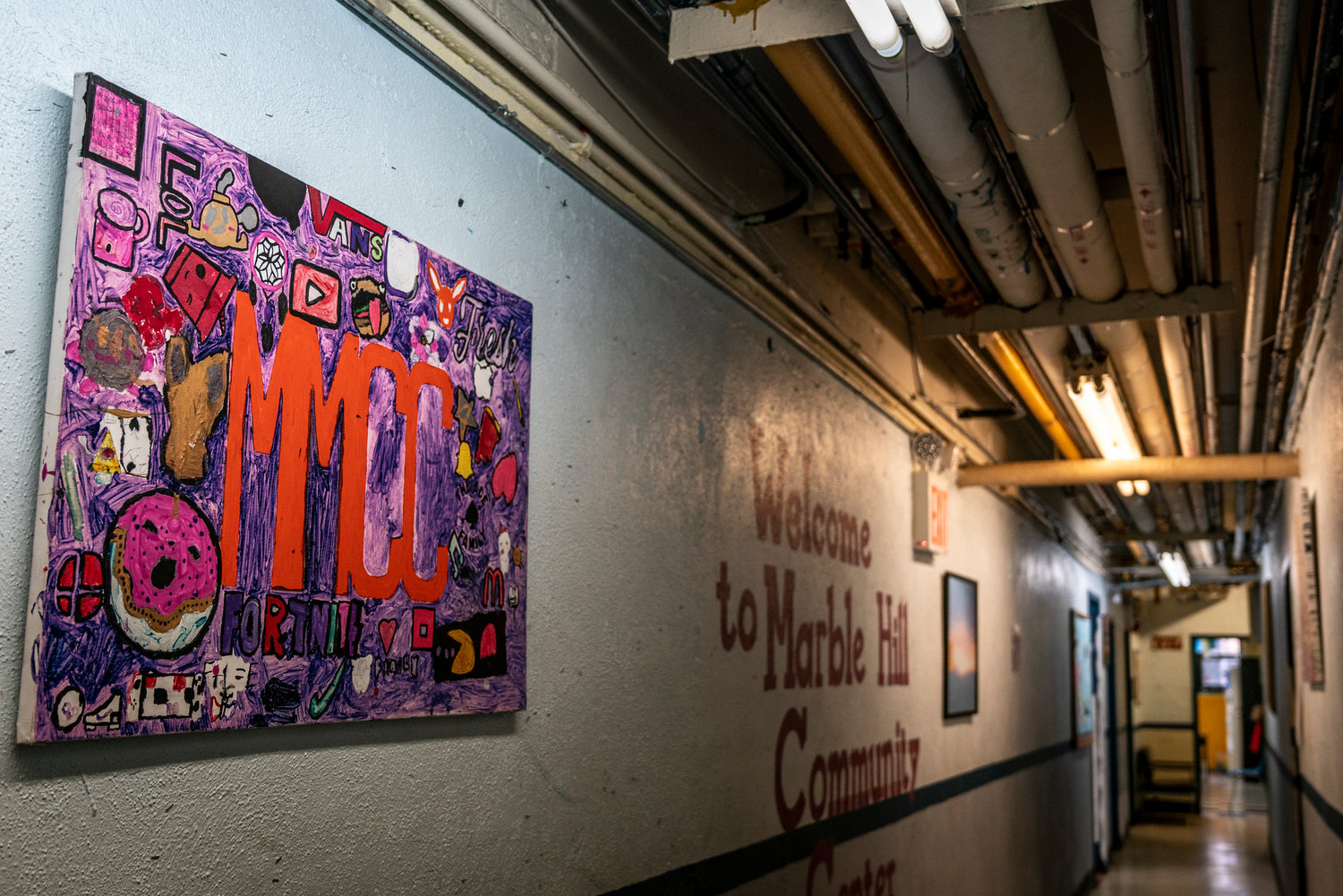 The Marble Hill Community Center is an important neighborhood hub for Marble Hill Houses residents and neighbors, but it does have some serious issues — leaks, broken heaters and more. Daris Jackson, chair of Community Board 8’s housing committee, wants to help.
HIRAM ALEJANDRO DURÁN 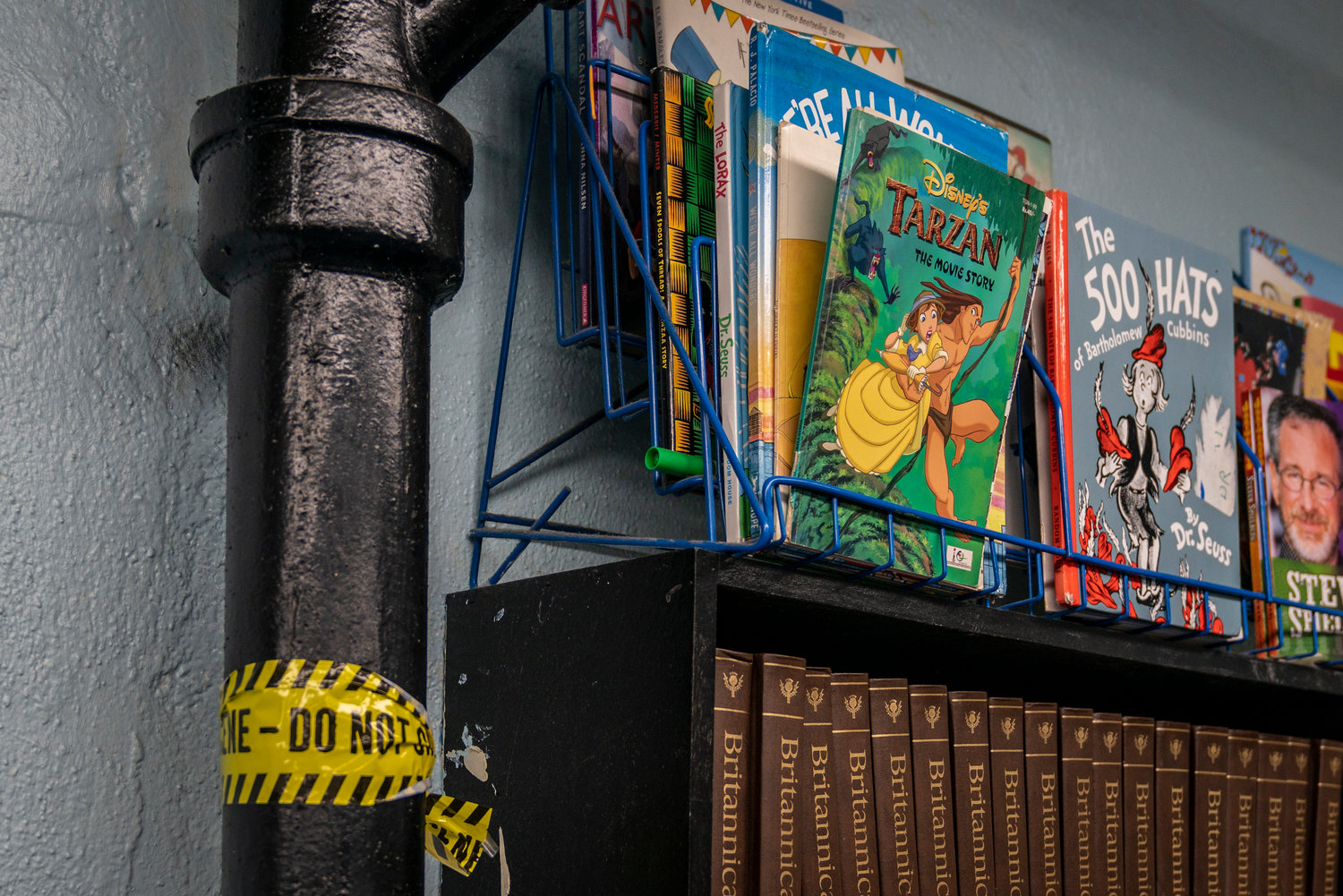 Community boards have a complex budgeting process, and there’s room for committees to submit their own projects and priorities. This year, Community Board 8’s housing committee wants to secure some funding for the Marble Hill Community Center, which committee chair Daris Jackson says is in desperate need of an upgrade.
HIRAM ALEJANDRO DURÁN 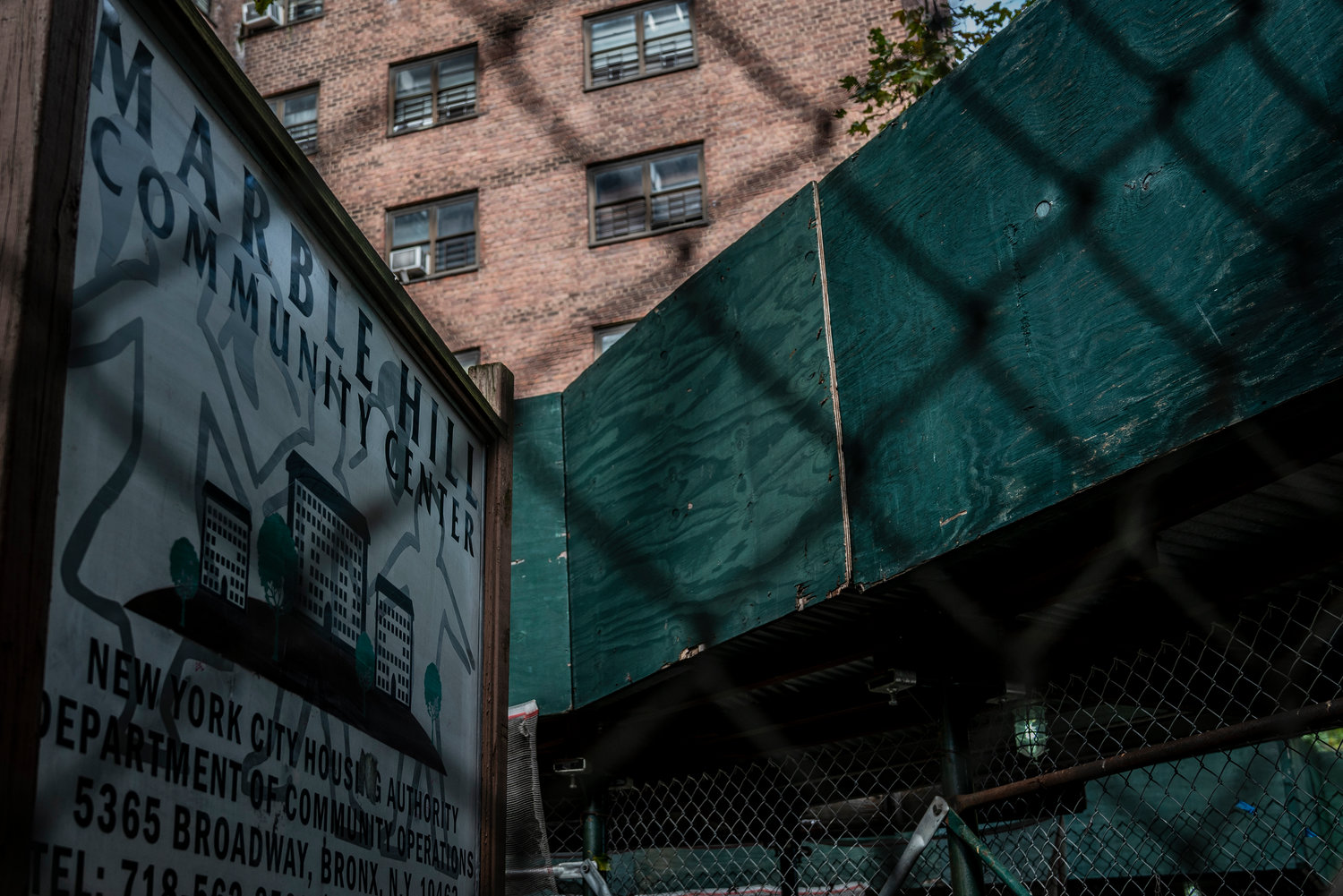 What can be done for a community center in disrepair? Daris Jackson, chair of Community Board 8’s housing committee, is trying to get some money to fix up the Marble Hill Community Center, which has struggled to repair a leaking roof and broken heater for years.
HIRAM ALEJANDRO DURÁN 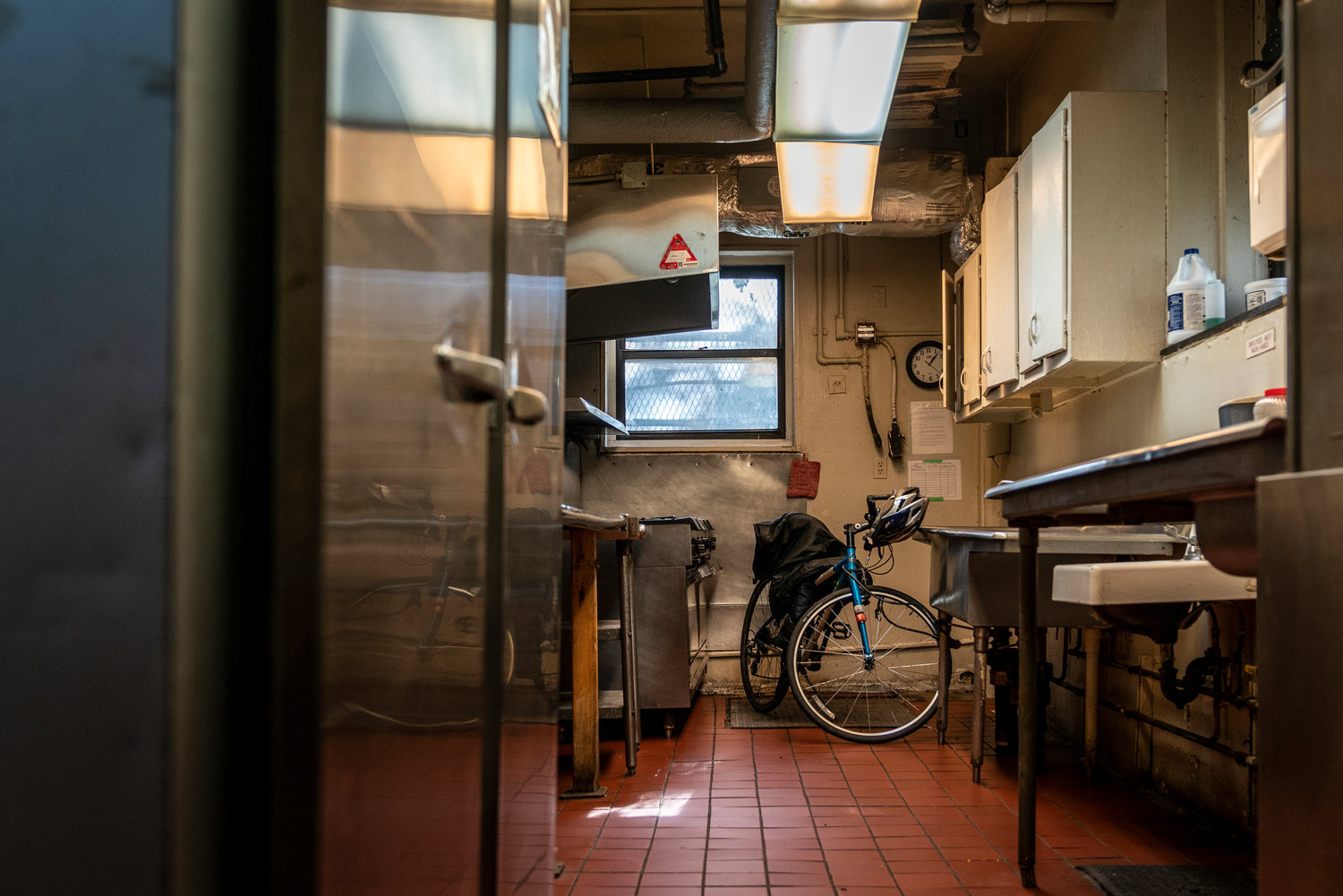 It might not be a successful bid, but Daris Jackson is determined to try his hand at improving conditions at the Marble Hill Community Center through the community board.
HIRAM ALEJANDRO DURÁN 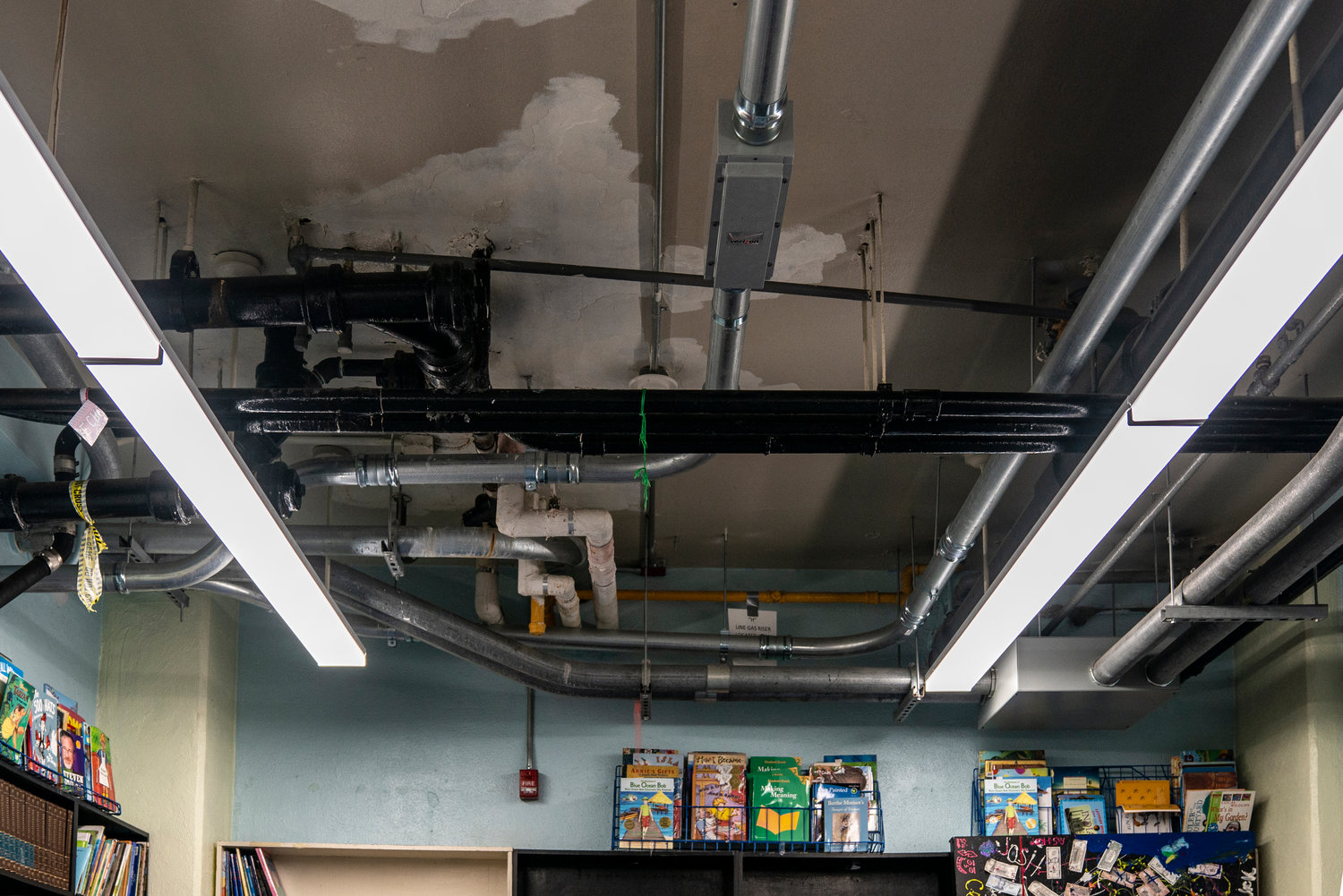 Who’s in charge of funding a community center? It’s not quite clear — so Daris Jackson, chair of Community Board 8’s housing committee, has taken on the project, pushing to secure funding for the Marble Hill Community Center in next year’s city budget.
HIRAM ALEJANDRO DURÁN
Previous Next
By KIRSTYN BRENDLEN

There is usually a time and place for community boards to talk about participatory funding — the rather longshot method of convincing city council members to fund specific neighborhood projects.

But Daris Jackson isn’t waiting for all that. Instead, Community Board 8’s housing chair is ready to push now for the necessary funds — possibly from the board’s own bank account to make the Marble Hill Community Center a destination again.

Located on the bottom floor of Marble Hill Houses on Broadway, the community center is home to programs for youth and senior citizens alike through the Mosholu Montefiore Community Center. Kids come for everything from homework help to prep for standardized tests and college applications.

They also come for fun. In normal years, neighborhood youngsters — especially from the New York City Housing Authority complex — could dance, play sports, and hang out with their peers at the community center.

But while the community might enjoy the programming, the physical structure holding the community center is far from enjoyable, Jackson said. It’s something he’s discovered when the center hosts the occasional community board meeting, or a gathering of the Marble Hill Tenants Association meetings.

“One of the things we noticed when we had a meeting at Marble Hill last year was that there were some infrastructure issues with plumbing, the pipes. There were issues with the roof,” Jackson said. “The structure of the roof is compromised, and that causes leaks. And there’s a concern about mold. There are a number of issues they are facing.”

But that was the beginning of 2020, just before the coronavirus pandemic sent community board meetings online and shuttered most activities at the center.

Yet the community center issues stayed on Jackson’s mind, to the point he finally decided to bring it up during a recent housing committee meeting to see how others felt about it. Obviously, he said, no one lives in the community center, so it’s a little out of the committee’s usual wheelhouse. But then again, it doesn’t really fit snugly into anyone else’s community board committee — either youth or aging could take it on, or maybe parks and recreation.

But Jackson already had witnessed the issues firsthand, and he worried that if he didn’t introduce it to his committee now, funding might fall through the cracks.

“The community center … provides so many valuable resources to the community members, and it’s affecting the way people live, I think, the conditions of the community center,” Jackson said. “They’re just not able to provide a number of services because of their infrastructure concerns. So I tried to come up with a way we can kind of capture that and acknowledge it.”

During that last meeting at the community center, many committee members shivered because of the broken heat and watched water drip through the ceiling, forcing them to set the room up differently to avoid the leaks.

After the meeting, several reached out to say they wanted to take up the issue.

“I was really happy that that was the response, as opposed to, ‘We don’t have time for this,’ or ‘This isn’t a pressing issue,’” Jackson said. “It was a promise that we did make at the committee level to the stakeholders — particularly the folks at the Marble Hill Community Center — because they’ve been great about letting us use their space to engage their residents.”

That included events or simply allowing Jackson to drop off flyers letting people know about upcoming meetings and events. The center is a hub of information for many people, he said, especially for those who might not necessarily have regular access to the internet.

Jackson’s next step will be trying to figure out how — and if — the issue can be worked into the board’s limited budget.

“We just finished our budget process for fiscal year 2022, and some of the NYCHA concerns were ranked higher this year than they have been in previous years, so the housing committee was very excited about that,” he said. “For the three years that I’ve been chair, we’ve been pushing for that.”

Yet, Jackson admits the community board’s budgeting process is complex. Because of that, he can’t guarantee funding can be secured this year for the community center repairs.

The 2021 city budget was hotly contested, and, in the end, did provide some extra funds for Cornerstones programs like the one MMCC runs in Marble Hill, and funding for NYCHA recreation centers. MMCC also picked up some additional dollars from councilmen Andrew Cohen and Ydanis Rodriguez, although it’s unclear if that money could be used for community center repairs.

A request for comment from MMCC on Monday night was not immediately returned.

“If we can’t, I would like for us to go to Marble Hill Community Center and say we did make a good-faith attempt at a way to capture this, but we can’t,” Jackson said. “But here’s what we’ve come up with on ways that maybe we can assist with getting this done.

“Maybe we can pass a resolution highlighting the impact this is having on the community. I don’t know. But I would like for it to be brainstormed on and considered by everyone on the committee.”