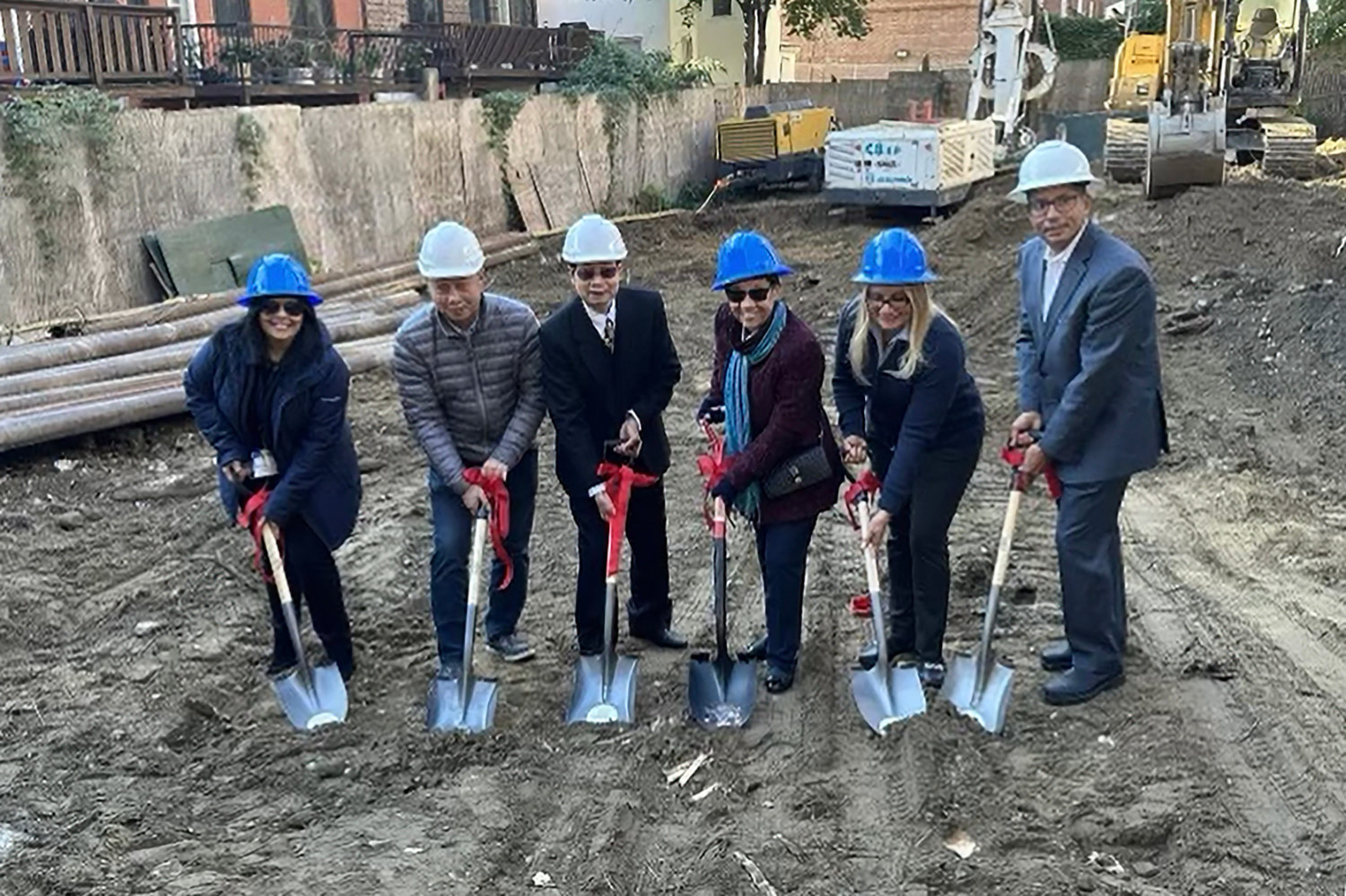 Members of the International Leadership Charter School administration and the developer break ground in a ceremony recently where a new middle school is being built.
Contributed photo 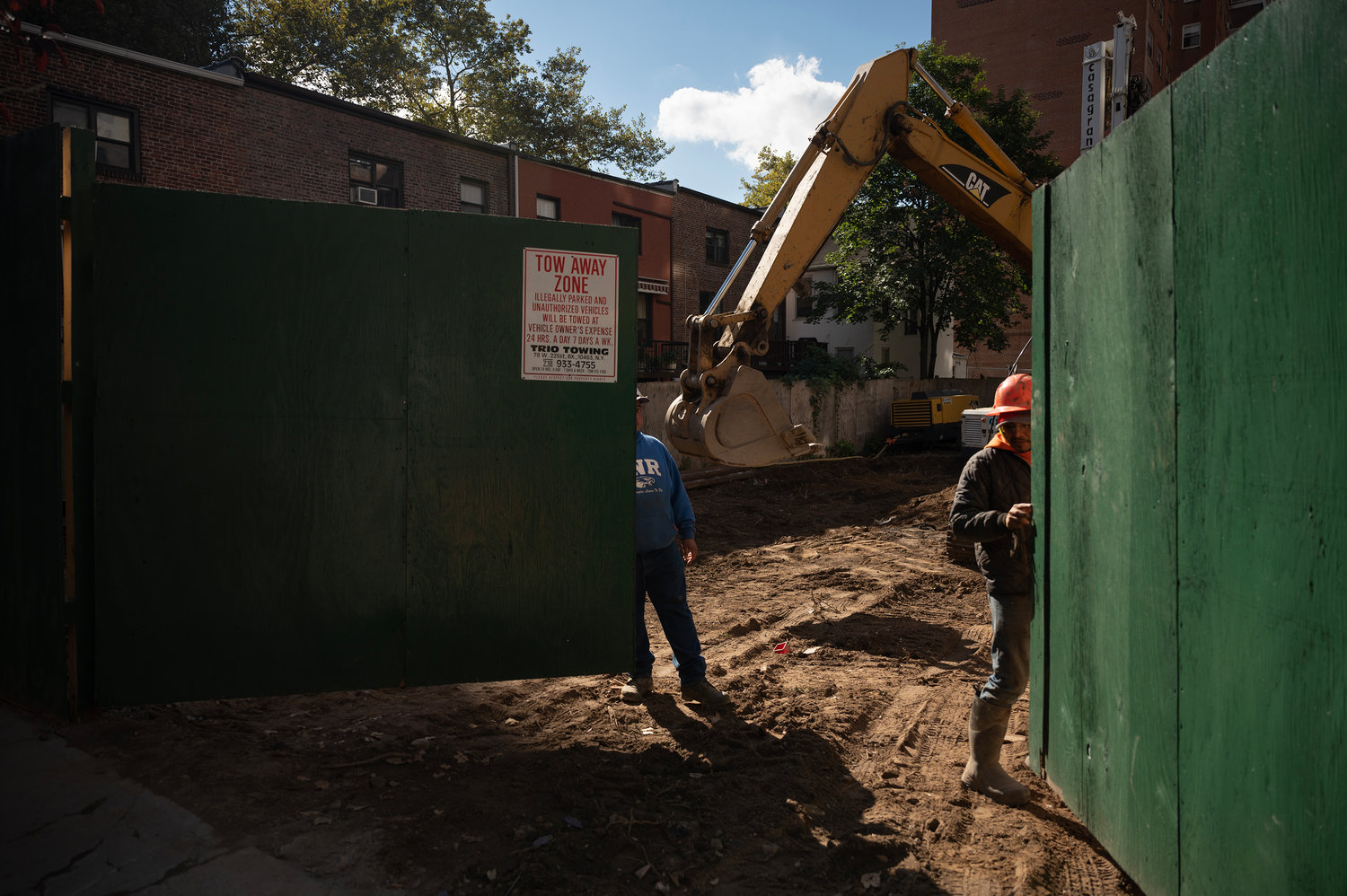 Workers at the site of the proposed International Leadership Charter middle school close the gate as they begin work.
Hiram Alejandro Durán
Previous Next
By Stacy Driks

“From the school’s perspective, the reason to do the project is to tie something into their high school,” said Alex Weis, principal of Matter Real Estate, a firm that represents the school. “The middle school needed a home, and there was a need for space for it.”

The groundbreaking of their state-of-the-art building, which took place Oct 19, starts a process where the new school expects to open its doors at 306 W. 232nd St., in 2024.

“Designing the new middle school has been a labor of love, from inception to its fruition today,” said developer Panstar Realty president Tzu-Ben Chen.

An application was sent to the city in April for a seven-story building back in April and Panstar Realty, a limited liability corporation, purchased the property in September 2020 for $1.19 million, according to city property records.

“The community is very supportive,” said Evelyn Velez, who will be the director of school curriculum and instruction for the new middle school. She will lead the schools vision to the future of science and technology.

“The pandemic impacted our children’s learning as recently released New York City test score data show, and we are answering the call of our children during this critical time,” Velez said.

During the pandemic, learning loss was something that was too familiar with families. Test scores released in September by the department of education showed the proof. Almost 38 percent of students showed proficiency in math — compared to 46 percent in 2019.

The middle school will focus on STEAM, which includes robotics and coding.

Through its curriculum they hope to increase the lower test scores.

For eight consecutive years, the charter high school has been recognized one of the best high schools in the Bronx by U.S. News & World Report. In 2018 it had a 99 percent graduation rate.

Assemblyman Jeffrey Dinowitz said he’s happy the high school is expanding. However, there are pressing concerns that he has for the community.

“It’s a quiet residential area, I think the location is problematic,” he said.

Chen said the new building will keep the same characteristics of the neighborhood. Meaning, they will resemble red-brown style brick homes.

A recent post on Facebook stirred a debate over whether their property value will increase or decrease.

Weis told The Riverdale Press he can’t find a way to connect the dots between a new school to property values. Matter Real Estate has been around since 2017 and has worked with school projects in the past.

He continued to explain residents might be sensitive about their rent while living in New York City and are fearful of any new project will change rents or values.

The only way for property value to increase will have be if someone built market rate housing, according to some experts.

“Unfortunately, I can’t decide where anything gets built,” Dinowitz said.

He prefers to have affordable housing, rather than a school. To him there does not need to be a school since there are several nearby. One block away is P.S. 7 Milton Fein School.

A stone’s throw away is Amber Charter Middle School.

“I lived there so long that I knew that neighborhood inside and out,” Dinowitz said.

He feels sentimental about the neighborhood. He recalls some challenges coming down south on Irwin Avenue and on West 232nd Street. It is a small street with little to no traffic.

He believes that will change.

Chen said most students walk to school, while only 15 percent of parents are expected to drive their children. He assures that congestion won’t be an issue, as the school is expected to have 400 students.

There is no doubt in Dinowitz’s mind that construction will clog the street up replacing residential parking spaces.

Construction began in mid-October and now there is a small section of the street blocked with construction markers, which are about the same size as the width of the empty parking lot.

The city’s parking regulations govern where vehicles can stop and park their car. School zones are effective whenever school is open, but not so during summer or the holidays.

The charter school signed a long-term lease of 30 years for the property on West 232nd.