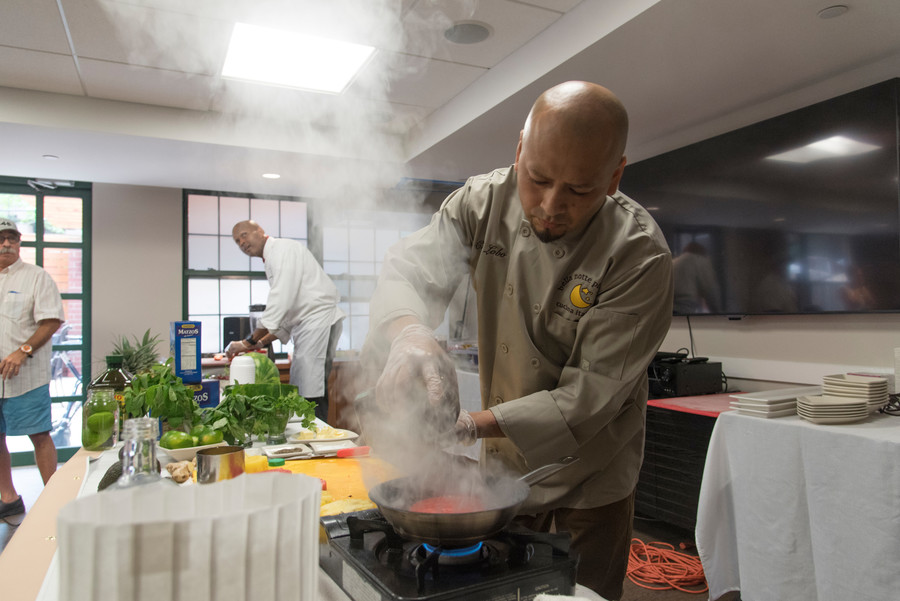 It was the competition where the knives, plates and food came out, as the chefs of the Atria Riverdale and Bella Notte Pizzeria showed off their culinary prowess during the Atria’s 2016 Chef Showdown.

The Atria’s chef Nico Jones and Bella Notte’s chef Lobo – who does not use a first name – sliced, diced, caramelized and pan-seared ingredients for the challenge at the Atria, an assisted living facility for seniors. Three judges and an audience of more than 25 residents watched the chefs prepare kosher dishes.

The twist was that watermelon had to be an ingredient.

Mr. Jones made a watermelon salad – a dish that, he said, was “inspired by a dream.” He roasted almonds, grilled tomatoes and pineapple and pan-seared chicken breast strips, which he marinated a day earlier in a citrus mango vinaigrette – a concoction of lemon, orange, olive oil and mango.

The contest provided residents with a fun-filled event for the day, and a local eatery with a chance to work with the Atria Riverdale.

The showdown aimed to give residents something different in their day and to encourage the Atria community to come together, Mr. Jones said, as he roasted almonds.

“Anything that we can do to be involved with the community is great,” said Bella Notte Pizzeria co-owner Ben Hoff.

Atria resident Carla Ryan said she liked cooking shows – and a contest between her friend Nico and her favorite neighborhood restaurant’s chef was a particularly enjoyable event.

“I am so impressed, so impressed with what Atria has presented to us here in the community and the people here,” Ms. Ryan said. “It was a welcome change from the day-to-day usual activities.”

Marcy Berlin, another resident, agreed: “It’s a breath of fresh air to get something different, whether it’s somebody cooking or whatever,” she said. “They made an effort to bring in people we normally wouldn’t be hearing or seeing.”

But the joy came with a “tinge of sadness,” a reminder of the everyday things that residents of an assisted-living facility miss, she said.

The three judges were New York State Assemblyman Jeff Dinowitz, the chief of Rabbani Events – a catering company for non-profits – Sara Rabbani, and an Atria resident, Bernice Heller. They scored the dishes on the taste, presentation and originality.

The audience had their picks. Ms. Ryan said it was a tough call, but she preferred chef Lobo’s dish in the end. Ms. Berlin said she liked both dishes and could not pick a winner. “I don’t think I had a favorite. I liked both of them,” she said.

The winner was Chef Lobo. His winning creation will not, however, be available at Bella Notte Pizzeria. Mr. Huff said the dish was outside of what Bella Notte, which makes traditional Italian food, serves.

“Thank you, Chef Lobo, for knocking our socks off,” said Rena Hyman, Atria Riverdale’s executive director. “Thank you, Nico, for being amazing every single day.”