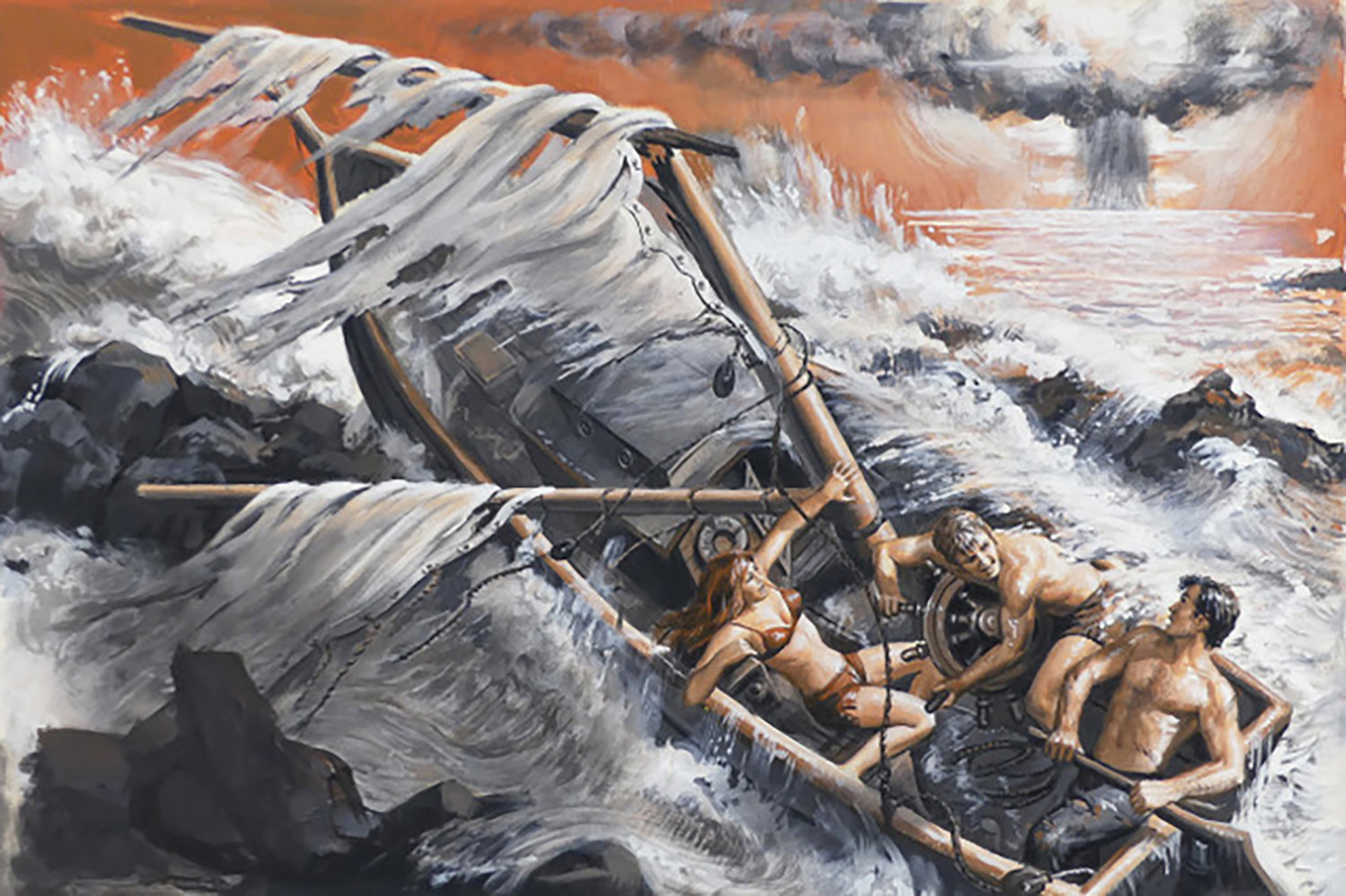 Daniel Cooney thinks he might own the only art gallery in the city displaying work by a pulp artist. His exhibit ‘Action’ displays work by Samson Pollen, who illustrated this piece, ‘We’re Trapped in an H-Bomb Fall Out Zone’ for Stag magazine.
Courtesy of Daniel Cooney Fine Art New York 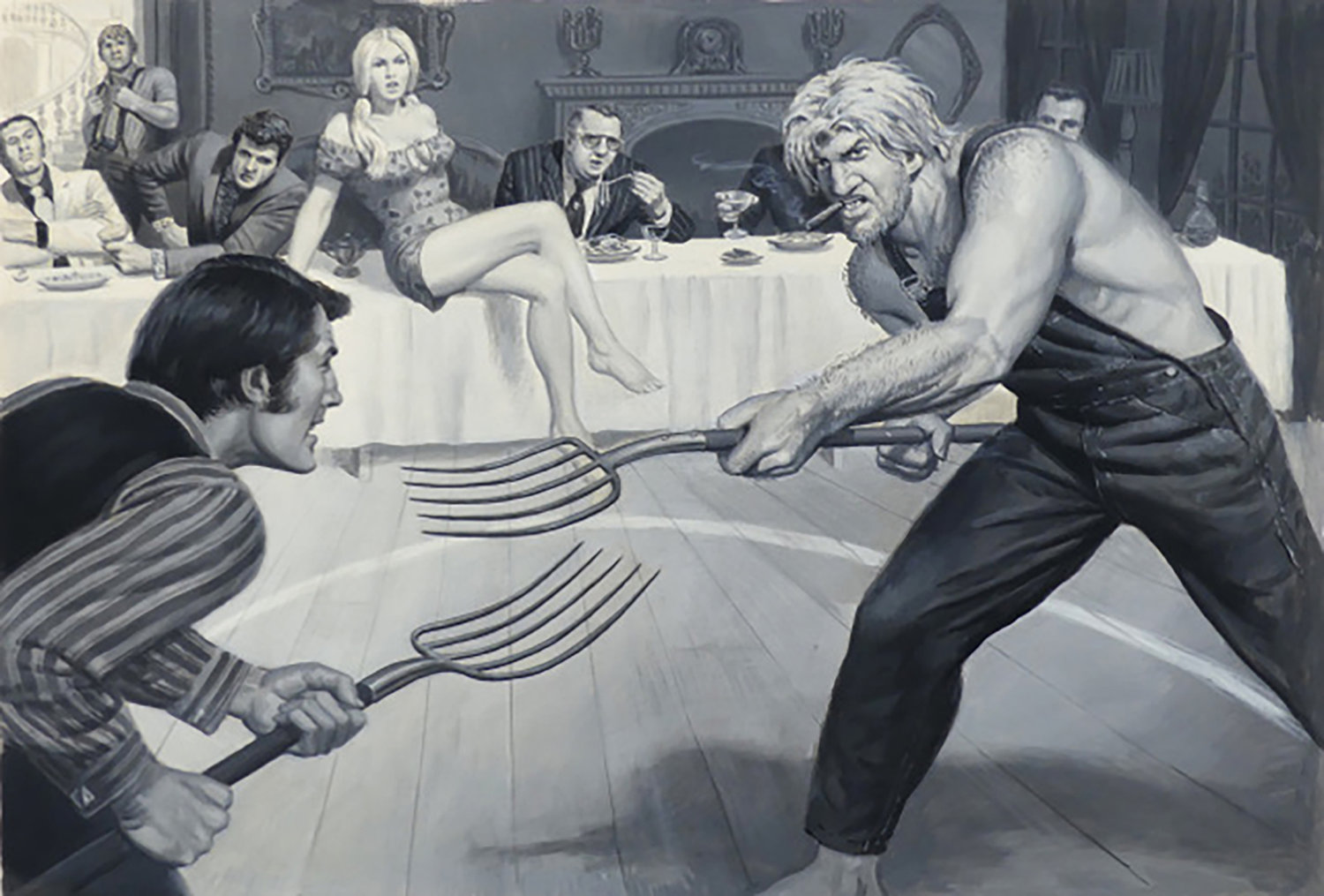 Samson Pollen was one of the most prolific commercial pulp artists of the 20th century. This piece, titled ‘Split Open the Mafias Hillbilly Fortress,’ was done for Stag magazine.
Courtesy of Daniel Cooney Fine Art New York 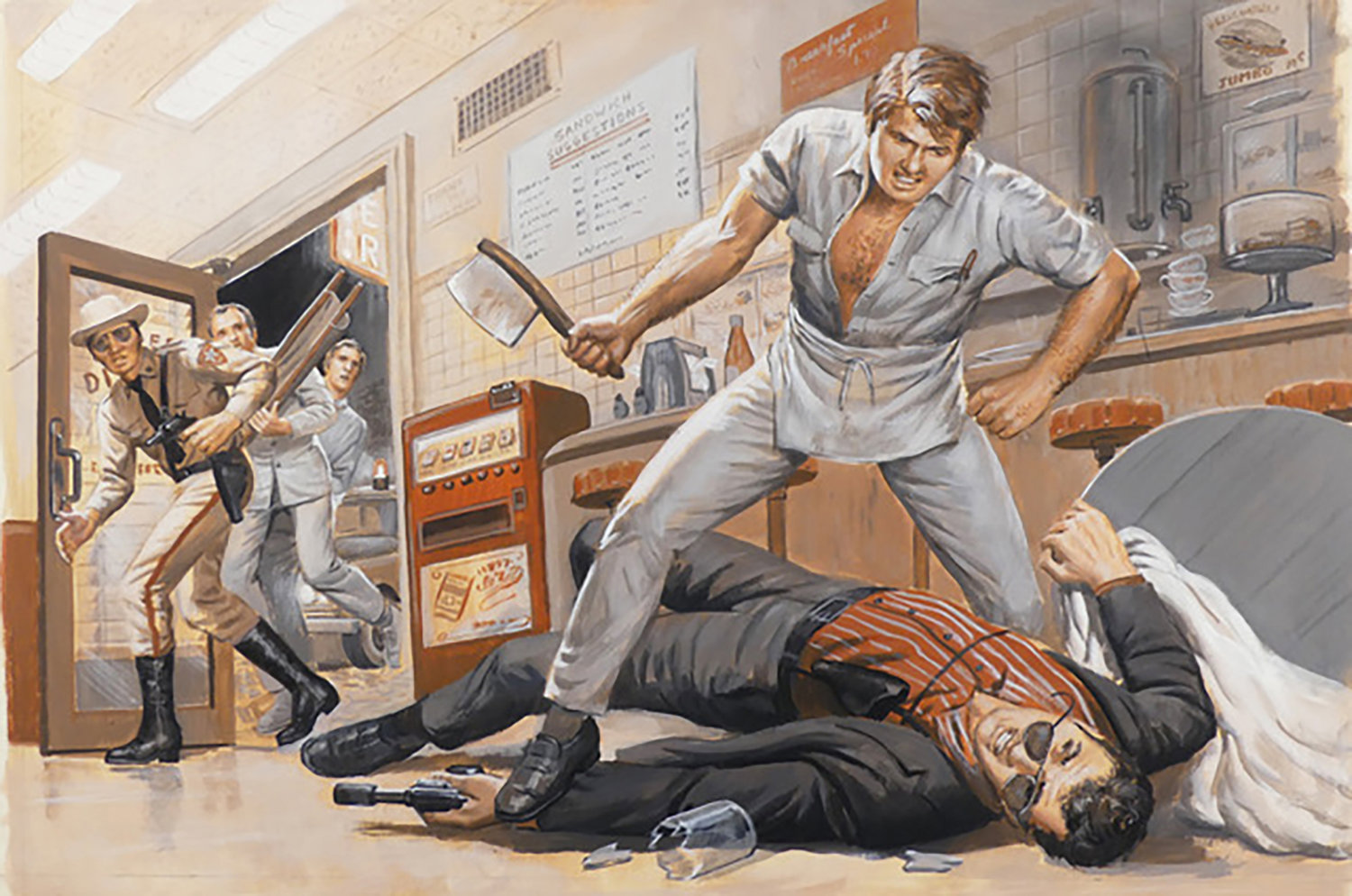 Much of pulp artist Samson Pollen’s work was published in the men’s action magazines of the mid-to-late 20th century. This piece, titled ‘Contract Killer on Cemetery Hill’ appeared in Stag.
Courtesy of Daniel Cooney Fine Art New York
Previous Next
If you go ...

Daniel Cooney thinks he might own the only art gallery in the entire city showcasing a pulp artist. But when the artist in question is Samson Pollen, he thinks such a title is worth having.

Samson was one of the most prolific commercial illustrators of the mid-20th century. In a career that spanned some 40 years before his 2018 death, he created cover art for novels of many different genres — action, adventure, young adult and even romance. But he also was well-known for his hundreds of paintings for men’s action magazines, which became a prominent genre post-World War II.

But as early as this past summer, Cooney didn’t even know who Samson was. And he learned of his work through somebody who knew somebody — a way which didn’t often inspire confidence for Cooney in the past.

This friend-of-a-friend’s recommendation, however, was different.

Sometimes “someone will call and say, ‘You should look at my cousin,’ which usually goes absolutely nowhere,” Cooney said. “Once I saw (the paintings) … they’re just so incredible. There’s just like such a craftsmanship to them. And they’re just not something you see in contemporary art galleries.”

In this chance encounter, Cooney met Samson’s widow, Jacqueline. She’d preserved Samson’s studio, stationed in the second bedroom of their Manhattan apartment. And it wasn’t long before Cooney knew he wanted to display some of Samson’s previously unseen pieces.

And while people might have seen Samson’s art on a magazine page — or on a book cover — Cooney thinks there’s something unique about seeing the work on its original canvas.

“When you work (in) illustration, most people might know the work, but they’ve never seen the pieces in person,” Cooney said. “They’re painted with brushes and paints, but really the product is that flat illustration on the magazine, or the cover of a book. But to see the actual fingerprints (on) the piece is really sort of revelatory for some people.”

Jacqueline Pollen has nothing short of a star-studded view of her late husband. And although she described him as one of the most talented artists she’s ever known, she noted Samson personally hated the word.

“He always said to me, ‘I don’t like when people say “talent.” It’s a lot of hard work,’” Jacqueline said. “But he was especially gifted.”

Samson was born in the Bronx in 1931, spending the early years of his life on Manor Avenue in Soundview. By the time his family moved to Brooklyn so his sister could attend college, he was already demonstrating an artistic proclivity.

Thankfully, Jacqueline said, his family was supportive and nurtured his talent in any way they possibly could.

“They weren’t very rich people, but they set up their living room as his studio, to learn how to draw,” Jacqueline said. “Anything he needed: paints, canvas, anything, to study and draw. Especially his mother dedicated herself to developing that skill.”

And every so often, Jacqueline herself would appear in some of her husband’s work. Samson took a break from drawing for a few years in the 1970s, which Jacqueline attributed to burnout. But when he ventured back to the canvas, he did a few sample pieces of Jacqueline — one of which now hangs in her living room.

But even when she wasn’t the subject of one of his pieces, Jacqueline was particularly fond of how Samson illustrated women. According to a release from Cooney’s gallery, the men’s action magazines where Samson’s art would often appear were “replete with plenty of cheesecake pin-up girls” and “packed with mouth-watering eye candy.”

But Jacqueline felt her husband illustrated his subjects differently.

“His women were not only gorgeous, but very strong women,” Jacqueline said. “Strong-willed women, not cowering in a corner. And here we are.”

While Jacqueline is thrilled her husband’s unseen work will be on display for the world to see, she’s keeping some of his pieces to herself. Her favorite hangs in her living room, and it will stay there so she can see it every day and think of him.

“My hope is that they are absolutely awestruck by the way that these paintings look,” Jacqueline said. “They’re just too marvelous. They jump out. They speak to you. They tell a story. Just look at them, and you can’t take your eyes off of these paintings.”

By showcasing Samson’s detail-driven, leaping-off-the-page work, Cooney hopes those who come to the exhibition will re-evaluate what they consider art to be — and not restrict Samson from that definition simply because he was a commission artist.

“This work has been sitting in this apartment for literally decades, with no one really seeing it or taking it seriously,” Cooney said. “Samson was an artist his entire life, from high school until he died when he was in his late 80s. And he was a practicing artist that whole time, and this is his first exhibition because his venue was magazines (and) book covers.”