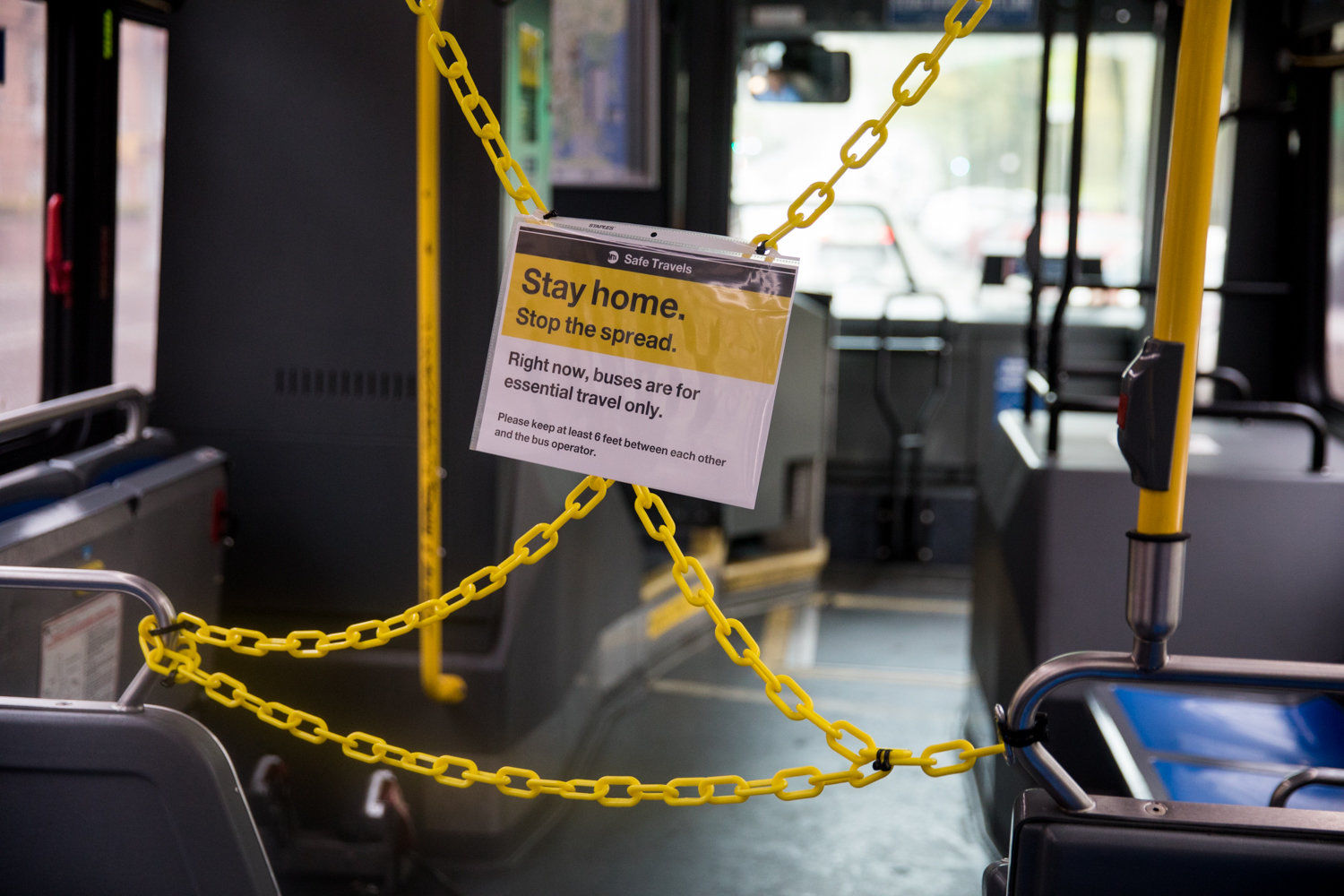 A sign hangs in front of a roped-off section of a bus informing passengers that buses citywide are for essential travel only. The city’s bus network is one of the hardest hit areas of the MTA since the advent of the coronavirus pandemic, which has seen ridership plummet. Mayor Bill de Blasio has decided to defund the Better Buses Action Plan, intended to speed up bus service.
JULIUS CONSTANTINE MOTAL 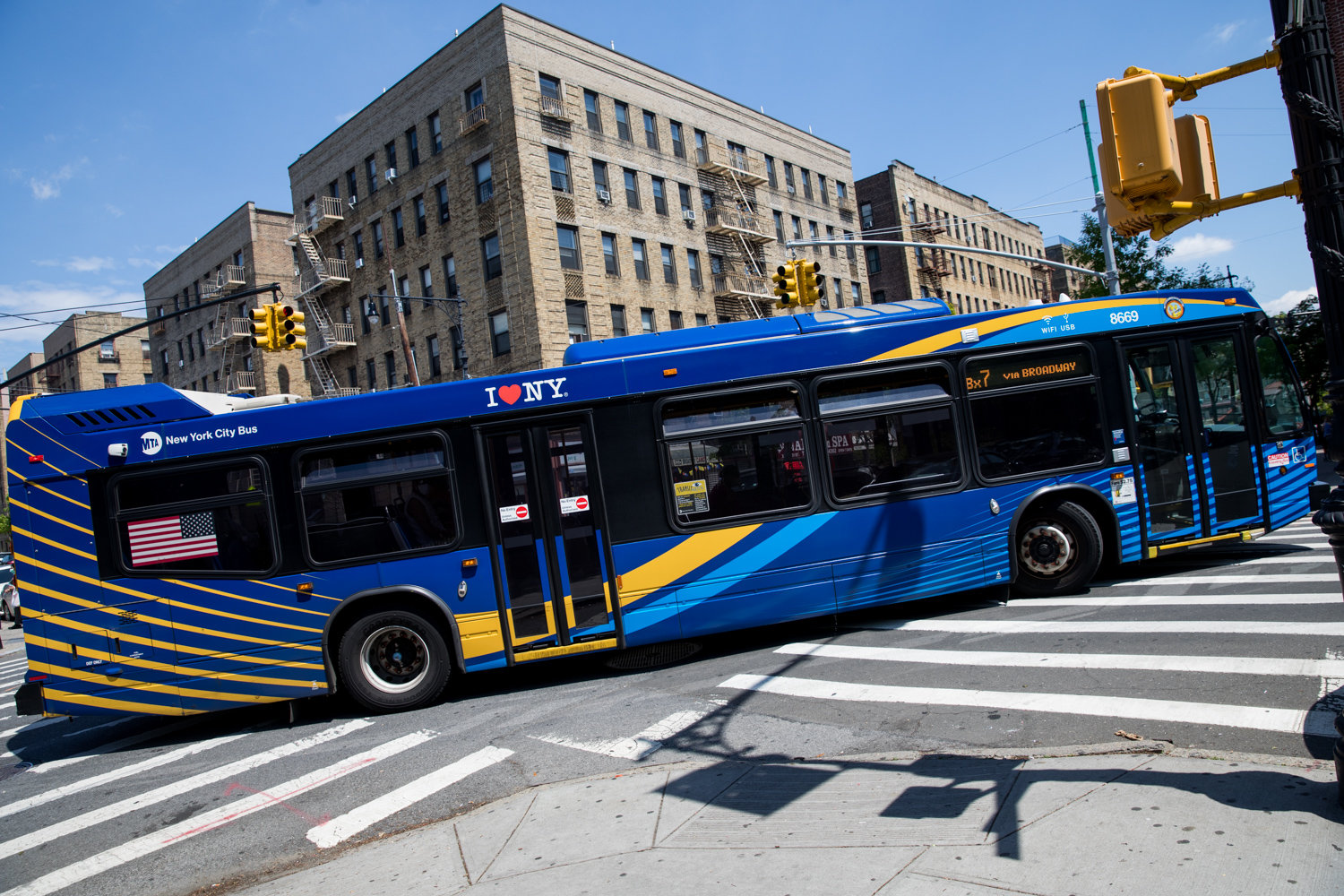 A Bx7 bus turns onto Kingsbridge Avenue from West 231st Street. The city’s buses are now operating free of charge due to the coronavirus pandemic. In an effort to protect drivers from potential infection, the front section where they are is roped off. Mayor Bill de Blasio has abandoned his Better Buses Action Plan that has intended to improve bus service.
JULIUS CONSTANTINE MOTAL 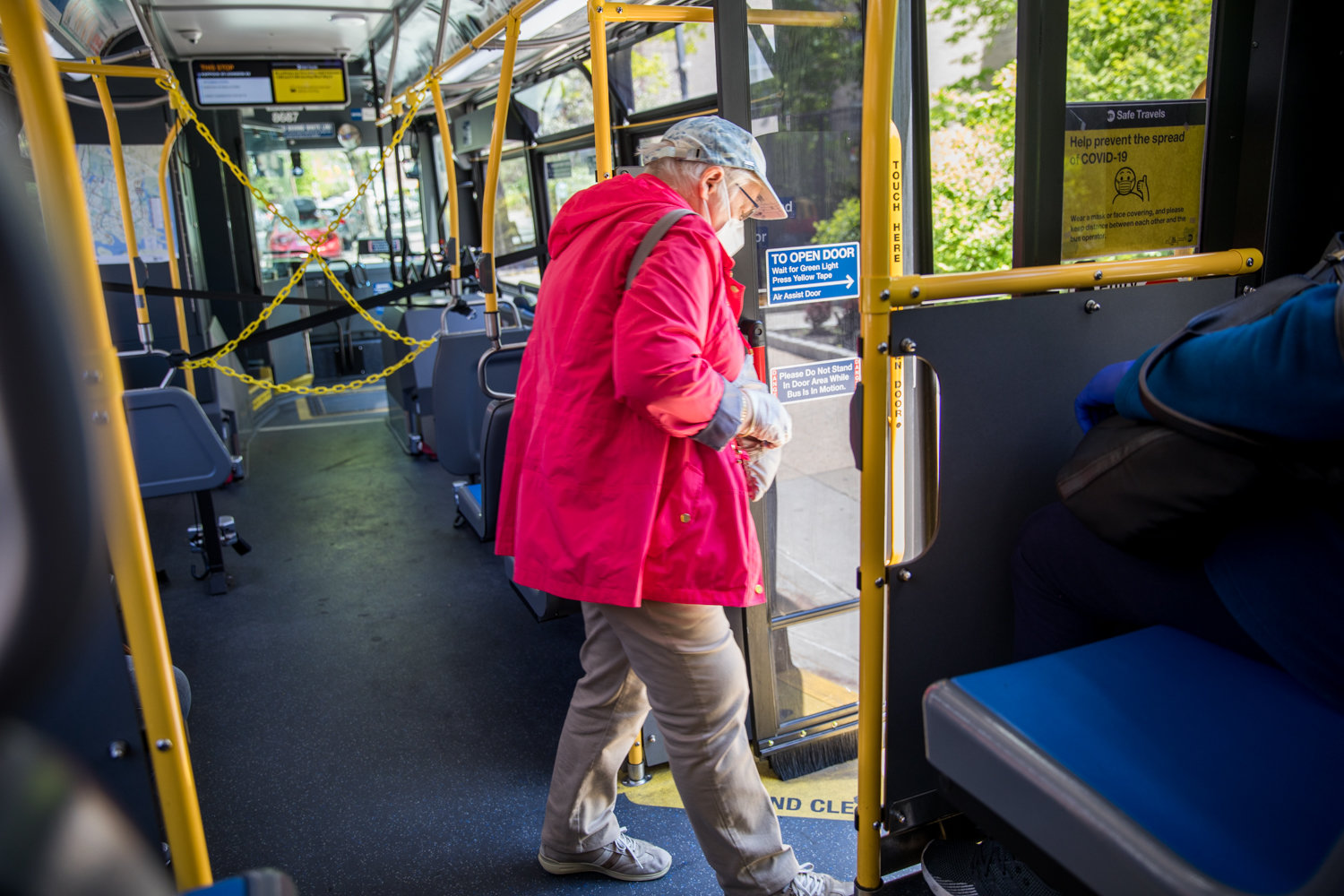 The city’s bus network has changed drastically since the advent of the coronavirus pandemic. In an effort to protect drivers, the front section of each bus is roped off, causing passengers to board through the back, and avoiding the fare box along the way. Mayor Bill de Blasio has defunded the Better Buses Action Plan for now, which was intended to speed up transit service in the city.
JULIUS CONSTANTINE MOTAL 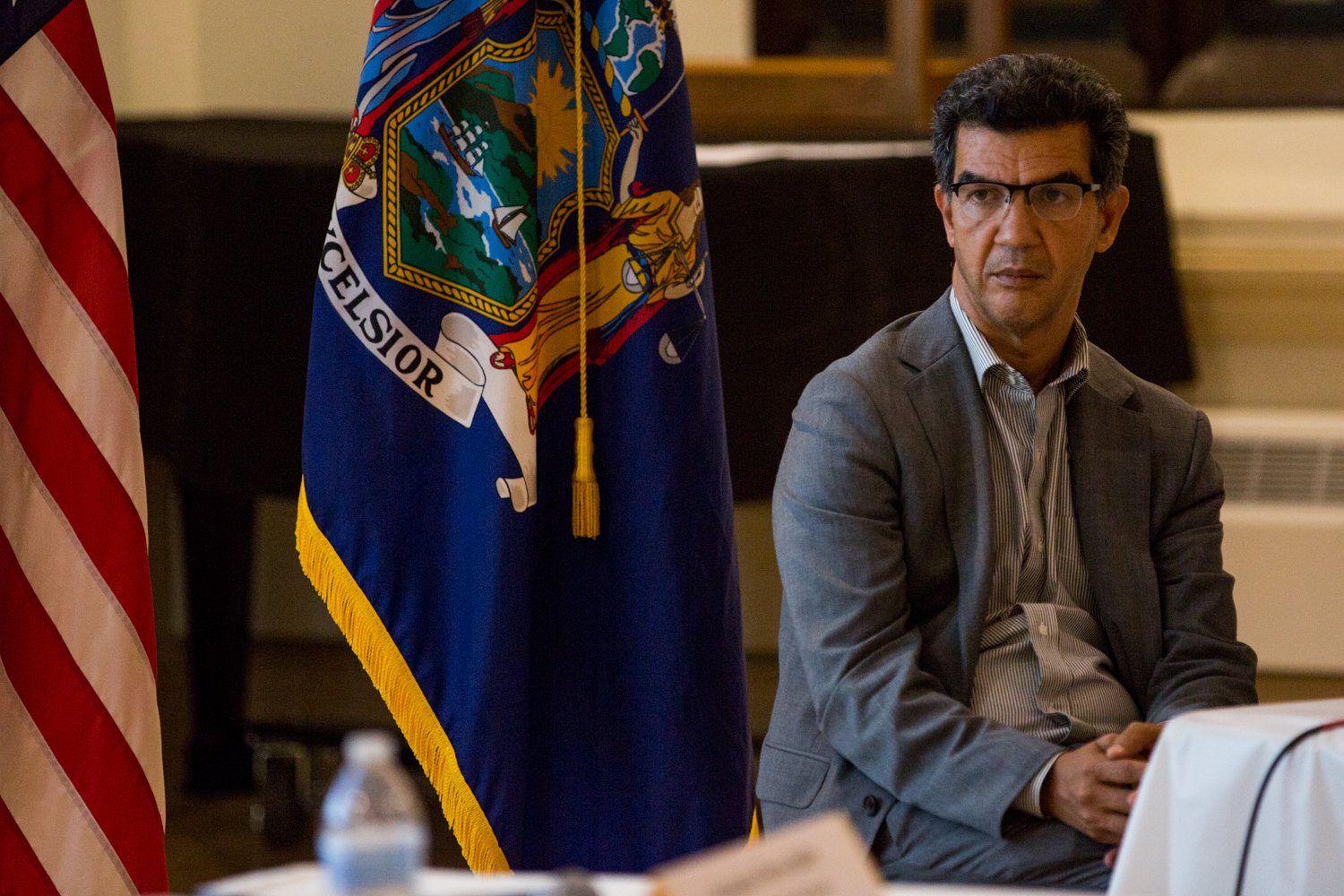 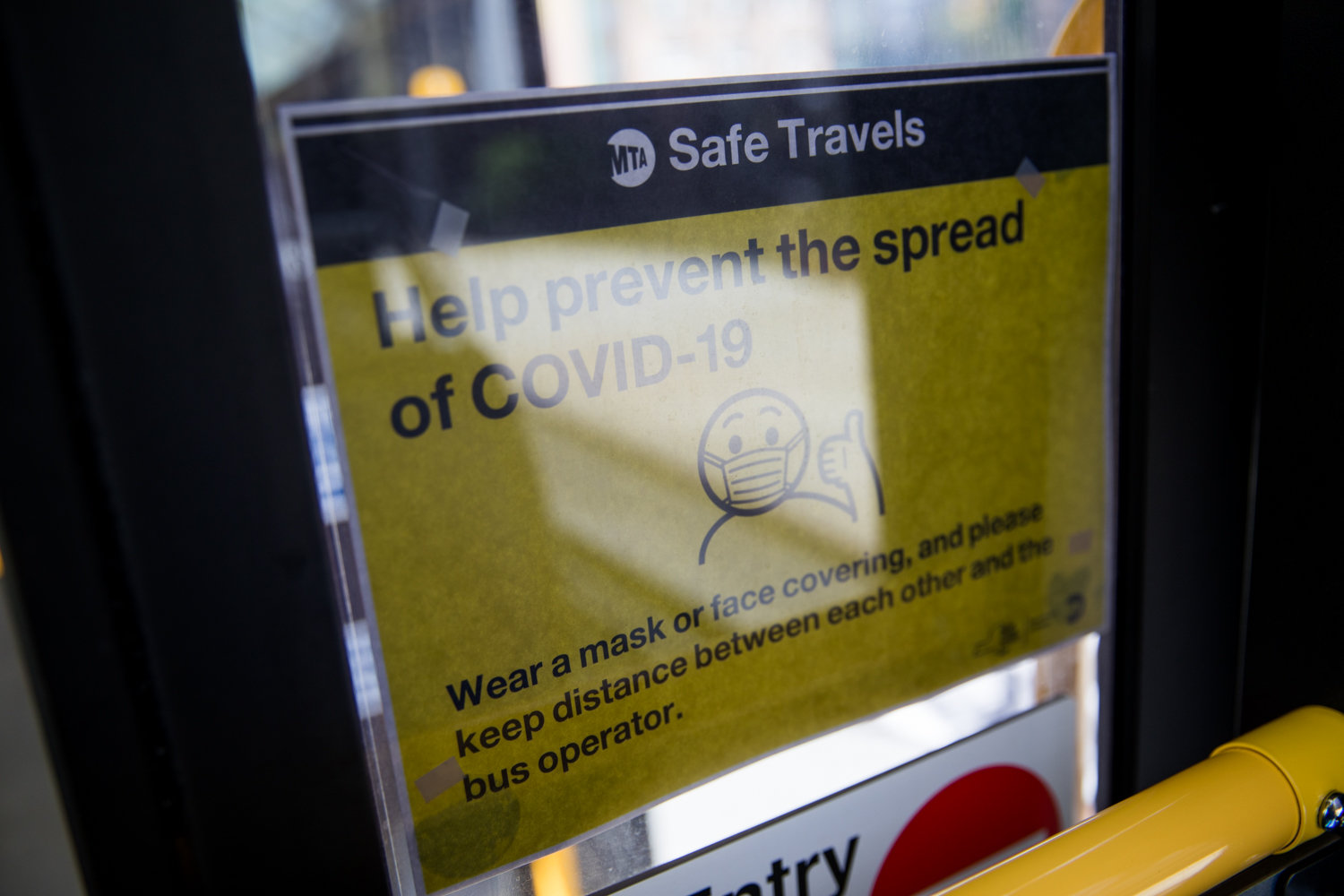 A sign inside a Bx10 bus urges passengers to wear a face covering and maintain distances between the driver and each other in order to help slow the spread of the coronavirus that causes COVID-19. Since the advent of the pandemic, Mayor Bill de Blasio has pulled money out of his Better Buses Action Plan, which he said would speed up mass transit with the improvement and construction of bus-only lanes.
JULIUS CONSTANTINE MOTAL
Previous Next
By PATRICK LINDO

It was a project intended to boost average bus speeds by as much as 25 percent through improvements and new construction of bus-only lanes, including a planned lane on Broadway through Marble Hill.

But it seems the coronavirus has claimed yet another victim as Mayor Bill de Blasio has put the brakes on his Better Buses Action Plan as the city scrambles to make up for budget shortfalls caused by the current economic turmoil.

When asked by reporters about his decision to defund the Better Buses program, despite previously saying that he would draft a plan for car reduction, de Blasio reasoned that priorities have shifted.

“The most basic things are health, safety, food (and) shelter,” the mayor said during an April 16 coronavirus briefing. “So, we’re going to focus there first.”

de Blasio acknowledged that such programs like Better Buses were necessary — especially when the city tries to return to normal — but basic necessities were far more important.

But that doesn’t mean Better Buses is dead. It could be part of a post-pandemic world.

“There’s no question that a lot of the other things are very important,” de Blasio said. “That’s why we put them in the budget to begin with, and they will continue as we have more resources in the future.”

The mayor might be looking for money that he can shift around in the city budget, but not everyone is happy with better transit becoming a victim, like Councilman Ydanis Rodriguez, who represents the area around the stretch of Broadway that was supposed to get a bus-only lane.

And then there’s the inevitable reopening of the city, the councilman added. Many rely on buses, especially in low-income communities, immigrant neighborhoods, and among the elderly and mobility impaired, all of whom Rodriguez says would be disproportionately impacted, as they have throughout the pandemic.

“Having access to reliable and frequent bus service will help bring racial and economic justice to bus-dependent communities,” Rodriguez said in his letter.

Vittorio Bugatti, founder of the Express Bus Advocacy Facebook group, also stressed how important it is the city’s transportation system remains focused on reopening.  Bugatti — who still depends on express buses from his Riverdale home, even during the coronavirus crisis — says the city and the Metropolitan Transportation Authority should be looking to entice riders back onto buses, especially as many say it might be a long time before they feel safe from disease on mass transit in the wake of the pandemic.

“It’s extremely important that we maintain it,” Bugatti said of the plan.

Some observers fear many might turn away from buses and trains when the city reopens, and instead rely on cars and services like Uber to get around. Drawing commuters back to buses will likely be a top priority, Bugatti said, which is why programs such as Better Buses needs more advocacy from the mayor’s office rather than funding cuts.

More cars mean more congestion, Rodriguez said, creating environmental and health concerns. With cars off the road right now during the statewide stay-at-home orders, air quality has substantially improved. But if and when the city reopens, without better preparations, the councilman fears an environmental relapse.

“The city should plan for an increase in automobile traffic that could be worse than pre-pandemic levels,” Rodriguez said, “leaving millions of riders in endless traffic, and destroying air quality — making millions more vulnerable to respiratory illness.

Danny Vaughn, a member of Bugatti’s transit advocacy group, said that while he’s still concerned about unsanitary conditions on buses, a better, quicker, more reliable service would be a boon to the city. Changes like those detailed in the Better Buses plan, he added, are necessary to achieve it.

de Blasio unveiled the Better Buses Action Plan a year ago, with an eye to speed up buses by 25 percent by the end of 2020. Those plans include not just bus-only lanes, but also a mix of improvements to the system overall like new routes, better accessibility to bus stops, real-time schedule information, enforcement of bus lane rules, and improvements to buses themselves, including a push for all-electric vehicles.