City council candidates get some respite from COVID 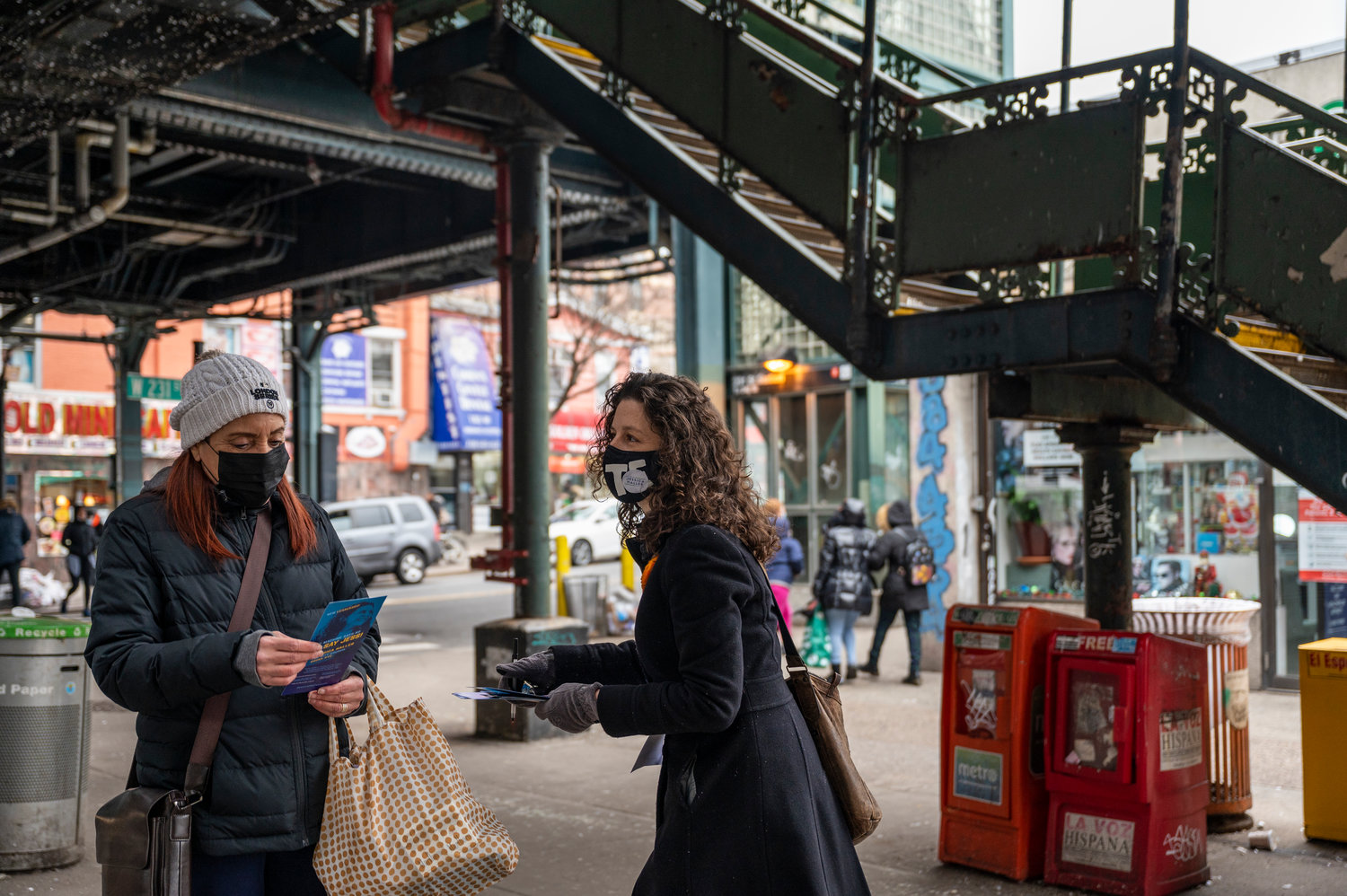 Jessica Haller collected signatures and spoke to voters below the West 231st Street 1 train station in Kingsbridge Monday. Haller was one of the city council candidates calling for Gov. Andrew Cuomo to lower the signature threshold to get on the special election ballot amid the coronavirus pandemic, which he finally did over the weekend.
HIRAM ALEJANDRO DURÃN 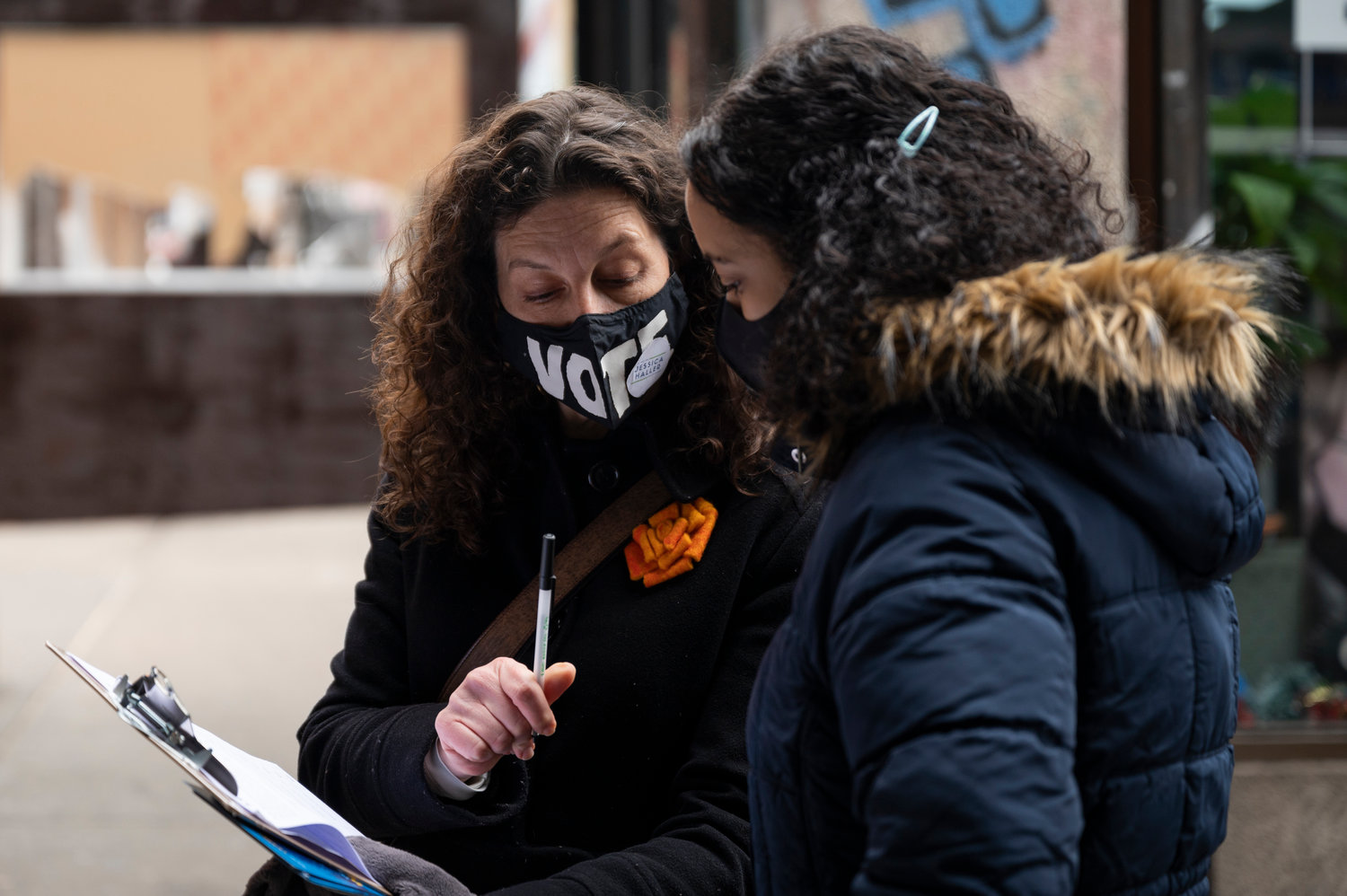 Jessica Haller, one of the city council candidates running for the seat once held by Andrew Cohen, said she’s taken several precautions to keep herself and her volunteers safe from COVID-19. Gov. Andrew Cuomo added one other small piece of assistance over the weekend, lowering the signature threshold needed for city council candidates to get on the special election ballot.
HIRAM ALEJANDRO DURÃN 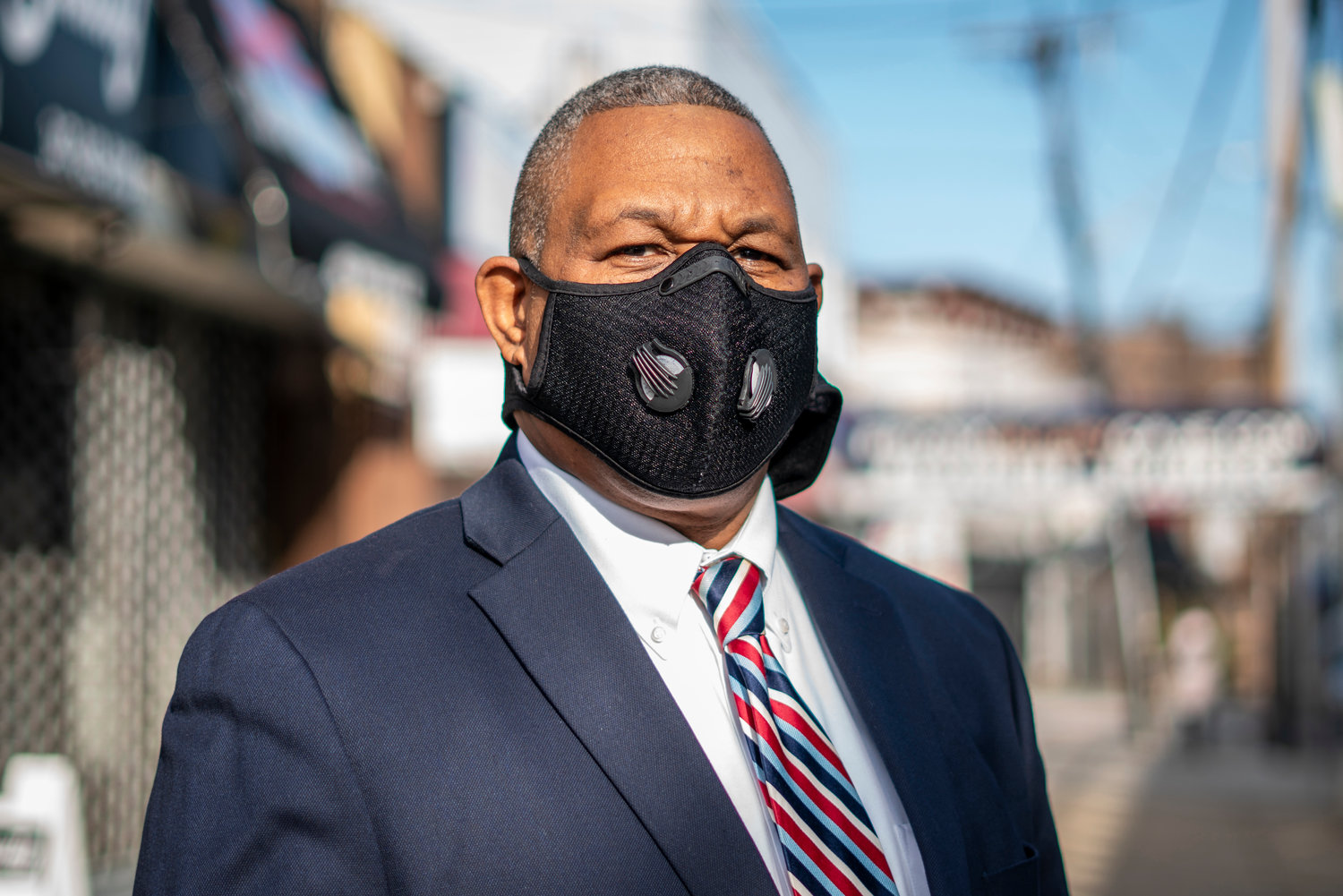 Carlton Berkley is petitioning on the street and in apartment buildings in an effort to collect enough signatures to qualify for the March 23 special city council election. Berkley was one of the candidates who called on Gov. Andrew Cuomo to waive the petitioning requirement during the coronavirus pandemic. Instead, the governor lowered the threshold Saturday by 30 percent.
HIRAM ALEJANDRO DURÁN 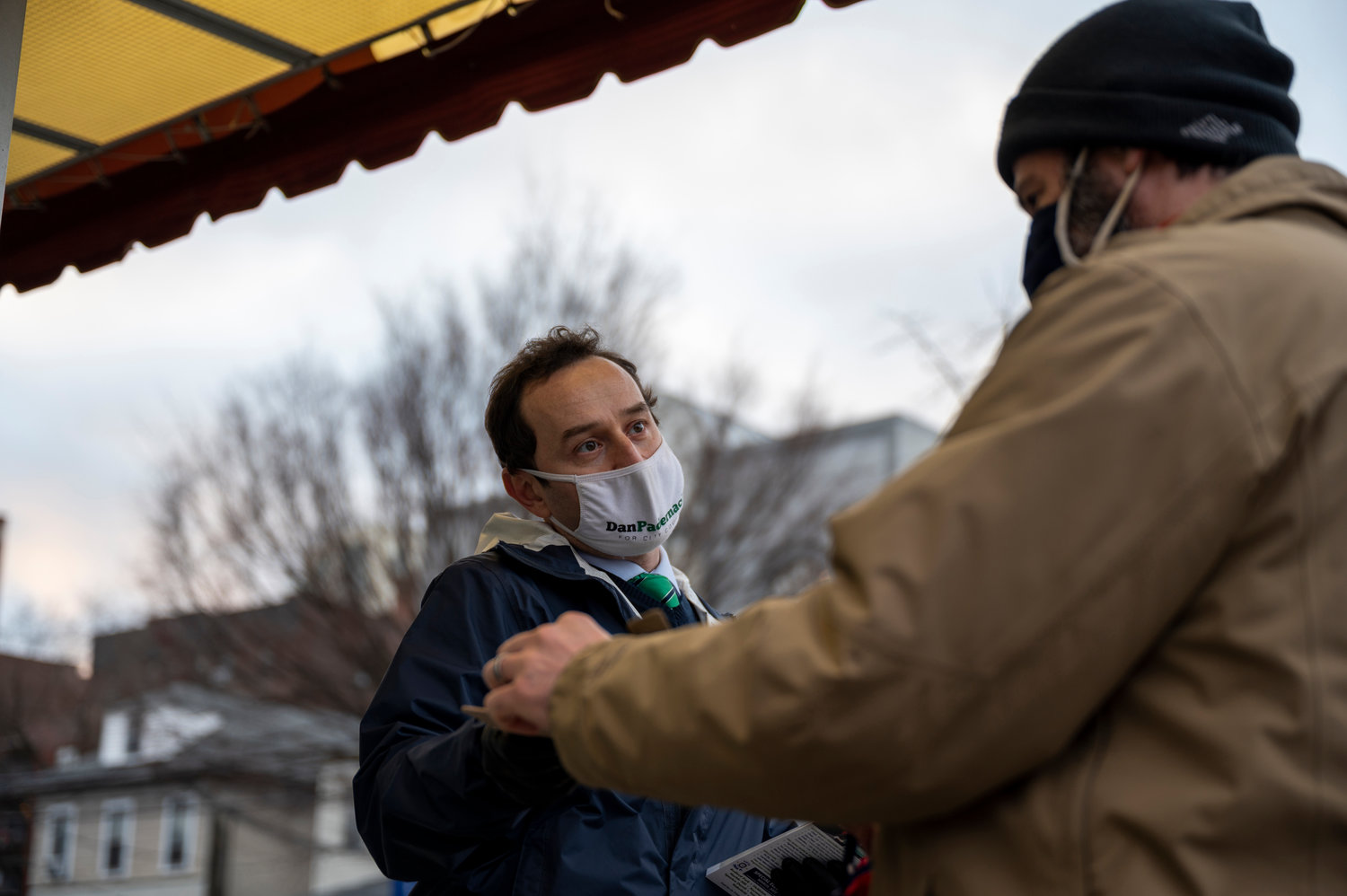 Dan Padernacht, one of the candidates running for Andrew Cohen’s former city council seat, says he and his volunteers are wearing gloves and sanitizing pens in an attempt to protect petition signees from the coronavirus. Gov. Andrew Cuomo lowered the signature threshold for special election candidates Saturday, something Padernacht had pushed for over the past couple of weeks.
HIRAM ALEJANDRO DURÃN/ File
Previous Next
By ETHAN STARK-MILLER

Extending his executive order from the beginning of the coronavirus pandemic, Cuomo reduced the number of signatures candidates need to collect for the March 23 election by 30 percent — from 450 to 315. And while the five remaining candidates in the special election race to replace Andrew Cohen are happy with the change, they also don’t feel it goes far enough.

Why? Legal challenges threatening the validity of many signatures, for one, requiring candidates to collect three or four times that amount just to ensure they won’t be knocked off the ballot through technicalities.

Still, four of the five remaining candidates fanned out across the district this week petitioning. They have to collect these signatures even as coronavirus infection rates continue to rise in the city and parts of the district — especially in Wakefield and Woodlawn. The ZIP code containing those two neighborhoods has a positivity rate of almost 12 percent, according to published reports.

Cuomo’s move over the weekend was different from what he did last summer for the state’s primary races. There, candidates were required to only collect 30 percent of what they normally would, not have their total reduced by 30 percent.

All of the candidates have called for either reducing the signature threshold or waiving the requirement altogether while the pandemic rages on.

One of those candidates, Mino Lora, isn’t even out petitioning because she tested positive for the coronavirus last week. Lora has volunteers out petitioning in her stead, so she can still appear on the March 23 ballot. Yet she told The Riverdale Press that making candidates petition during a pandemic is irresponsible.

“The governor reduced the number of signatures needed for the special election after most of us have already met the original threshold,” Lora said, in a statement. “Temporarily ending petitioning would’ve been safer, and I hope he’ll do so ahead of February when petitioning is expected to begin for the primary election in June.”

Another candidate who called for waiving the signature requirement, Dan Padernacht, said Cuomo’s move is a good start.

“While we hoped for a greater reduction,” he said, “this is a step in the right direction.”

Some of the remaining candidates — Jessica Haller, Eric Dinowitz and Carlton Berkley — said they have to keep petitioning despite COVID-19 dangers because they feel the council district needs representation sooner rather than later.

“We have to go do what we need to do,” Haller said. “And we can’t change the system until we’re part of the system at this point.”

Whether it’s going door-to-door or standing on a street corner, collecting John Hancocks with a deadly virus around is challenging — but the candidates say they’re taking the necessary precautions. Padernacht and his volunteers are wearing gloves, he said, and giving pens to voters after they sign. If the voters don’t want the pens, they separate the used ones and sanitize them later before handing them out again.

He’s collecting signatures on street corners, but he’s also going door-to-door at private homes and in apartment buildings. His campaign is being especially careful in buildings, Padernacht said, by standing back from doors after knocking to maintain social distance.

“And then if they’re willing to sign, that’s when we’ll get a little bit closer and hand them the clipboard,” Padernacht said. “We’ll witness their signature and then we’ll take the clipboard back.”

Haller has taken safety measures a step further. Her campaign has purchased enough pens, so no two voters have to use the same one, she said, and ensures her volunteers fill out a COVID-19 safety form. Additionally, her campaign isn’t collecting signatures in apartment buildings and is staying out of Wakefield and Woodlawn.

Berkley can’t make the same geographic decision on where to collect. He lives in Wakefield and is out petitioning in those neighborhoods — on the street and in apartment buildings.

Dinowitz has taken a different approach, campaigning in all of the district’s neighborhoods while staying completely outdoors. That includes Wakefield and Woodlawn.

While the dangers of petitioning during a pandemic are clear, Haller believes there is more to Martin and Sierra dropping out. It’s financially strenuous to run a special election and primary back-to-back, Haller said, and she knows: She’s personally feeling squeezed financially because she qualified for full matching funds from the city in August and was expecting $168,000 in December.

However, the city’s campaign finance board hasn’t yet allowed the candidates to tap into that cash during the special election.

“So, none of us in District 11 are getting any matching (funds) until, at this point, the end of February,” Haller said. “That could have something to do with it. I mean, like that’s a huge cash flow burden.”

Haller will petition for the primary when that starts next month, but she may not run in June if she loses the special election. On the other hand, Padernacht, Dinowitz and Berkley all plan to make another run for the seat in June, even if they lose in March.

Dinowitz — who has the resources of the Benjamin Franklin Reform Democratic Club, run primarily by his father, Assemblyman Jeffrey Dinowitz, at his disposal — has already surpassed the original threshold of 450 signatures last week and is confident about his chances in March.

“I think my years of service making sure that our corner of the Bronx has a voice that is heard will speak to voters.” Dinowitz said, “And I think I’ll do very well in March.”

Wilson dedicated to looking out for the ‘little guy’