City hit with COVID, violent crime — but not 5-0 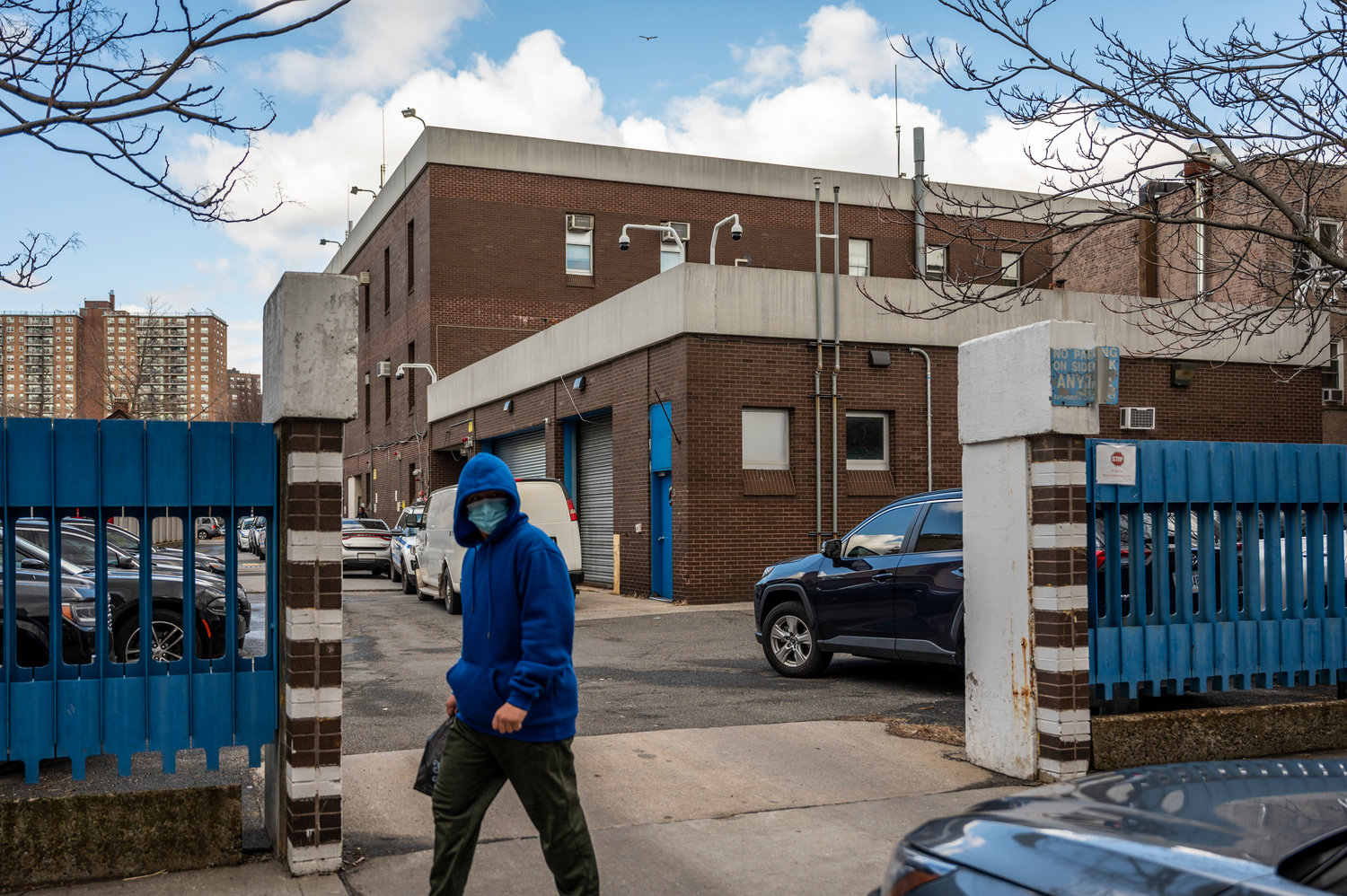 Violent crime like shootings and murders drastically increased in New York City last year. However, upticks within the boundaries of the 50th Precinct was more along the lines of non-violent crimes like burglaries and car thefts.
HIRAM ALEJANDRO DURÃN 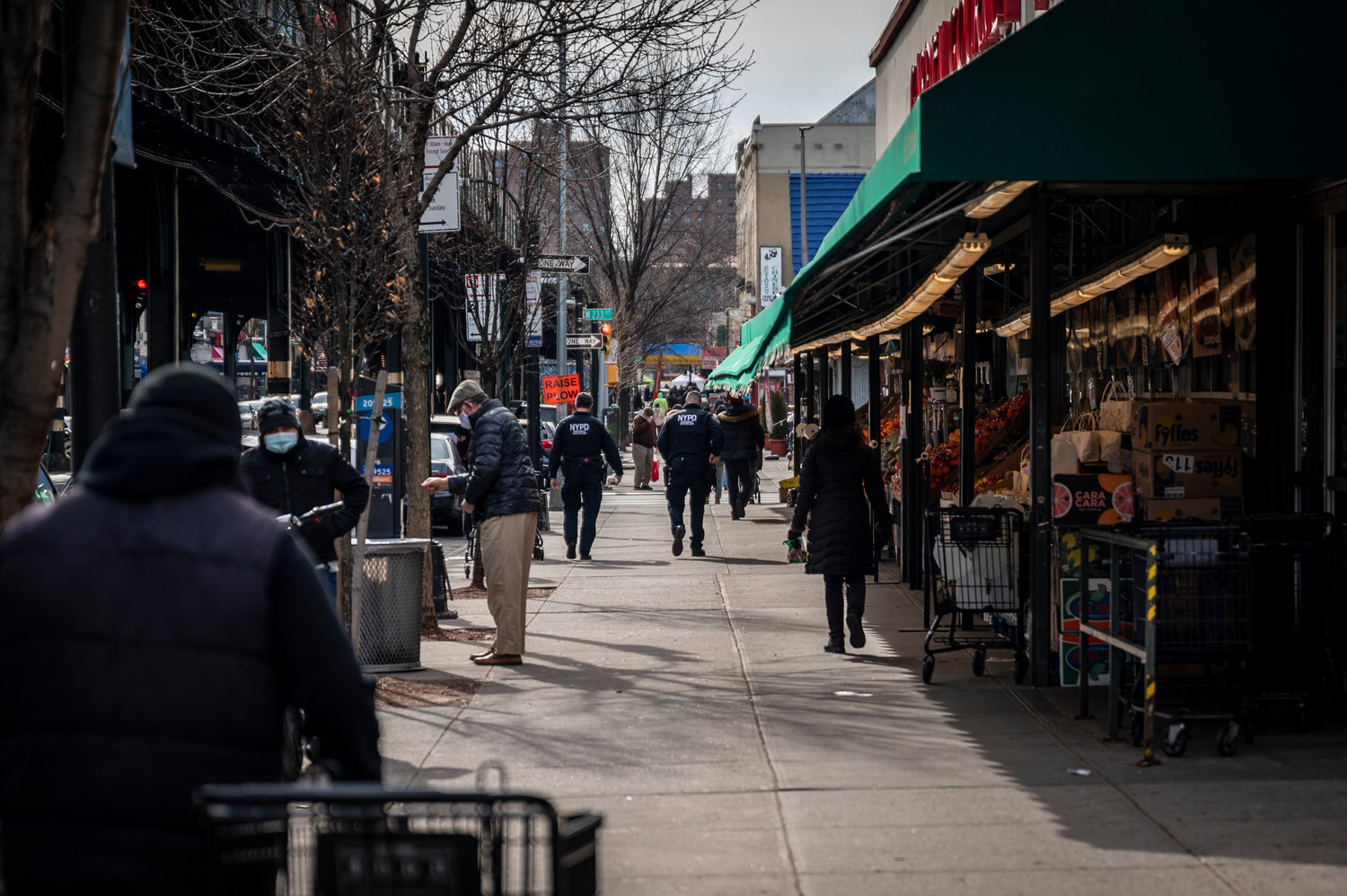 The New York Police Department was hit hard by COVID-19 in 2020, with several thousand officers contracting the virus and dozens succumbing it. The 50th Precinct was hit hard too, says Capt. Emilio Melendez, with some 50 officers testing positive for the coronavirus over the course of the year.
HIRAM ALEJANDRO DURÃN 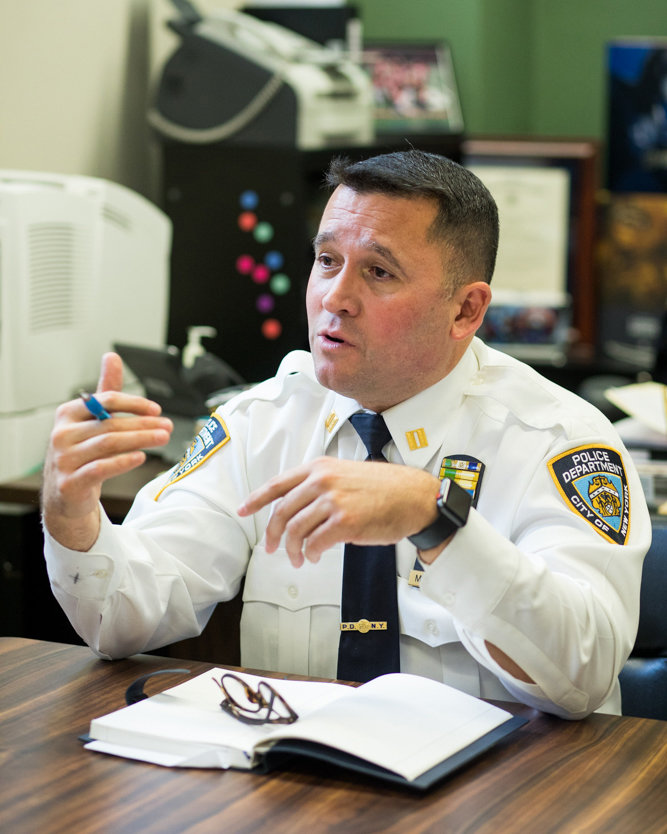 There was less violent crime like robberies in the 50th Precinct last year, but there were more non-violent crimes like burglaries and car thefts. Capt. Emilio Melendez says the precinct is going to focus on collecting more community feedback in an attempt to better address quality of life issues in the coming year.
JULIUS CONSTANTINE MOTAL/ File
Previous Next
By ETHAN STARK-MILLER

The rise in violent crime across the city last year reminded some of New York’s darker times in the 1970s and ‘80s.

Shootings and murders were up across the five boroughs compared to recent years, according to statistics compiled by the New York Police Department, all while the coronavirus ravaged the dense metropolis — infecting thousands of officers, to join the even larger numbers in the communities they were tasked to protect.

The year also saw a national reckoning with police violence toward Black and other minority communities, which came to a head in June with the death of George Floyd at the hands of law enforcement that led to months of protests calling for, among other things, to defund the NYPD.

And that’s exactly what the city council did, shifting $1 billion away from the police’s $6 billion operating budget — partially to promote reform, but also because the city coffers already were overtaxed thanks to the pandemic.

Shootings nearly doubled in New York City last year to more than four a day, while the 462 reported murders were 44 percent more from 2020. There also was an uptick in non-violent crimes, including rates of one burglary every two hours, and nearly a dozen car thefts every day.

Yet, the nearly 6 percent statistical crime surge in the 50th Precinct came more by way of the non-violent variety. Still, there were three murders in the community last year, up from one in 2019. But precinct commander described those murders spread out over 12 months more as isolated incidents, not representing a broader trend. Like a child reportedly dying because their parents neglected to vaccinate them. Or a confrontation in the work place gone wrong. Or simply because of drugs.

“Nobody on the street is just getting killed without a reason,” Melendez said. “Thank God for that.

“We don’t experience the same violence that our next-door neighbors experience.”

That’s reflected in the numbers. Violent crimes dropped nearly 4 percent in the 5-0 — Not a significant fall, Melendez admits, but those numbers already were very low.

There also were just 88 robberies last year compared to 109 in 2019, something Melendez proudly declared as the lowest ever in this command.

“And I do mean it,” the captain said. “Ever since we’ve been tracking robberies, back 20-plus years ago.”

Robberies require a person-to-person interaction, so that could be a little silver lining from the pandemic as fewer people were out and about at different times of the year, Melendez said. On the flip side, non-violent crime followed citywide trends where burglaries were up nearly 45 percent from 2019.

Melendez blames burglaries, at least in part, on the state legislature’s move to eliminate cash bail for most non-violent crimes, which took effect a year ago. The idea for the law was so that those who couldn’t afford to bail out weren’t left in jail until trial. But Melendez says that also means returning people already accused of crimes to the streets where they could possibly commit more.

“One of the things that we saw in the beginning of the year during the bail reform and criminal reform, was that a lot of crimes that would keep people in jail, (that would) qualify them for the bail — well, it wasn’t there anymore,” Melendez said. “Those crimes mainly pertain to non-violent crimes, and that’s where we saw the largest increase.”

Assemblyman Jeffrey Dinowitz, who supported the bail reforms in 2019, isn’t dissuaded by crime statistics today. In fact, as far as he’s concerned, it’s still too early to tell if bail reform and crime upticks are connected.

Dinowitz isn’t afraid to put some of the blame on the pandemic itself, although initial crime growth occurred before anyone was talking about the coronavirus. Still, the Assemblyman says lawmakers should wait until infection rates are under control before making any judgments.

Ed Green, chair of Community Board 8’s public safety committee, agrees that patience is needed. Still, he’s concerned about the rise in burglaries because even though they’re not inherently violent crimes, they have the potential to become violent.

“If somebody comes home or a burglar intrudes on somebody who’s home,” Green said, “that person is going to many times look at it like they’re going to be in a fight for their life.”

Yet Melendez does point out the majority of the precinct’s burglaries took place in trucks, storage sheds and garages — not homes.

Out on the streets, another area experiencing higher crime rates came in the form of car thefts, Melendez said. While this might be another statistic that’s easy to blame on bail reform, the captain admits many thieves can now hack electronic key fobs, making it easier to break into and steal a vehicle.

But like so many others in the city, crime wasn’t the only thing officers were fighting. COVID-19 afflicted thousands of officers across the NYPD, ultimately claiming the lives of several dozen. Some 50 officers under Melendez’s command tested positive over the course of the year.

“My manning was depleted because of how many were going out sick,” Melendez said. “Once we figured out social distancing. wearing the mask, and obviously washing your hands, that definitely helped.”

One statistic that doesn’t typically show up in crime reports are quality of life issues, Melendez said. Still, the captain plans to continue addressing noise, drag racing, blocked driveways and large gatherings as 2021 lumbers on.

“We want to know how we can do things better,” Melendez said. “And the only way we’re going to know what that is if we get feedback from the community.”