City steps carefully as Bronx fights to catch up 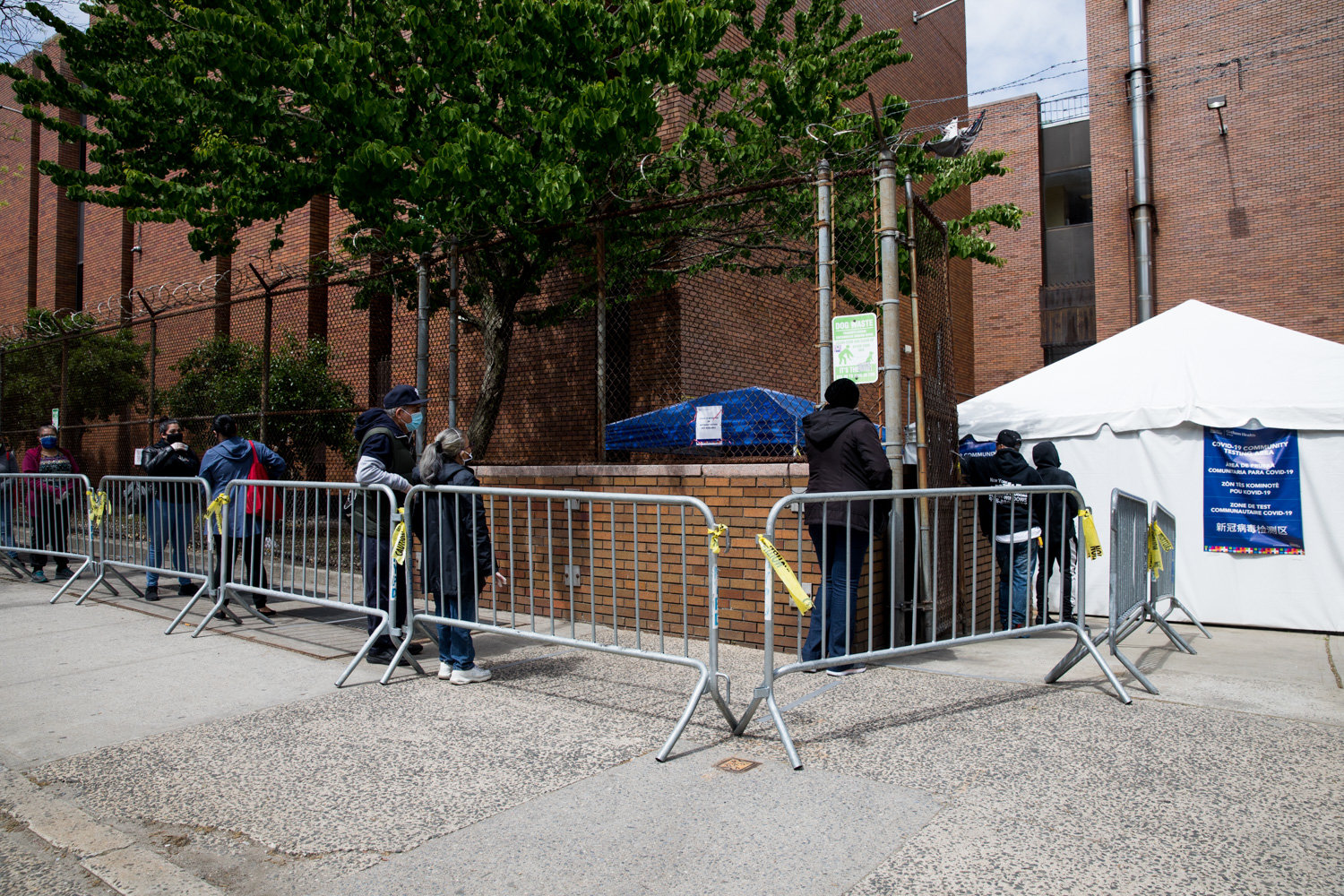 People wait in line to get tested for the coronavirus that causes COVID-19 at NYC Health + Hospitals/Gotham Health, Belvis — which is one of six diagnostic testing centers in the borough.
JULIUS CONSTANTINE MOTAL 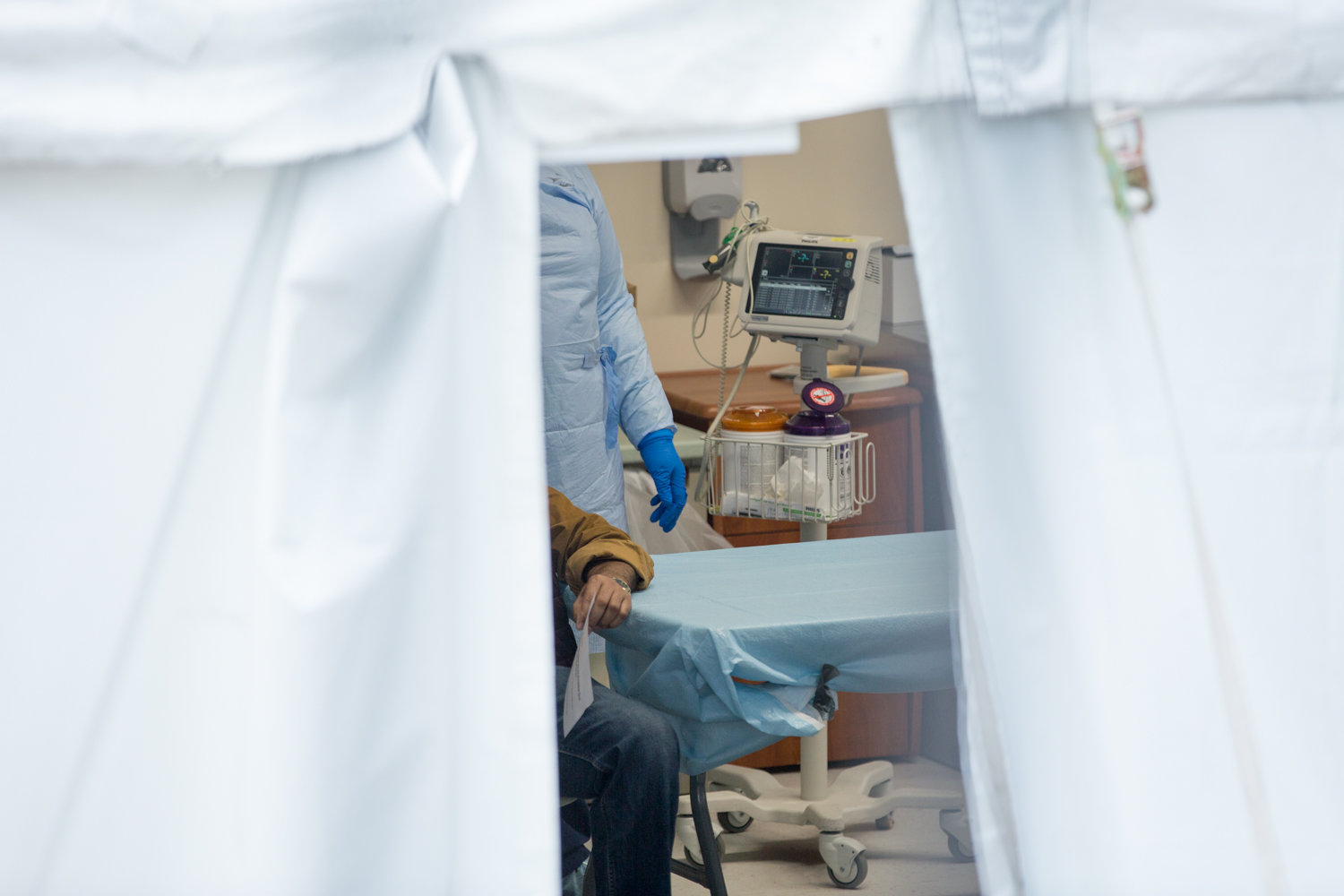 Lincoln Hospital is one of six diagnostic testing sites in the Bronx for the coronavirus that causes COVID-19. Testing capacity at hospitals citywide is 26 percent below where it should be, according to the mayor’s office.
JULIUS CONSTANTINE MOTAL 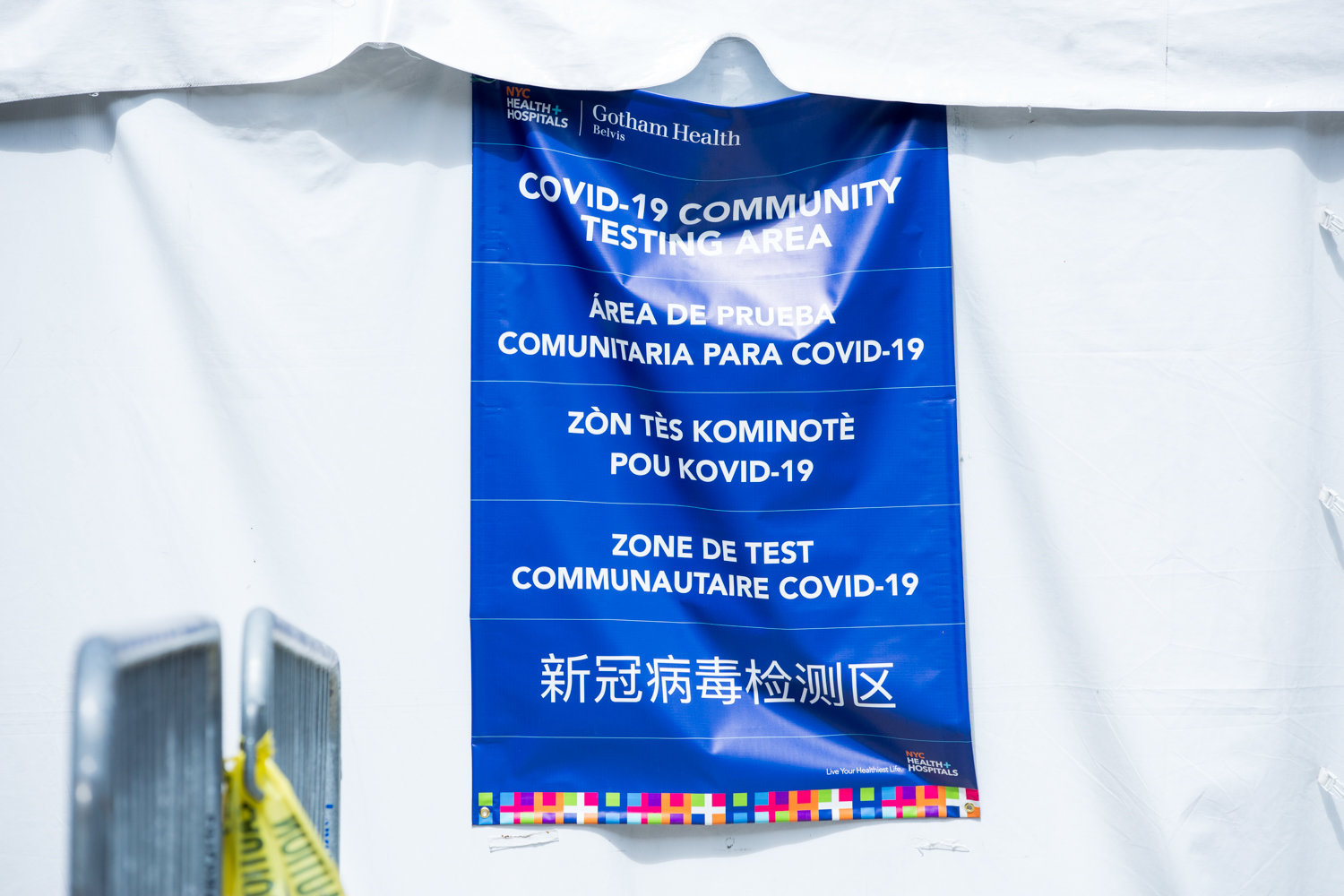 A sign on a tent informs people that NYC Health + Hospitals/Gotham Health, Belvis, is a diagnostic testing area for the coronavirus that causes COVID-19 — one of six testing centers in the borough.
JULIUS CONSTANTINE MOTAL 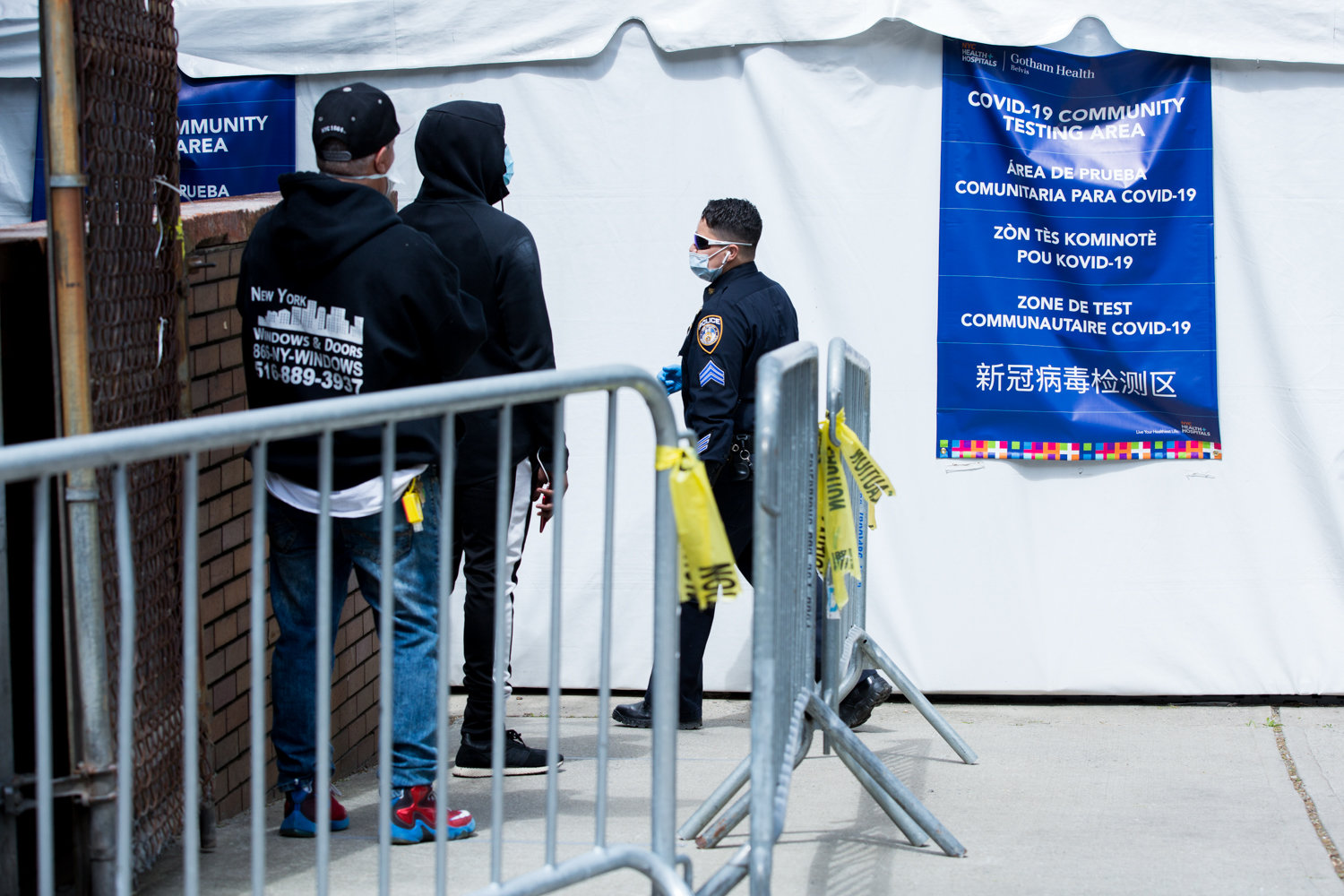 Testing for the coronavirus that causes COVID-19 is available at six centers in the borough, including NYC Health + Hospitals/Gotham Health, Belvis.
JULIUS CONSTANTINE MOTAL 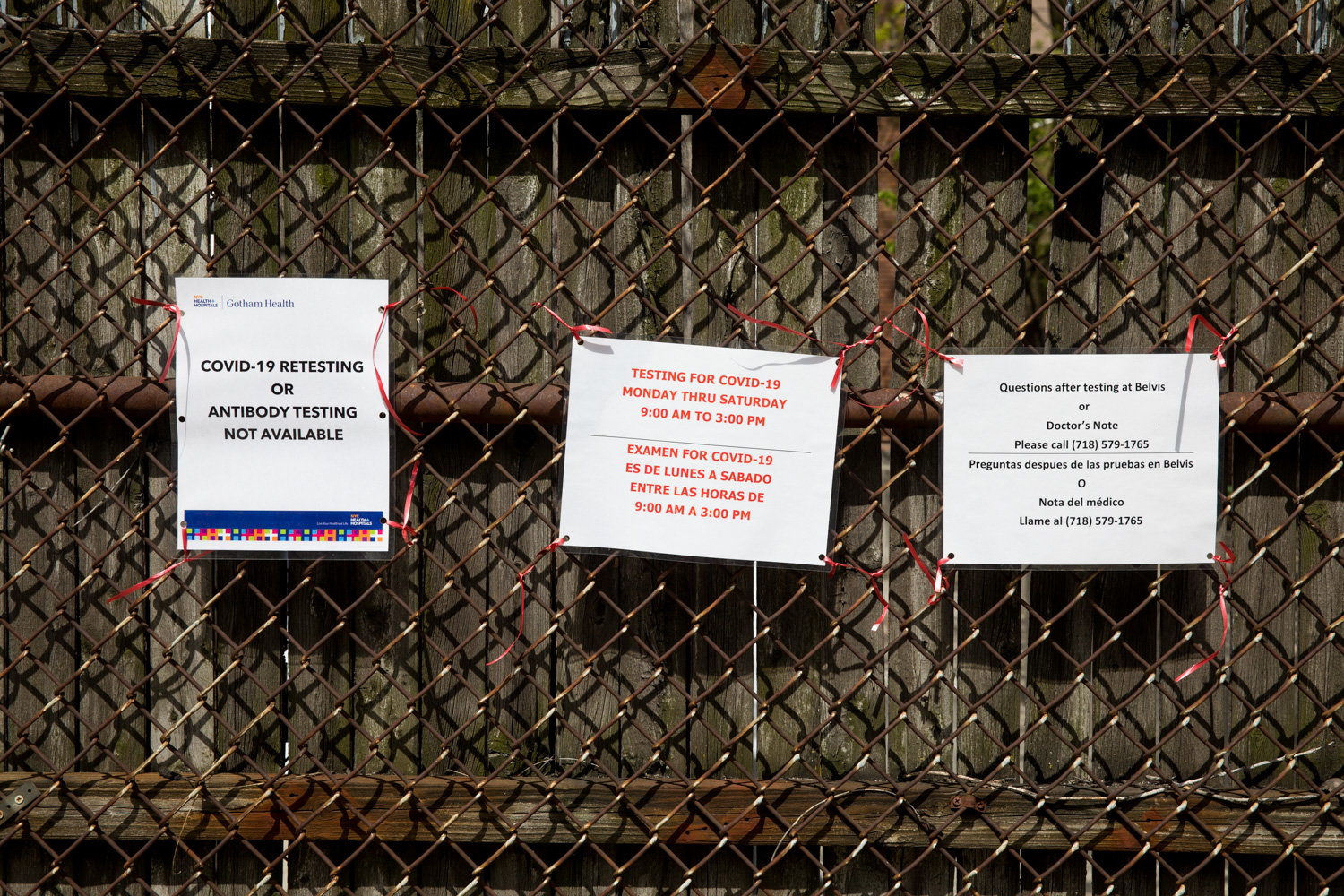 Signs posted outside of NYC Health + Hospitals/Gotham Health, Belvis, clarify hours of operation and what kinds of diagnostic tests are available for the coronavirus that causes COVID-19.
JULIUS CONSTANTINE MOTAL
Previous Next
By ANTHONY CAPOTE

Upstate New York is enjoying what Gov. Andrew Cuomo calls the first phase of an extended statewide stay-at-home order — one that continues full force downstate until at least June 13.

But New York City — and the Bronx, in particular — might not have to wait that long if it can meet the criteria of seven different metrics established by the state health department, including a 14-day decline in total hospitalizations and deaths, having at least 30 percent of hospital and intensive care unit beds available, and a sophisticated testing and contact tracing apparatus deployed.

The testing and tracing mechanism is among the most important for regions in New York to hit in the city, not least because the more people the city can test in a day, the better overall picture officials will have on the sick or those who could potentially become sick in the coming weeks.

Regions looking to start reopening must have at least 30 available tests and 30 contact tracers per 1,000 residents. For a city of roughly 8.5 million people, that translates to somewhere in the ballpark of 250,000 available tests and the same number of contact tracers per month. As of May 15, more than 17,500 people were tested for SARS-CoV-2 in New York City across 23 city-run testing sites and various hospitals administering tests.

By May 18, the number of city-run testing sites had expanded to 29, of which nine are in Manhattan, eight in Brooklyn, six in the Bronx, four in Queens and just two in Staten Island. The Bronx, however, still has one of the highest infection rates in the state.

An analysis of COVID-19 data by the city’s health department revealed that of the top 10 most impacted ZIP codes in the city, five were in the Bronx. But that’s not even the most concerning news: The Riverdale-Kingsbridge area ranked ninth on that list, with an infection rate of 3,577 per 100,000 residents.

The high infection rates in the Bronx — particularly in working class communities — have been a huge point of contention at both the state and city levels, with many in the borough feeling left out of the COVID-19 response and recovery processes.

State Sen. Gustavo Rivera voiced his concerns at a virtual hearing May 18, pushing for his fellow Albany lawmakers to address the impact the coronavirus has had on working class neighborhoods and communities of color.

For Rivera, the high infection rate in the Bronx in particular is a result of some glaring discrepancies in citywide access to testing. This has largely been the result of failures at the federal, state and city level to account for the needs of people living in his district, the senator said. One example he cites was early testing facilities in the Bronx were drive-thru only.

“Seventy percent of my constituents don’t even own a vehicle, so how are they going to get tested?” Rivera asked.

And that doesn’t even begin to cover the pre-existing issues involving racial and economic inequality in the Bronx that also may have contributed to the outsized impact of the coronavirus in the borough.

“I do know the rate of infection was very high and the number of deaths of was higher than in other places,” Rivera said. “That is certainly true because there have been health care disparities in the Bronx before all of this.”

The senator went on to criticize Cuomo’s response to those inequalities after a reporter mentioned the health care access gap in the Bronx at a briefing last week.

“Have you ever heard of the phrase ‘Columbusing’?” Rivera asked, referring to the internet meme by the same name, which describes the act of discovering something that is not new. “Well that’s how the governor reacted when someone asked him about racial disparities in the Bronx. He just was like, ‘Wow, we have to look into that.’”

Over the next week, city officials aim to increase the number of available daily tests to 20,000, which Mayor Bill de Blasio seems certain the city can achieve by May 25. City Hall, however, couldn’t share granular data on how many tests had been administered in the Bronx specifically.

It seems, for now, city residents — especially in the Bronx, will remain in limbo until June 13, or until if and when the region meets the state’s seven metrics.

On that front, Mayor Bill de Blasio seemed optimistic in one of his daily coronavirus briefings last week, saying the city’s numbers continue to improve, especially when it comes to new hospitalizations for those suffering from severe COVID-19 complications.

“That’s 800 fewer people per day being admitted compared to the end of March,” de Blasio said during his May 15 briefing. “That’s just breathtaking.”