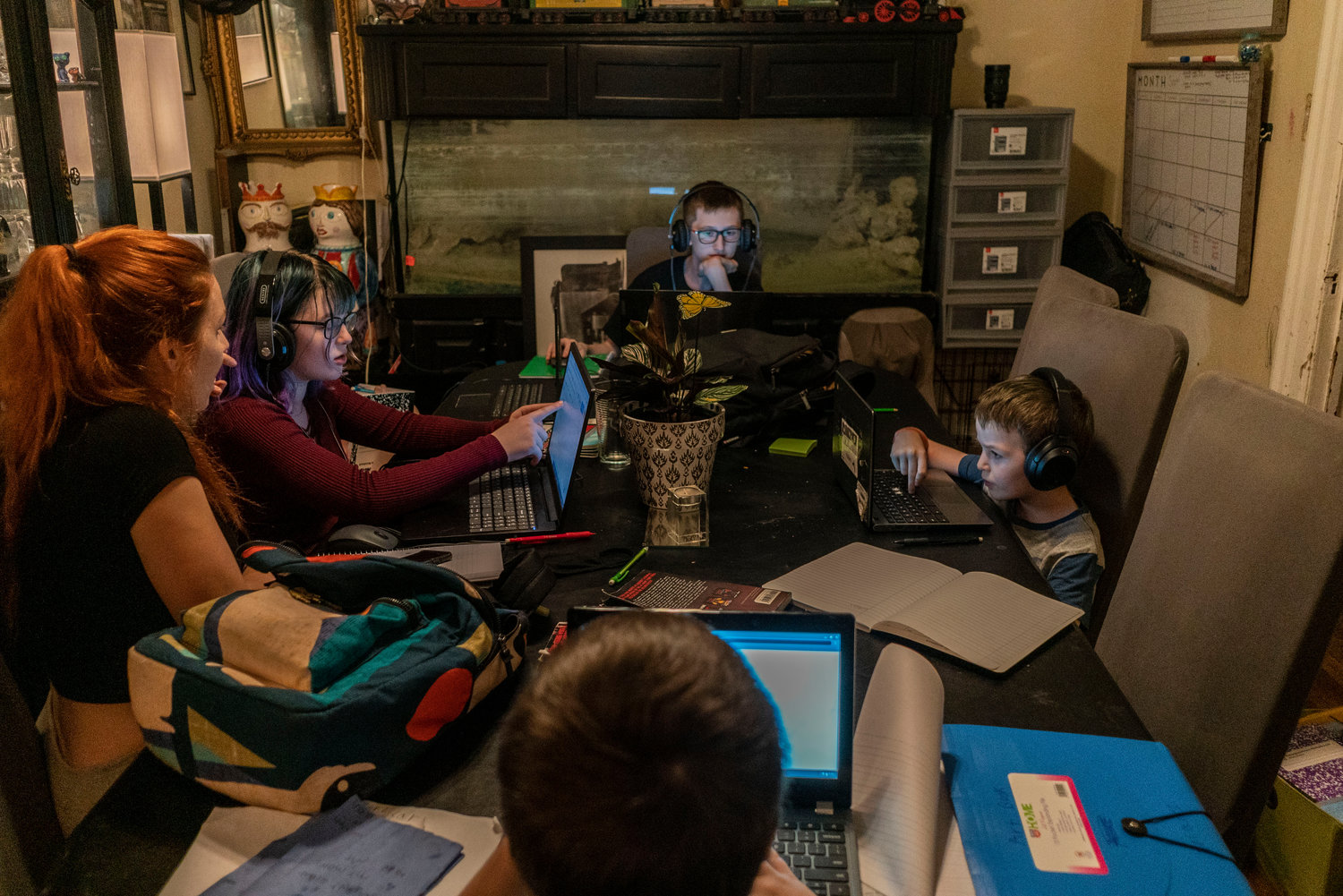 Doing school work in the dining room each night is a family affair for the Lynches since the start of remote learning, including, from left, mom Joelle, along with Bailee, 13; Nicolas Jr., 14; Carter, 8; and Nolan-Louis, 9.
HIRAM ALEJANDRO DURÁN 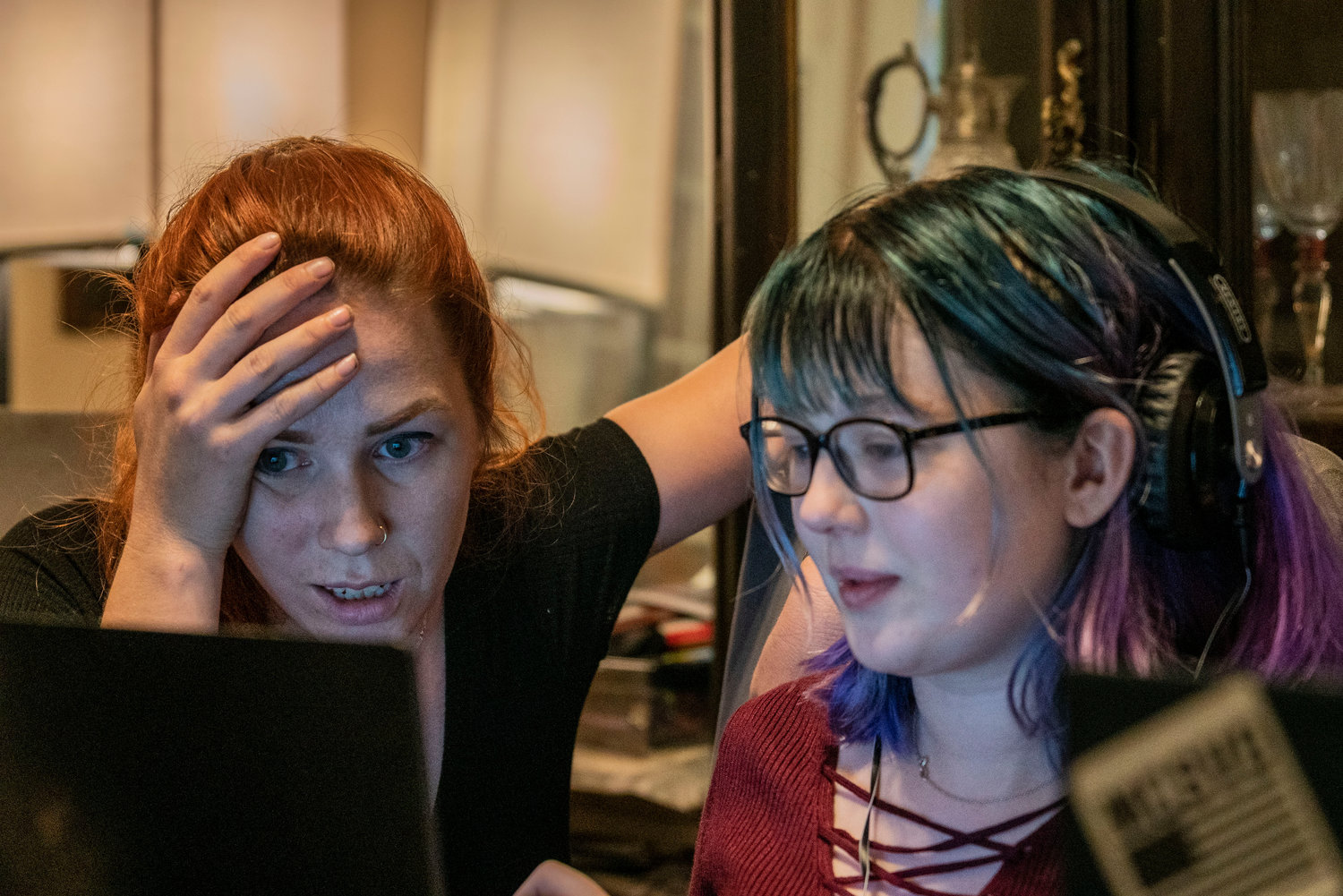 Joelle Lynch is puzzled by an algebra question posed by daughter Bailee during a home-based assignment. This has become a norm for families like the Lynches, struggling to adjust to remote learning.
HIRAM ALEJANDRO DURÁN 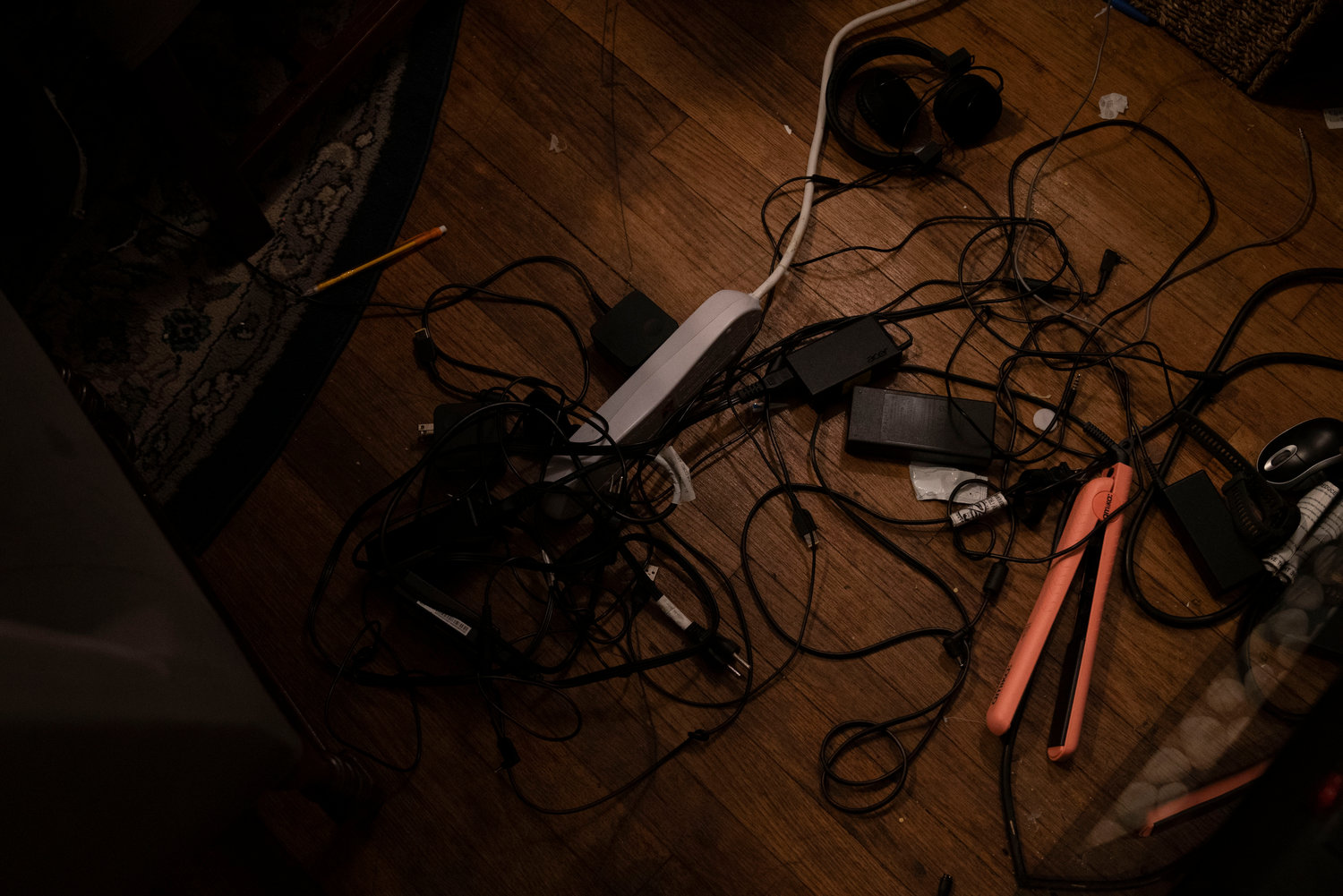 The weight of the world is on this extension cord’s shoulders. It’s responsible for charging all five of the Lynch children’s laptops while they continue remote learning.
HIRAM ALEJANDRO DURÁN 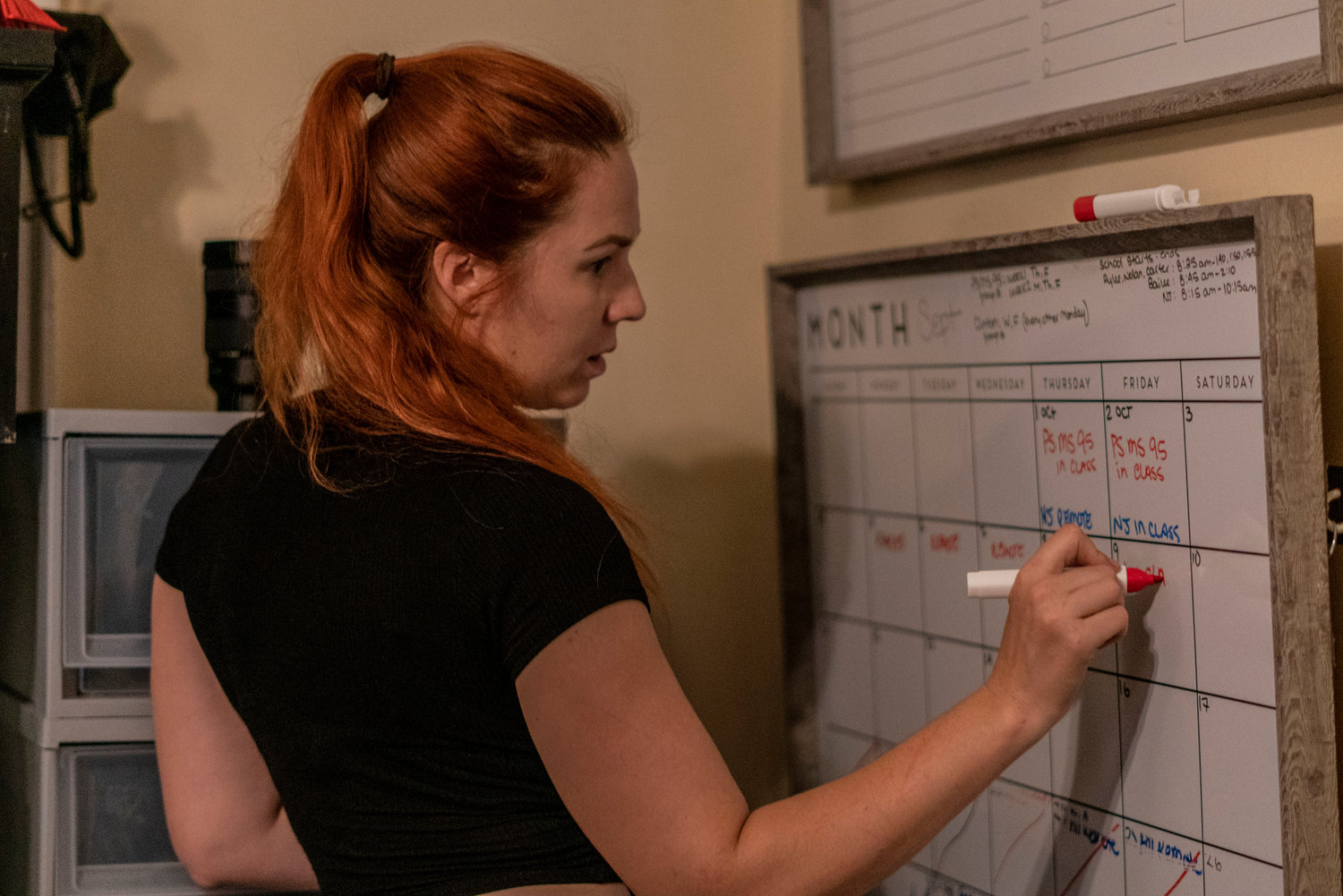 Joelle Lynch writes down a calendar for October. Her large family opted for hybrid learning, but she needs to keep track of who is learning what remotely, and on which day.
HIRAM ALEJANDRO DURÁN 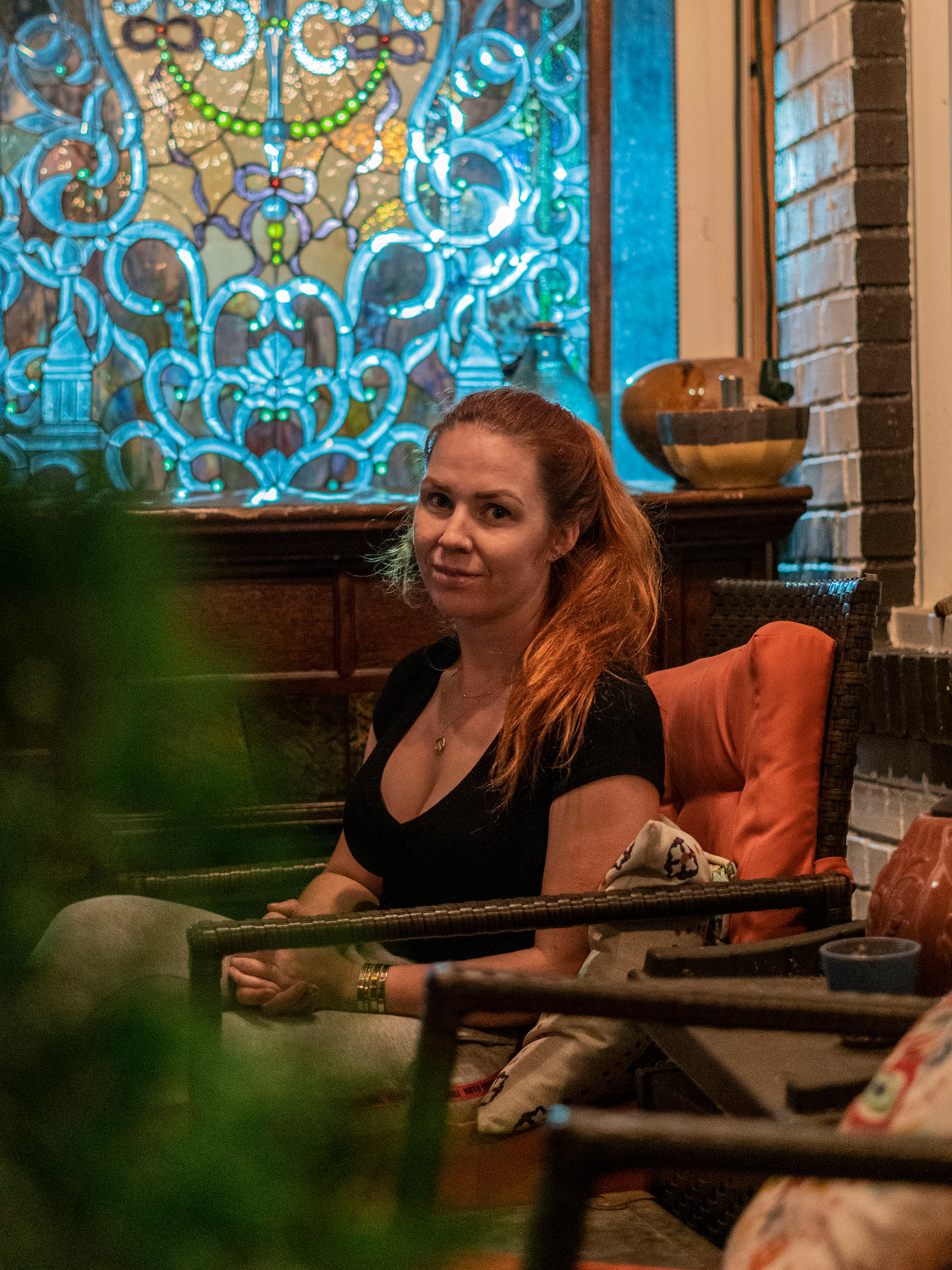 Joelle Lynch and her five children have been frustrated by remote learning since orientation last month. Technical difficulties and lack of communication from the city’s education department are posing a unique and challenging return to school for them and for other families across the city.
HIRAM ALEJANDRO DURÁN
Previous Next

This unorthodox and frustrating start to the academic year was due to Mayor Bill de Blasio once again delaying in-person classes just a few days before they were set to start.”
By ROSE BRENNAN

Remote learning at Joelle Lynch’s home is nothing short of a logistical nightmare.

Her five children — all public school students — sit around a table at the family home, each in their respective “classes,” but nevertheless just inches from their siblings trying to learn their own material.

The usual distractions present themselves daily. The family dog sometimes makes guest appearances during remote sessions, drawing the attention of the younger children. The internet stream can buckle under the pressure of five people using it at once, inevitably causing it to stop working for one or more of them. And sometimes the online videoconferencing app is down completely, making it all but impossible to get to class.

This unorthodox and frustrating start to the academic year was due to Mayor Bill de Blasio once again delaying in-person classes just a few days before they were set to start. The city instead opted for a “phased-in” reopening, and only students in pre-kindergarten and specialized District 75 schools returned to in-person classes as planned Sept. 21.

Meanwhile, elementary and K-8 schools began in-person classes Sept. 29 — even as coronavirus cases start to spike again in the city — while middle and high schools were expected to begin theirs Oct. 1.

While it may be exhausting for public school parents, students, teachers and administrators, this isn’t their first rodeo when it comes to school reopening delays. Public schools were originally slated to reopen for at least some in-person classes Sept. 10, but that date was pushed back after de Blasio finalized a new agreement with the United Federation of Teachers — the city’s public school teachers’ union.

All things considered, the remote start has been particularly challenging for Lynch’s family, whether from a parent or student perspective.

“We haven’t even completed a full week, and we’re already over it,” Joelle Lynch said. “I’m so frustrated with the process and how little the DOE has communicated how this is going to work.”

Two of Lynch’s children are beginning major schooling chapters in their lives this academic year. One is entering kindergarten at P.S. 95 Sheila Mencher, and the other is entering his freshman year at DeWitt Clinton High School. In an ideal world, of course, Lynch would want them to experience those milestones in a classroom.

But parents aren’t alone in the struggle to find out what’s going on. Michael Flanagan, a social studies teacher at Riverdale/Kingsbridge Academy, says there’s been some difficulties in communication between the education department and the boots on the ground in the schools. He didn’t find out about the latest delayed reopening from the education department, nor from the union or even from his principal. It was his students who told him, during a remote orientation session.

Flanagan’s experience echoes those of other teachers and principals throughout the city. Many say they learned about the delay from de Blasio’s Sept. 17 news conference, or even from education reporters on Twitter, rather than from the education department itself.

Flanagan is also RKA’s union representative, which gives him a unique perspective on the in-person reopening struggle. In a piece he wrote for an online blog, Flanagan likens hybrid learning to building a house, where de Blasio is the architect, schools chancellor Richard Carranza is the engineer, UFT president Michael Mulgrew is the general contractor, and principals and teachers are project managers and laborers, respectively.

But there are two problems with building the house, Flanagan wrote. First, de Blasio, Carranza and Mulgrew have never built one before. Second, they’re not taking advice from people pointing out their mistakes. And then, before the house is close to being finished, the laborers are told to bring in the tenants — public school students.

“No one is listening to the laborers,” Flanagan wrote. “The foundation of the house is weak, the support beams are clearly not secure, and the shingles are going to come crashing down, causing injury and possibly death. Listen to the laborers: The house is not safe.”

Kevin Slavin isn’t taking any chances sending his daughter into this proverbial house. His daughter started kindergarten at P.S. 81 Robert J. Christen this year, but did so fully remotely. And his family made that decision long before they were even asked to, when the coronavirus pandemic was really starting to become news.

“It has been obvious to me, since more or less January or February, what was going to happen here,” Slavin said. “It is also obvious to me that the schools will close, and that this is a rather expensive and odious exercise in trying to keep them open.”

But just because he’s avoiding the turmoil surrounding in-person classes doesn’t mean it’s been an easy road for Slavin. Because kindergarten registration had to take place online this year, many children throughout the city were improperly registered or had gotten completely lost in the education department’s system.

Although Lynch and Slavin opted for different instructional styles for their children this academic year, both of their kindergartners got lost in the system and were not registered correctly.

While Slavin thinks schools closing again is inevitable, he doesn’t think it’s the fault of the individual schools, or their teachers and administrators. Rather, there were systemic failures to address key issues in reopening. To him, the city was understandably unprepared for the coronavirus’ impact in March, but that’s not an excuse six months down the line.