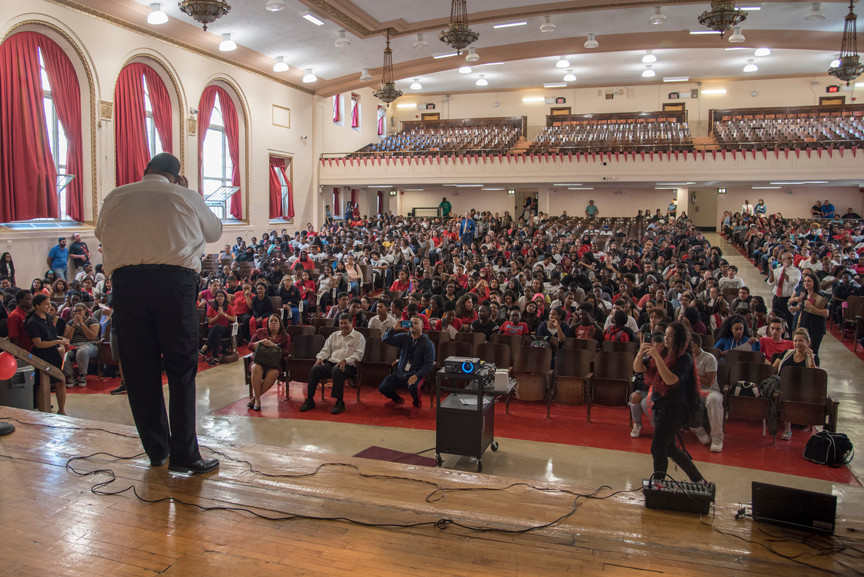 DeWitt Clinton's Principal Santiago 'Santi' Tavares addresses students in the auditorium during the "I Commit to Graduate" event at the high school on Friday, Sept. 23.
David "Dee" Delgado
By Lisa Herndon

Students cheered and waved crimson flags of DeWitt Clinton High School in support of their classmates who walked on the auditorium stage to tell why they are committed to graduating, at a school where less than half of students do so.

“I commit to graduate because I can’t get anywhere in life without a diploma,” said one.

“I commit to graduate because I want to have a future and make my family proud,” stated another.

“I commit to graduate because I want to make some money,” added a third.

It was the last portion in the school’s nearly daylong “I commit to graduate because…” event, during which students at each grade level learned what they needed to do for completing high school and enrolling in college. Students signed the school’s banner, listing their reasons for wanting to finish high school, and the banner was displayed along the auditorium stage.

The ceremony was the first in what is intended to become a series of annual events, part of the school’s efforts help boost its low graduation rate. DeWitt Clinton’s four-year graduation rate stood at 46 percent, according to the New York Education Department’s latest figures for the 2014-2015 year. This compares to the overall Bronx rate of 62 percent and the citywide rate of 70 percent.

Among DeWitt Clinton’s ninth-graders, 71 percent earned enough credits to be on track for graduation, compared to 78 percent in the Bronx as a whole and to 84 percent citywide for the 2014-2015 school year.

The commitment to graduation event was intended change the trend by inspiring students and keeping them motivated to work on getting their diplomas.

The Education Department has not released figures yet for 2015-2016. For the current school year, Mr. Taveras said that he expected the graduation rate to be between 55-60 percent.

“I commit to graduate because I want to prove to people that said I couldn’t make it wrong,” said senior Anais Bely. After high school, Anais said, she plans to go to college and major in psychology and theater. She was filming the event as part of the school’s film and photography club.

“This school has helped me grow so much that it’s unbelievable, and I want to capture all of the good stuff on camera and put it out,” she said. One of the things she accomplished in high school was overcoming a fear of public speaking, Anais said, and she credited the school’s Reserve Officer Training Corps, or ROTC, program for this.

“When I came here, I couldn’t stand in front of the crowd and speak,” she said.

“This day has helped me stay motivated,” Dae said. “I always know that there are people who are out there and are still going through the struggle, just as I was and still am.”

During a speech to students, Mr. Taveras recounted his own struggles with school, giving students such as Dae additional motivation to study.

“I have a bunch of family members who haven’t graduated and they look at me as an inspiration, as someone who is going to graduate and going to be something,” Dae said. After high school, he plans to enlist in the Coast Guard, and later in college.

“Staying on task, never giving up… It’s always about putting in that 100 percent,” he said.

The day was “a partnership between DeWitt Clinton High School and Monroe College to inspire young people to graduate with the idea that they can. They can do better in their lives and graduating high school and going to college is the first step,” said Gary Axelbank, director of community relations at Monroe College, who also helped to plan the day. The College has a “Commit to Complete” program, which “I commit to graduate,” was modeled after. Monroe staff and faculty members helped at the event.

DeWitt Clinton is on its last year in the Education Department’s “Renewal Schools” program for struggling schools. The program includes adding an extra hour in the school day and forming partnerships with community-based organizations to provide after-school programming and mental health services.

“We just had a receivership meeting last night. It’s very clear in black and white what the expectations are. We met some of our goals and we didn’t meet some of our goals. Like I tell everybody, ‘This is the time to roll up your sleeves and go for it.’ If we make it, great. If we don’t, we know that we didn’t go down without a hard battle,” Mr. Taveras said at the Sept. 23 event.

“We met our attendance goal,” Mr. Taveras said “We know we met our kids making progress towards graduation, which means getting 10 or more credits in the first, second or third year, and we know that we met that. We still haven’t received that information from the state and the city. And, we know that we didn’t meet our graduation rate.”

“I think that everybody is really working hard towards making our benchmarks,” Mr. Taveras said.