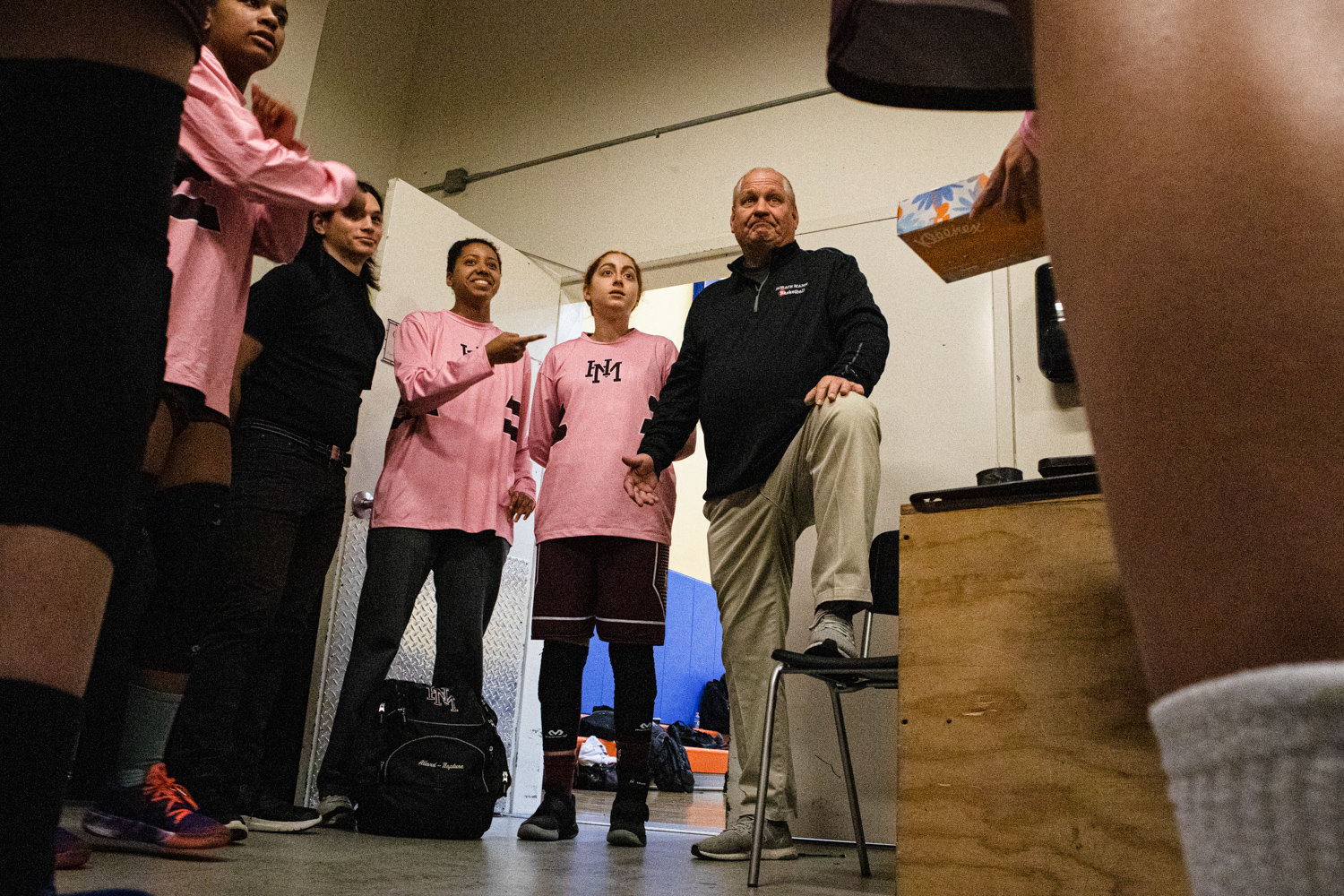 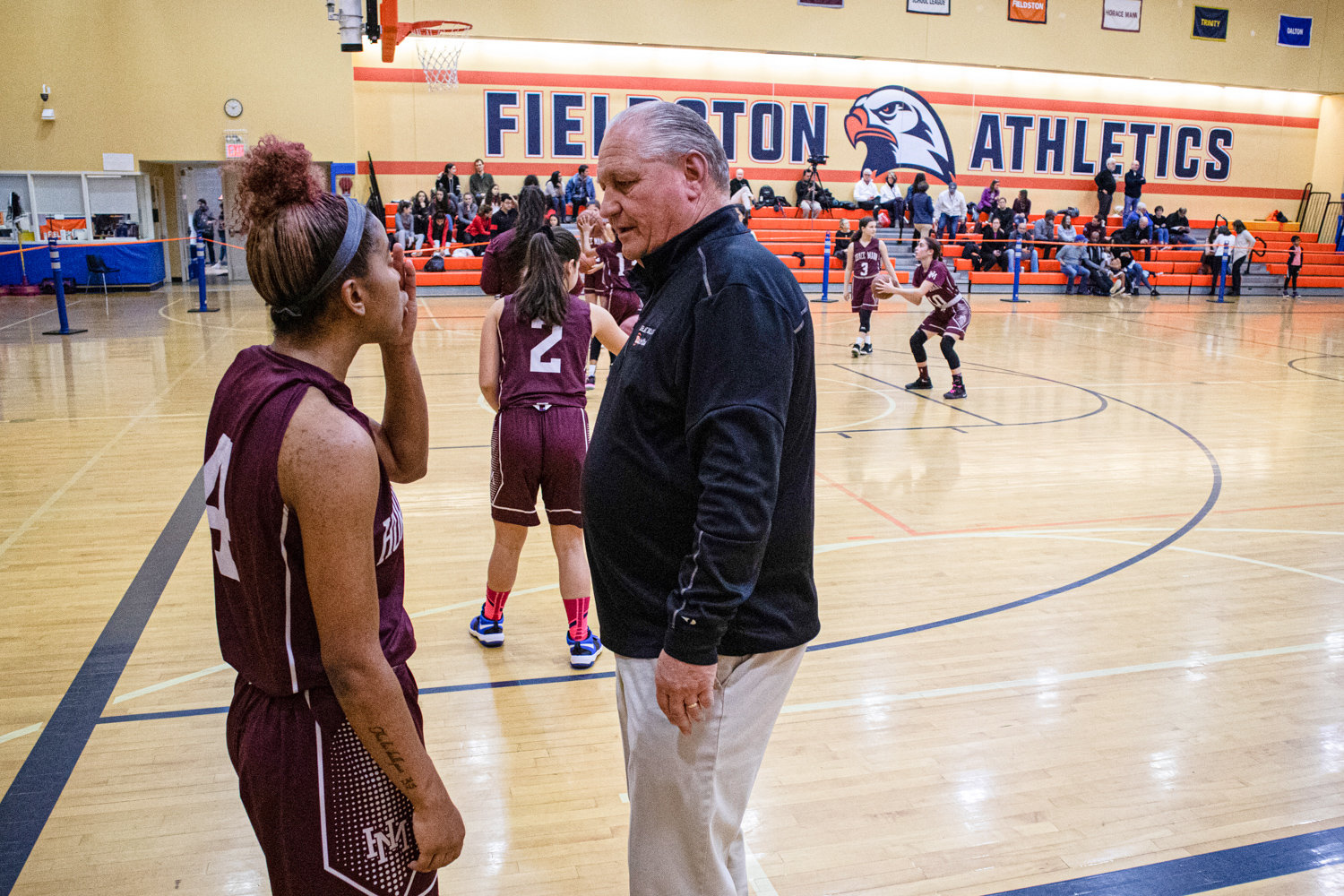 Horace Mann girls basketball coach Ray Barile is in his 21st season running his annual Coaches vs. Cancer Tournament. The event raised $60,000 this past Saturday, and nearly $800,000 since its inception.
HIRAM ALEJANDRO DURÁN
Previous Next
By SEAN BRENNAN

A little over two decades ago, Ray Barile’s life was touched by cancer.

His grandmother, Agnes Barile, was diagnosed with the condition, and Barile — Horace Mann’s girls’ basketball coach — wanted to do something to combat a most formidable foe.

So Barile created a tournament where he could not only showcase the talents of area boys and girls basketball players, but also raise money in the fight against cancer.

“I’ve been doing this for a long time,” Barile said. “This year will be 21 years with the boys, and it’s the 15th year for the girls. When I started this I thought it would be great if I could run a showcase where we have a bunch of games, make up a program, charge admission and raise money doing something that I love to do. I love coaching and I know kids love playing, so it was a way to give back.”

The day began with a boys game at 9:30 a.m., and continued well into the evening with an extensive slate of contests involving both boys and girls. It’s a far cry from its humble beginnings.

“The first tournament was held at Manhattan College with three games,” Barile said. “I remember we raised $2,700 that day. The next year it went to four games, and it just kept expanding.”

That’s when Barile came up with a game plan to grow his pet project.

“I asked (the Ivy League) if they wanted to do it every year with me, and we would play teams from outside our league,” Barile said. “So we have Catholic league teams come in, (Public School Athletic League) teams, public school teams from Westchester and other private schools around the area. It just became a great event, and it took off.”

This year saw 28 teams compete in Barile’s showcase event, which translates to 14 games. That means a long, long day for Barile.

But Barile’s tournament workload is not limited to just the day of the games. There are programs to be printed, teams to be invited, and about a hundred other small details that go along with running an event of this size.

“I pretty much reach out to teams, but a lot of the schools have been here before,” Barile said. “In the Catholic league, Fordham Prep, Xavier and Regis are my mainstays. I make the schedule up sometime around the middle of April, and I rotate the times every year so that if you played late one year, you play early the next. But putting it together is pretty time-consuming.”

But Barile gets great cooperation from competing programs who supply him with all the necessary information he needs in order to publish the tournament’s programs, the real moneymaker of the day.

Prior to this year’s event, Barile’s tournament had raised a little over $730,000 for the American Cancer Society. After last Saturday’s games, he was hoping to breach the $800,000 plateau.

But he got close. A day after the tournament, the coach reported this year’s event took in $60,000: “Our highest total ever.”

That pushes the overall haul to just over $790,000 over the 21-year history of the tournament. Not bad for a basketball showcase with very humble beginnings.

The money raised has been used in a variety of ways to help those stricken by the disease.

“Some of the money goes to research and some goes to family support,” said Barile, now in his 38th season at Horace Mann. “Things like providing transportation to chemo treatments, helping people get caregivers, and helping people who need wigs get them. So all different kinds of services that can help them.”

Despite all the work involved, Barile said his labor of love will continue for as long as he remains at Horace Mann.

“I’m going to do it until I retire,” he said. “I just never thought it would be going on as long as it has.”