Coffee drinkers hope for last-minute reprieve to save Buunni 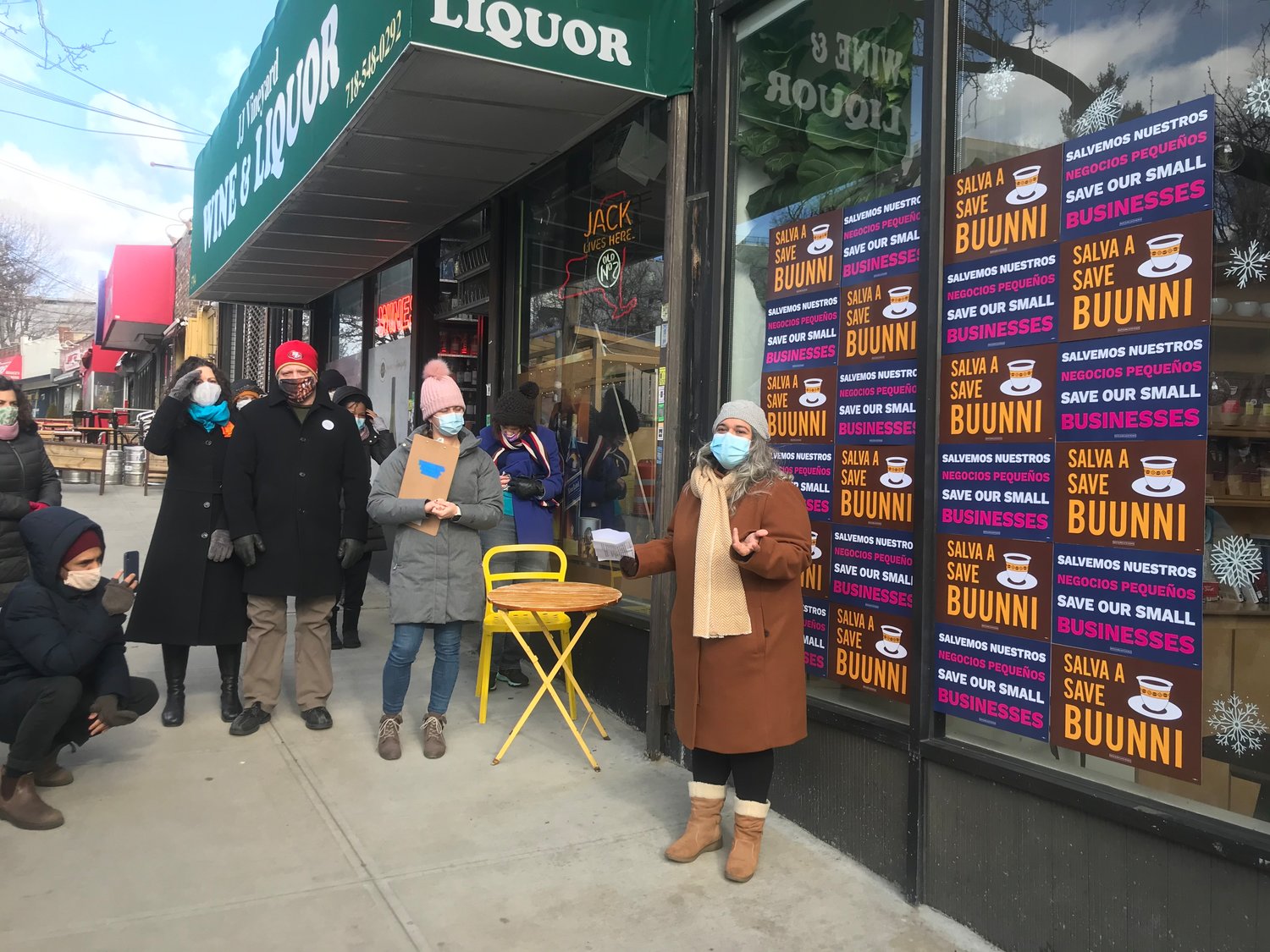 Buunni Coffee co-founder Sarina Prabasi talks to a crowd that rallied outside her 3207 Riverdale Ave., location Saturday afternoon, in the hopes to prevent the shop from closing for good on Sunday.
MICHAEL HINMAN 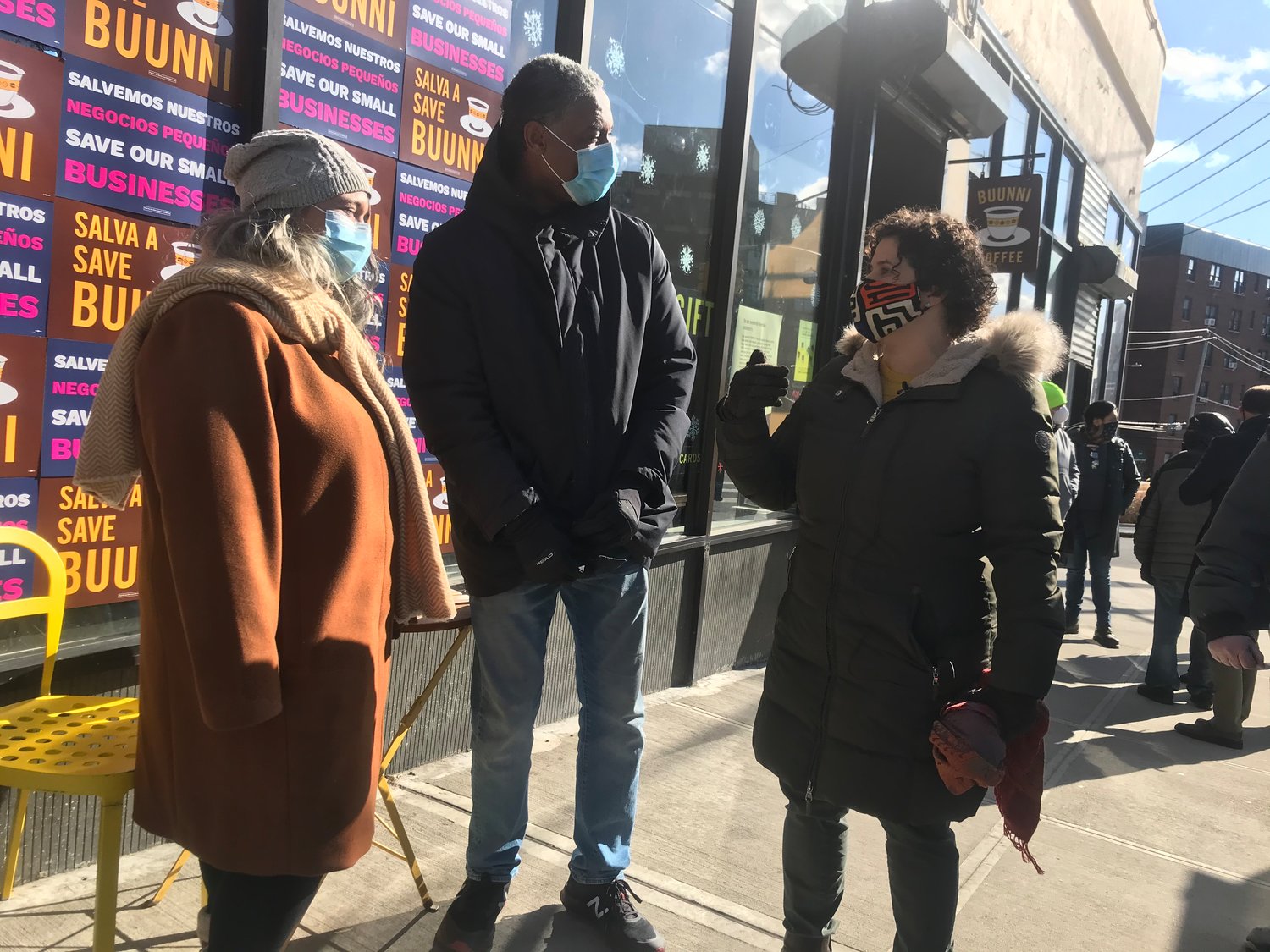 City council candidate Mino Lora talks to Buunni Coffee owners Sarina Prabasi and Elias Gurmu on Saturday after a rally Lora organized to try and save the Riverdale Avenue location of Buunni Coffee. Prabasi and Gurmu will continue to run three other Manhattan locations, but couldn't strike a similar deal with the landlord in Riverdale to keep that location going during the coronavirus pandemic.
MICHAEL HINMAN
Previous Next
By MICHAEL HINMAN

The temperature was a chilly 32 degrees outside of Buunni Coffee, but there was nowhere else Sarina Prabasi wanted to be at that moment.

When the doors finally opened in 2018 at 3702 Riverdale Ave., after months of delay, this location marked the official expansion of an idea to bring hot Ethiopian coffee to the city, which Prabasi started with husband Elias Gurmu in Washington Heights. Since then, the couple has opened two more locations at the George Washington Bridge Bus Terminal, and in Inwood. And as 2020 got underway, life couldn't be better for Prabasi, Gurmu, and their young family.

Then the coronavirus arrived, and that changed everything. Not just for Prabasi, but thousands of businesses across the city — especially in the Bronx. As loyal as customers were, revenue dropped significantly, and paying rent through all the shutdowns became near impossible.

Landlords at Buunni's other three locations found a way to keep things running despite the pandemic. That also happened in Riverdale — but not long enough. An agreement with Pioneer Management to reduce rent expires at the end of the month. And unless the landlord comes through with a new agreement, Buunni will close the doors on its Riverdale location for good on Sunday.

At lunchtime the day before, customers, fellow business owners, elected officials and a few candidates for city council joined Prabasi in front of their threatened store, rallying to keep it open.

Prabasi published a Point of View in The Riverdale Press last week, ready to share the bad news about the location's closing. Yet, just minutes after a Press reporter reached out to the landlord for comment, that same landlord reconnected with Prabasi igniting hope that a deal could be reached.

Nearly a week later, nothing has come of it, she said. And there's little hope left in keeping the location open.

Mino Lora, who is seeking to replace Andrew Cohen during a March 23 city council special election, organized Saturday's rally to support not just her friend, but the kind of small business she says is vital for the community.

"It's an emotional moment when a small business that is immigrant-owned, that is family-owned, that is owned by a team of a husband and a wife — that hits close to home for me," Lora said, addressing the crowd in both English and Spanish. "We must take action. And we are taking action, Bronx, because this is our Bronx, and look at us all here right now doing it."

Buunni's Riverdale location will join more than 240,000 other businesses that won't survive the pandemic, Lora said. That's why it's more important than ever for the city council and even the state legislature to pass laws that would strengthen commercial tenant rights, and give landlords less inclination to let a storefront go empty.

"It will help by creating an incentive for landlords to meet the market and lease to interested prospective tenants instead of holding out for artificially high rents that only a few sectors and national chains are able to pay," Prabasi wrote. "The bill proposes a tax on landlords who leave their street-level storefronts vacant for more than six months. It will encourage dynamism in neighborhoods, and a diverse array of services that residents need and want."

Hoylman didn't attend the rally, but legislation to help small businesses level the playing field with landlords does have the backing of state Sen. Alessandra Biaggi, who shared with the crowd her own personal connections with the Buunni location.

"Back in 2018, when we were first running, we were being told by businesses that we couldn't put a poster up, or were welcome really — we were just not supposed to be doing what we were doing," Biaggi said, reflecting back on her race to unseat longtime incumbent Jeffrey Klein. Buunni "quite literally opened their doors."

"Look at what we were able and have been able to accomplish because of people like both of you (Prabasi and Gurmu), and Buunni Coffee, who not only opened your doors, but raised the collective consciousness of the entire community."

When it's all said and done, while Buunni is certainly a business, Prabasi looks at the shop as a place that is a neighborhood gathering place. That can make a difference. That plays a major role in making a community special.

"In the end, it's you and us that made this," Prabasi said. "It's not about the building. It's about what we made together. And we will continue to move together as a community."