With hate and anti-Semitism growing, society needs this more than ever 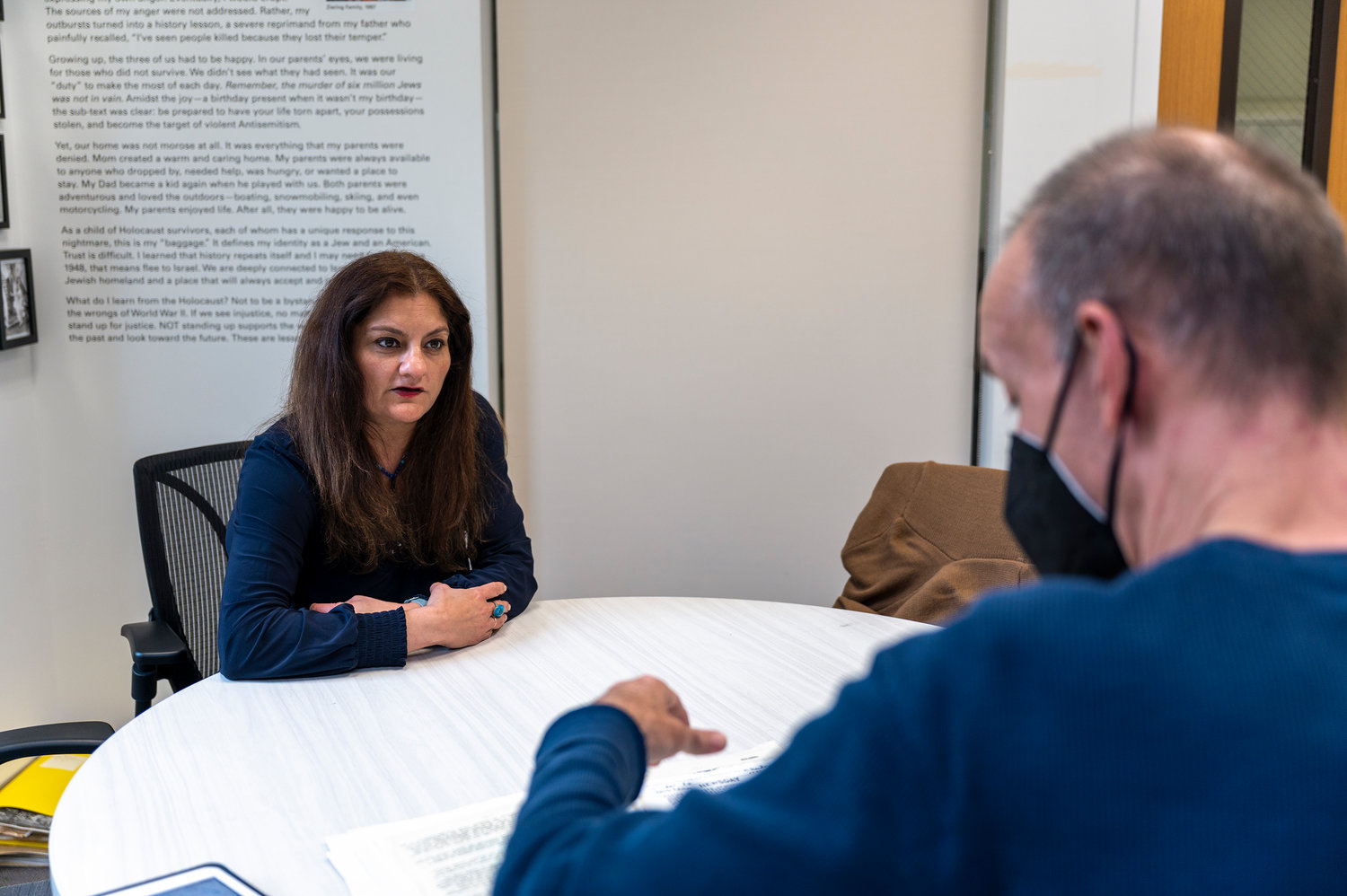 Afridi discusses course work with a colleague at the Holocaust, Genocide and Interfaith Center at Manhattan College.
HIRAM ALEJANDRO DURÃN 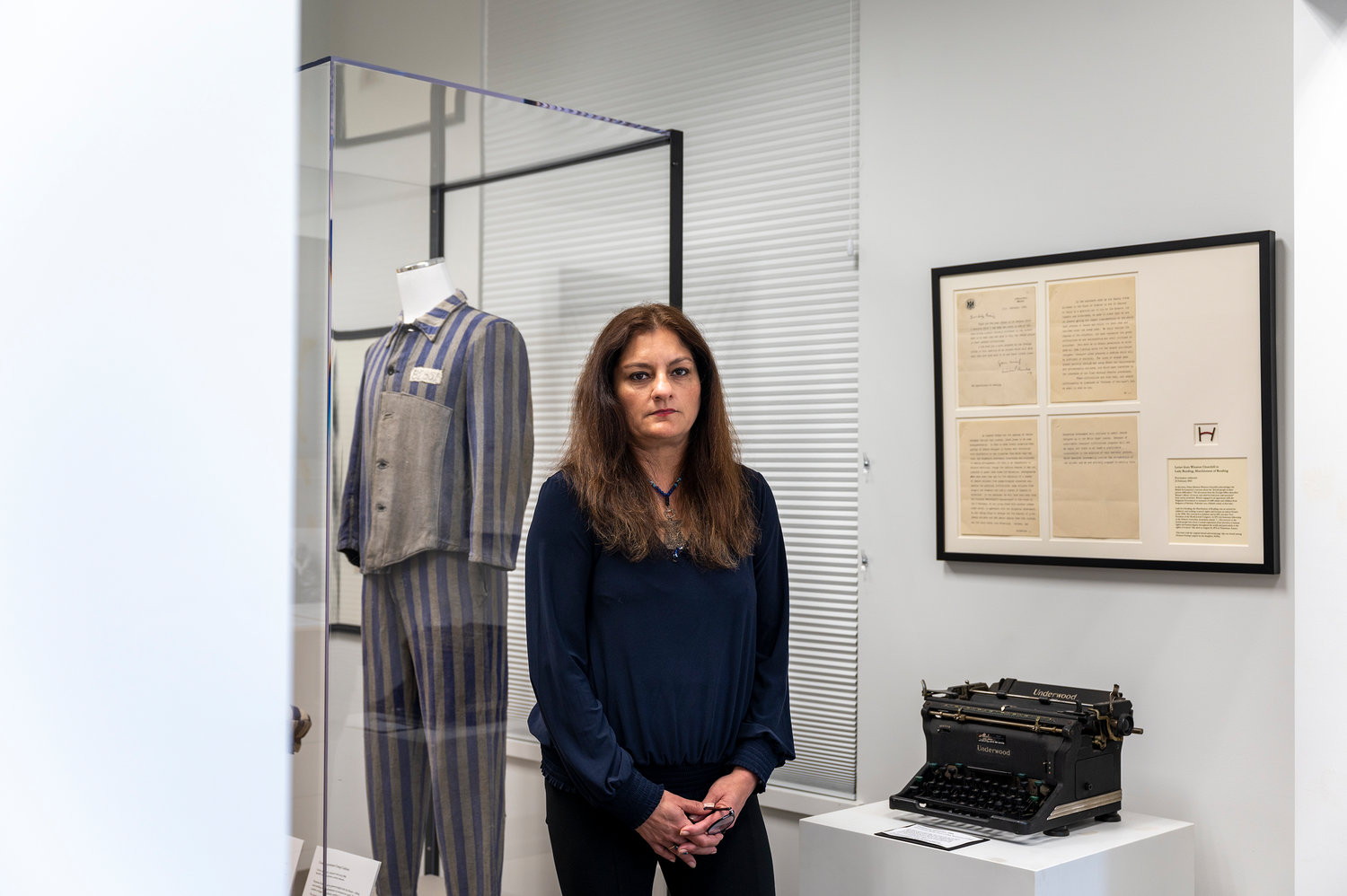 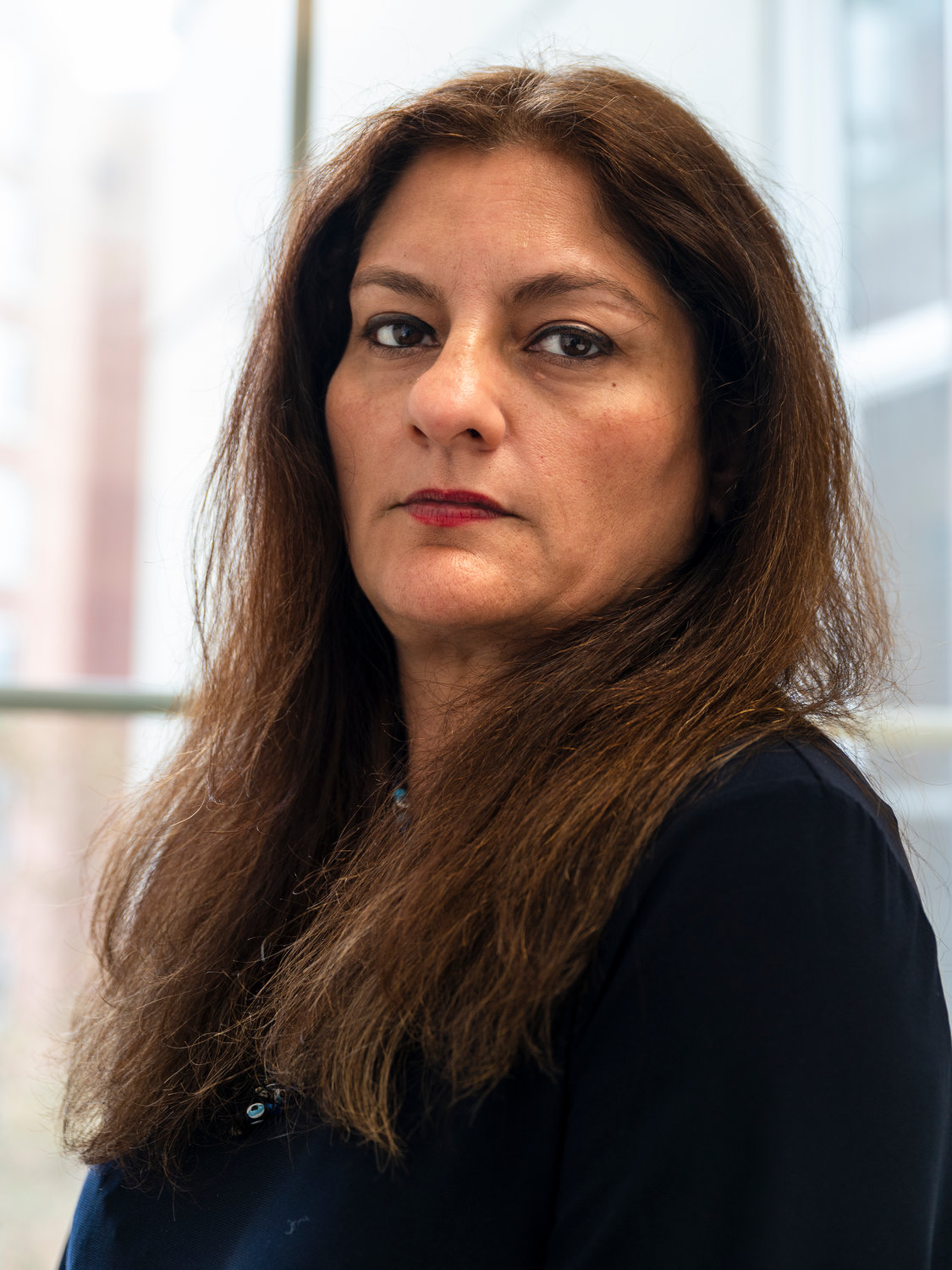 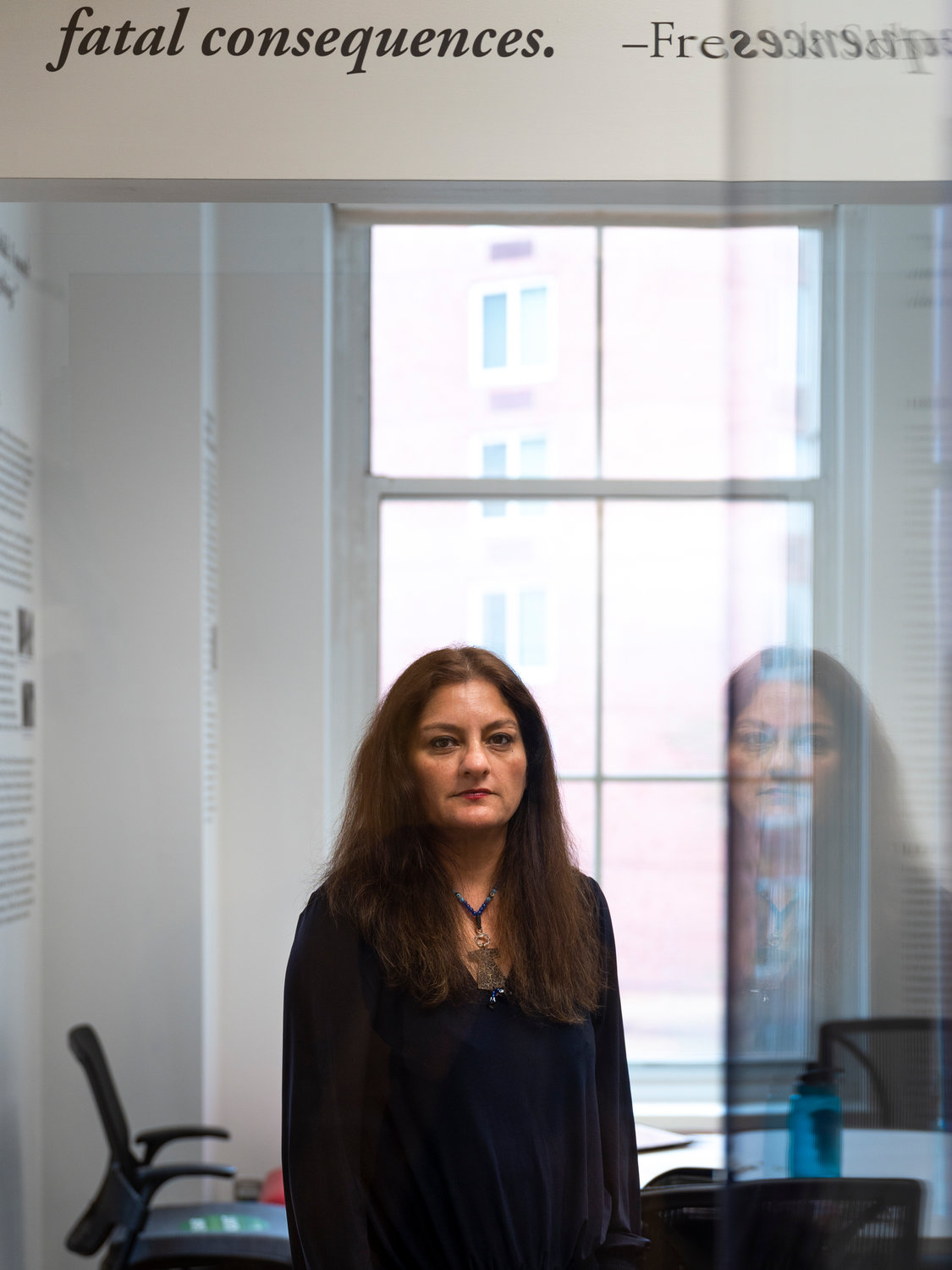 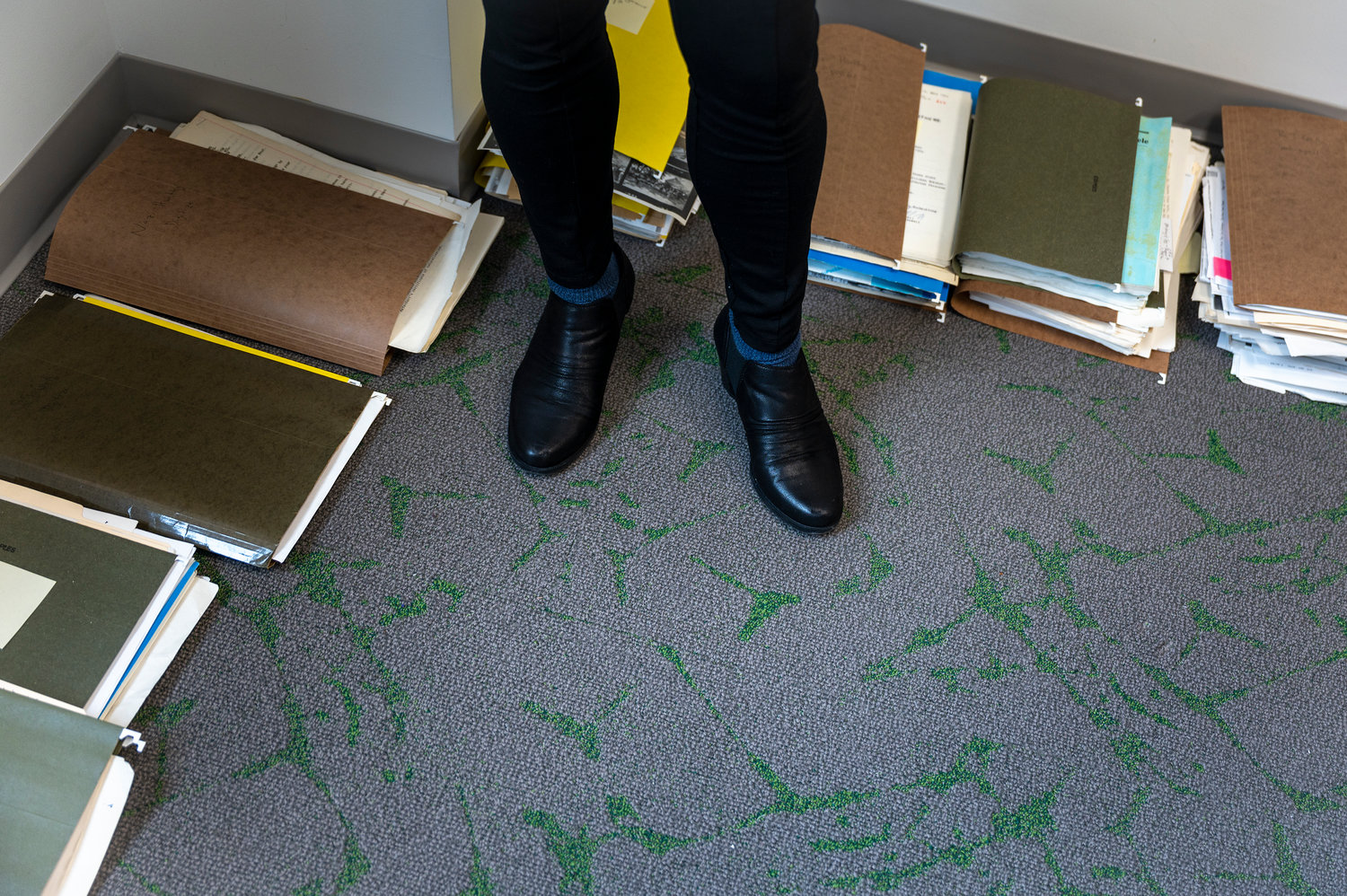 Documents Afridi and her colleagues at Holocaust, Genocide and Interfaith Center at Manhattan College are in the process of digitizing.
HIRAM ALEJANDRO DURÃN
Previous Next
By MICHAEL HINMAN

A Roman Catholic college building a center and curriculum around the Holocaust? It would never work. Hire a Muslim woman to lead it? It just can’t happen.

But it did — and 10 years later Mehnaz Afridi is sought after from around the world to share her perspective on some of the darkest moments in human history. And the Manhattan College Holocaust, Genocide and Interfaith Education Center she leads? Some would say it’s needed more now than ever as it celebrates its 25th anniversary this weekend.

Afridi never had any doubts, even when everyone around her seemed filled with it. Today, it’s near impossible to imagine anyone other than Afridi leading this important institution into the future. And they won’t have to.

“I wake up in the morning, and I think, ‘Oh, I know so many amazing people that are doing good work,’ so yeah, that gives me hope,” Afridi said. “And I think that’s where I’m really fortunate. I’m very grateful that I’ve managed to meet these wonderful people and know what’s going in places where you wouldn’t imagine.”

The Holocaust center is spending its anniversary they way any nonprofit should — raising money. And it’s doing it Sunday, Oct. 24 with a gala at Manhattan College’s Kelly Commons.

Tickets are $50, but includes dinner and drinks. And, Afridi adds, it’s also a great opportunity to meet Frederick Schweitzer — someone who stepped up to the plate when he was called, and laid the groundwork for what would become the Holocaust center and Manhattan College’s continuing work to end genocide around the world.

Schweitzer was teaching history when he was tasked by the archbishop to take on a project he never expected he’d be asked to do.

“They needed someone to write a 60-page summary on Judaism,” Schweitzer said. “Why they chose me, I don’t know. I wasn’t qualified. But no one else that was in the department was qualified.”

Yet, the archbishop didn’t just wake up one morning and decided he wanted to learn more about Jews. Instead, it was the mid-1960s, and the Catholic Church was undergoing radical change from the top through what was officially known as the Second Vatican Council led by Pope John XXIII — an event more commonly known today as “Vatican II.”

From that came a document known as Nostra aetate — a declaration establishing relationships between Catholics and non-Christian religions. Like those who practice Judaism.

“It’s a magisterial document which means that it’s binding, almost with the force of law,” Schweitzer said. “It’s the first document in the history of the church to speak affirmatively of the Jews and Judaism.”

And that document wasn’t going to end simply on sentiment. The archbishop wanted something short and sweet that could bring him up to speed on Judaism. Instead, the young professor delivered a 300-page book — and the start of what would become Schweitzer’s life’s work.

“You just couldn’t do it in 60 pages,” the professor said. “And heaven knows, Jewish history already suffered in gentile hands from omission and simplification. So I came back with a book of 300 pages. And I tuned out to be, as it were willy nilly, I became a Jewish historian.”

Schweitzer’s entire curriculum was refocused to discuss the Holocaust, anti-Semitism, and the plight of the Jewish people around the world. He ultimately wrote four books, led many lectures, and in 1996, founded what was then known as the Manhattan College Holocaust Resource Center.

“For us, it was the Holocaust Resource Center, and it became the Holocaust, Genocide and Interfaith Eduction Center,” Schweitzer said. “Its purview has broadened and deepened a good deal — which I didn’t anticipate, but I certainly accept.”

And ultimately, the pain of genocide is something humans never seem to learn from, which might explain why such atrocities continue to happen over and over and over again, Afridi said.

No one can compare one genocide to another, and one certainly wouldn’t begin to stack it up against the Holocaust. But that’s because each and every one of these mass killings and displacements are terrible on their own, Afridi says. And it’s just far too easy for us as a society to simply look the other way when genocide is taking place.

“Genocide is always there, you know?” Afridi said. “Unfortunately, it hasn’t stopped. So education is the most important thing.”

And genocides are not just a product of extreme hate 80 years ago. It continues in modern times in far too many places like the Darfur region in Sudan, where 400,000 people died.

Or Rwanda, which is believed to have claimed the lives of 800,000 Tutsi at the hands of the Hutu.

Then there were the “killing fields” of Pol Pot’s Khmer Rouge, or even more recently in what’s happening in Myanmar or in China with how that country has targeted Turkic Muslims known as Uyghurs.

“You just have to recognize that most people aren’t awake to those things,” Afridi said. “And they let it happen. If I wake up in the morning and see 50 percent of my neighbors disappeared, I’m going to have to ask some questions. But most people don’t.”

Manhattan College’s Holocaust center takes up a small group of rooms off the campus’s main library. It’s filled with the Herman and Lea Ziering Archive Collection, which includes a number of artifacts from the Holocaust, like the striped outfits prisoners of concentration camps were forced to wear during World War II.

The Holocaust — and any period with mass suffering — would be times many people would rather forget. But if we do forget, Afridi warns, then we’re just going to keep repeating those terrible points in human history over and over again.

“Just today I had a conversation with a student, and she said, ‘I don’t know what I would do if I could have rescued Jews,’” Afridi said. “But what if my family’s in trouble? What if my house is not on fire, but everybody else’s is? So that’s the question.

“We have witnessed genocide here in this country. With the Native Americans. Genocide against African Americans. Slavery. Lynching.

‘We still distance ourselves from that as if it never happened. And it’s not because white people are bad. Nobody’s trying to say that. But we have to be self-critical — we have to be conscious of our history.”

And that’s exactly what the Holocaust center has done for the past 25 years, and what it will keep doing for the next 25. White nationalism has been on the rise over the last few years, and even with a major ideological shift in the White House, that doesn’t seem to be slowing, Afridi said. The easiest path for many is just to ignore it, to pretend it’s not happening. But that just isn’t going to work.

What does work is paying attention to what’s happening, she said. Seeing it. Calling it out. And fighting it.

“I’m not trying to change the world,” Afridi said. “It’s just one person at a time.”