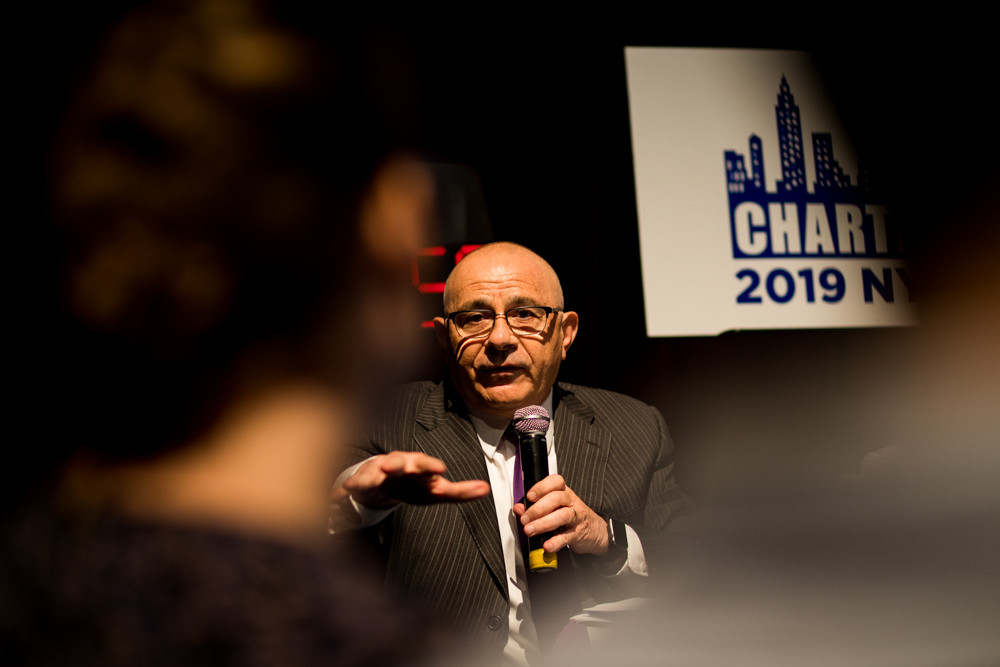 Sal Albanese, a member of the city council's charter review commission, asks a proponent of an elected civilian complaint review board for clarification at a public comment session for the review of the city charter at Lehman College.
JULIUS CONSTANTINE MOTAL 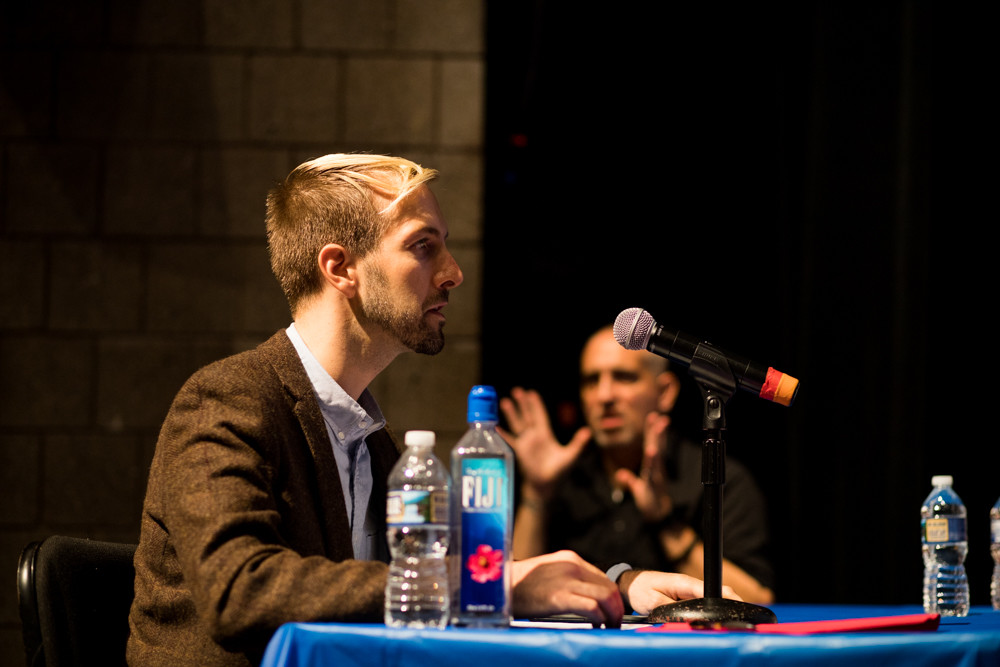 Jed Holtz, a political organizer for the Freedom Socialist party, asks the city council's charter review commission to consider giving non-citizens the right to vote at the first public comment session for the review of the city charter at Lehman College.
JULIUS CONSTANTINE MOTAL 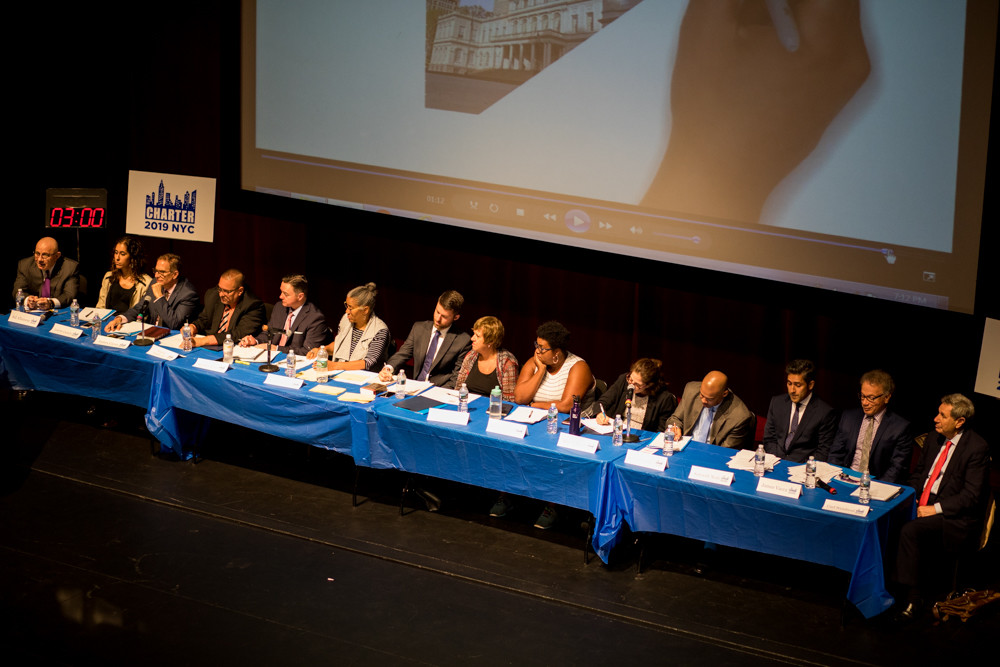 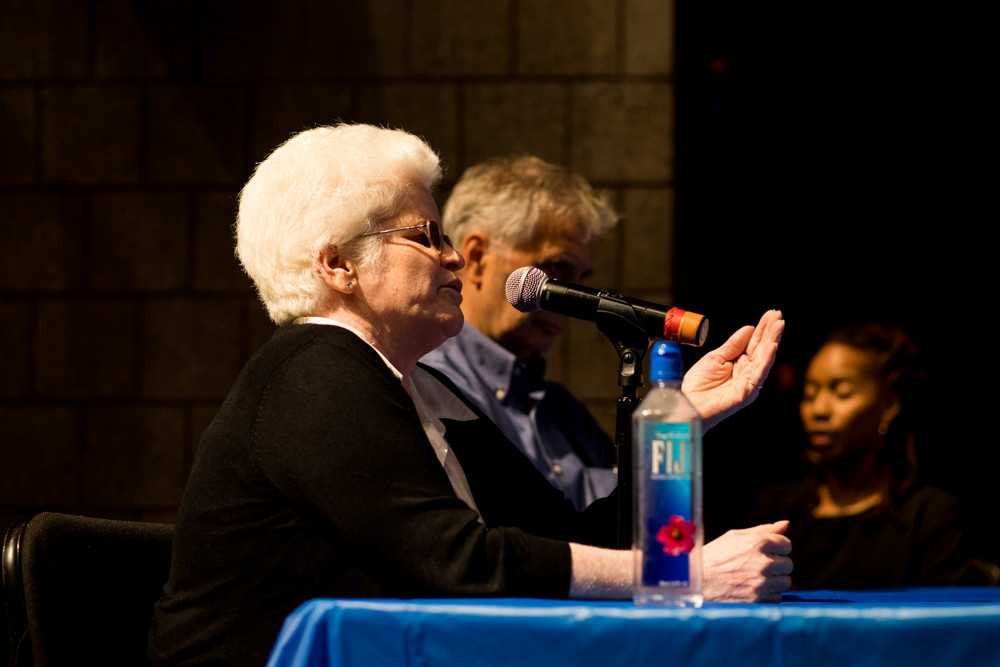 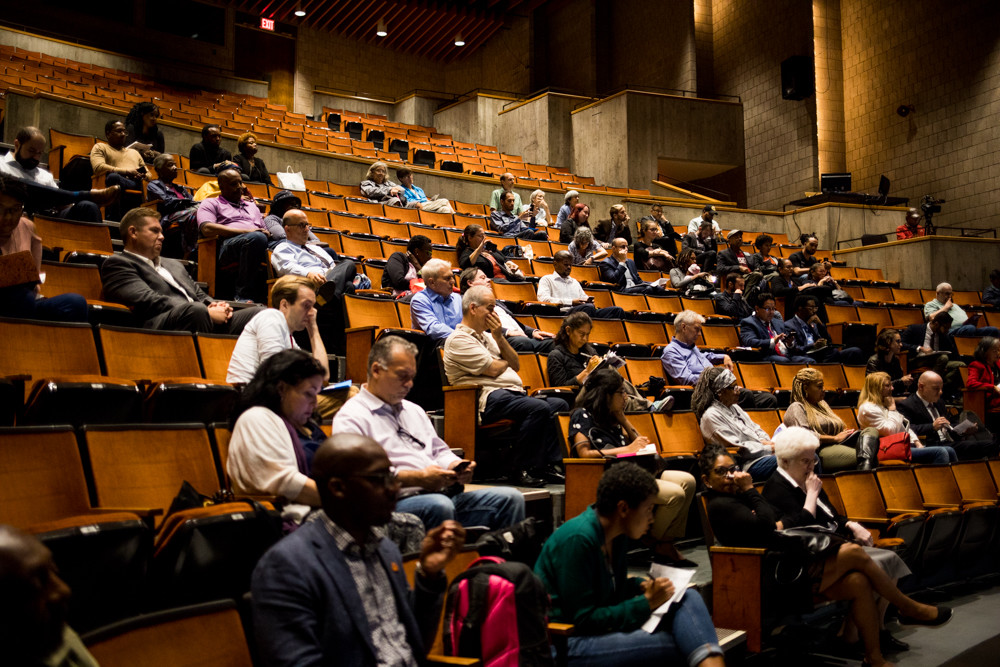 While a public comment session for a review of the city charter did not pack the house at Lehman College’s Lovinger Theater, it did bring together people who sought to introduce a variety of changes, including an elected civilian complaint review board and term limits for community board members.
JULIUS CONSTANTINE MOTAL
Previous Next
By MICHAEL HINMAN

Mayor Bill de Blasio’s commission to amend the New York City charter might be getting all the attention as of late, but they are not the only game in town.

The city council’s own charter review commission — looking to put a number of proposed revisions on the 2019 off-year election ballot — found its way to Lehman College last week, opening the floor to virtually every and any idea the public might have.

And did they have ideas. Like Carl Lanzano, a member of Bronx Community Board 12, which covers an area that includes Woodlawn and Parkchester.

His suggestion? Creating a pathway for non-elected community board members to get a seat on the city council — complete with voting powers.

“Community boards are the go-to agencies citizens go to when there is a problem or a civic question,” Lanzano said.

What Lanzano’s suggesting is that all community boards in a borough send representatives to create a borough-wide board. From there, that board will select a representative among its members to work alongside city council as a full-fledged member of city council.

“Just being a volunteer position, politics would be kept at a minimum,” Lanzano said. “And the allegiance would be to the people of the city who work the hardest to make the city work.”

While such a proposal likely would never make a referendum, one commission member — Lindsay Greene, who works as an advisor to Deputy Mayor Alicia Glen — wondered if Lanzano’s request wasn’t shedding light on larger issues in how community boards and borough president offices work together.

“Are there specific deficiencies in that relationship in that system that we’re trying to address?” Greene asked.

“The representative we have is excellent, but to me, they are elected officials,” Lanzano said. “As good as they are, they are sometimes beholden to the process rather than to the people.”

Lanzano wasn’t the only person at the hearing representing community boards. Linda Pedrosa is a member of Community Board 5 in and around Fordham. Her problem? The board chair has been around too long.

“We need to have term limits when it comes to electing a chair and executive committees of the board,” she said, citing Bola Omotosho, and his more than a decade as chair of CB5.

“Our votes count, but the thing is, at times, on our board what happens is that there is some favoritism, and I don’t see that this is right,” Pedrosa said.

“We should do things honestly, the right way, and proceed with the community openly.”

Yet, Pedrosa could get her wish a little earlier if voters approve a measure in November recommended by the mayor’s charter review commission that would give all community board members a term limit of eight years.

But Pedrosa doesn’t even need to wait that long, according to former city councilman — and longtime community board district manager — James Vacca.

“You may not know this, but your board has the right to implement term limits for officers,” he said. “Any community board can vote and modify their bylaws, and they can set limits.”

At Community Board 10, for example, officers are limited to two years. But other boards don’t have such restrictions, and can see chairs holding their position for not years, but decades.

Some of the biggest issues brought up at the review commission, however, had nothing to do with term limits or even community boards. Instead, the push is on to overhaul the city’s Civilian Complaint Review Board, the group tasked with holding members of the New York Police Department accountable.

Awareness over officer-involved shootings have skyrocketed over the years — even if shootings themselves may not have — and for some, the commission appointed by the mayor, the police commissioner and the city council is just not working.

“When the people of New York are on the wrong end of police misconduct, they have no power to defend themselves,” said Kaitlyn Greenough, a member of the NYC Campaign for an Elected Civilian Review Board.

“They have no power to gain real justice, while the police are allowed to literally get away with murder.”

The CCRB is stacked with members who are partial to police officers, Greenough said, and in the times they do recommend discipline, it’s up to the police commissioner to follow through — something he rarely does.

Greenough’s group wants an elected CCRB that has not only the power to investigate, but also the power to dole out punishment. If there is a criminal recommendation, the group doesn’t want it to go to the district attorney — who they say is too close to the police — but instead to an independent prosecutor.

Once members of the commission started asking Greenough questions about the plan, however, it seems more details still need to be worked out.

One issue, according to review commissioner Alison Hirsh, would be how police officers’ collective bargaining agreement would affect such an arrangement.

“I would have to get back to you on the details,” Greenough said. “We believe that the people should have their say, and that the board would make binding disciplinary decisions.”

The charter review commission continues its tour Thursday in Queens, before making additional stops in Staten Island and Manhattan through the end of the month.

For anyone who can’t make it out to the meetings, the commission also is accepting recommendations online at Charter2019.nyc.

The commission will then have through early next year to put together its recommendations for changes to the city charter, with any such proposals hitting the ballot in November next year.