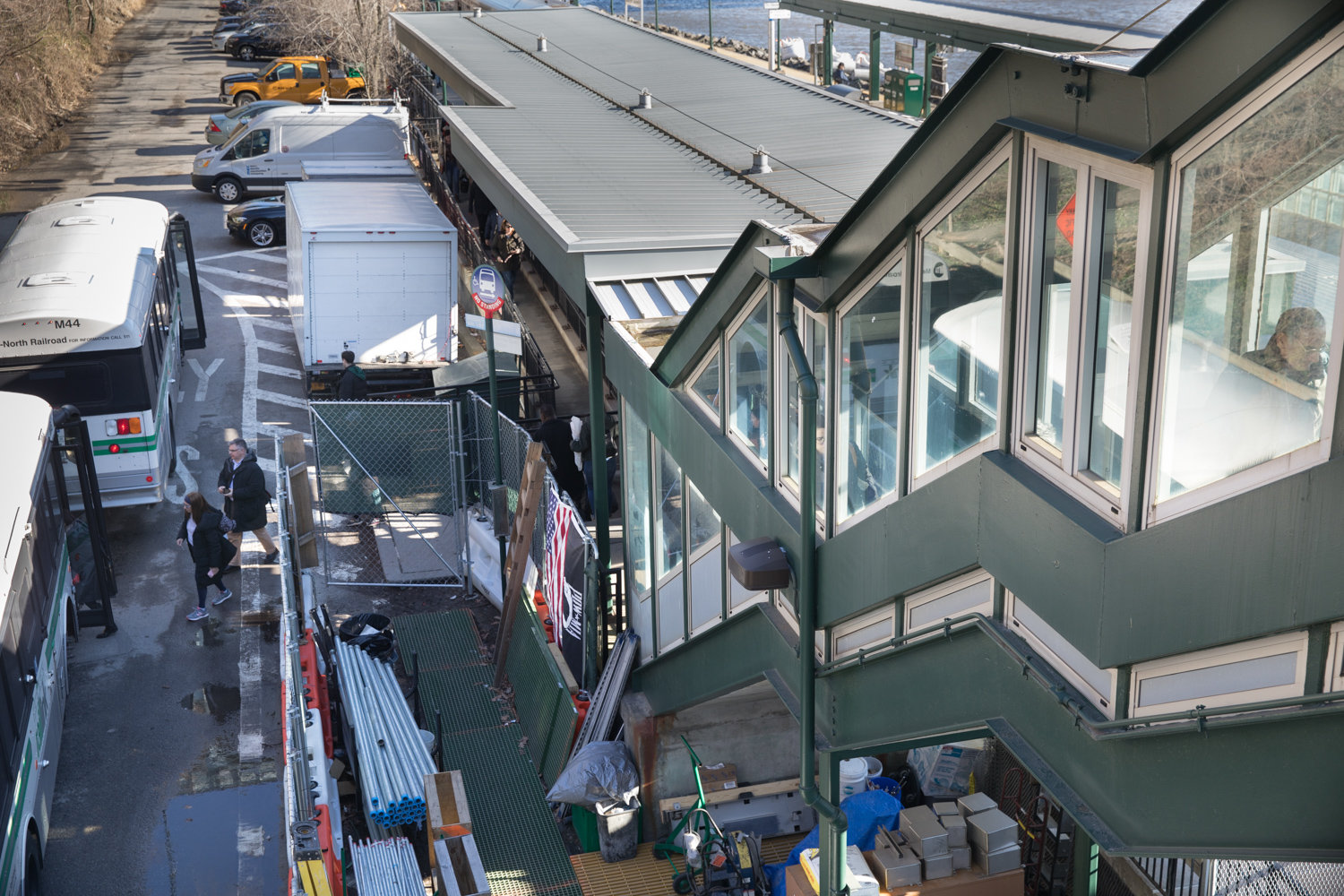 Commuters ascend the stairs at the Spuyten Duyvil Metro-North station while others board a Hudson Rail Link bus. Commuters have voiced their frustration about the station’s quality of the station, as well as its supposed lack of compliance with the Americans with Disabilities Act.
JULIUS CONSTANTINE MOTAL 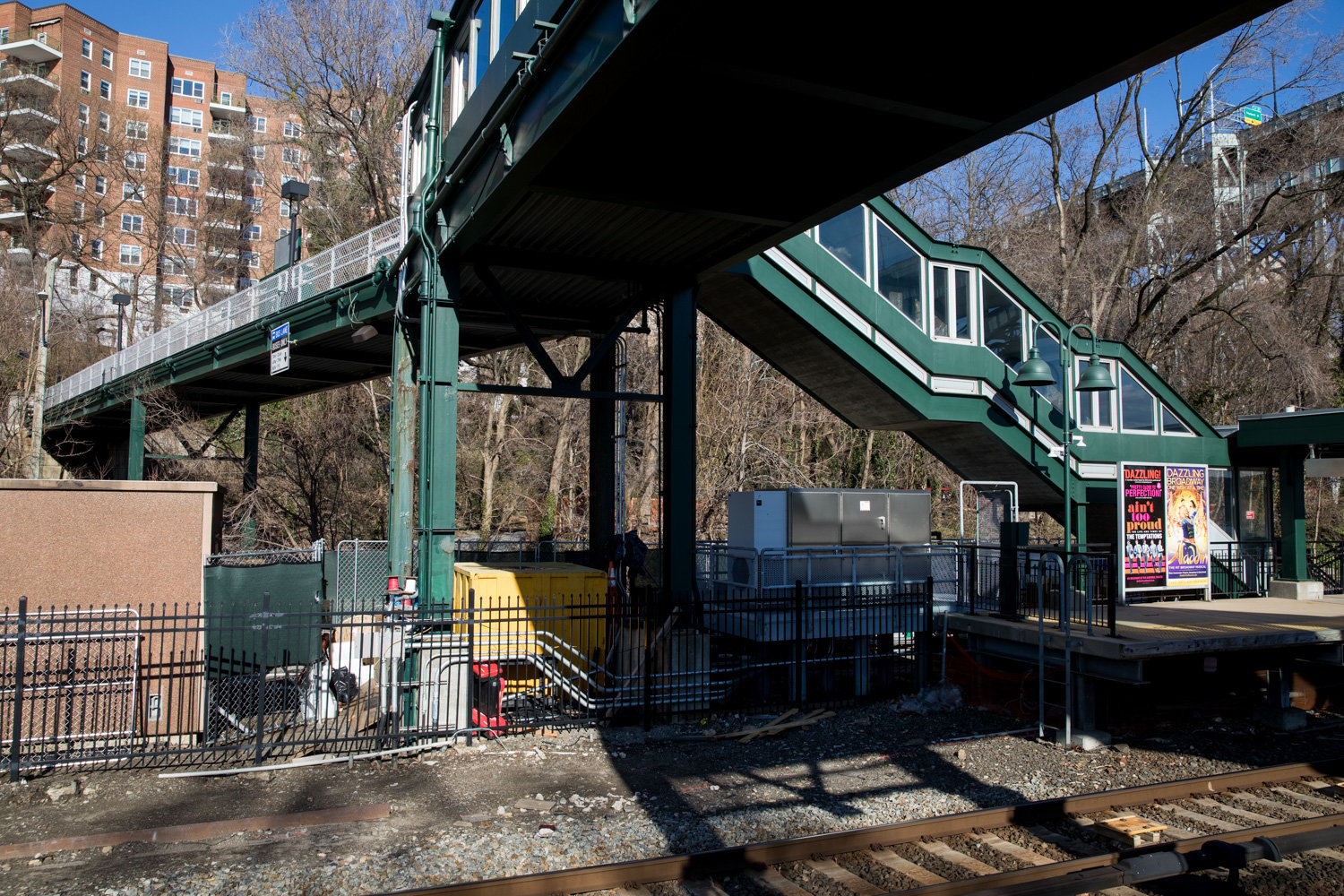 The Spuyten Duyvil Metro-North station is not, like a number of stations, compliant in properly fulfilling the needs of passengers with disabilities. Commuters, especially those with mobility issues, are frustrated with its continued lack of accessibility.
JULIUS CONSTANTINE MOTAL 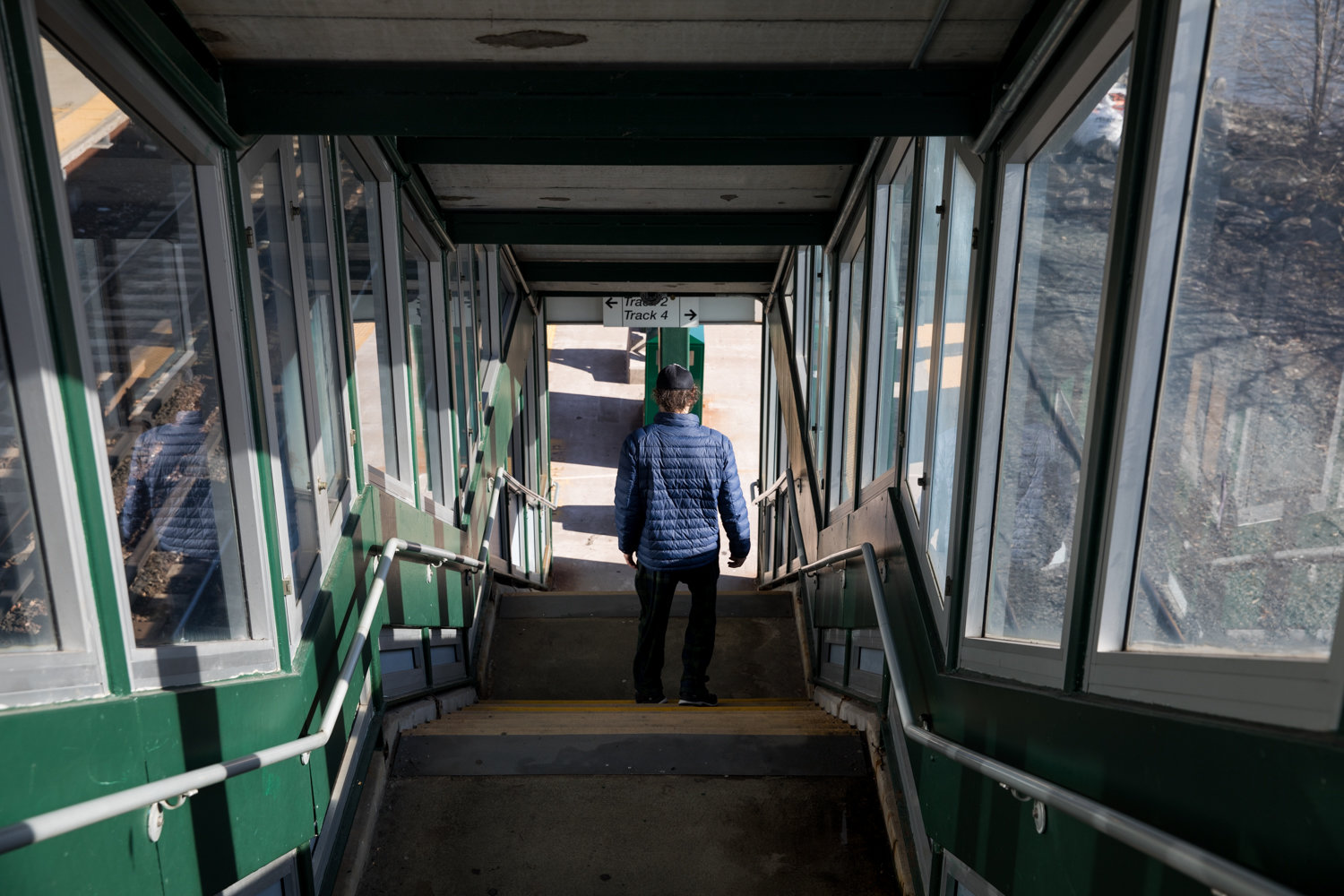 A commuter descends the stairs toward the Manhattan-bound platform at the Spuyten Duyvil Metro-North station. Commuters want the quality of the station to improve, and for it to be more accessible to those with personal mobility issues.
JULIUS CONSTANTINE MOTAL 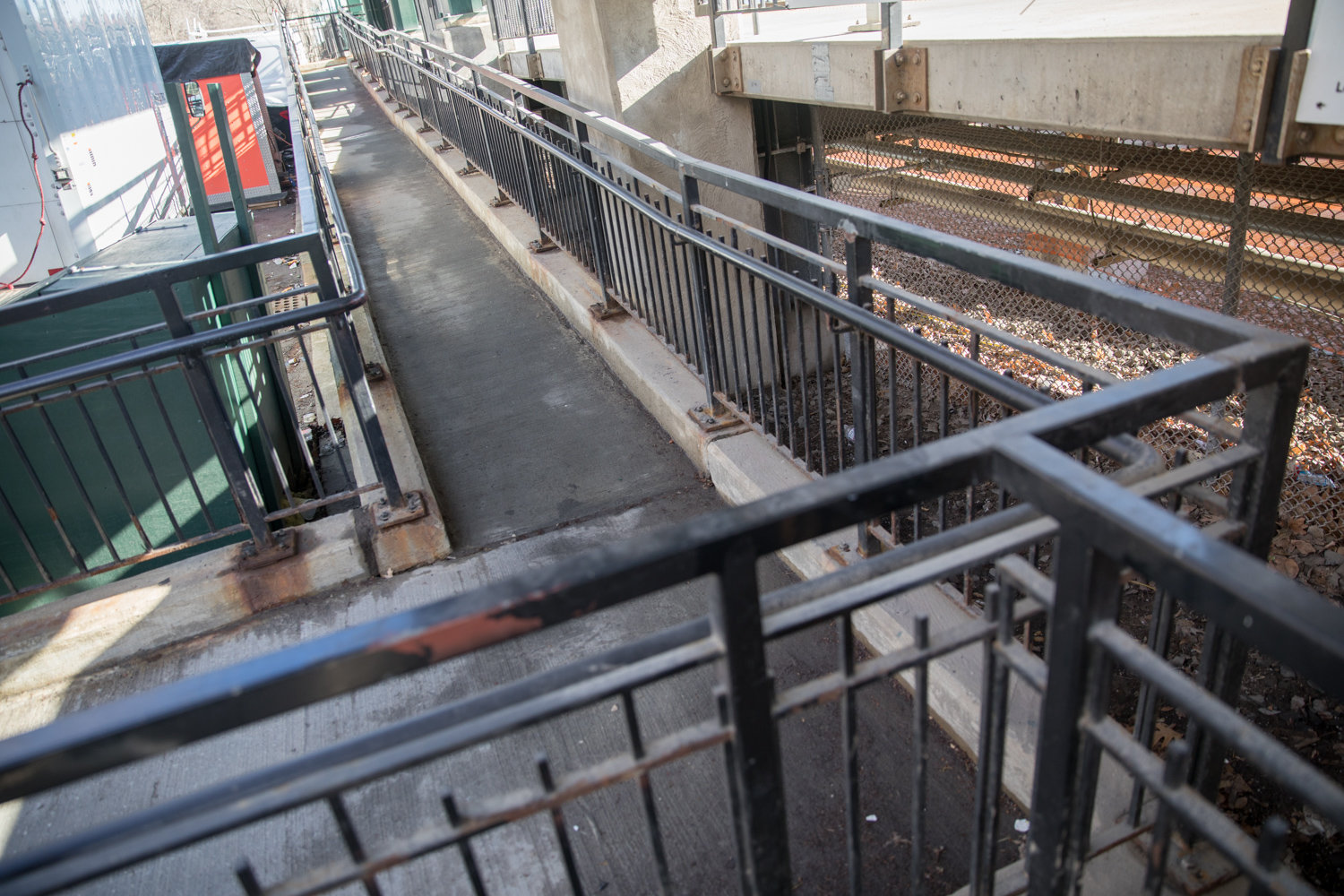 The Spuyten Duyvil Metro-North station’s only point of access for those with disabilities is a ramp from the northbound platform to the street. The Manhattan-bound platform is only accessible via stairs, as the station lacks an elevator.
JULIUS CONSTANTINE MOTAL 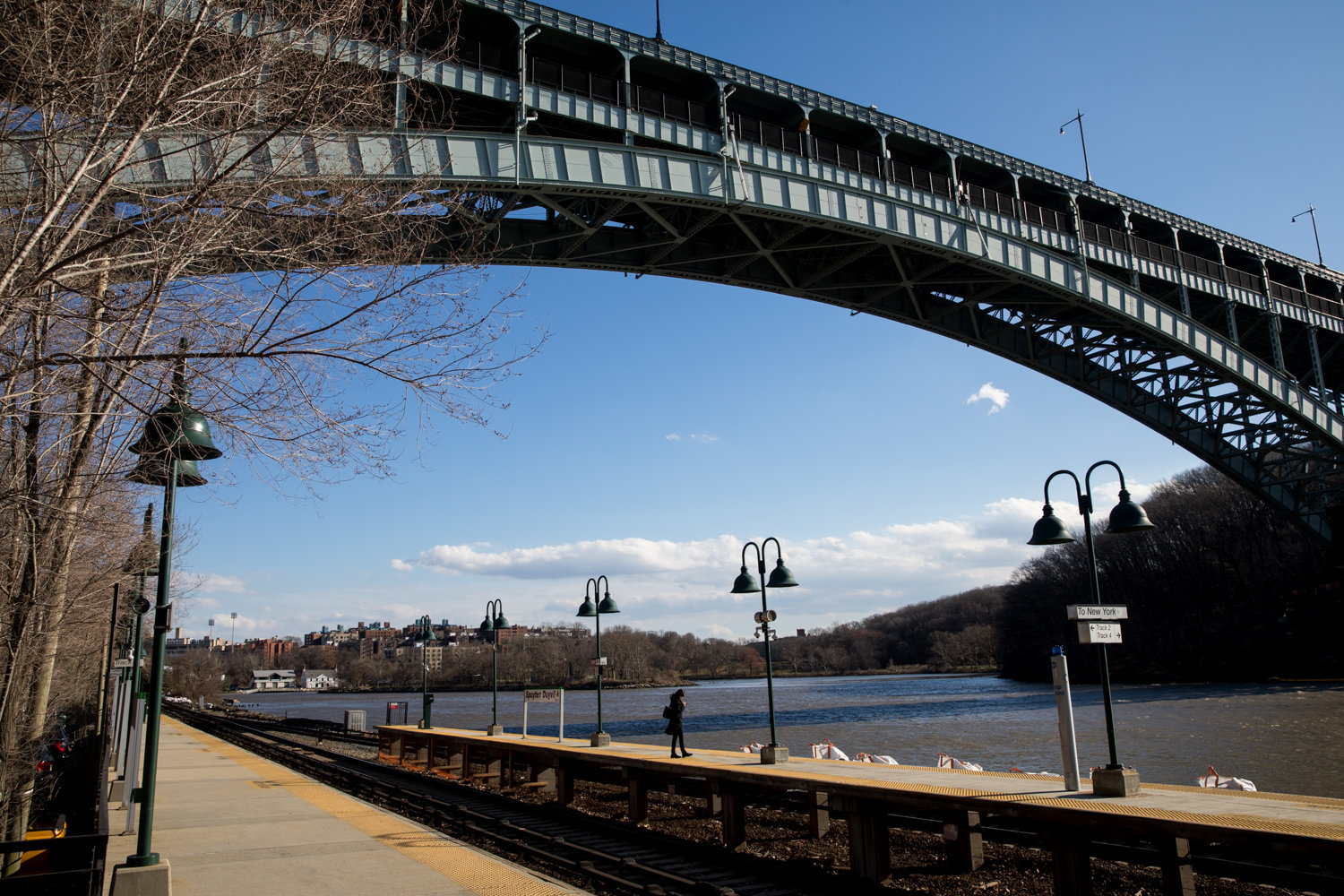 The Spuyten Duyvil Metro-North station is known for its picturesque views. What it isn’t known for is being accessible to those who have personal mobility issues, and might not be able to climb or descend the stairs connected to the station.
JULIUS CONSTANTINE MOTAL 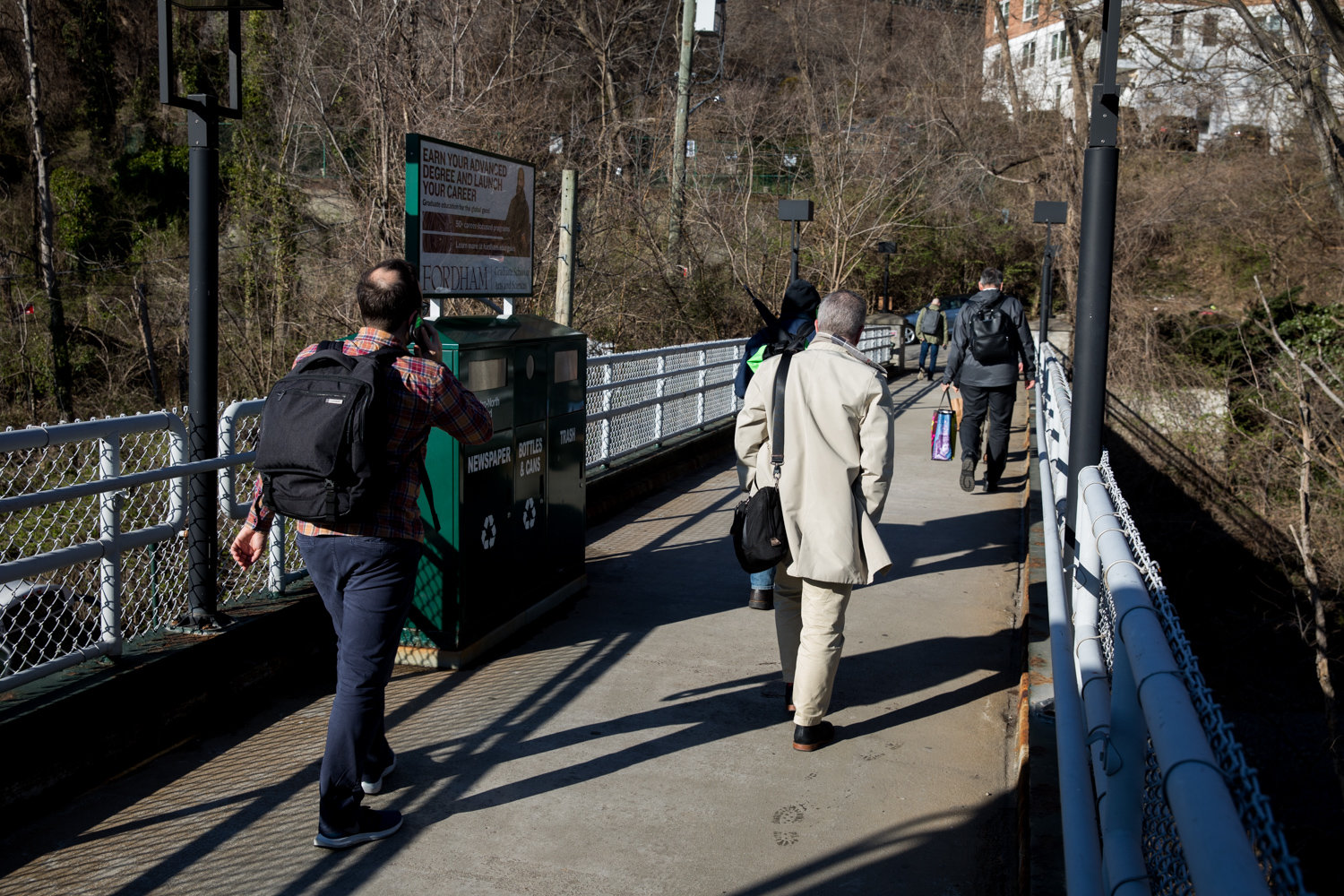 Commuters walk toward the north end of Edsall Avenue after climbing the stairs from the Spuyten Duyvil Metro-North station. It’s a journey after the trip that some cannot take because of disabilities, and a lack of elevator at the station.
JULIUS CONSTANTINE MOTAL
Previous Next
By KIRSTYN BRENDLEN

Getting around New York City isn’t too difficult. That is, as long as you’re not dependent on a cane, walker or wheelchair.

Sure, every bus in the five boroughs is accessible to those with mobility issues, but only a quarter of subway stations are equipped with elevators. Not only does that make those stations off-limits for many, it also means people with certain disabilities need to plan out their travel well in advance, even if it means just heading to the grocery store using the subway.

Such lack of accessibility isn’t exclusive to subways, however. Metro-North trains — an important source of transportation for those in Riverdale and Spuyten Duyvil — are nearly impossible to board thanks to their tall stairs and lack of elevators. While intended as a commuter rail, it’s used by some as a de facto subway line, carrying riders comfortably and quickly into Midtown, or in other parts of the tri-state area along the Hudson Line.

Of the three stations, only one — Riverdale — is equipped with an elevator. At Marble Hill, riders have to take stairs down to the station from the street. And at Spuyten Duyvil, while a ramp does lead from the parking lot up to the northbound platform, the only way to reach southbound trains is to go up stairs to cross a small platform and then back down the other side.

That’s not the only complaint frequent rider Diane Ferretti Perillo has about the station. She lived with her husband on Palisade Avenue until about four years ago, both using Metro-North fairly regularly before moving to Florida for three years.

When Perillo moved back to the same Palisade Avenue apartment she had lived in before her sojourn south, she started using Metro-North about twice a week to head into Manhattan.

“During that time before we moved, the station was as bad as it is now,” she said. “This is why I found the whole thing shocking.”

Her neighbors have noticed the same issues.

“I’ve spoken to many people, I have a very, very excellent co-op that I live in, and everyone acknowledges the same issues,” Perillo said. “How aggressive people have been in trying to get the proper parties involved, I don’t know.”

Her biggest gripe is with the stone step street that leads from Palisade to Edsall. It’s a convenient way for commuters to walk down to the Spuyten Duyvil station — or, she said, it should be.

“The stairs, now, are atrocious,” Perillo said. “They’re not really safe, they’re not maintained. The railing is so rusted that you don’t even want to touch it.”

Even if she did want to use the railing, there’s another issue. Now that there’s construction going on at the former site of the Villa Rosa Bonheur, which borders the side of the step street, Perillo said the scaffolding is making it impossible to grab the railing.

She also wished the Rail Link bus that’s supposed to help bring passengers to the station actually stopped closer to the step street. According to the Rail Link schedule, the bus stops at Kappock Street and Knolls Crescent, and at Henry Hudson Parkway and Independence Avenue. But not on Palisade.

Some Metro-North stations are scheduled to become accessible under the MTA’s current capital plan. Williams Bridge, Woodlawn and Wakefield stations are all set to get two new elevators each, leading to both the north and south platforms. Some had sued the MTA looking for a specific timeline on when stations will be made accessible. However, a district court judge dismissed that lawsuit on Tuesday, according to published reports.

It isn’t clear whether the step street would be addressed in accessibility improvements implemented by the MTA. The city’s transportation department, not the MTA, maintains those particular streets like the one at Spuyten Duyvil.

“A lot of stations were built before the ADA was passed about 30 years ago,” said Jaqi Cohen, the campaign director at the Straphangers Campaign, about the Americans with Disabilities Act. “We’re seeing a very slow rollout of accessibility. I mean, extremely slow. And it’s a huge burden for riders.”

Climbing up and down stairs can be difficult for senior citizens and people with physical disabilities, she said.

As the agency eyes “greater equity” in terms of fares, Cohen said, she hopes they also would address accessibility issues on commuter rail systems.

“It’s enormously difficult to navigate the transit system as a whole if you can only use stations that are accessible,” Cohen said. “In part because there are so few, and in part because oftentimes elevators break down within the system, and that severely limits access that people have.”

Although some lawmakers like Assemblyman Jeffrey Dinowitz have pushed to add elevators to many, if not all, stations inside his district, Perillo was frustrated that calls to other local elected officials had gone unanswered, wondering who would step up to help.

“The deterioration and the issues are still here, but worse,” she said. “So, that’s where I’m at.”