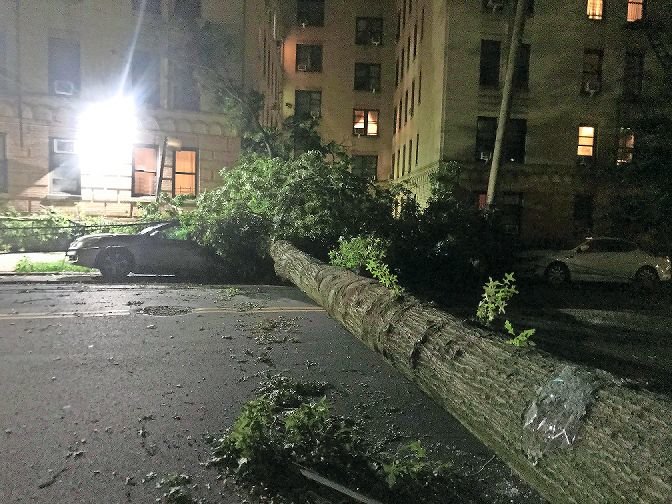 Hurricane Isaias downed hundreds of trees as it swept the northeast Coast, including one near Sedgewick Avenue, which took down power lines and crushed a parked car. More than 20,000 Bronx customers lost power, according to Con Edison, leaving families without lights, air conditioning, or refrigeration for days. Elected officials across the city criticize the company for a lack of preparation before the storm.
MICHAEL HINMAN 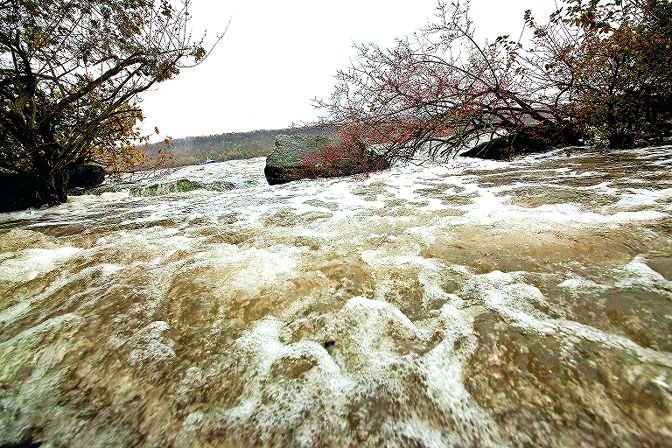 With 23,000 customers without power in the Bronx following Hurricane Isaias’ tear through the borough, the outage was Con Edison’s second largest in company history, following only Hurricane Sandy in 2012. Customers and elected officials alike criticized the company for failing to prepare for the storm, and for long periods of time without power as the company worked to restore power.
MARISOL DIAZ / File 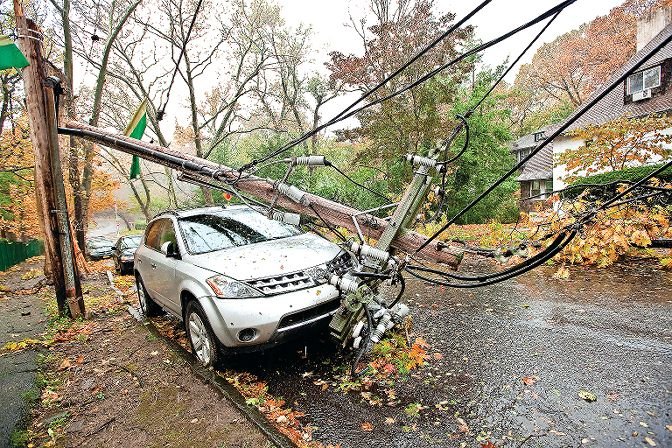 More than a million Con Edison customers lost power during Hurricane Sandy in 2012, the largest power outage in the company’s history. Earlier this month, Hurricane Isaias swept the northeast, causing 300,000 outages, including 23,000 in the Bronx — roughly the same number as lost power in the borough during Sandy. The power company has been criticized for failing to prepare for the storm, despite warnings of more frequent and severe storms in years to come.
MARISOL DIAZ / File 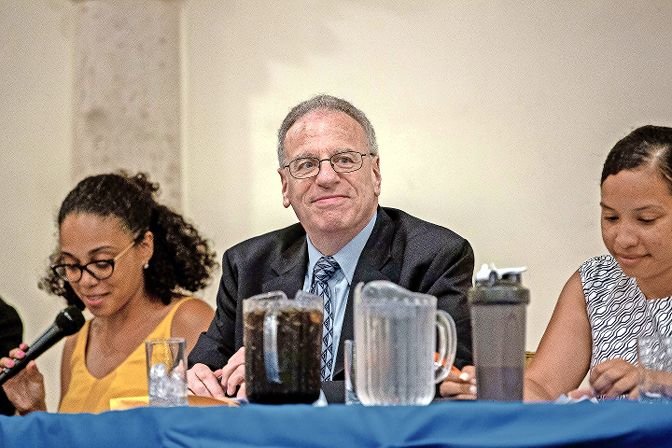 Assemblyman Jeffrey Dinowitz has been critical of Con Edison for what he sees as a failure to prepare for severe storms like Hurricane Isaias, which caused more than 20,000 households to lose power in the Bronx. Dinowitz, who has for years been pushing to create an independent consumer advocate who would fight for lower prices and fair treatment for customers. Dinowitz has updated the bill and is once again fighting for its passage in state government.
EIAN KANTOR / File
Previous Next
By KIRSTYN BRENDLEN

It was about mid-day on Aug. 4 when lights started to flicker out across New York City.

Tropical Storm Isaias, the ninth named storm of the 2020 hurricane season, flooded streets and sidewalks, and downed trees and power lines with winds upward of 50 mph.

That created some dark parts of the city, especially in the Bronx, where Con Edison estimates some 23,000 households, buildings and businesses in the borough lost power.

One day without power is inconvenient, but not the end of the world. But as customers started reaching out for help, they heard expected to wait times upward of eight days for power to be restored. Temperatures on some days were in the 90s, and with many people still working from home, there weren’t many other places to go.

Elected officials, all the way up to Gov. Andrew Cuomo, criticized ConEd immediately. While crews seemingly were out in abundance, working to restore broken poles and wires, Assemblyman Jeffrey Dinowitz thought ConEd was just too far behind.

“I can appreciate that there may have been a lot of damage, but much of this destruction could have been prevented had Con Edison buried their aboveground power lines years ago,” Dinowitz said, in a release. “Instead, they chose to continue putting shareholder profits above the interests of people like us.”

Dinowitz has long pushed a bill creating an independent state consumer advocate, and in the wake of the storm, he’s picked up the mantle again.

Dinowitz’s updated bill would include ensuring those who need electricity for medical devices would be supplied with generators or an alternate place to stay. Emergency support locations would give people without power a place to charge cell phones and store their refrigerated foods and medications, the Assemblyman said, while increasing transparency between the company and customers.

Every time there’s a major storm and power lines come down, there’s the same debate: Why aren’t power lines buried? When is that going to happen, sparing us the indignity of having a tree branch knock out power for a week?

Jessica Haller, a city council candidate and long-time climate activist, said the United States has been falling behind for a long time, and burying power lines is only one small step forward.

“I’ve been giving climate talks, these climate reality presentations, for many years,” she said. “Imagine, if you will, a power pole with like a rat’s nest of wires at the top.”

During presentations, Haller notes that developing areas will never deal with that tangle of wires — the technology will “leapfrog” right over the need for them.

“Why am I even thinking about burying wires, when in rural Africa, we’re talking about leapfrogging technology?” she said.

Instead, Haller would like to see focus shift to community-owned, locally based renewables. That could mean an apartment building combining solar panels on its roof with another locally based energy source.

Haller isn’t the only one looking for community-owned power. Bronx Climate Justice North, which focuses on everything from the Putnam Trail to closing down the Indian Point nuclear power plant, is working alongside the city’s chapter of the Democratic Socialists of America on its public power campaign, endeavoring to take electricity from a privately owned commercial asset to a publicly owned necessary resource.

“We change from a power plan grid focused on generating wealth from investors, and you focus on something that’s locally accountable,” said Steve Fox, who works on the organization’s ecological projects.

The authority says it provides the lowest-cost electricity in the state, most of which is used by nonprofit organizations, other state organizations like the New York City Housing Authority, and some private businesses and organizations.

“Public utilities as opposed to investor-owned utilities, you see that public utilities provide better service for cheaper rates,” Fox said. “Specifically, they have less blackouts, and their blackouts are shorter.”

Con Edison did not return a request for comment.

During Hurricane Sandy, millions of people across the Northeast lost electricity, some for weeks on end. ConEd wasn’t the only utility struggle. In Long Island’s Rockville Centre, power came back for some within 24 hours, while everyone else  had to wait more than a week.

Why? Rockville Centre is one of few Long Island towns with its own grid and electricity generated in part within the town’s plant, supplemented by the power authority and other sources.

As climate change progresses, New York is expected to see more frequent and more intense tropical storms and hurricanes. The National Hurricane Center predicted at least 19 major storms during the 2020 season, including nine named storms that have already swept the Atlantic.

“We’ve known for years that weather events will continue to hit the area with more frequency, coming here,” Fox said.

“What’s more concerning, though, is not even that.”

Even without a direct hit, he said, ConEd wasn’t prepared to handle the storm and the resulting outages.

In a hearing called by state lawmakers to investigate state energy utilities, ConEd representatives said they were caught off-guard by changing storm forecasts. While they were prepared for the original forecast with slower winds, what ultimately came through the city was higher sustained winds, and more damage than they had expected.

“I am glad that Gov. Cuomo has asked the Public Service Commission to investigate Con Edison’s response to these outages along with other utility providers across New York state,” Dinowitz said. “It is evident that the energy status quo in New York is broken.”