Confidence waning in de Blasio before, after closures 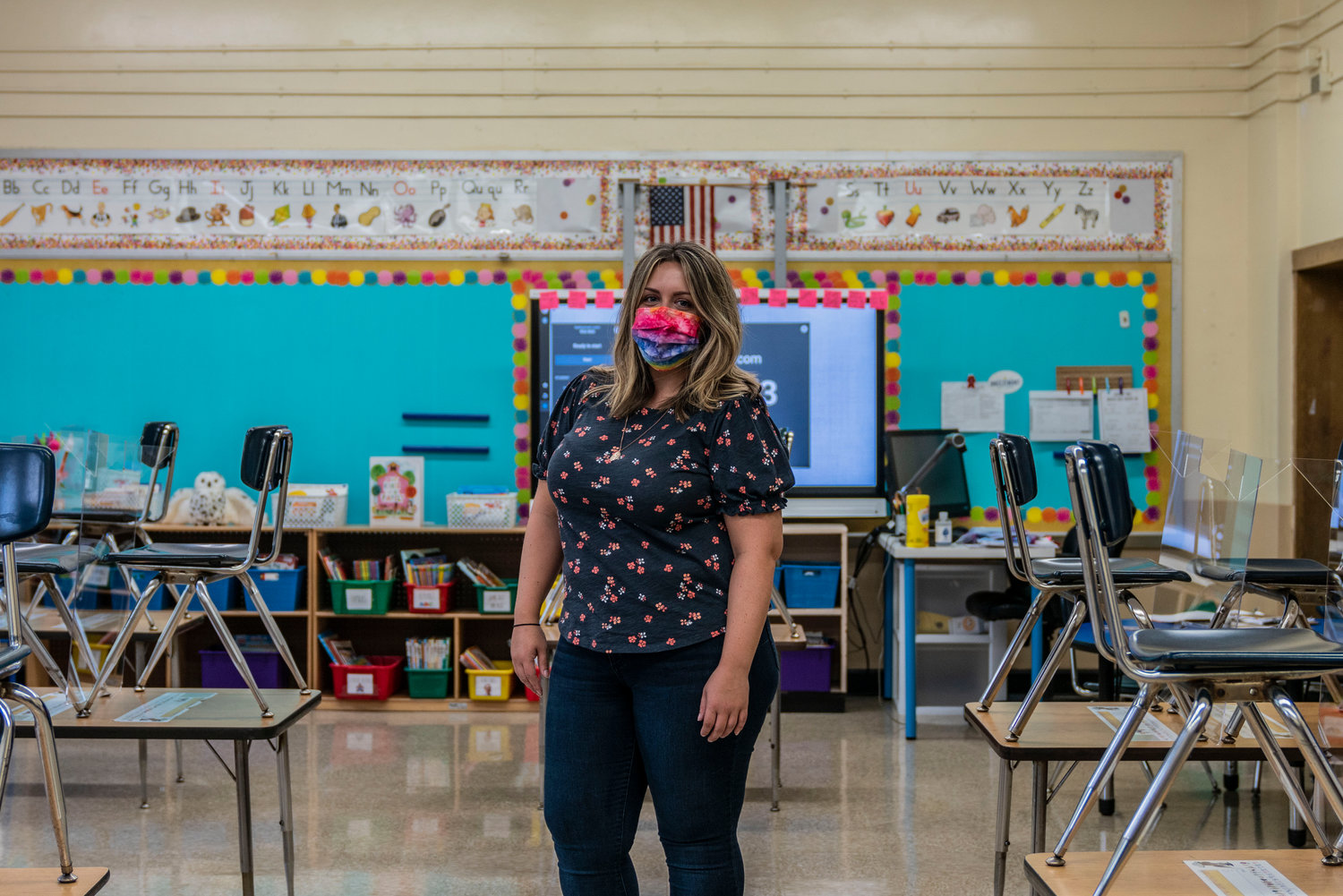 Kindergarten teacher Aleashia Castello’s first year at P.S. 24 Spuyten Duyvil kicked off with a bang. Over the course of a week, public schools reopened across the city, only for some of them in hotspots to once again close only days later.
HIRAM ALEJANDRO DURÁN 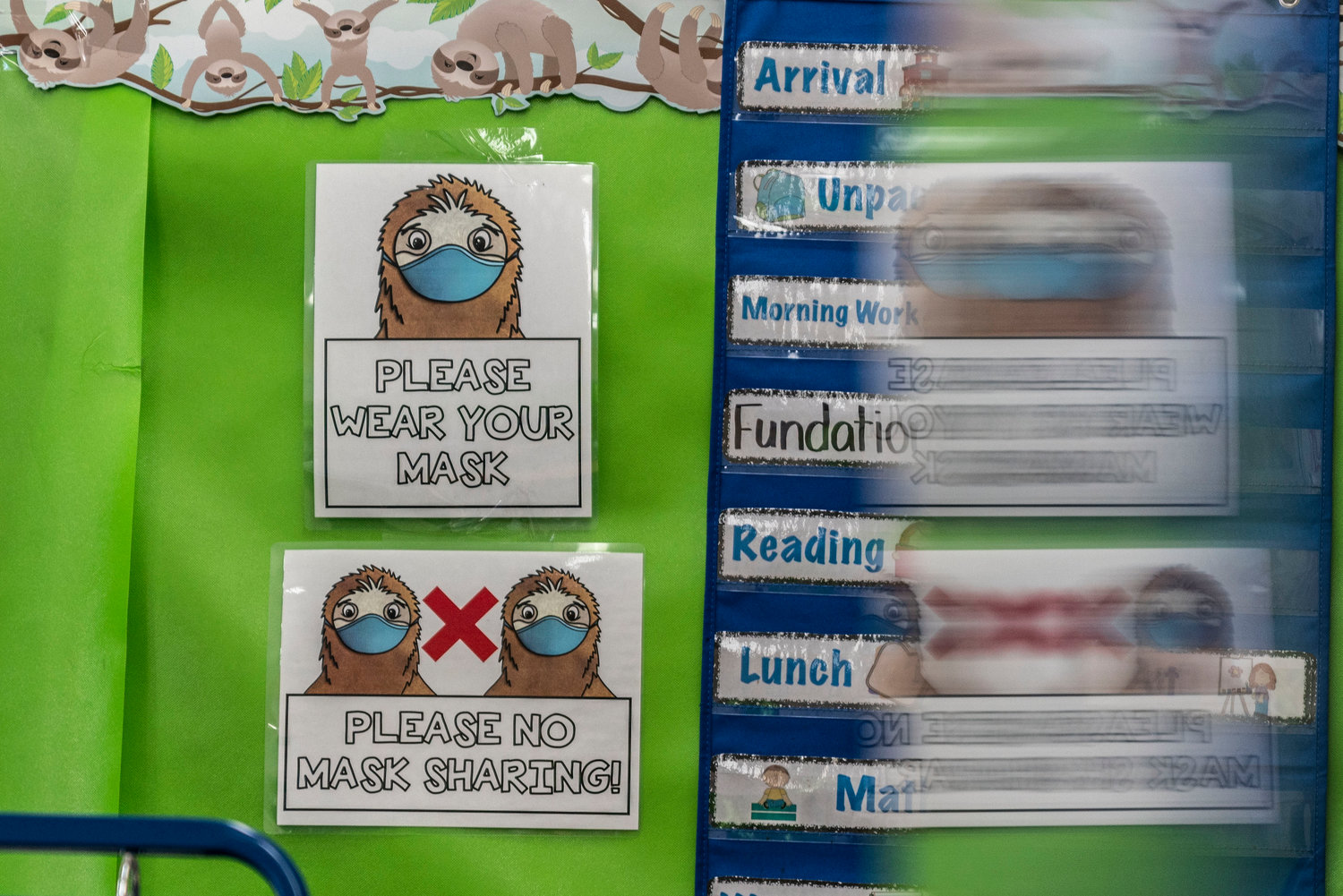 These sloth-themed mask-wearing reminders at P.S. 24 Spuyten Duyvil keep coronavirus on the mind. The majority of the city’s public schools reopened for in-person classes last week, but was heralded with a unanimous vote of no confidence from the city’s principals union.
HIRAM ALEJANDRO DURÁN 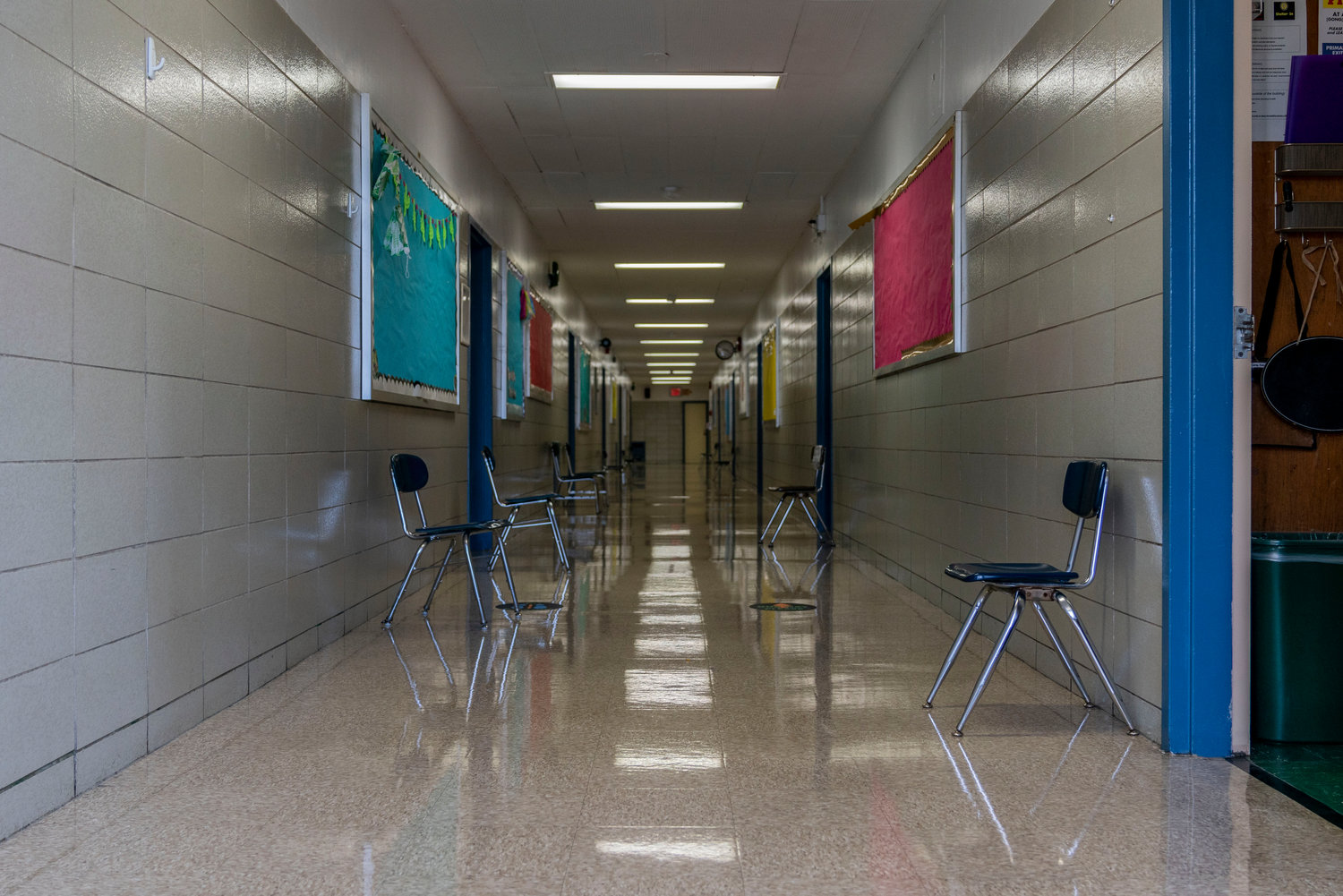 To avoid hallway crowding, each classroom at P.S. 24 Spuyten Duyvil has at least one chair outside for students to sit and wait to be called on by a hallway monitor. Measures like this will hopefully help keep public schools open as long as possible in the wake of the coronavirus pandemic.
HIRAM ALEJANDRO DURÁN 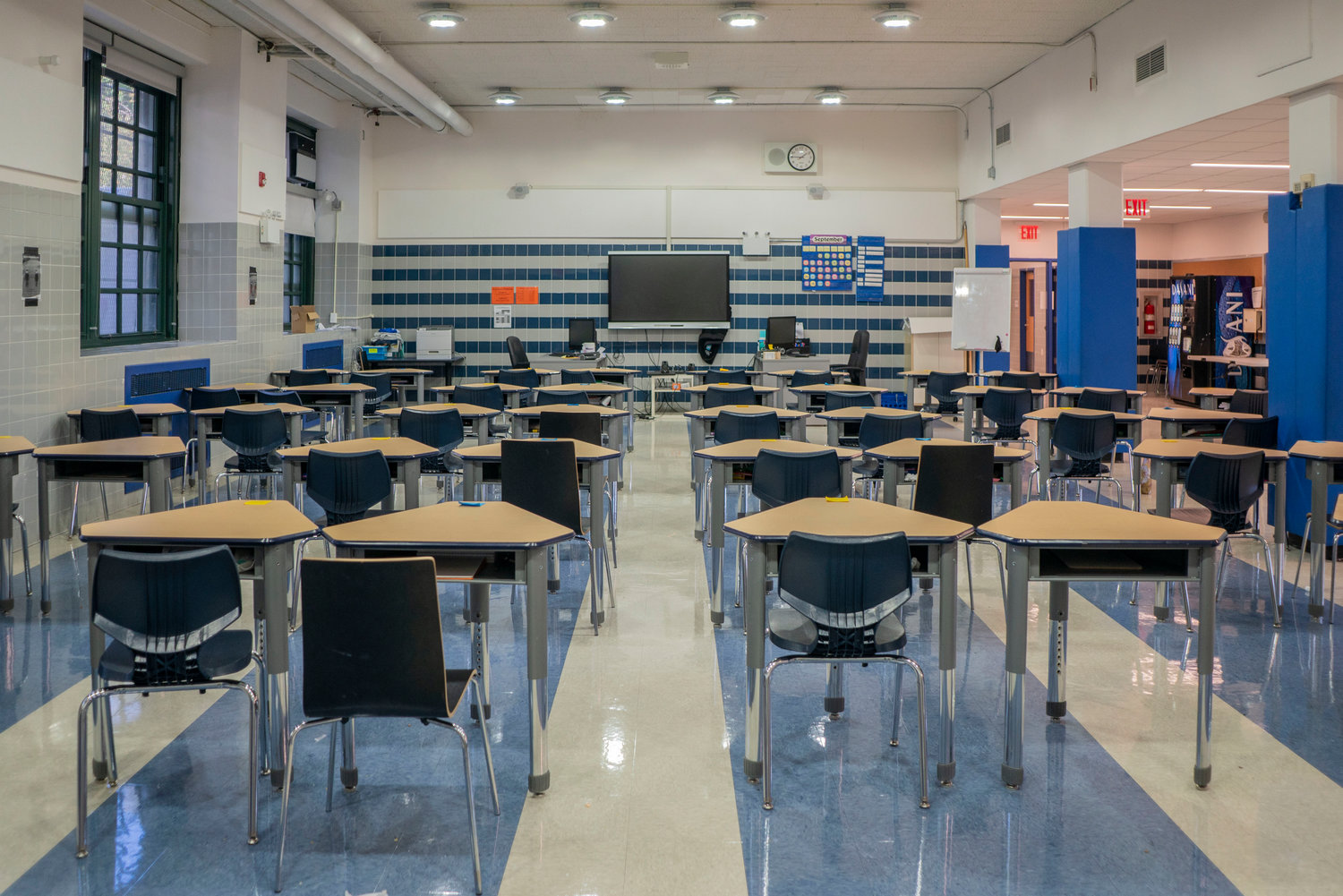 Now that students receive their grab-and-go lunches in class, the cafeteria at P.S. 24 Spuyten Duyvil has been transformed into a classroom with ‘A’ and ‘B’ day desks marked with sticky notes. In-person learning is still viable in this part of the Bronx, but that’s not the case anymore for schools in coronavirus clusters in Brooklyn and Queens.
HIRAM ALEJANDRO DURÁN 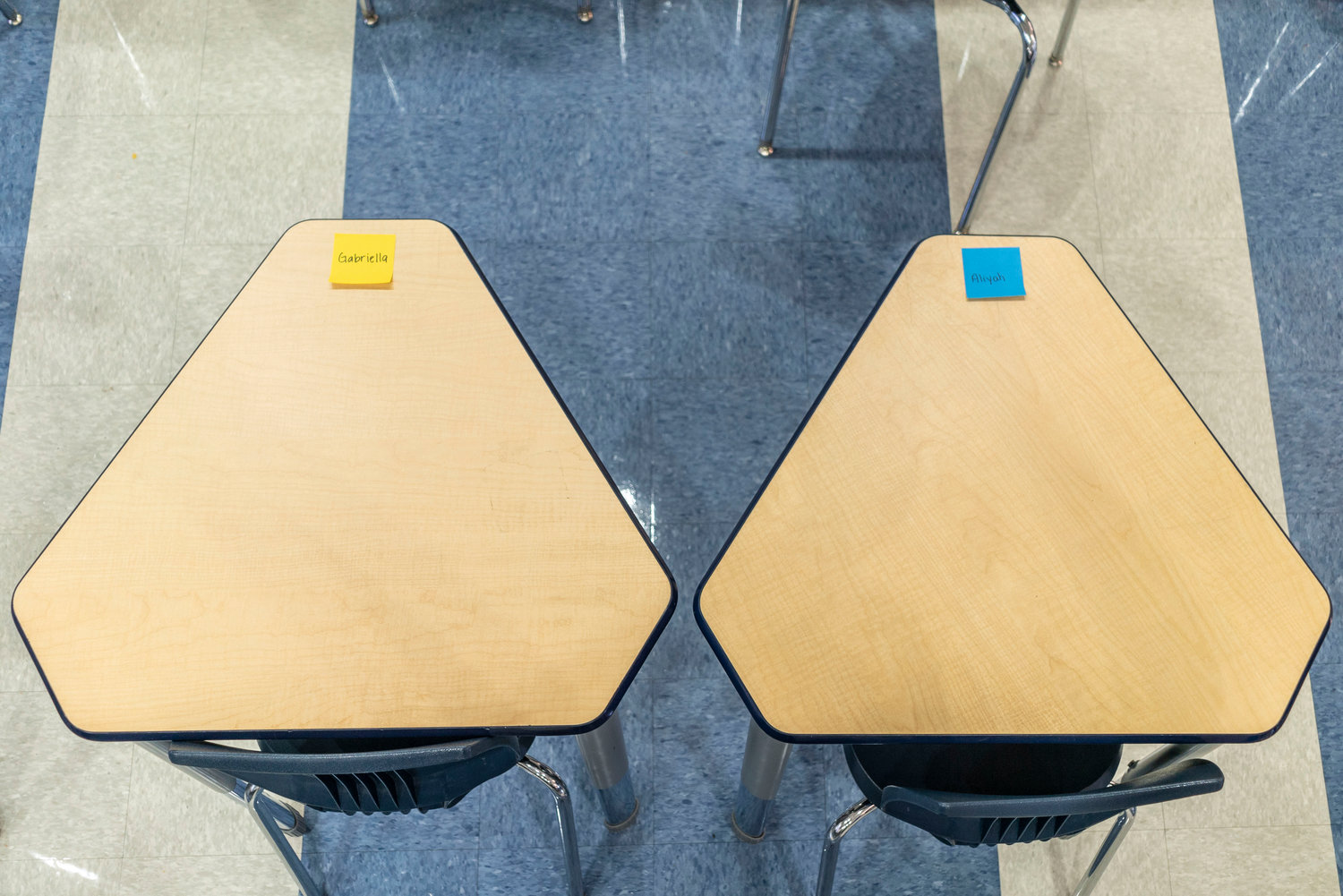 P.S. 24 Spuyten Duyvil was one of some 1,600 schools to reopen its doors last week — a week that began with a vote of no confidence from the principals union against Mayor Bill de Blasio and schools chancellor Richard Carranza. It ended with some 100 schools in Brooklyn and Queens shutting their doors due to growing coronavirus concerns in the area.
HIRAM ALEJANDRO DURÁN 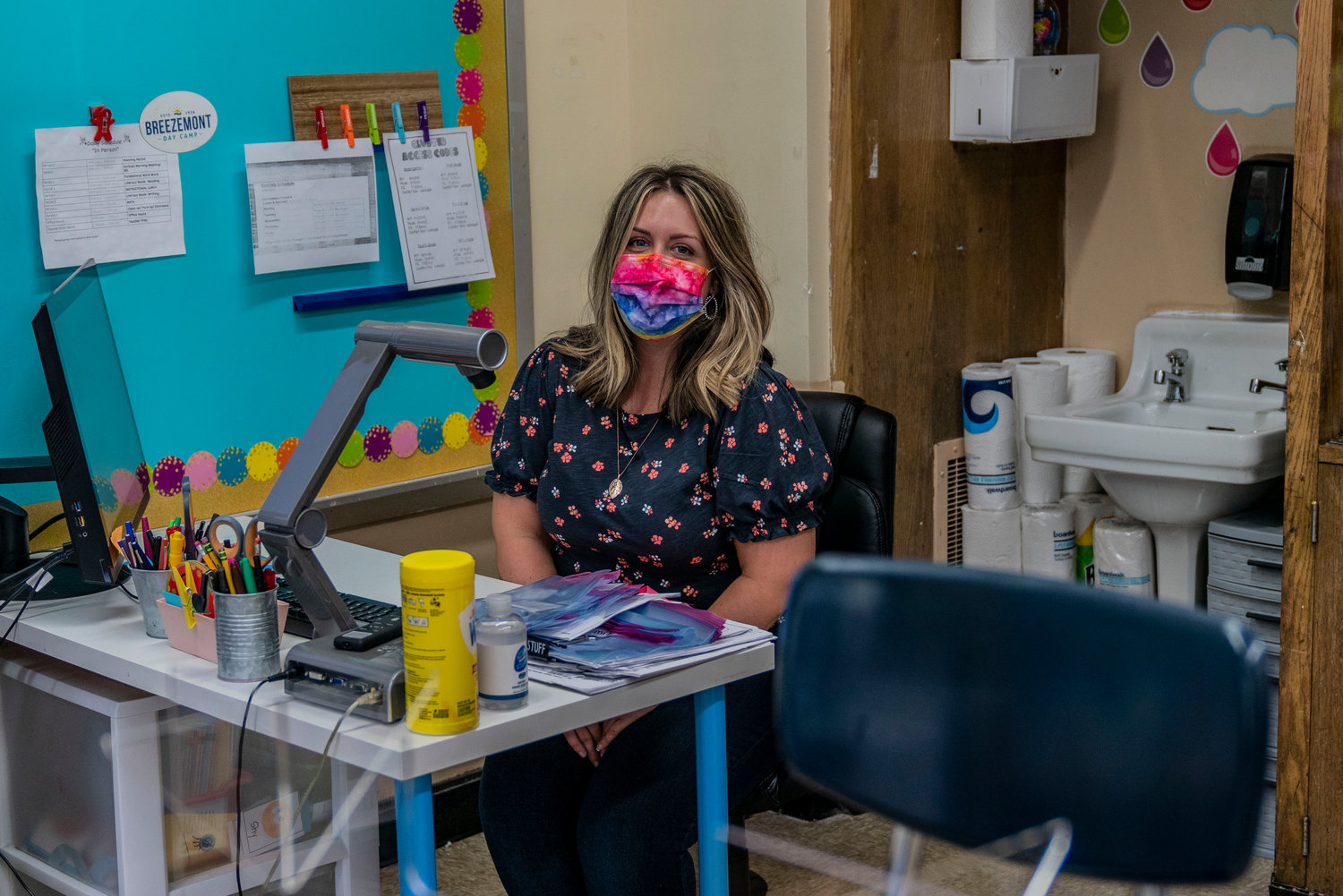 Aleashia Castello’s classroom at P.S. 24 Spuyten Duyvil will only accommodate a fraction of her class at a time this academic year. And the city’s education department is in crisis, facing both a unanimous vote of no confidence from the city’s principals union and impending school closures in coronavirus ‘hotspots’ in Brooklyn and Queens.
HIRAM ALEJANDRO DURÁN 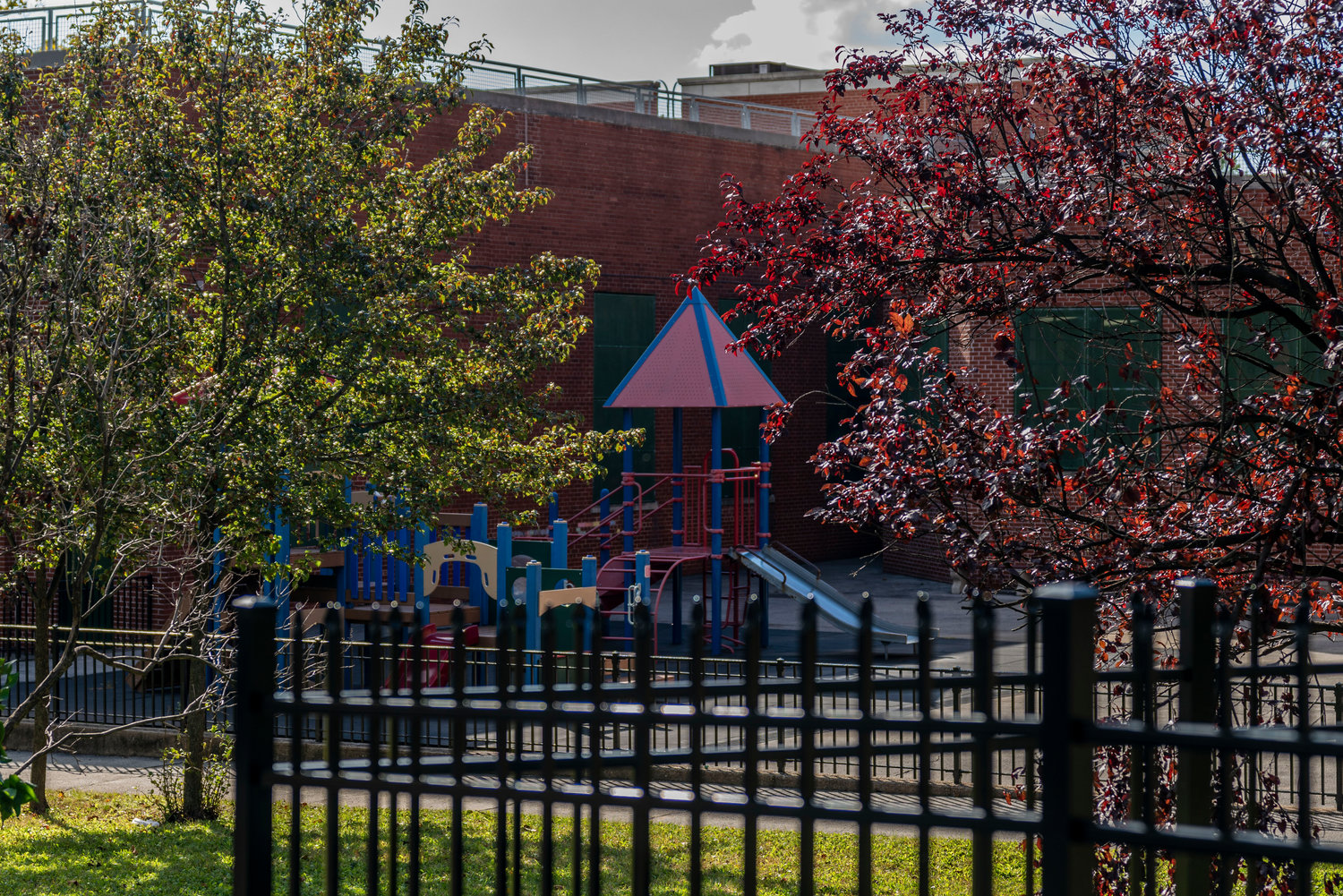 The playground at P.S. 24 Spuyten Duyvil will likely look a bit different this year, with mask wearing and social distancing strictly enforced. And while schools in this part of the Bronx are largely devoid of issues for the time being, daily coronavirus test rates are seeing an uptick in some parts of Brooklyn and Queens.
HIRAM ALEJANDRO DURÁN 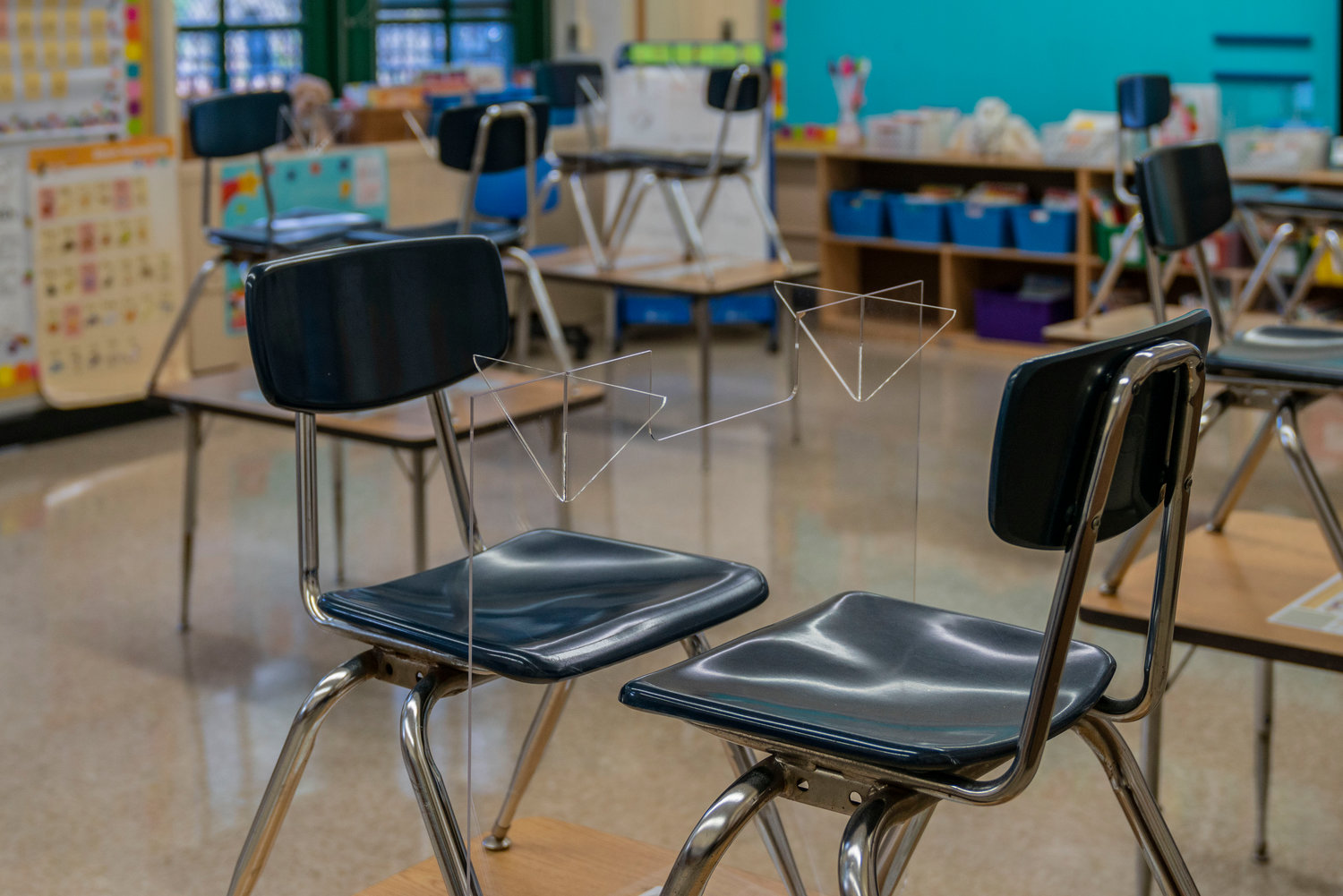 Kindergarten classrooms like this one at P.S. 24 Spuyten Duyvil reopened just last week for in-person classes. But in some areas of Brooklyn and Queens, classrooms closed again as coronavirus positivity rates in those areas spiked.
HIRAM ALEJANDRO DURÁN 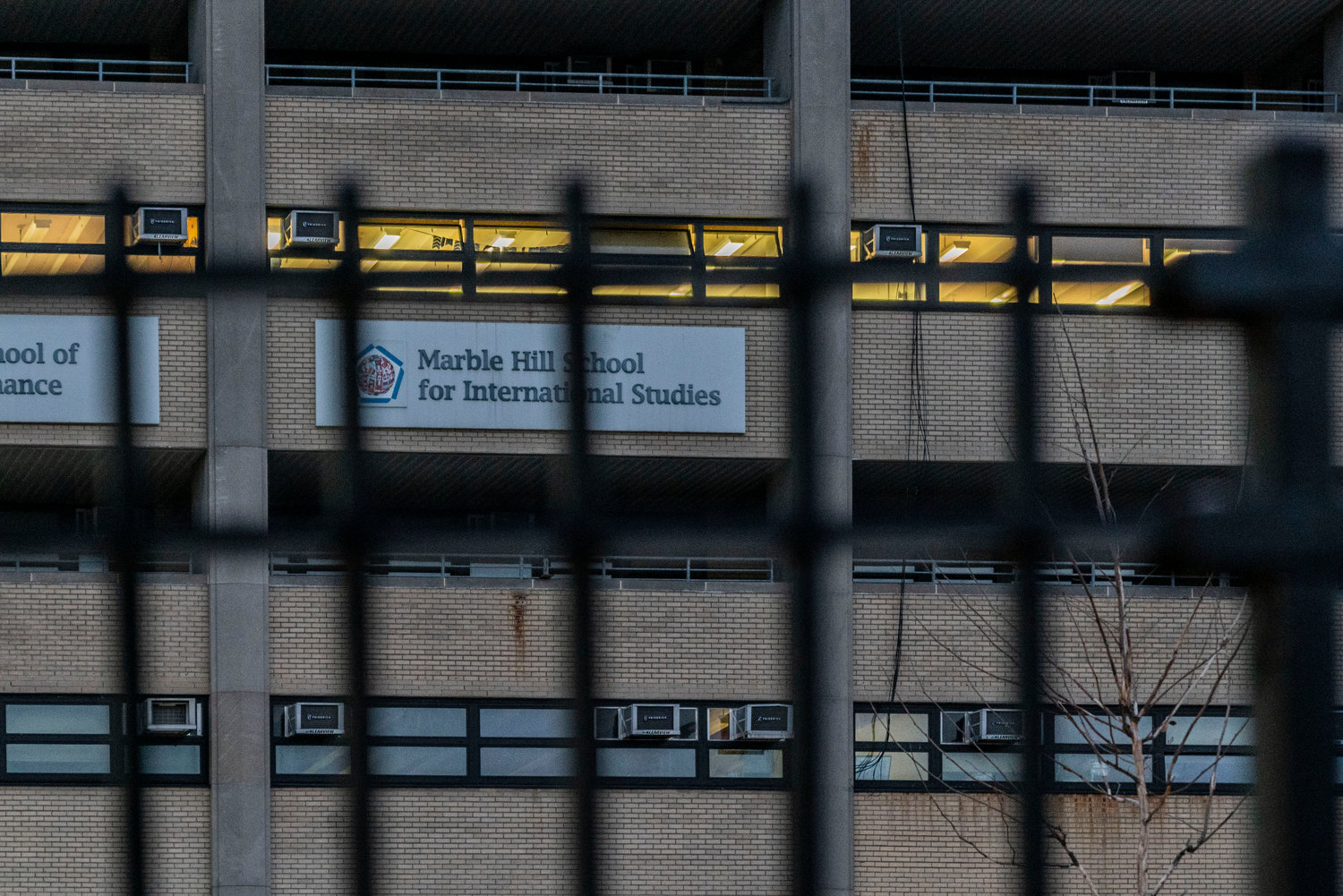 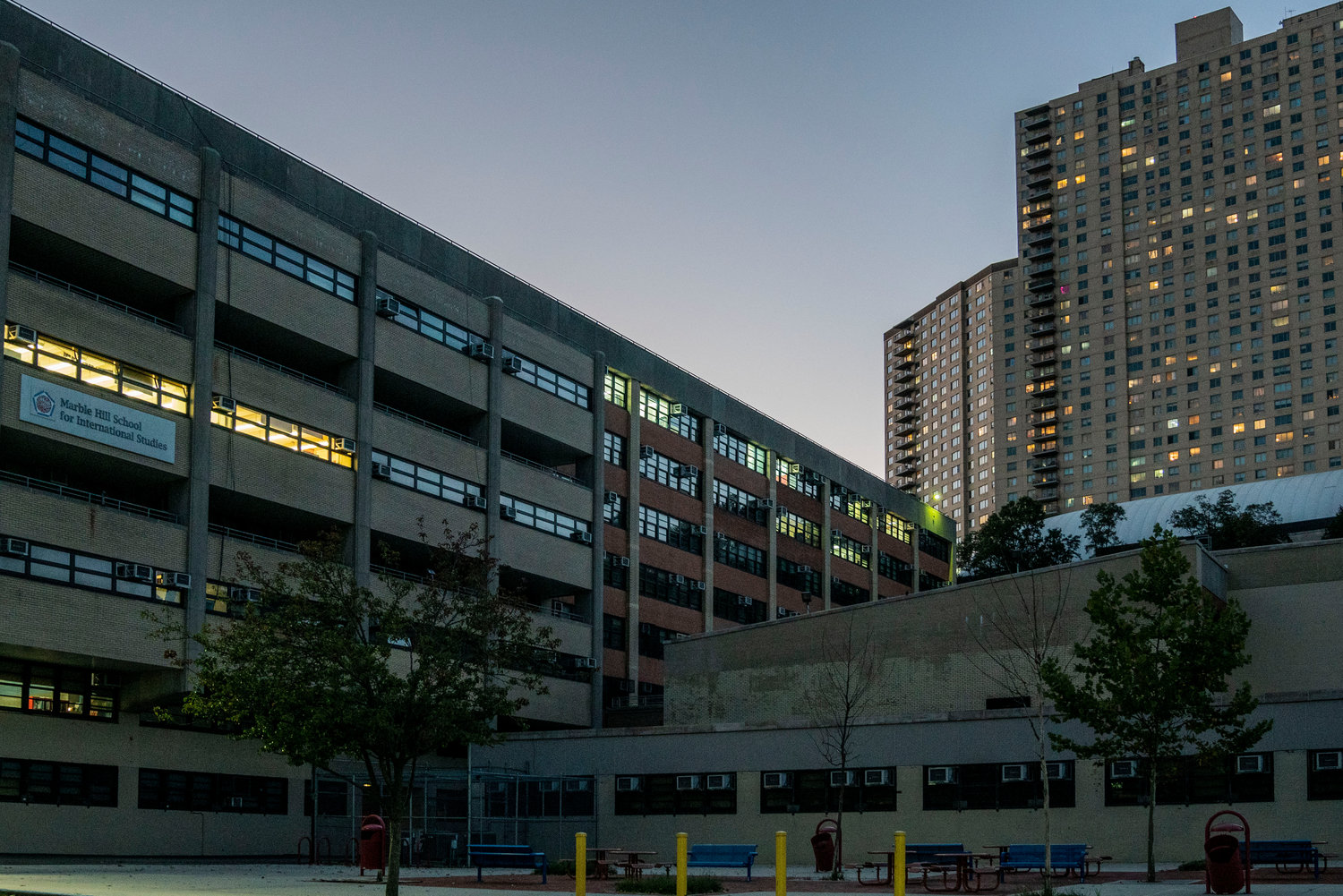 The Marble Hill School of International Studies was part of the last chapter of the city’s ‘phased-in’ reopening plan. And while it’s staying open for the time being, the same can’t be said for its counterparts in select areas of Brooklyn and Queens, which closed Tuesday after coronavirus positivity rates spiked there.
HIRAM ALEJANDRO DURÁN 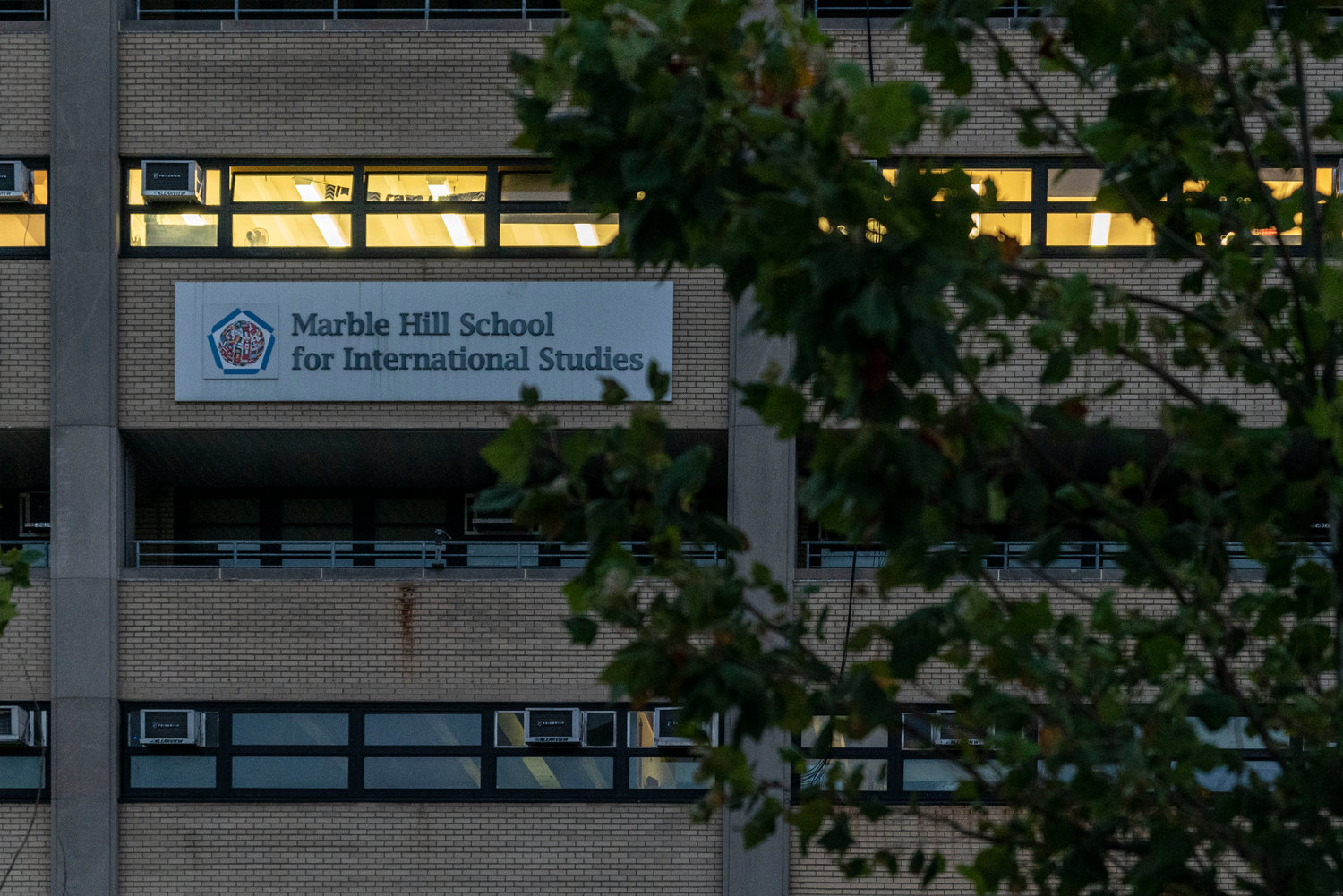 Part of the Council of School Supervisors and Administrators’ vote of no confidence against Mayor Bill de Blasio and schools chancellor Richard Carranza included a call for the two men to cede control of the city’s education department to the state. But Marble Hill School of International Studies principal Kirsten Larson isn’t sure that’s the answer.
HIRAM ALEJANDRO DURÁN
Previous Next
By ROSE BRENNAN

One week can make all the difference when it comes to education policy in the city — especially during a public health crisis.

Last week marked the reopening of the rest of some 1,600 public school buildings across the city. And though Mayor Bill de Blasio called it an “absolutely amazing moment,” not everyone agreed with him.

The week didn’t get off to a strong start. In fact, it kicked off Sept. 27 with a unanimous vote of no confidence in de Blasio and schools chancellor Richard Carranza from the executive board of the Council of School Supervisors and Administrators — the city’s labor union for school principals.

And while that vote would normally be a setback on its own, it didn’t end there. The executive board also called for de Blasio and Carranza to cede control of the city’s public school system to the state education department.

The no confidence vote spared no one’s feelings, least of all de Blasio and Carranza’s. The CSA blamed the two for “late, inadequate and inconsistent guidance throughout the pandemic” and “fail(ing) to equip superintendents and executive superintendents with information necessary to consistently provide school leaders with the support and information they require.”

And the CSA wasn’t the only entity with low opinions of the mayor and chancellor. City public advocate Jumaane Williams also didn’t fully trust public schools could reopen safely. At a Sept. 28 news conference, Williams cited the no confidence vote, noting the similarities between how the union felt about de Blasio and Carranza and what he’d heard from other groups impacted by reopening. As a result, he didn’t think reopening the following day was the right call to make.

Teachers, principals and students from across the city also shared their negative experiences with the reopening process. Williams thinks a lot of the upheaval could’ve been avoided if more resources were channeled into remote learning.

“We are still taking risks that we don’t have to take, and spending money that we simply do not have,” Williams said. “If we had put all of this money (and) all of this energy to make sure we could have the best remote program we could have, we’d be in a much better place.”

Kirsten Larson, principal of the Marble Hill School for International Studies, believes the CSA’s no confidence vote speaks for itself. But while the unanimous vote might communicate how many school administrators feel about the current city-level education leadership, Larson is hesitant to say whether shifting control over to the state education department is the best move to make to address the issues.

“We need to think about the kids, number one, and not about politics,” she said. “Making another big change — and who knows what that’s going to mean — I don’t know that that’s necessarily the answer.”

Nevertheless, despite opposition, reopening proceeded and most public school students returned back to their classrooms throughout the week of Sept. 28. But for students in certain areas of Brooklyn and Queens, that ended nearly as soon as it started.

Cuomo followed through the next day, shutting down those select schools Oct. 6. In an unrelated move, Horace Mann School pushed its middle and upper levels back home for a couple weeks after “multiple” positive coronavirus tests were reported at its West 246th Street campus.

Teacher-turned-politician Eric Dinowitz has long been dissatisfied with the city’s response to school reopening during the pandemic. He found de Blasio’s initial decision to close schools Wednesday as not only frustrating, but dangerous.

“If the uptick in cases is a big enough deal to close schools and businesses, they should have been closed” Monday, Dinowitz said. “Essentially, the mayor is asking families and educators to enter unsafe environments for two extra days.”

The nine problem ZIP codes are concentrated in Brooklyn and Queens — primarily in southern Brooklyn, Far Rockaway and Kew Gardens. The positive test rates of each of the ZIP codes remained at or above 3 percent for a full week. As a result, de Blasio recommended non-essential businesses in those areas should lock down, and schools, as well — both public and private.

But he was quick to dispel rumors that reopening schools for in-person classes was the reason for the recent uptick in coronavirus cases.

“We have seen very little coronavirus activity in our schools,” de Blasio said Oct. 4. “This is not because we have seen a number of specific problems in … our public schools. We have not. This is out of (an) abundance of caution.”

Both de Blasio and Cuomo plan to enforce masking and social distancing measures more strictly in these problem areas to ensure other neighborhoods in the city don’t see similar spikes in cases.

Dinowitz says the behavior he’s observed in the area is encouraging, and that people have each other’s safety in mind — although that might not be the case for the city’s leadership.

“I think what we understand in the northwest Bronx is that safety needs to come first,” he said. “These extra two days that the mayor (gave) schools for whatever reason does not indicate a ‘safety first’ mentality.”