Construction could be the neighborhood’s middle name 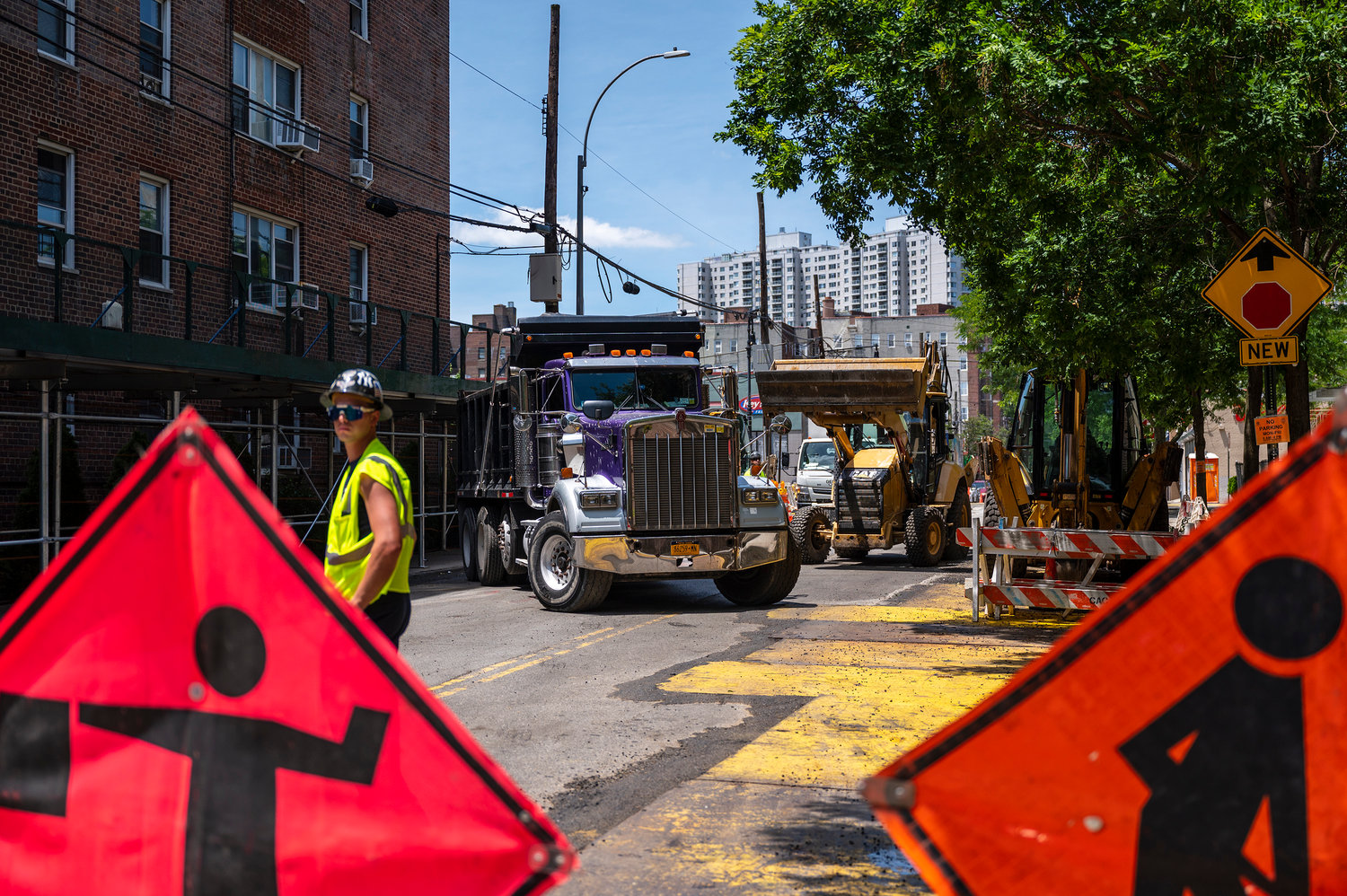 Oxford Avenue and West 235th Street is in the midst of construction for the past six weeks. The environmental protection department and Con Edison are fixing infrastructure.
HIRAM ALEJANDRO DURÁN
By Stacy Driks

It seems like everywhere you go in greater Riverdale, you can’t avoid a construction site.

Construction can be a headache wherever you live. Most people understand sewage and gas lines need to be replaced eventually. But how much can residents take?

“There seems to be a lot of different types of projects going on,” said Dale Wolff, a North Riverdale resident.

She wants to know  why this is happening all at once? There are no clear immediate answers to give residents. Sometimes when a project starts,  a complication arises for another agency and a little project becomes a bureaucracy.

Each agency that plans on working on New York City property normally puts in a request for their reason and purpose to begin when they file for a permit. After the transaction is approved, then all the work begins.

The DOT has been approving multiple permits in various locations at close proximities. Unfortunately, in this case the DOT could not be reached for comment.

In lower Riverdale on West 235th Street, Key Food supermarket store manager Vinny Gomez claims the construction in front of the store is an ongoing mess.

For his employees and customers, they expected it to be a minor construction repair. However, construction workers from C.A.C. Industries were digging holes — for weeks. The streets were almost impassable.

“Many customers are complaining, and we don’t know what to tell them,” Gomez said.

Customers need to drive around 235th Street, which is inconvenient, to enter the store’s parking lot on Oxford Avenue. But when they come in from West 235th and West 232nd streets, they are blocked.

The environmental protection department began fixing infrastructure on West 235th and Oxford Avenue for a sewage problem during the first week of May. Massive pipes were being replaced.

Con Edison stepped in for a gas repair May 29. The energy utility said it will be on the long stretch of Oxford Avenue until the end of July.

The work is due to a gas main repair. This main, which is a large pipe for gas distribution, provides household gas beneath the streets of the greater Riverdale.

ConEd did not confirm if there was an interference with their pipe. But the permit states the construction is due to encroachments.

The issue can be tied to third-party activity that affects the company’s ability to safely operate and continue with its operation.

Residents were in the same circumstance in late March, when ConEd pipes interfered with a DEP sewage project.. The residents of Greystone Manor near West 242nd Street were stuck searching for parking as their entire block and its surroundings was a big construction site.

Meanwhile on West 235th Street, Key Food workers have to search for parking since they are not allowed to use the parking lot. It takes more time to find a spot to begin their shift.

“We live in a city where that was put together a long time ago, and obviously, certain things are going to have to be replaced,” Gomez said. “Unfortunately, it’s in the front of our store and surrounding of our store.”

Driving on the streets isn’t the only significant concern for residents. Once construction workers go home for the day, local drivers can finally park their cars on the once busy street.

In addition to the obstruction caused by the construction work, debris is left in the streets.  On the corner of West 235th, across the street from Key Food, there is a damaged cardboard box barely tied together with string containing dozens of fiberglass tubes labeled “bridge drain system.”

ConEd did not confirm with The Riverdale Press if this equipment belonged to them. DEP certainly believes the products do not belong to them.

C.A.C., a heavy civil contractor specializing in sewer, water main and roadway construction, has a permit valid through the end of the month that allows them to place equipment on West 235th. If this small bridge drain system parts belong to them, technically, it is permitted.

Yet, the work and its mess continue.

“They never put an adequate timeframe on the signs outside,” Gomez said. “Even so, they’ll just extend the project.”

Extending the project is not exactly something the neighborhood is excited about especially since there are loud bangs from outside. Even those in the noisy supermarket hear it.

“When they drop the big plate, it can be a little startling,” Gomez said about the installation of steel plates on the street to cover up the holes from the day’s construction so cars can drive on the roadway. “You think the worse of course but it’s noisy.”

There are residential buildings nearby and the sound can be bothersome for people working from home.

ConEd’s open street permit is up until July 27, but there are no signs posted near the site and the public is not aware of what is going on.

Similar instances happened on Greystone Avenue and West 242nd, where two agencies were working together, and not even the Assemblyman Jeffrey Dinowitz could understand what was happening due to a lack of communication with ConEd.

Ironically, Key Food can’t run away from the construction because on Riverdale Avenue and West 258th street, ConEd is in the middle of a major gas line repair.

However, by the end of June, the agency will complete its work, according to its permit.