Construction more than a bump in the night 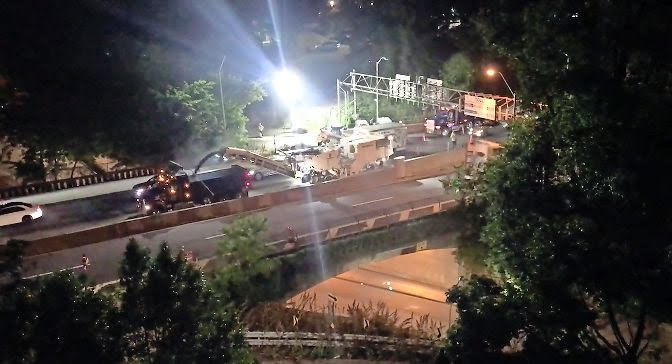 Trucks backing up on the Henry Hudson parkway are the main source of the noise keeping residents up, according to those very same residents. Community Board 8 officials say they hope to open the lines of communication between these residents and the state agency responsible for work on the area near the Henry Hudson Bridge: the Metropolitan Transportation Authority.
Courtesy of David Handschuh 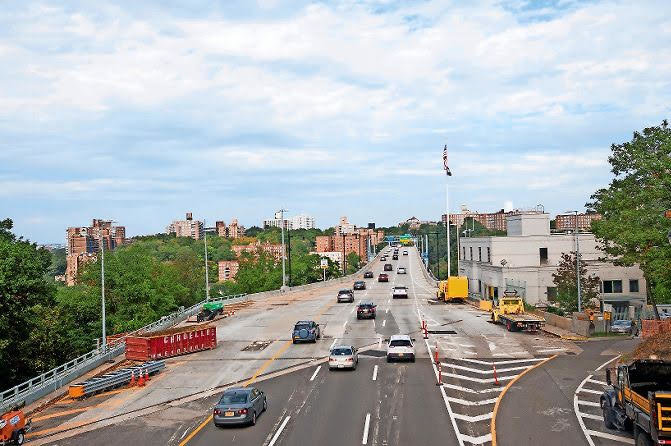 Residents would prefer if construction being done on the Henry Hudson bridge would happen during the day, like a lot of it was in the beginning of 2017. Unfortunately, the work was kept some residents up into the late hours of night, keeping the complaint lines at 311 busy.
JULIUS CONSTANTINE MOTAL / File
Previous Next
By CHEYENNE UBIERA

Summer nights haven’t been peaceful for some of the residents of 2601 Henry Hudson Parkway.

No, it’s not leftover fireworks from Fourth of July. Instead, it’s construction crews ripping up old asphalt along the busy parkway into the wee hours of the night — keeping many awake with loud noises and bright floodlights ruining bedtime.

Numerous complaints have been made to 311, and the Metropolitan Transportation Authority — which oversees the work — hasn’t offered much of a reply. The lack of communication has increased tensions among neighbors who seek some kind of relief.

Even visitors are getting tired of the commotion. Rather than working from his home in New Jersey, David Handschuh has been staying with a friend in Spuyten Duyvil. The noise, he said, has led to countless sleepless nights, with the main culprits the constant beeping of trucks backing up. The sounds are so loud that Handschuh says it can even wake him from a deep sleep.

“Sometimes I think, ‘Is that my alarm?’” Handschuh said. “Then I realize that it’s just another truck on the Henry Hudson Parkway.”

He says neighbors in the building are just as fed up as he is. And the worst part? It doesn’t have to be this way.

Late-night construction means less traffic and cooler summertime temperatures. However, the coronavirus pandemic has led to some of the lowest traffic levels in American history, and New York City traffic isn’t any different. Because of that, Handschuh believes a lot of that work can be moved to the daytime, when people are at work, or at least awake.

Typically, commercial and highway construction is allowed in the cities on weekdays between 7 a.m. and 6 p.m.. Work can occur after hours and on the weekends if it is emergency work that is necessary for public safety and cannot be completed during normal hours.

But Handschuh says this isn’t an emergency.

“Fixing up severe potholes is an emergency, but putting down a new roadway is scheduled,” Handschuh said. “The MTA can schedule during the day without any negative side effects.”

Handschuh filed a complaint June 17, just before 2 a.m. He was referred to the city’s environmental protection department, which was supposed to contact him within 10 days if “any other information” was needed. It’s been nearly a month, and Handschuh says he hasn’t received a word from anyone.

Councilman Andrew Cohen’s office redirected Handschuh to reach out to Assemblyman Jeffrey Dinowitz and state Sen. Alessandra Biaggi. Both of those ventures have yet to yield what Handschuh believes is an adequate response.

Meredith Daniels, a spokeswoman for the MTA, says any complaints received in regards to the construction were received and addressed in a timely manner. Work can’t move to the day, because as the city progresses deeper into an economic reopening in the wake of the coronavirus pandemic, daytime traffic is on the rise.

Kathy Fennessy, who lives in the same building where Handschuh is staying, has become frustrated as well. Like Handschuh, she has made calls to complain, but nobody has called back. It’s gotten to the point where she doesn’t know who to turn to anymore.

Many of her neighbors don’t even know why the construction is happening so late at night, and the building managers can’t give her answers either.

“It’s hard to get your questions answered when people aren’t calling you back.” Fennessy said.

Her sleep has also been affected and, again, it’s the beep-beep-beep of the trucks that are the biggest problem. Even with her windows closed and air conditioners on, Fennessy can still hear the trucks.

The construction isn’t the problem. It’s the question of when the noise is finally going to end.

Dan Padernacht, chair of Community Board 8’s traffic and transportation committee is leading the charge to get some answers. Although Daniels says the MTA has shared news and updates about the work with the community board, Padernacht says even he has yet to find many of those answers.

Still, he says the community board is the best place to start.

“If you want to get to the MTA,” Padernacht said, “we’re going to help you do that.”