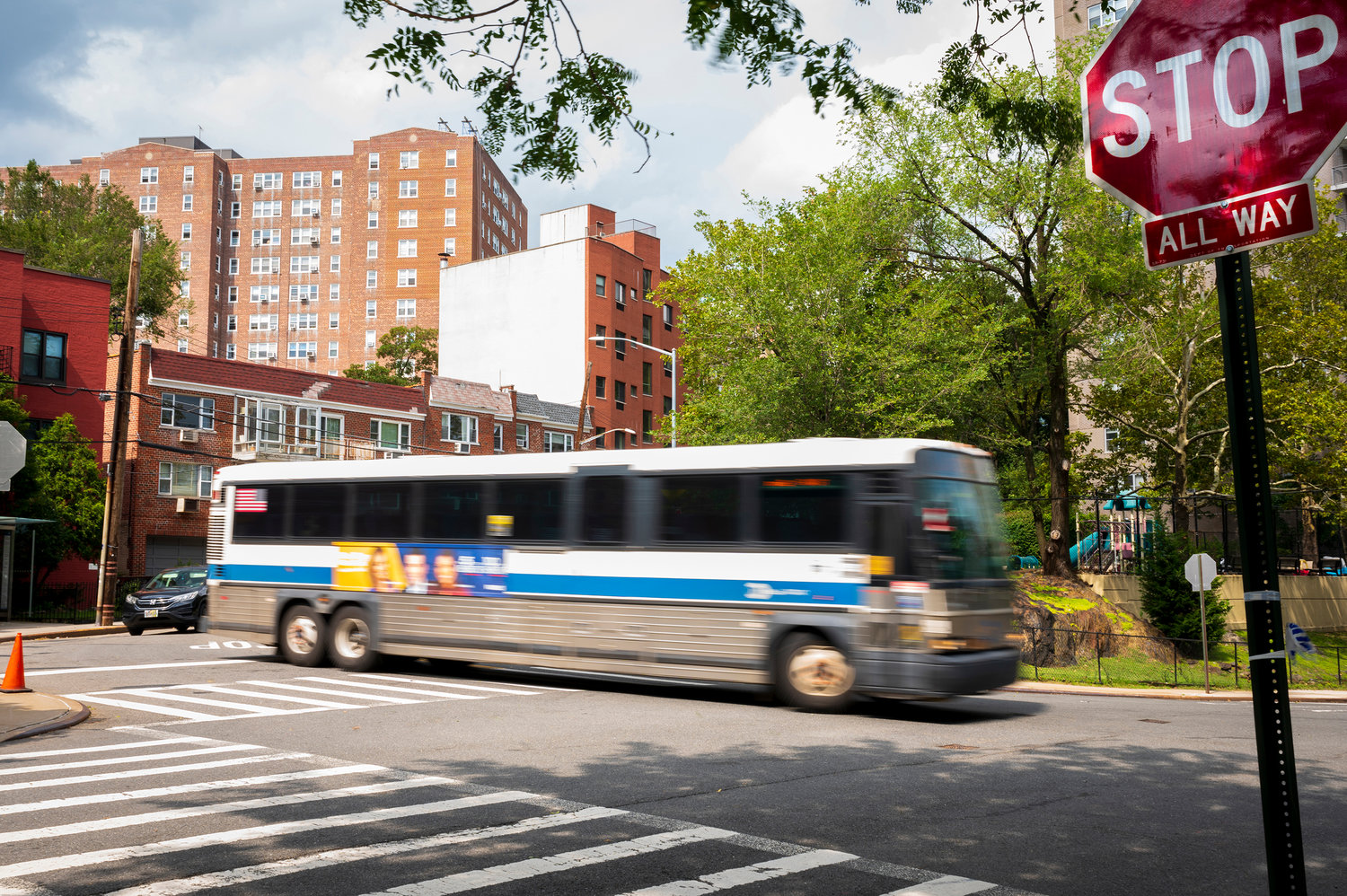 An MTA express bus shoots around the corner at the intersection of Kappock Street and Johnson Avenue, the Spuyten Duyvil intersection where political activist Ruth Mullen was killed last September. Lawmakers have since pushed for the city’s transportation department to install a traffic light, and make other safety improvements there.
Hiram Alejandro DurÃ¡n 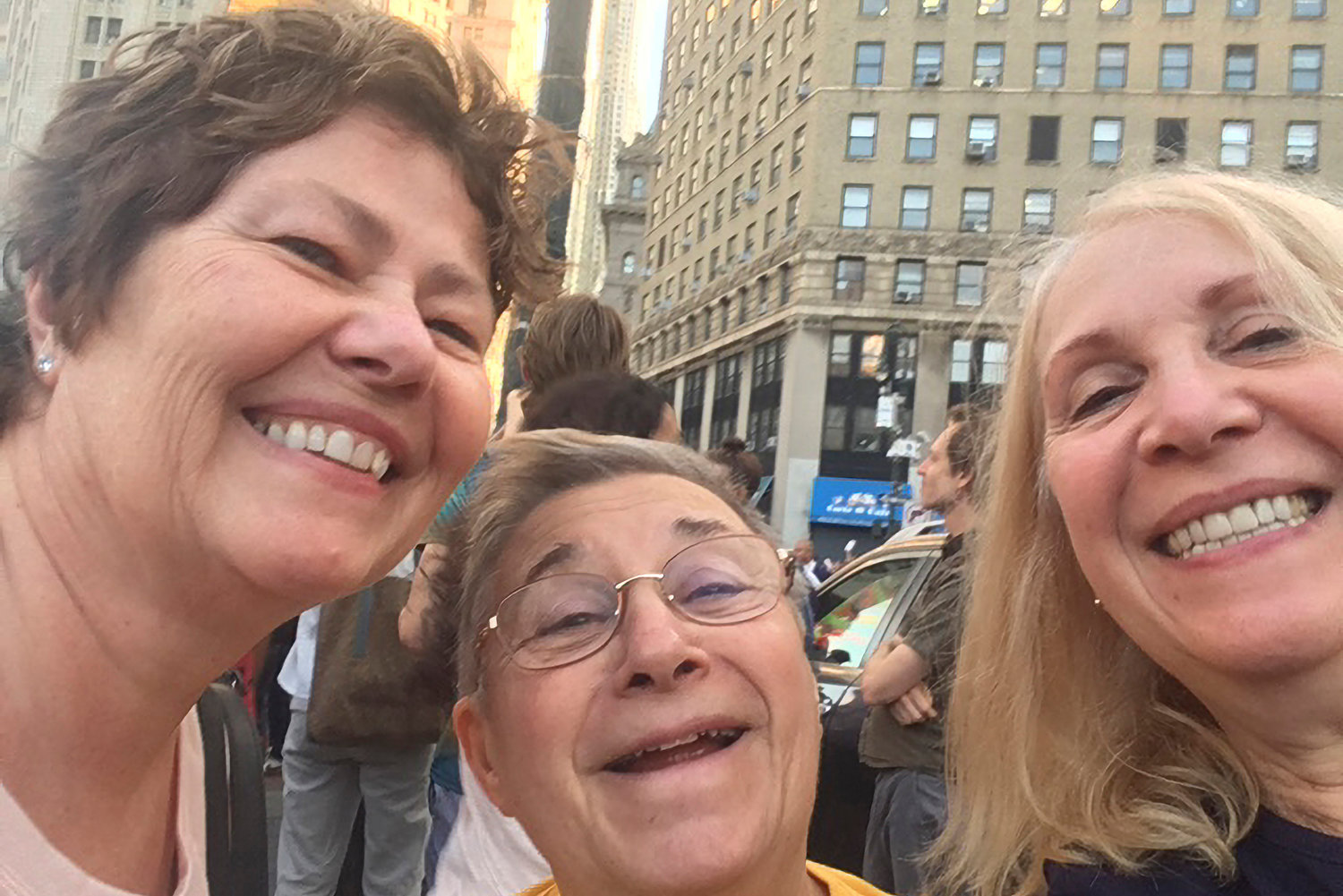 Ruth Mullen — who was killed last September when crossing Johnson Avenue near Kappock Street — was active with the political social group, Riverdale Huddle, since renamed in her memory. Friend Elizabeth Cooke-Levy said Ruth often prodded her fellow huddlers to move from conversation to action.
Courtesy of Judith Minkoff-Grey 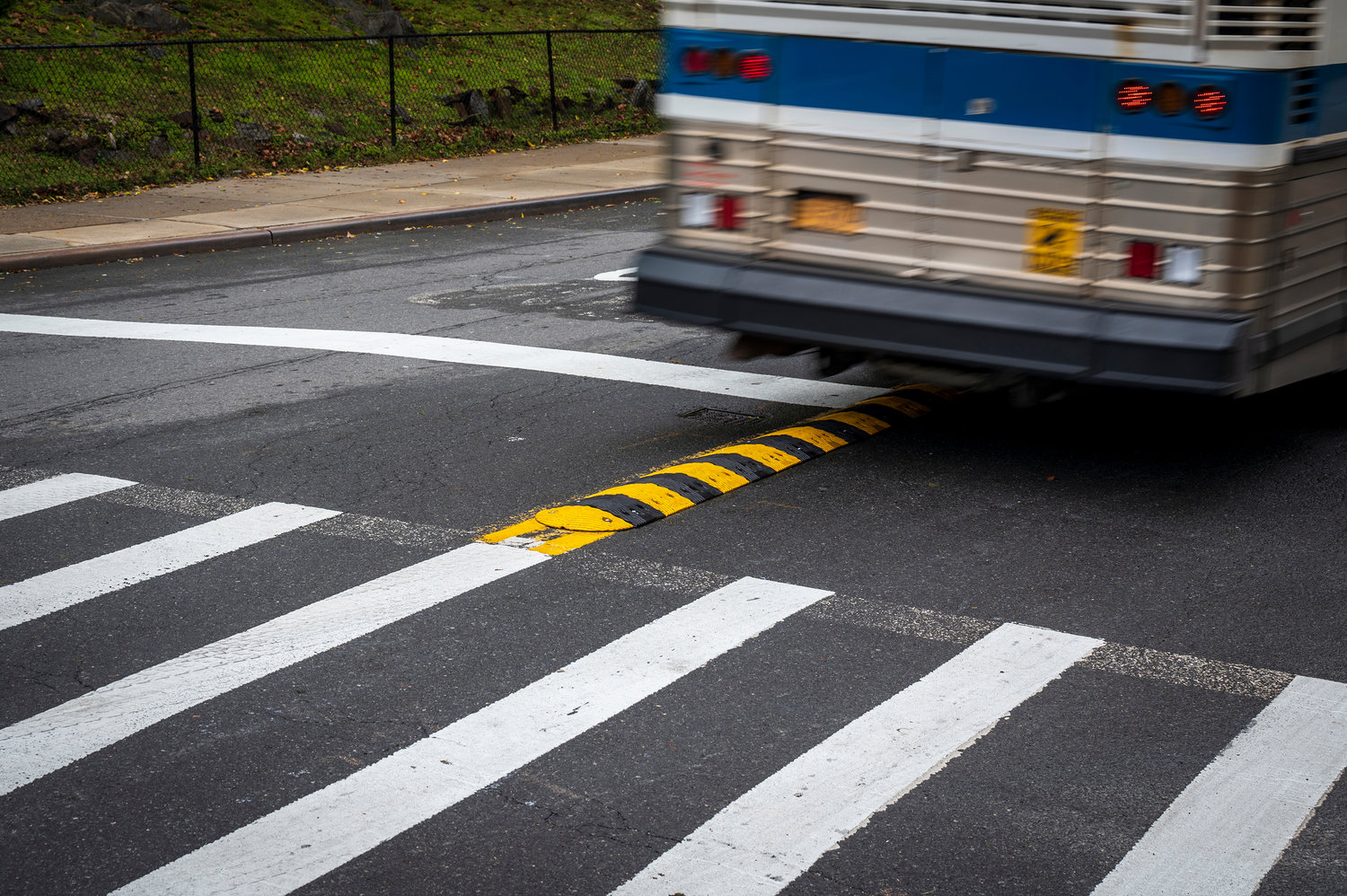 An MTA express bus shoots around the corner at the intersection of Kappock Street and Johnson Avenue, the Spuyten Duyvil intersection where political activist Ruth Mullen was killed last September. Lawmakers have since pushed for the city’s transportation department to install a traffic light, and make other safety improvements there.
Hiram Alejandro Durán
Previous Next
By SACHI McCLENDON

The driver whose bus struck and killed political activist Ruth Mullen in Spuyten Duyvil last September did not come to a full stop at a stop sign prior to the accident.

At least that’s what prosecutors say video surveillance footage reveals in the criminal case against Dwayne Campbell. He’s been charged with a misdemeanor for failing to yield among other offenses — crimes that could carry jail time.

Campbell was turning his BxM1 bus left onto Johnson Avenue from Kappock Street the evening of Sept. 7 when he ignored the stop sign there, according to a criminal complaint shared with The Riverdale Press by the Bronx district attorney’s office. That’s when the bus hit Mullen, continuing to make its turn until another passerby flagged him down.

Mullen had been crossing Kappock, a short distance away from the building where she and her husband Jim made their home. Mullen, 68, died at the scene.

Campbell's arrest on the misdemeanor charge of failing to yield to pedestrians with the right of way was made after a 2014 city law that criminalized such an action.

Campbell was charged with not only failure to yield to a pedestrian with the right of way, but also failure to stop at a stop sign and failure to use due care. If convicted of not yielding to a pedestrian, Campbell could face a $250 fine, up to 30 days in jail, according to city code.

Police say Campbell tried to explain to them what happened on the scene,

“I’m the driver,” Campbell told New York Police Department officers from the 50th Precinct, according to the report. “I missed the stop. The passenger told me to not stop at this stop, but to go to the next one. That’s why I kept going.”

Mullen’s death created a large outpouring of support for Jim and their daughters, Lia and Maya. Many — including lawmakers like Councilman Eric Dinowitz — pushed to install a traffic light on Kappock and Johnson, something Mullen had fought to get for years.

“We won’t rest until the facts and cause are determined,” Cipriano said. “And we are fully cooperating with the NYPD investigation.”

Mullen had made a name for herself locally after the election of Donald Trump in 2016 thanks to her strong political activism. She not only volunteered as a poll worker, but she also campaigned for underdog politicians, like Alessandra Biaggi who unseated Jeffrey Klein from his state senate seat in 2018.

Mullen also was a member of the Riverdale Huddle, a local political group known for its regular gatherings at local eateries, and for writing letters to the editor featured in The Press.

“Alessandra told me that she wouldn’t have been elected without Ruth,” Jim, Mullen’s husband, told The Press shortly after she died. “When Alessandra was trying to decide whether or not to run, she met with the Huddle. And I remember Ruth getting back that day and saying, ‘She’s the one. She’s the one to do it.’ And she just threw all of her support behind her.”

Police arrested Campbell three months later. A judge released him on his own recognizance as his case makes its way through the Bronx criminal court.

The city council passed a law in 2014 creating criminal penalties for drivers who strike a pedestrian or cyclist in the right of way. Since then, several Metropolitan Transportation Authority bus drivers have been arrested, including one in 2018 who struck and killed an elderly woman as she crossed Bay Parkway in Brooklyn.

The transport workers union fought the legislation, saying it unfairly targeted bus operators who are behind the wheel at much higher rates than the average driver.

The MTA declined to comment on whether Campbell was still employed by the agency or if it was conducting an internal investigation into the matter.

The intersection of Kappock Street and Johnson Avenue is notoriously difficult to navigate, with the two streets intersecting on a steep curve. At least 10 people — including Mullen — have been injured or killed there since 2011, according to city data.

Shortly after Mullen’s death, raised plastic curbs were installed at the intersection. And in January — following years of pressure from transit advocates and community members — the city’s transportation department announced it would install a traffic light there.

“If I just put up one of my cameras there and just did a time-lapse or just recorded every car that goes through there — (there would be) hundreds of violations,” Bradley said.

Campbell is due back in court next week.