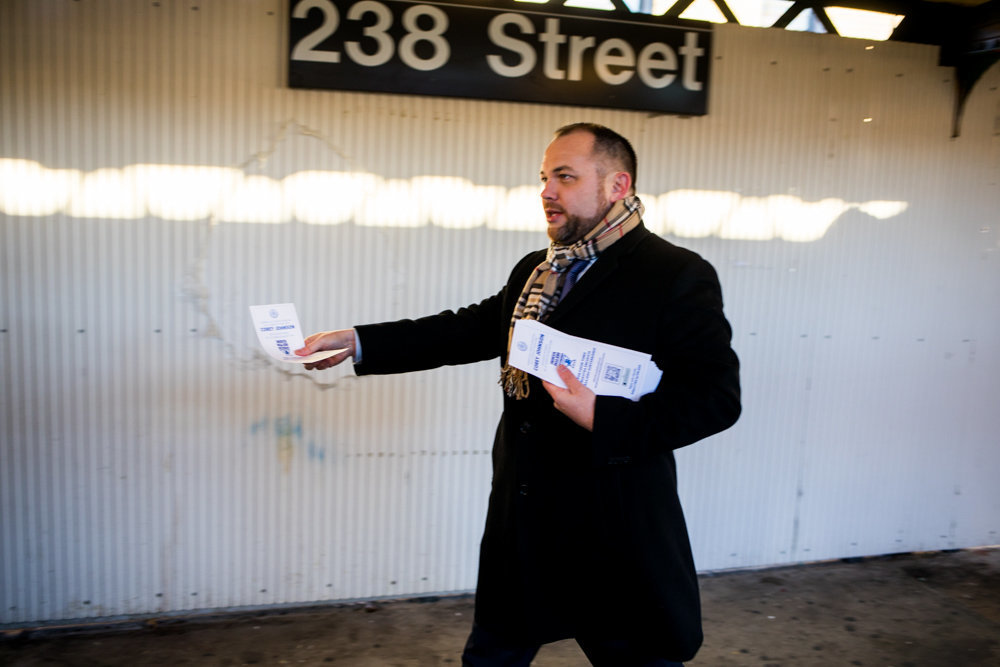 City council Speaker Corey Johnson is proposing a $12 billion relief plan for New York City that would include direct cash disbursements to every resident, expanded unemployment benefits, and loan help for small businesses. However, he will need help from Washington to make it happen.
JULIUS CONSTANTINE MOTAL / File
By MICHAEL HINMAN

With federal and state officials working on various plans to try and bring money into areas like New York City most affected by the coronavirus, city council Speaker Corey Johnson is proposing a plan of his own, with the hopes Washington will be willing to pick up the $12 billion price tag.

Johnson's proposal, according to a release, would include temproary universal basic income for all New Yorkers, temporarily deferreing fees and refunding business taces, and up to $250,000 to cover fixed costs for impacted businesses.

"This is a crisis unlike any we've ever seen," Johnson said, in a release. "However, the tools that have helped us in the past can be utilized again. The difficult steps we've taken to protect ourselves and others are necessary, including social distancing and mandatory closures, but they are devastating our businesses and workers in every corner of the city."

The impacts on the hospitality industry has received the most attention, Johnson said, but the coronavirus pandemic also has affected gyms, performance venues, salons, retail shops, and other types of businesses.

"This plan will provide relief not just for our economy, but also for the small businesses and workers that are the heart and soul of New York City," Johnson said.

The city council believes the virus that causes COVID-19 has hit hardest more than 500,000 workers in more than 40,000 businesses — companies estimated to have generated $40 billion in taxable sales last year.

Even if the federal government comes through and sends out checks between $1,000 and $2,000 for every household, in New York City, that's just not enough, Johnson said. He wants to supplement that money with an additional $550 for each adult, and $275 for each child. So a typical family of four could receive an additional $1,650 on top of anything that might be provided by the federal government.

Because many people are losing their jobs, Johnson also wants to expand unemployment insurance, which he says right now helps less than half the people who aren't working, and provides people with less than half of what they need. Johnson's proposal would exapnd eliglibility to freelancers, gig workers, and those who have simply had hours reduced, but are still holding onto their jobs. It also would boost the benefit cap by 30 percent.

Finally, Johnson wants to cover fixed costs for businesses. That means immediately deferring sales and use taxes in March, as well as the commerical rent tax and business tax. Institute penalty-free deferment of city fee collections and permit reneal fees.

Johnson also wants to build on the city's small business loan program, expanding eligibilty to reach more businesses and increasing the maxmium loan amount to $250,000. He wants these to be stuctured as zero-interest loans, and even with hope that some of the debt would be forgiven if the federal government steps in.

In fact, having support from the Trump administration is a critical component of funding the proposal, Johnson admits. Even with unemployment insurance, the trust fund started with a balance of $2.6 billion this year, but with what the Speaker describes as a massive surge in workers applying for benefits — and fewer businesses paying in — that won't last for long.

But if the federal government doesn't step up, Johnson believes the $12 billion cost can be funded through bonds, citing the city's history using that strategy, especially in the wake of the Sept. 11, 2001, terrorist attacks.

For those bonds to work, the city will need new revenue streams, Johnson said.

"We should ask the wealthiest corporations and people, those who are most able to weather this storm, to chip in a bit more," Johnson said. "That could be in the form of a temporary payroll tax, a surcharge on high-end commercial property, or a small tax increase on personal income over $500,000 a year."

The price tag anticipates such programs would be needed for six months, Johnson said, but he hopes the city will pull through much faster than that.

"Our economy is in crisis and our businesses and wokers are suffering in real time," Councilman Andrew Cohen said in a statement Thursday evening to The Riverdale Press. "It's our obligation to every New Yorker to be proactive about planning for long-term recovery.

"We'll continue to work to refine the specifics, but this proposal is a step in the right direction to tackle the massive challenge of revitalizing our city after this crisis has passed."