Coronavirus not enough to stop this campaign 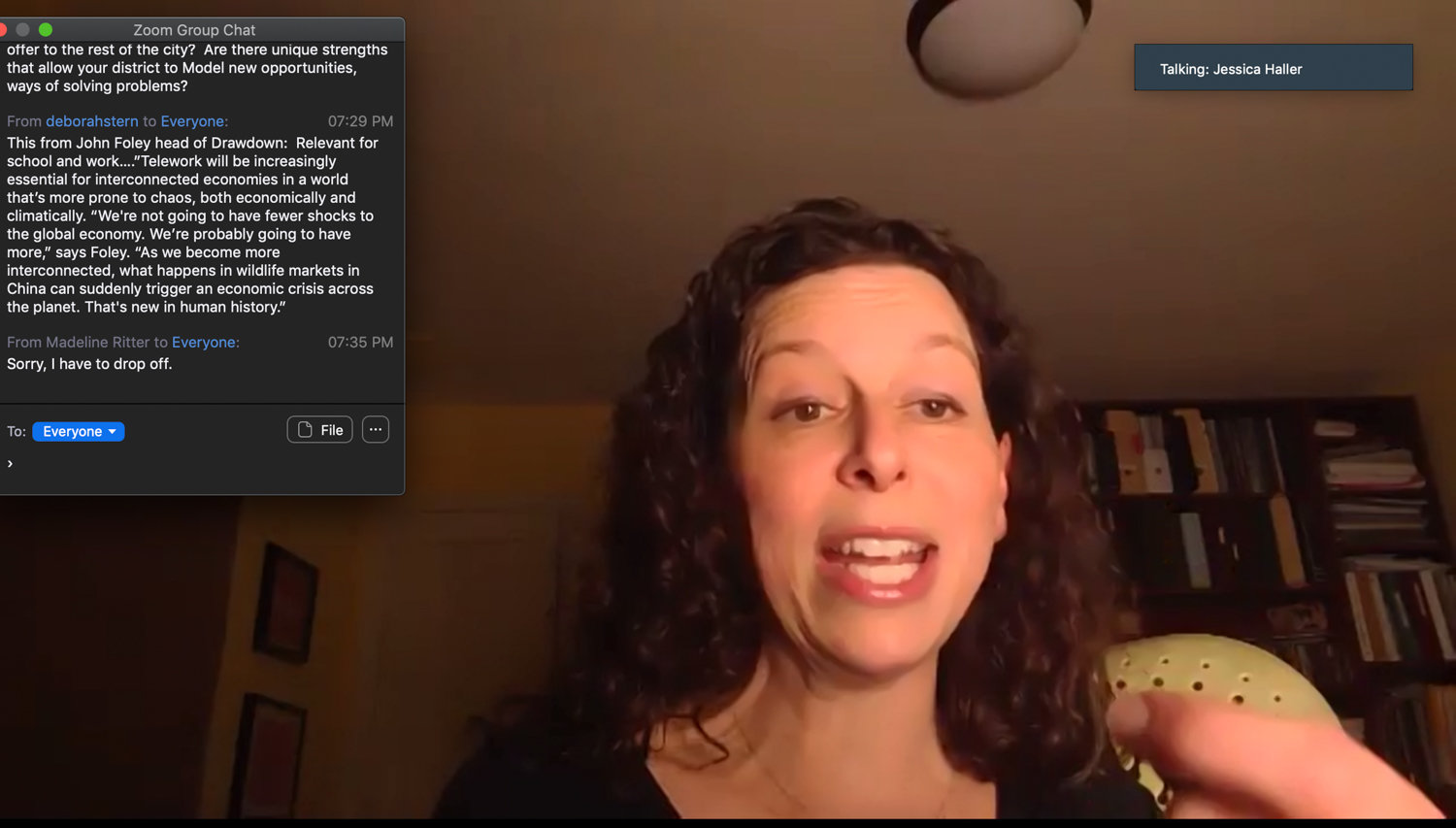 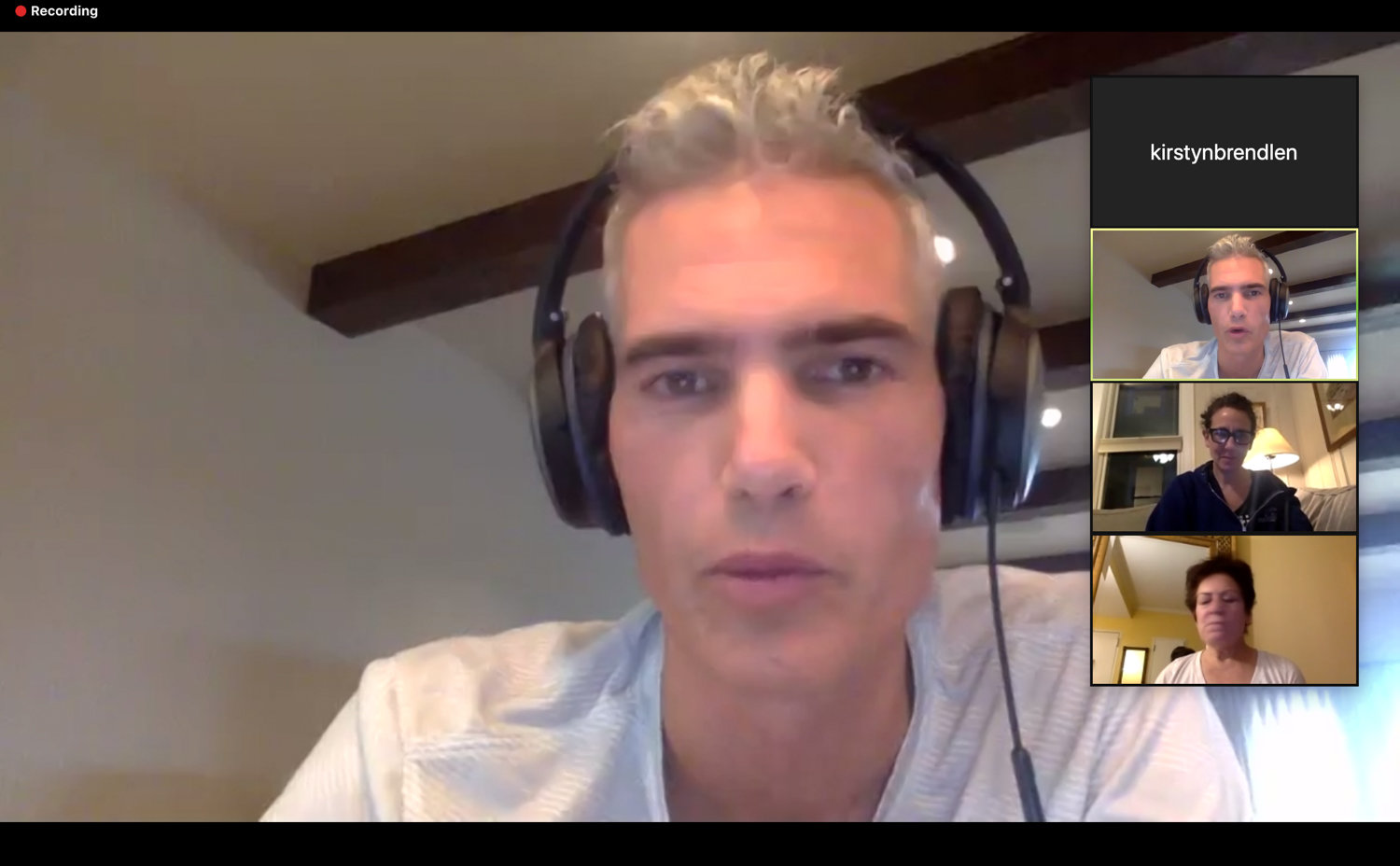 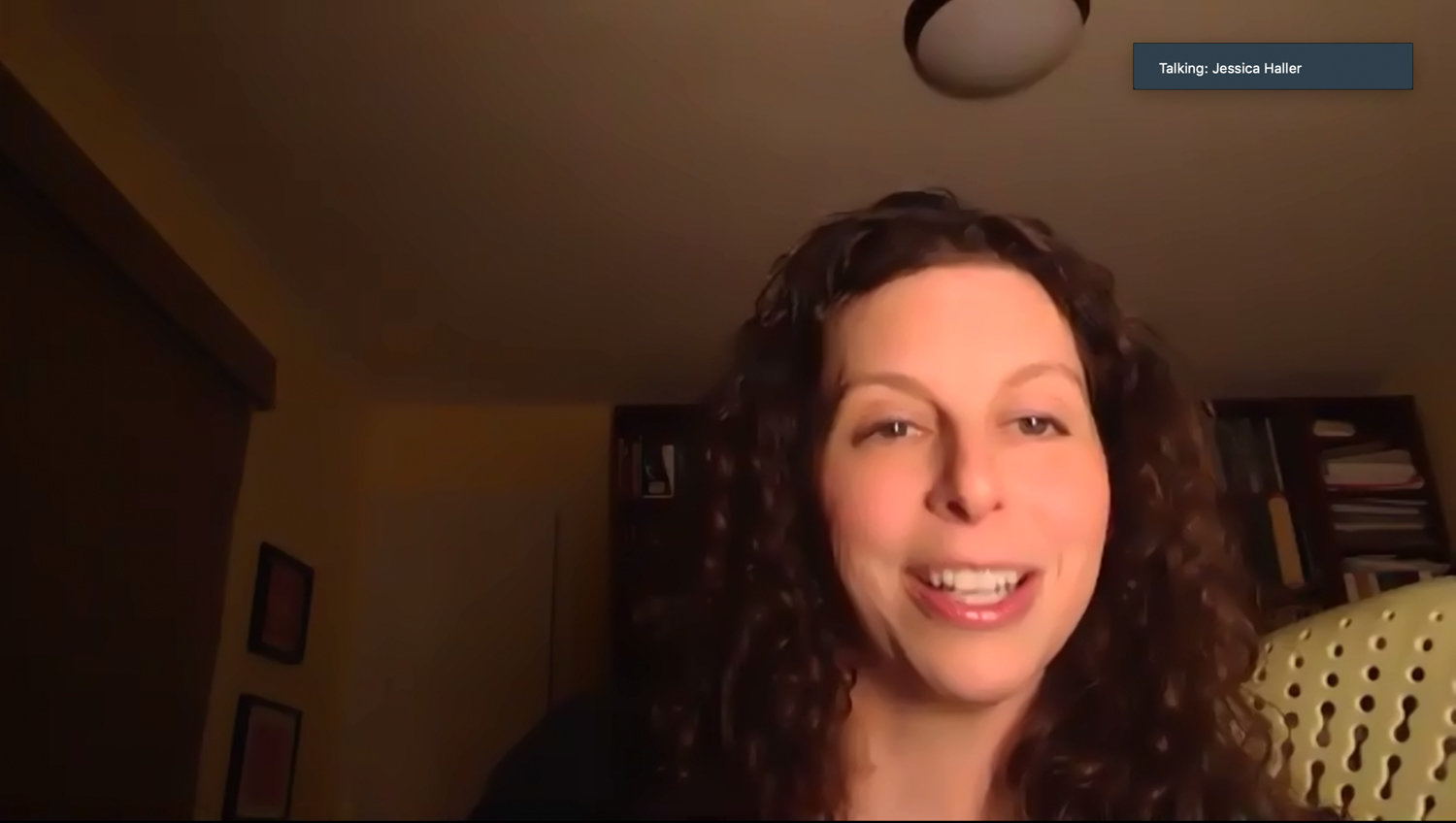 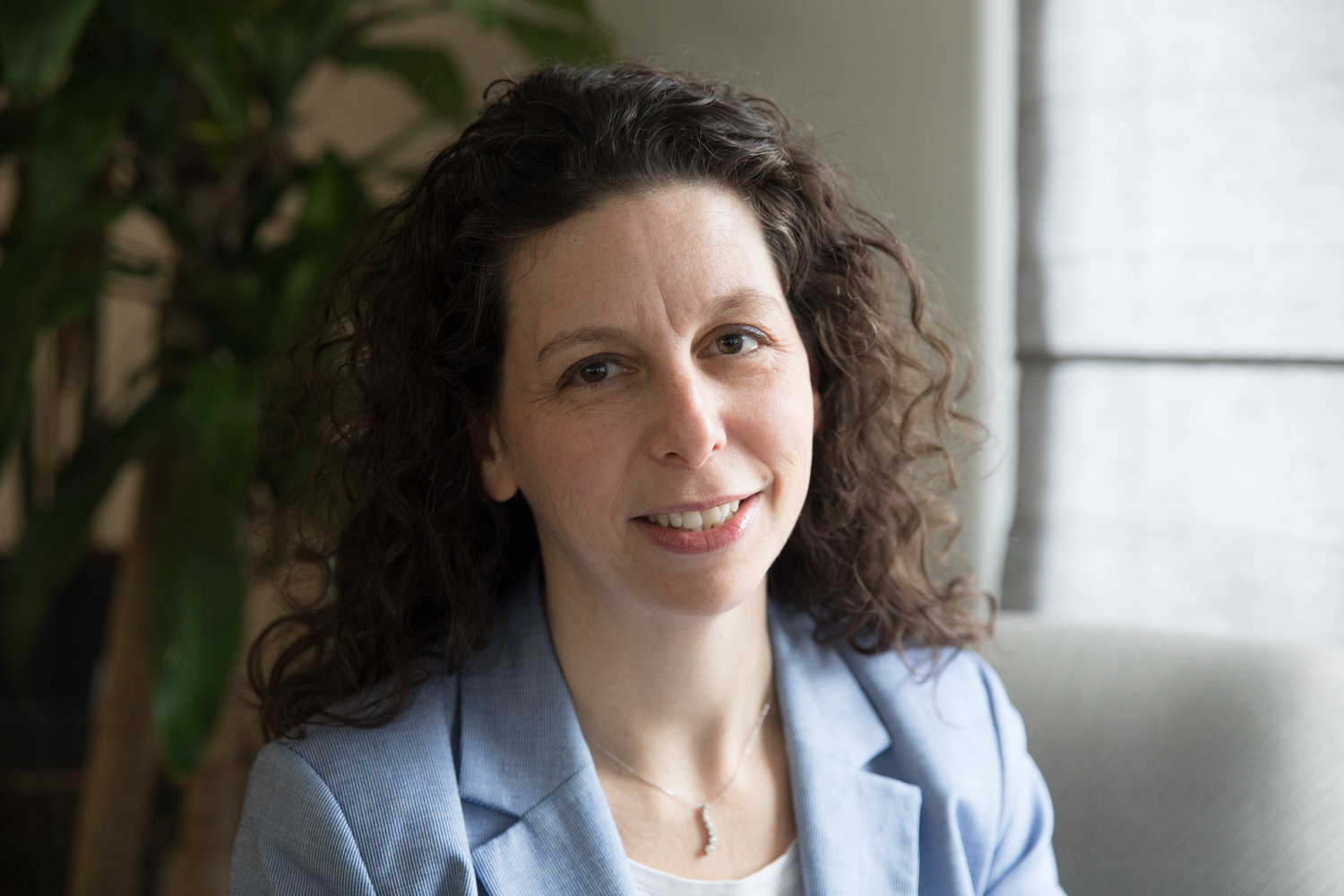 The environment is a major focus of Jessica Haller’s campaign for city council. She recently held a virtual town hall to talk about that and other aspects of her platform.
JULIUS CONSTANTINE MOTAL / File
Previous Next
By KIRSTYN BRENDLEN

Running a local campaign is hard. Keeping momentum for over a year until the election is hard.

What’s even harder? Officially launching a campaign in the middle of a pandemic.

That’s what Jessica Haller was doing as she prepared for her first campaign event since officially declaring her candidacy for Councilman Andrew Cohen’s seat. Just two weeks before, she found herself dealing with four children stuck at home after SAR High School and SAR Academy closed and recommended a quarantine for everyone who walked the halls there.

But because the coronavirus wasn’t letting her get out and about, Haller thought about a different way to introduce herself to voters, a virtual “house party” hosted on Zoom, a video-conferencing platform used by schools and colleges all over the country as physical campuses have closed.

Haller had been planning an in-person “house party” for a while, but realized she had to change strategies when “social distancing” became even more important.

“I never sort of got my act together, because when you’re running a campaign, there’s 700 other things to do, and I wanted an in-person house party,” she said. “So we kept not nailing the details down.”

But with events being canceled left and right, and Haller finding herself with less time to handle fundraising and phone calls as she made sure all four of her children were attending their virtual classes, she decided the time was right to launch. Even if others might have been distracted by coronavirus.

The race to replace Cohen doesn’t even really begin until the June 2021 primary, yet when Haller joined the race in January, the field already was crowded. Two of the three candidates — Dan Padernacht and Eric Dinowitz — had been part of the race for nearly two years at that point, jumping in when both thought Cohen was going to get nominated to become a judge.

They were later joined by Dionel Then, a museum docent who also was once an intern at The Riverdale Press.

For this particular event, however, some 20 people joined Haller from the comfort of their own homes to hear her put forward the ideas that were most important to her.

“I’m a mom, I’m a climate activist, I’m an entrepreneur,” Haller said from her desk. “I’m running for city council now because, from the depths of my soul, I know we need to change the systems in this city.”

Her primary concern is climate change, and that could take many forms across the district and the city.

Joel Chasnoff, who moderated the event, posed his own questions and read them out from the platform’s chat, where attendees could write in their concerns as Haller spoke.

Morgan Evers, a teacher and the mother of two sons attending local schools, asked about large class sizes at P.S. 24. It’s a concern of many parents whose children attend schools in the northwest Bronx, she said.

“While I think it is an incredible school, my son has amazing teachers, he is getting a great education,” she said, “I do think that 32 kids in a second grade class is too many.”

She knew that Assemblyman Jeffrey Dinowitz — the father of one of Haller’s opponents — has pushed for the abandoned Visitation School on West 239th Street to be razed to make room for a new school to alleviate overcrowding, but she noted she was disappointed the issue wasn’t a priority of other elected officials.

Of course, it also was hard to move the conversation far away from COVID-19, which has been shaping dialogue from health care inequality, to travel plans,  to schools moving entirely online, sometimes without an end date.

One attendee asked what Haller thought about public schools remaining open during the early parts of the pandemic as many students in the city’s system rely on an open school for meals, child care, and sometimes even laundry services.

No students at SAR, a private school, were relying on being there for meals, Haller said. They were all able to switch over to digital learning quickly and easily, as technology workers at the school already had started planning, ordering headsets, and making sure equipment was ready to go.

But most public schools don’t have that kind of technology, Haller said, or someone to set them up for remote learning.

“If we want real equity in our schools — and again, this is where equity ties into resilience,” she said. “If we want our kids and our city to be resilient, we need to create systems so that when bad stuff happens, when that pressure comes, when that virus comes, we don’t break, and everybody could be equal.”

Another question? How her district could serve as a blueprint for the rest of the city.

District 11 isn’t just the easternmost part — where Riverdale, Spuyten Duyvil and Fieldston are — it stretches east, past Van Cortlandt Park, to Woodlawn, Norwood, and Wakefield.

Easy access to a variety of services was one of the best qualities of the area, she said. Living within walking distance of the 1 train, several bus lines, Metro-North, libraries, and a variety of public and private schools are all perks of living in the council district.

“I want all of the neighborhoods in the city to have what we have in Riverdale,” Haller said. “There’s nothing new about saying that. But what I want to do, is I want to do it in a sustainable, equitable and resilient way.”

It was hard to know exactly how things would look moving forward, Haller said, given the how fast things were changing in the city and the country when it comes to the coronavirus.

But “it will end,” and until then, she’ll hold policy meetings via Zoom.

“I think that right now, we have a lot of qualified candidates,” Evers said. “It’s going to be a really difficult decision for a lot of people in this area.”

She would like to see more candidates hold virtual meetings, especially while social distancing measures are in effect, giving voters a chance to get to know who’s running.

Still, Haller has entered a race that is still more than a year from anyone casting their first ballots.

“I can’t even think that far ahead,” Haller said. “I think for right now, it’s how to keep moving forward given where we are today.”