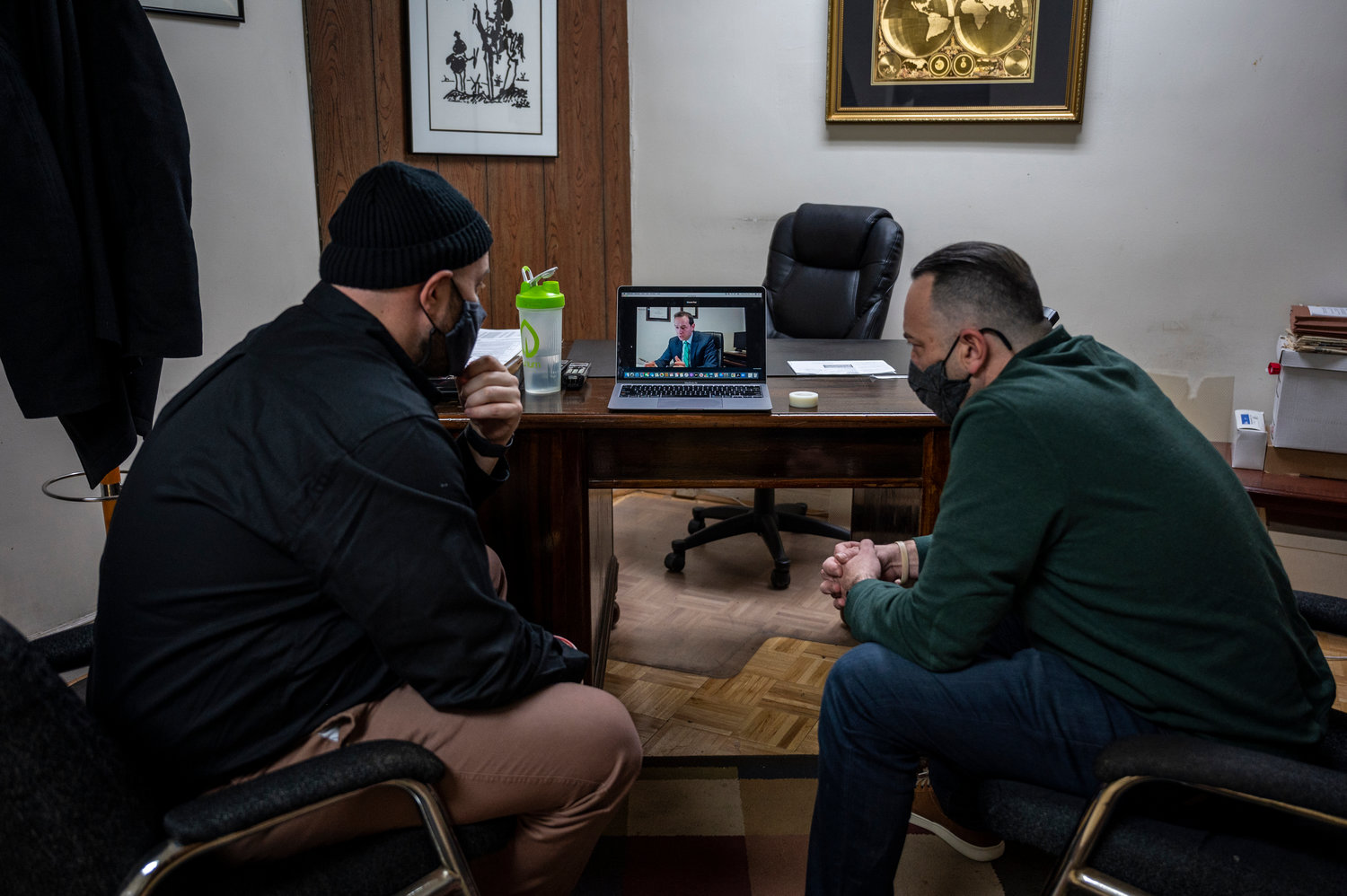 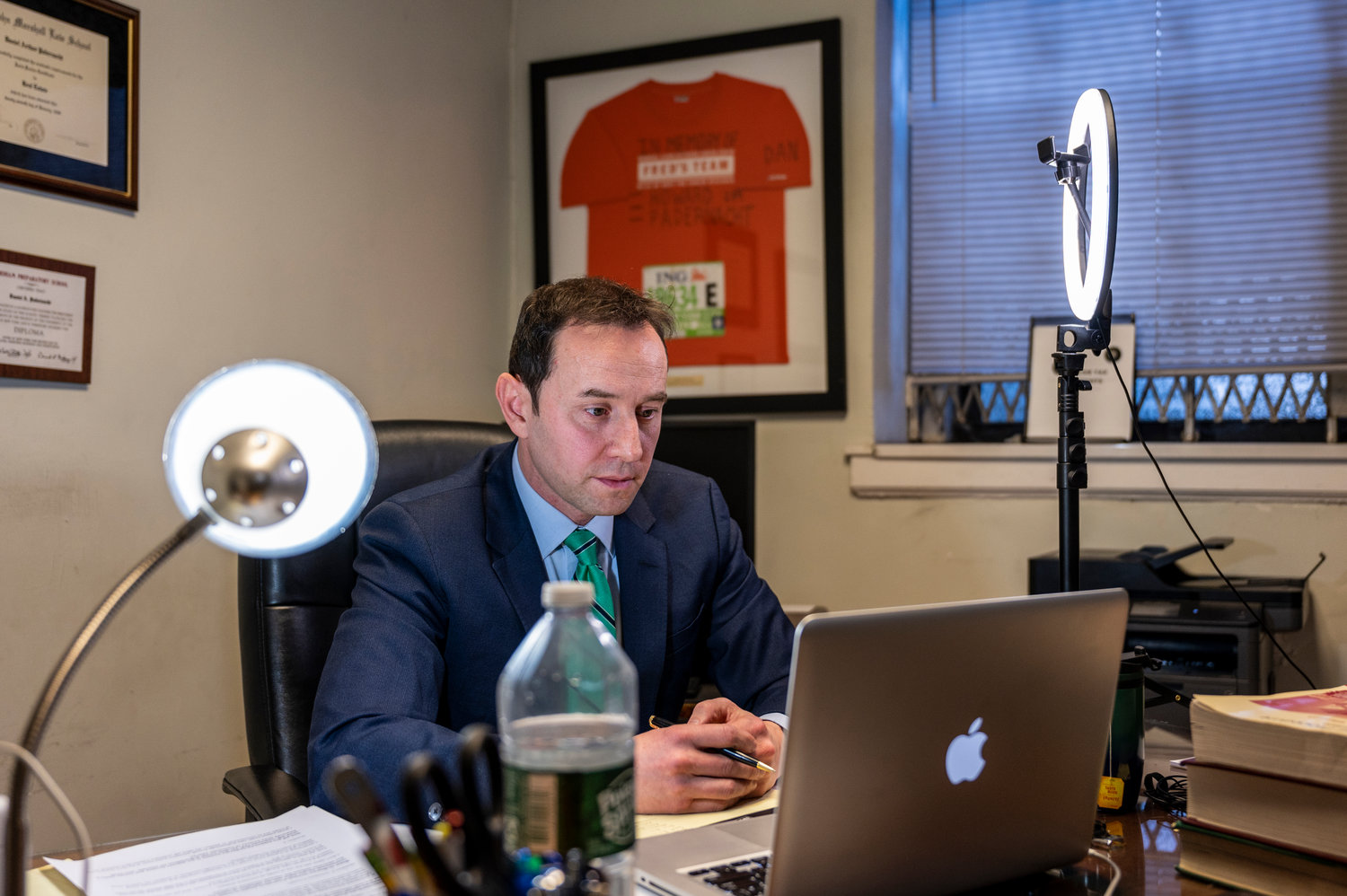 Dan Padernacht says his years on Community Board 8 have prepared him to tackle issues in the city council district that one belonged to Andrew Cohen. He is one of six candidates running to replace Cohen in a March 23 special election. Five of the candidates discussed the district’s issues at a Jan. 20 debate hosted by BronxNet and The Riverdale Press.
HIRAM ALEJANDRO DURÃN 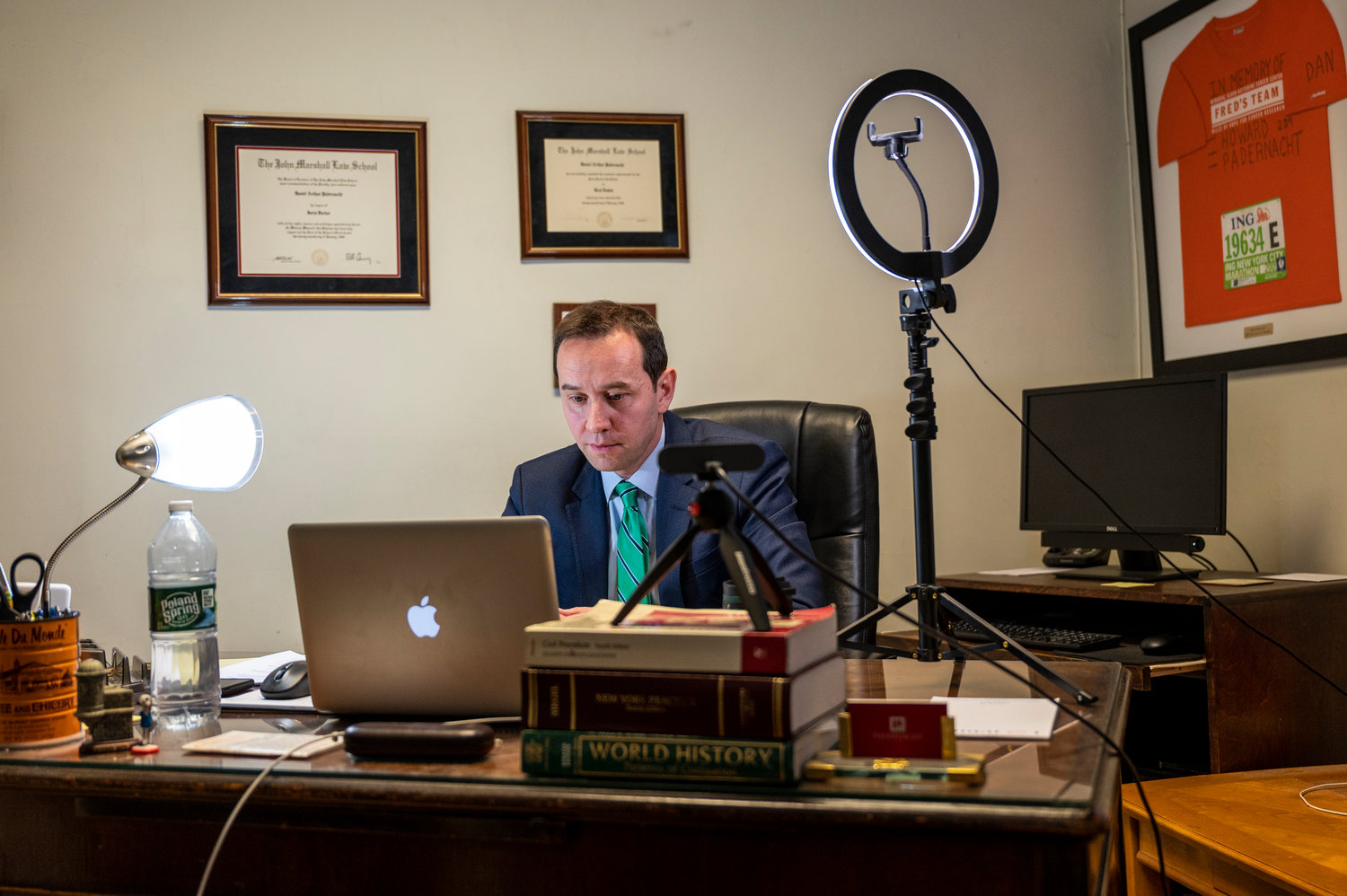 Dan Padernacht says his years on Community Board 8 have prepared him to tackle issues in the city council district that one belonged to Andrew Cohen. He is one of six candidates running to replace Cohen in a March 23 special election. Five of the candidates discussed the district’s issues at a Jan. 20 debate hosted by BronxNet and The Riverdale Press.
HIRAM ALEJANDRO DURÁN 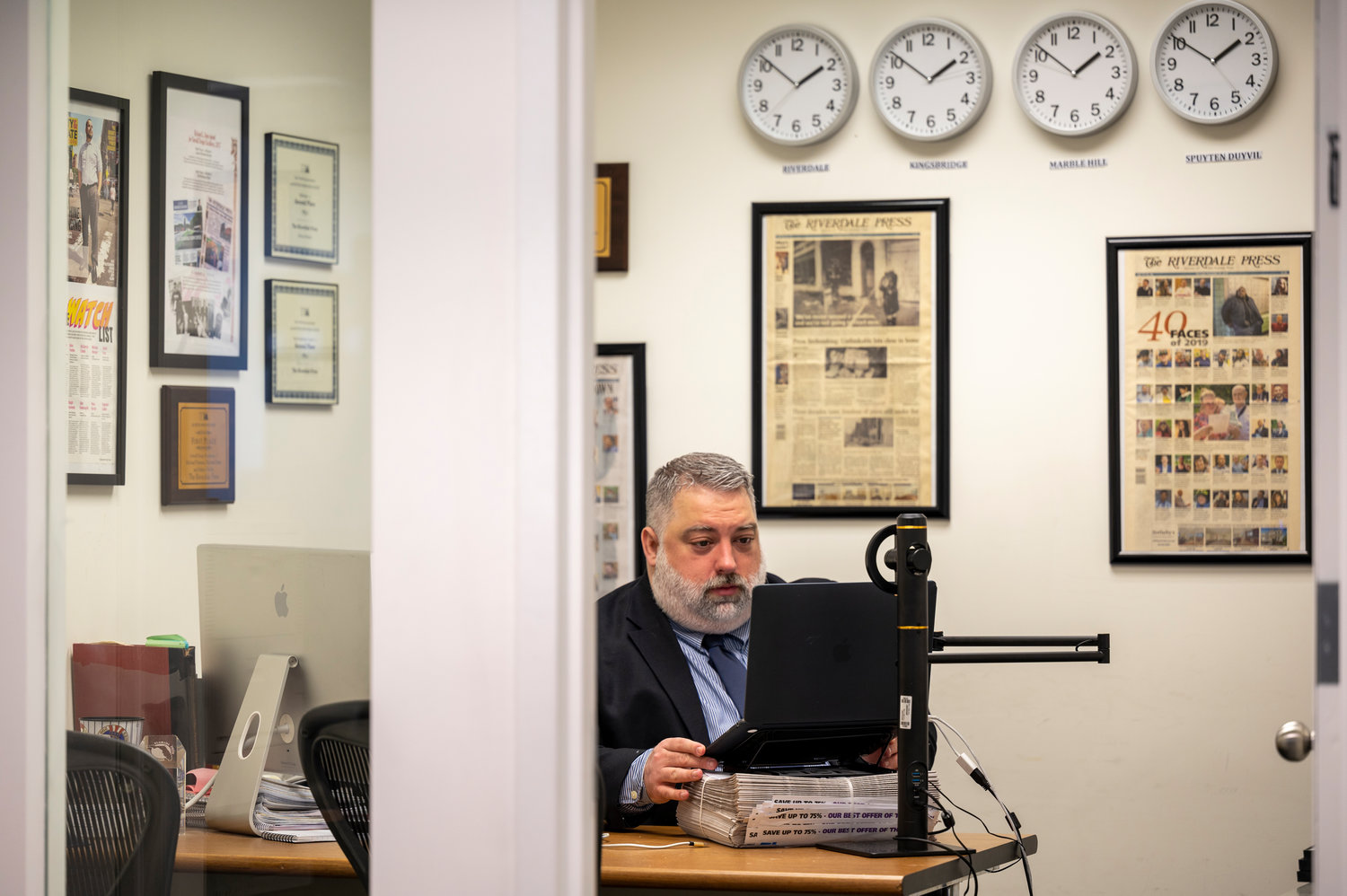 Making housing more affordable for low-income families is something many of the candidates looking to replace Andrew Cohen on the city council. This was one of many issues discussed in a Jan 20 debate moderated by Riverdale Press editor Michael Hinman and BronxNet reporter Sonyi Lopez.
HIRAM ALEJANDRO DURÃN
Previous Next
Reruns

Spanish subtitles on Optimum 69 or FiOS 2135

Eric Dinowitz has had some trouble escaping the shadow of his father, Assemblyman Jeffrey Dinowitz. Then again, some might say he’s not trying very hard to escape it.

Dinowitz, a special education teacher, is one of six candidates seeking to succeed newly minted Bronx Supreme Court judge Andrew Cohen in representing this part of the borough on the city council in a March 23 special election. With the backing of the powerful Benjamin Franklin Democratic Reform Club — which has received significant financial contributions from the elder Dinowitz over the years — and then there’s the name itself, it’s hard to deny family ties may give the younger Dinowitz an edge in not only this race, but his political career.

Dinowitz’s competitors have made it clear they think having a father and son represent the community at both the city and state level wouldn’t be good. It was something they expressed during the special election’s first televised debate Tuesday on BronxNet.

“I just don’t agree with the political dynasty within our own particular area,” said real estate attorney Dan Padernacht, one of four others who challenged Dinowitz in the debate hosted by BronxNet and The Riverdale Press.

“I mean, people know Eric because of his father,” Berkley said. “And maybe that isn’t a bad thing. But it does touch into some points of nepotism.”

If Dinowitz wins the special election, he said he’s confident it won’t be because of his family name.

“I think the voters watching tonight are going to judge us based on our commitment to our community, the work we’ve done, and our vision moving forward,” Dinowitz said. “Not on a name.”

If one thing was clear from this particular debate, it’s that the defining issue for the council district seems to be the equity divide between the west and east sides of Broadway. The district neighborhoods include wealthy — and primarily white areas — like Riverdale and Fieldston to the west, as well as racially diverse lower-income neighborhoods like Wakefield and Bedford Park to the east.

The equity issue manifests in how the coronavirus pandemic has disproportionately impacted the parts of the district with low-income people of color. Arts educator Mino Lora, who recently recovered from COVID-19, said many families in underserved parts of the district don’t have access to quality health care.

“In our district, 41 percent (of people) have public health care,” Lora said. “A significant number are uninsured.”

When it comes to housing, Lora believes the city needs to change how it determines affordability in lower-income areas. For her, it’s time to do away with area median income, the current way the city calculates what’s affordable in specific neighborhoods.

The city also needs to be much more intentional, Lora added, in building affordable units specifically for those who need them — including low-income families. And the homeless.

When it comes to housing density, Padernacht said, a council member has to look at zoning in each of the district’s individual neighborhoods. There needs to be a more even distribution of development between areas like Bedford Park that have been overdeveloped, and parts of the district with more open space.

“We have so much NIMBY going on — not in my backyard,” Haller said. “We really need to flip it to YIMBY, and say, ‘Yes, please. We’d like to welcome these people.’ We need to welcome the families in our communities.”

Continuing to work on the ground

Haller has made equity a central tenet of her campaign. However, as who many believe to be the wealthiest candidate in the special election race, she has been accused by some of being out of touch with the issues of the district. Padernacht even went as far as to say Haller lives in a “gated community with private security.”

Haller pushed back on the idea her large home insulates her from the struggles of working people in the district.

“Just to be totally clear, there are no gates around here, and you’re welcome to join all of the Bronx walking down the street,” Haller said. “I live where I live so that I can walk to the 1 train.”

One point that all candidates appeared to agree on was that the city needs to take decisive actions to help small businesses survive the pandemic. One way, Dinowitz said, is to force landlords to pay a vacancy tax that pushes them to quickly negotiate leases with their tenants instead of leaving storefronts vacant.

“If you’re a person living in the northwest Bronx,” Dinowitz said, “you know exactly what a vacant storefront looks like.”

Dinowitz believes in the Small Business Survival Act, but it’s still a work in progress. For instance, the city needs to make sure small businesses — not big box stores — are benefitting from it, he said. Small businesses also need guidance from the city on how to access the grants and programs that are available to them.

While Dinowitz presented many reasons why he should represent Cohen’s former district, he was the only candidate in the debate who wouldn’t commit to not following in the former councilman’s footsteps: That is, he wouldn’t guarantee he’d serve full terms if elected.

But Haller pointed out Cohen could have been just as good of a judge next year at the end of his term, as he is now with a year left and no one representing the community.

Especially with the coronavirus still out there — a topic none of the candidates could steer clear of. The recovery is an opportunity, Lora said, to tackle many of the issues that far preceded the pandemic.

“I am convinced that the only way that we’re going to do it is by bringing our diverse communities together,” Lora said. “Because now is the time for the Bronx to really reflect the multiracial democracy that makes us who we are.”