All but one withdraw from endorsement process, claiming club is breaking its own rules 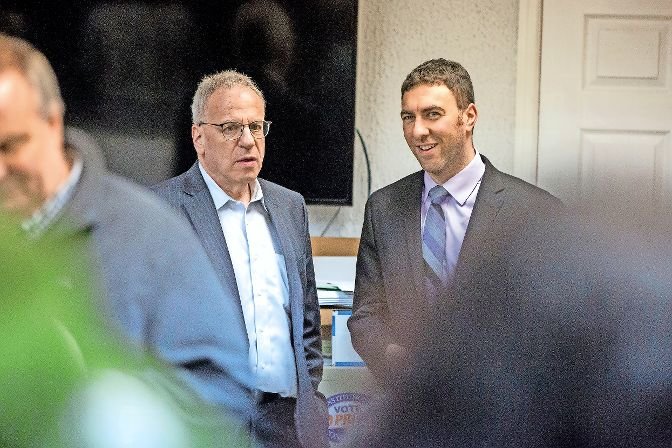 Assemblyman Jeffrey Dinowitz wants his son, Eric, to be the community's next councilman. The six people running against him say that's fine — but don't use the Benjamin Franklin Reform Democratic Club to do it.
JULIUS CONSTANTINE MOTAL / File
By MICHAEL HINMAN

The community's most influential political club decided recently that endorsing a city council candidate was far more important than giving club members a say in who should lead them. Now six of the seven candidates who originally sought that endorsement have their own message for the Benjamin Franklin Reform Democratic Club:

Thanks, but no thanks.

In a letter delivered Monday morning to Ben Franklin Club president Michael Heller, all candidates except Eric Dinowitz effectively withdrew their names from endorsement consideration. They took issue with the club's decision to completely overhaul its endorsement procedures, and the decision to suspend officer elections indefinitely.

The Ben Franklin Club has always required endorsement votes and officer elections to be conducted in-person. But because the coronavirus pandemic has made such mass gatherings impossible, the club's executive committee tasked Heller with creating a temporary voting system that club members saw for the first time during a Dec. 3 meeting, where they also were required to vote on it.

The club rejected pleas from some members to delay the vote allowing more time to review the proposal, or even what some say is a required second vote to make such a change to its own bylaws, according to the letter. Instead, it adopted a plan similar to how New York conducted mail-in balloting — a process that would be almost independently managed by a paid staff member of Jeffrey Dinowitz, father of Eric Dinowitz. Eric Dinowitz is one of the seven seeking to replace Andrew Cohen on the city council.

The younger Dinowitz did not sign onto the letter to Heller, but the remaining six candidates did — Carlton Berkley, Jessica Haller, Mino Lora, Abigail Martin, Dan Padernacht and Marcos Sierra.

Heller wrote his own response to what he called the "Padernacht letter" late Monday, telling the six candidates their demands to withdraw from endorsement consideration couldn't be honored, because it was too early to make such a decision.

"The letter is premature since each of you could only withdraw your request for the club endorsement if it were awarded to you after you had won," Heller said. "And the vote count has not yet been conducted."

But since the six have asked, Heller said that if any of them do win, the club's endorsement will instead go to the candidate with "the next highest vote total."

However, Heller changed gears immediately, stating that the club has "always" considered "recognized candidates" for endorsement, and that once they are recognized, they can be considered — whether they want that consideration or not.

"Candidates for public and party office do not have the prerogative to determine whom the club may consider for endorsement," Heller wrote.

Depending on which way the Ben Franklin Club reacts, either all seven candidates will be considered, or only one will be left standing: Eric Dinowitz. He refused to be part of the letter, telling The Riverdale Press in a statement the Ben Franklin Club conducted a "fair and open process" when considering who to endorse.

"My campaign is going to remain focused on giving my neighbors a voice in the city council, and how the Northwest Bronx recovers from this pandemic in a way that is equitable and uplifts what makes our community a great place to live an retire," Dinowitz said.

Still, other candidates like Jessica Haller believe the club did not follow its own rules when it amended bylaws — even temporarily — to put endorsements ahead of officer elections.

"The president of the club said that this situation is like 'fixing the engine while flying the plane,'" Haller said, in a statement. "I've been in those situations. This is not that. This is more like ignoring (a) red-engine light until the night before you need the car.

"I refuse to participate in a sham process and find it both ironic and unfortunate that the 'reformed Democratic' club fails to recognize that its own absurd rules are in dire need of democratic reform — and the community in dire need of new voices."

And there is value to a Ben Franklin Club endorsement beyond just bragging rights, the candidates claimed. Per club rules, endorsed candidates get exclusive access to club facilities and resources. Also, all 26 members of the Ben Franklin Club's executive committee — the working core of the club — would only be allowed to petition and campaign for the endorsed candidate, and no one else.

"It is disappointing that, in a democratic society — especially in today's environment — there seem to be elements in this race that are intent on swaying the outcome of this process," Sierra said, in a statement.

"The actions by the Ben Franklin Club make it clear that our community needs new leadership," Martin said, in a statement.

Cohen, who was elected to the Bronx Supreme Court in November, is expected to resign his city council seat next week. It will then be up to Mayor Bill de Blasio to set a special election date to replace him temporarily — expected to come by the end of March.

Cohen's ascension to the supreme court was an open secret for years. The Bronx-wide Democratic Party has full control over who gets nominated — and ultimately elected — to the bench. Whispers inside political circles suggested Assemblyman Dinowitz could clear an early path for his son to seek the city council seat by moving Cohen out of it through a judicial nomination.

That seemed inevitable in 2018 — to the point that real estate attorney and former Community Board 8 chair Dan Padernacht jumped into the race, followed almost immediately by the younger Dinowitz. However, the county party was attacked over reports it would offer defeated state senator Jeffrey Klein a judgeship as well, which reportedly ruined not just Klein's chances for the bench that year, but Cohen's as well.

But much of that was forgotten in the wake of a pandemic, with Cohen getting the judicial nod, effectively opening the seat. While Padernacht and Dinowitz have more than once tangled through their CB8 committees they lead, others have also made their mark in the race. Haller has raised significant amounts of money already, while Lora and Sierra work to diversify the race.

In its letter, the candidates are demanding the Ben Franklin Club abandon its current endorsement procedures, and instead focus on its own officer elections, which have been postponed indefinitely.

Padernacht, as a member of the Ben Franklin Club, spoke against the decision to postpone officer elections at the meeting that decided it. He says, through the letter to the political club, that his position has not changed.

"We don't choose if and when we are going to abide by the rules of a democratic process," Padernacht said, in a statement. "It's important to shine a light on the improper actions of groups that have an impact on the electoral process in our community."

CLARIFICATION: A portion of Abigail Martin's original quote was removed because it was inadvertantly pulled from a non-final  draft.