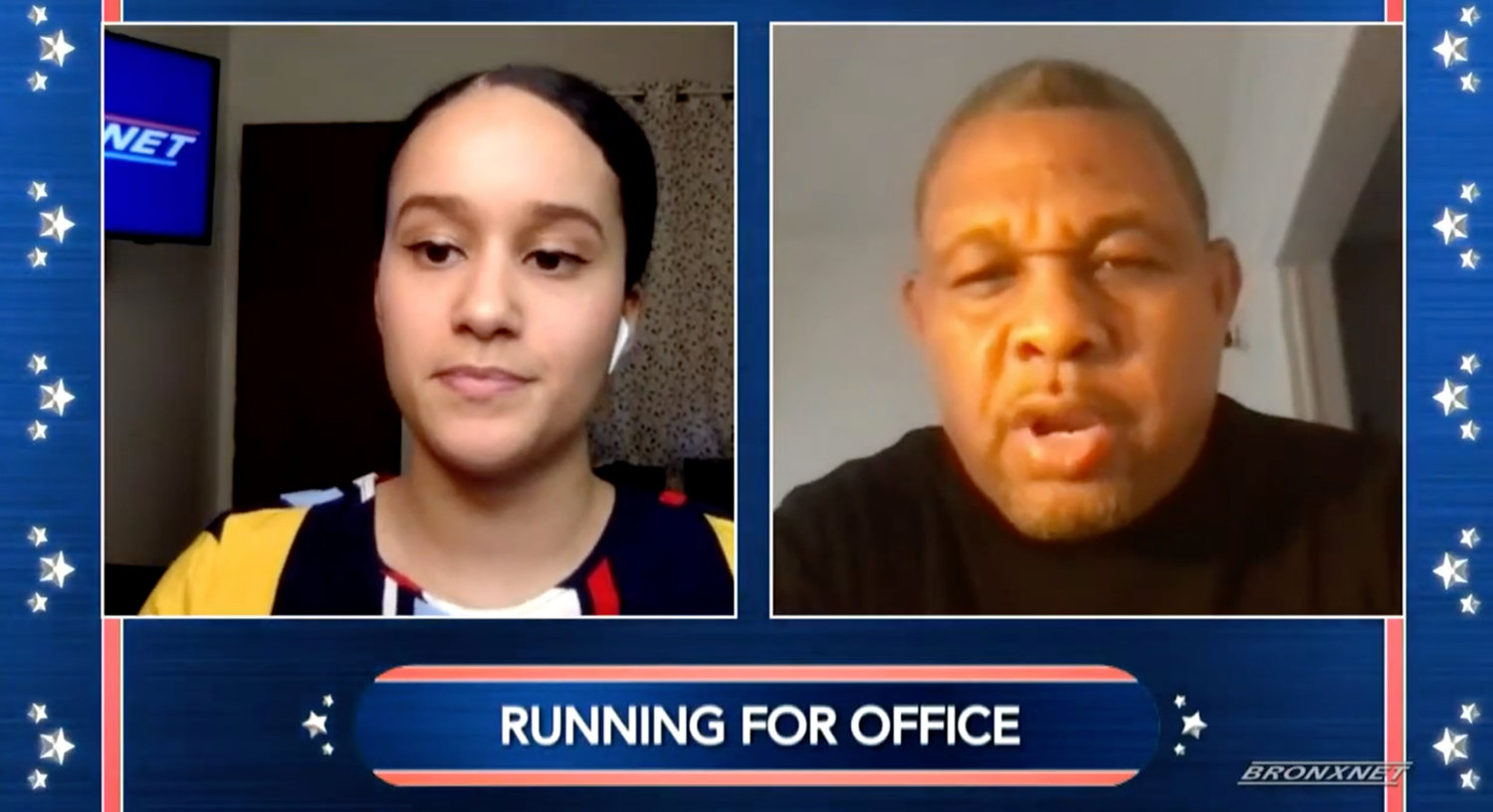 Carlton Berkley fields a question from BronxNet reporter Sonyi Lopez during a debate the cable channel hosted with The Riverdale Press earlier this month. Berkley may be far behind in the fundraising race for the March 23 city council election, but he spends nearly every dollar in the Bronx.
By MICHAEL HINMAN

It's supposed to be a local city council special election race, but some might say it's not feeling very local. That is, unless you're Carlton Berkley.

Berkley raised just under $7,750 in his effort to succeed Andrew Cohen on the city council — a fraction of the tens of thousands raised by his opponents. But Berkley is spending almost every dollar solely in the Bronx — something no one else in the race can say.

Of the candidates raising money in the March 23 special election, the retired New York Police Department detective is by far lagging in both donations and spending. Yet nearly 77 percent of Berkley's funds are coming from the Bronx, and he's turning around and spending all but 5 percent of it back into the borough.

That's 95 percent of Berkley's raised money being returned to the borough, while his opponents are spending just 16 percent of their total dollars in the Bronx. The worst offender? Fieldston environmental activist Jessica Haller, who already spent more than $96,000 on this special election race, but just 9 percent of it — $8,400 — stayed here.

Haller spent nearly $35,000 in this past month alone — second only to former teacher Eric Dinowitz. Nearly 95 percent of her money went outside the borough, including $18,500 she handed over to her Brooklyn political consulting group for what was labeled as "digital ads."

Haller's biggest local expense was to pay the $1,500 salary of a campaign worker, activist Iffat Mahmud-Khan, and another $235 to Bronx Design Group for postcards.

Dinowitz did spend more of his money here in the Bronx over the past month, but nearly 80 percent of it found its way outside the borough — more than $30,000 of it to another Brooklyn-based political consulting group. Lawyer Stanley Schlein collected $8,000 from Dinowitz's coffers, while the Benjamin Franklin Reform Democratic Club cashed a check for nearly $1,400 for "space usage."

The club only offers its West 231st Street storefront space to the candidate they endorse. Dinowitz — son of Assemblyman Jeffrey Dinowitz, who himself has paid out nearly $65,000 in campaign contributions to the club over the last decade — won the endorsement after the other candidates in consideration withdrew. They protested the club's decision to continue with its endorsement vote while suspending officer elections in a way they said directly violated the club's bylaws.

Schlein is considered the main power behind the Bronx Democratic Party machine, which helped propel Cohen to his new Bronx Supreme Court judge seat in the first place.  Cohen's resignation at the end of last year set up the special election. Because special elections are generally low turnout, many observers say the younger Dinowitz is the candidate to beat because of his name and his father's political connections.

So far for this special election campaign, candidates have spent more than $47,000 in the Bronx. While that might sound like a lot, the five candidates shuffled nearly $220,000 more outside of the borough.

And now, as all six candidates enter the final month of campaigning, more than $500,000 of taxpayer money is now available to all the candidates except Berkley, who didn't qualify for matching funds yet, and conservative independent film director Kevin Pazmino, who says he's not going to raise or spend money on his campaign.

If the four remaining candidates continue their spending ways, only $89,000 of those tax-supported matching funds will stay in the Bronx, while well over $400,000 will end up elsewhere.

Mino Lora and Dan Padernacht have raised considerably less than Haller and Dinowitz overall, but are both keeping more of their money inside the borough. Lora, a theatre non-profit executive director, has spent 33 percent of her funds here in the Bronx, while Padernacht — a real estate lawyer in Kingsbridge Heights — has kept 25 percent of his funds local.

There is still a lot of race — and money to spend — left ahead of March 23. More than $480,000 sits in campaign bank accounts, and the four candidates who received matching funds are all practically on equal footing for the last stretch.