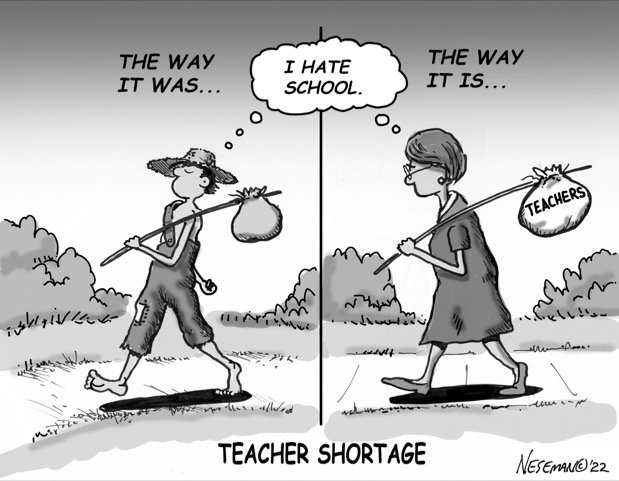 We don’t know much about him, except that he was 61 years old, and he had visited a live animal market in Wuhan, China.

But his death was the first of nearly 6.5 million worldwide who would die from complications of what would come to be known as COVID-19. And just 10 days later, on Jan. 21, 2020, the first confirmed case of SARS-CoV-2 in America would be found in Washington state.

We are just months away from COVID’s third anniversary, and while the pandemic itself has changed to much of what we call “normal,” it does feel like life is ever so slowly returning to what it was before the ball dropped in Times Square on Jan. 1, 2020.

Social distancing is gone. Masks, while still seen — and even worn — are nowhere near as prominent as they once were. And getting the sniffles doesn’t evoke the same kind of panic it once did.

If we had looked hard enough, there are still signs of those troubling times round us: worn stickers on floors of businesses calling for six feet of separation.

Signs on shop entrances requiring face coverings. And even the occasional COVID-19 mobile testing site on the street.

Hospitals aren’t overwhelmed. The death toll is no longer prevalent. And far more of us are vaccinated against the virus than those who aren’t.

There are many who say the coronavirus is now endemic rather than a pandemic, meaning it’s here, we’ll see seasonal surges and maybe even some variations, but it’s not the threat it once was.

Yet those variants remain unpredictable, and it’s not clear whether current vaccination levels will stave off future mass hospitalizations and death.

And yes, people are still dying from the virus, at a clip of more than 600 per day in the United States, according to some estimates. That’s one person every two minutes.

But how scared should we be? What numbers should we pay attention to? And what should we do if we fear exposure to the virus, or develop symptoms that closely resemble COVID-19?

First and foremost, we must stop focusing on who is getting the virus and how many, but instead on what impact it’s having on hospitals and mortality. Those numbers were important before there was a vaccine, but not today, when a vast majority of those inoculated recover with no major complications, or even the need to visit a hospital.

The virus and its many variants will continue to infect people, just as the flu does, and even the common cold. Yes, COVID-19 remains far deadlier than either of those ailments — and thus more serious — but for those of us not working in public health, spending so much time tracking every case accomplishes very little, except to raise anxiety.

If you find out you were in the same room as someone who tested positive, you can’t ignore it. But you don’t need to rush to quarantine, either. The Centers for Disease Control and Prevention recommends continuing with your life as normal. Just wear a mask for the next 10 days while indoors, or while close proximity to others.

If you start showing symptoms, get tested right away. If you don’t, wait a least five days.

If you do test positive, only then should you isolate. And then just for five days, as long as you fever breaks before the start of the fourth day without the help of medication, and your other symptoms are improving. Still, even if you can end isolation, you should still wear a mask through the 10th day.

While it’s nice to focus on other things in life — and in the news — rather than the coronavirus, we can’t forget about it. More than a dozen people are dying of the disease in New York each day, on average. And even if you survive, there are still a number of other complications that can be outright debilitating long after you recover from the initial infection, like long-COVID.

And many people we interact with are considered “vulnerable,” meaning they may not be able to fight the virus like the rest of us. So wear a mask when you’re around someone who might be more at risk. Wear one in large groups, especially indoors. And if someone starts showing symptoms, now exactly how you can help stop the spread without disrupting your life.

Each day brings us closer to our normal lives, so long as we don’t forget what upended all of them in the first place.