Bar and bat mitzvahs continued on through pandemic — just online 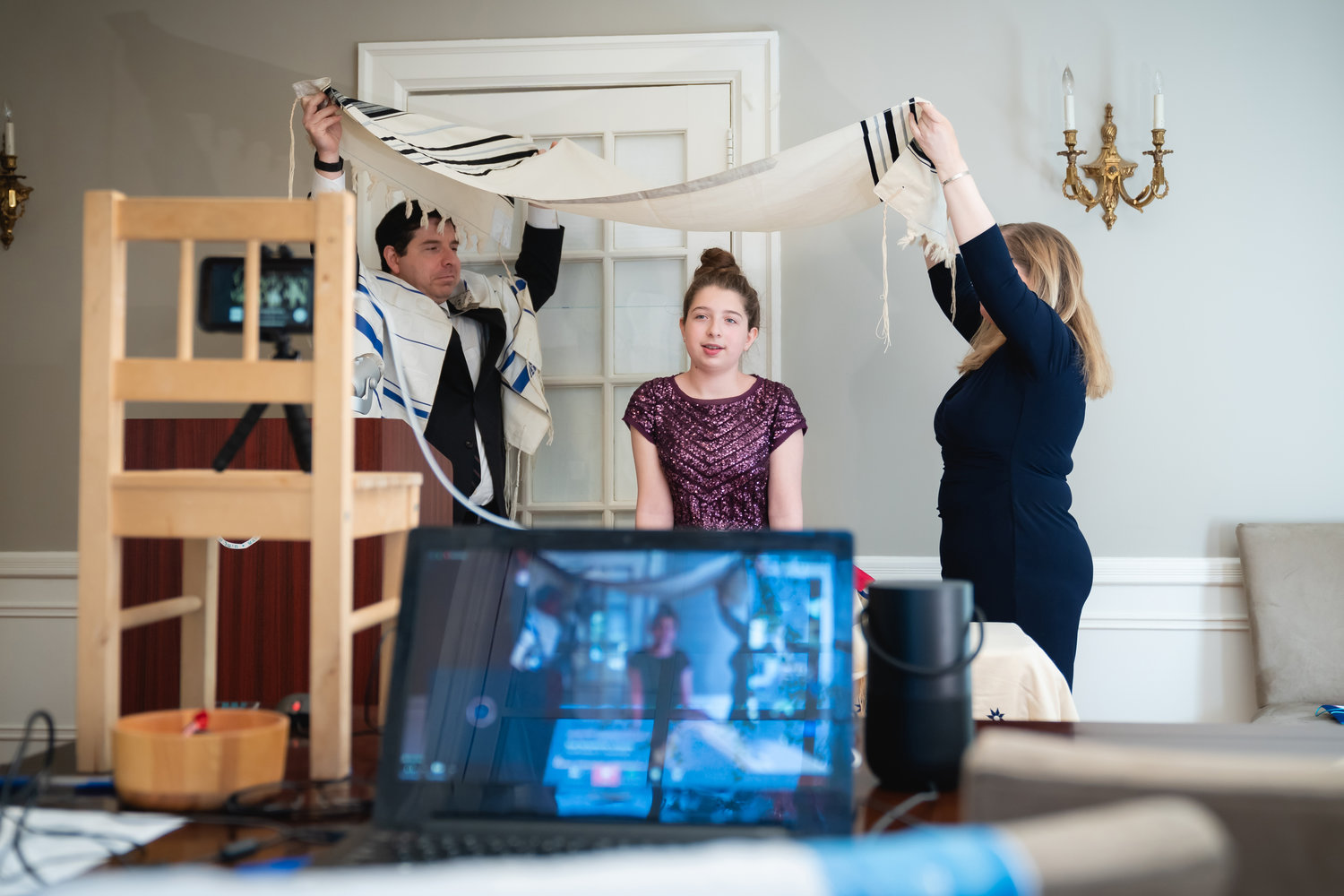 Maddie Dickstein’s parents held a family heirloom Jewish prayer shawl — called a tallit — over her during her virtual bat mitzvah. This was one of many virtual ceremonies called ‘beit mitzvahs’ held by the Conservative Synagogue Adath Israel of Riverdale during the coronavirus pandemic..
Courtesy of hedvANDan Photography 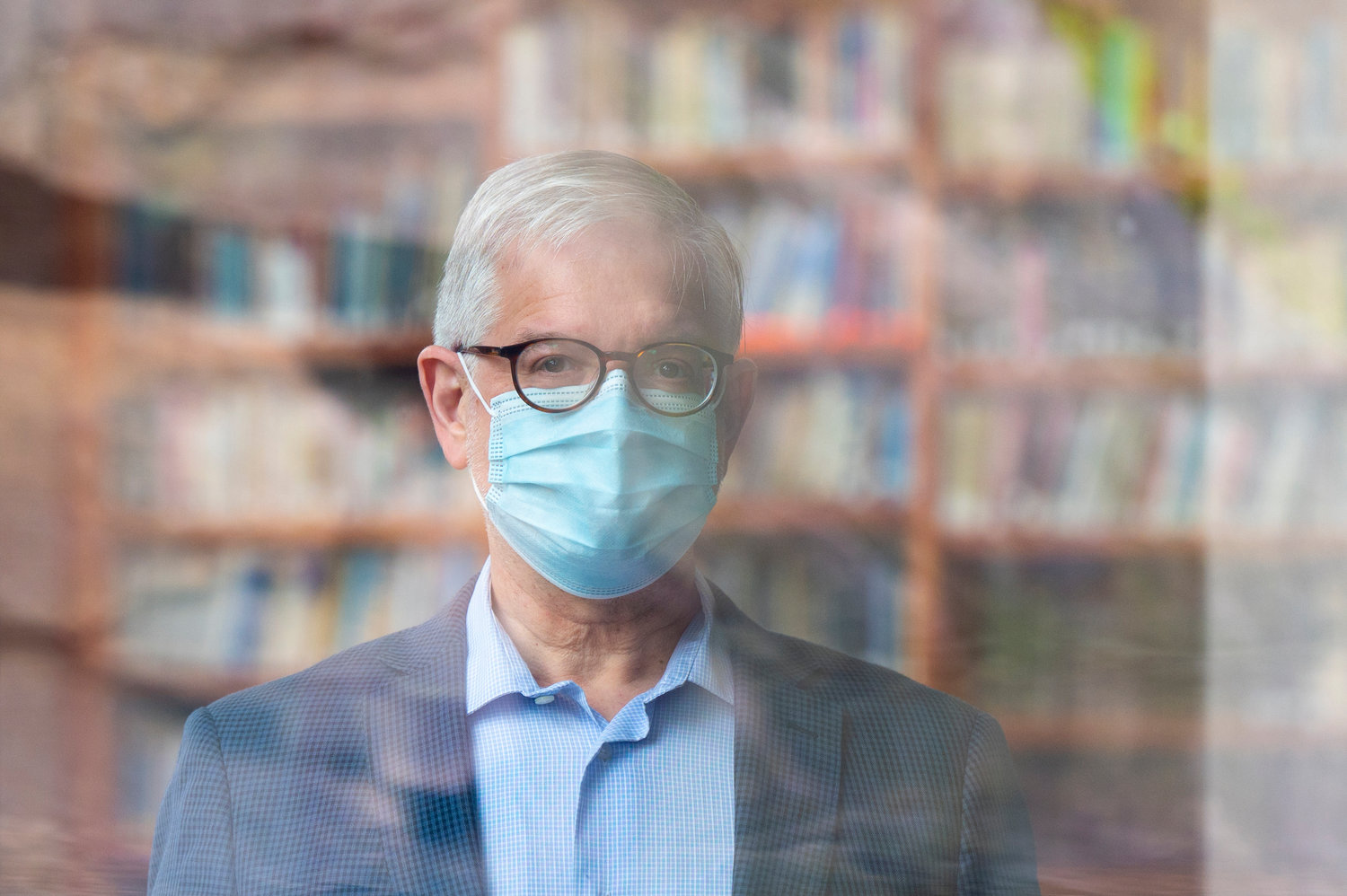 When the coronavirus pandemic hit, Rabbi Barry Dov Katz of the Conservative Synagogue Adath Israel of Riverdale had to quickly find a new way for kids in his congregation to celebrate their bar and bat mitzvahs. So, Katz and his synagogue team invented the ‘beit mitzvah,’ a virtual service held over the online videoconferencing app Zoom.
HIRAM ALEJANDRO DURÁN 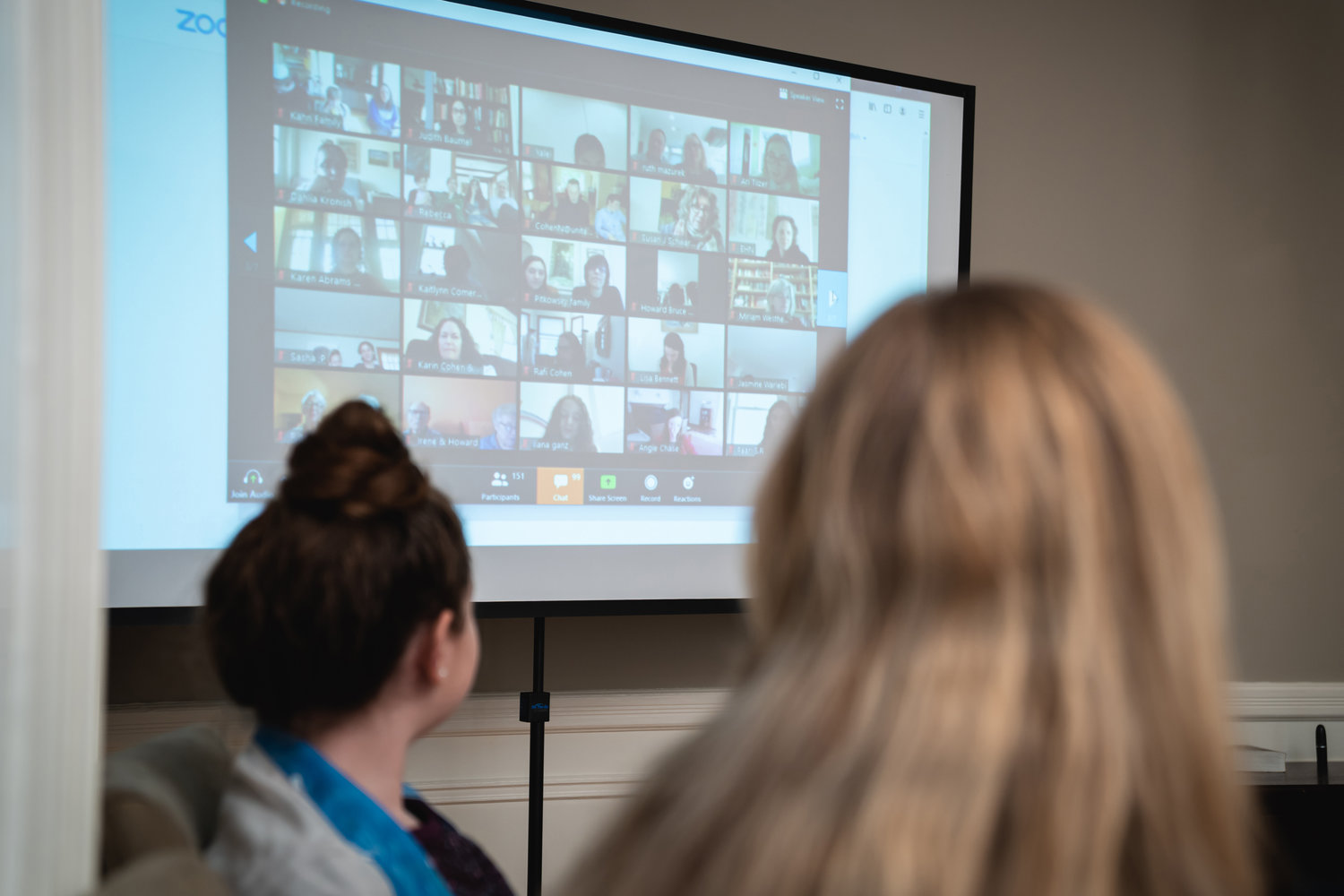 Maddie Dickstein’s parents set up a projector for her virtual bat mitzvah — or what her synagogue called a ‘beit mitzvah’ — so she could see more of her friends and family’s faces on the online videoconferencing app Zoom. Conservative Synagogue Adath Israel of Riverdale held many of these beit mitzvah ceremonies during the coronavirus pandemic.
Courtesy of hedvANDan Photography 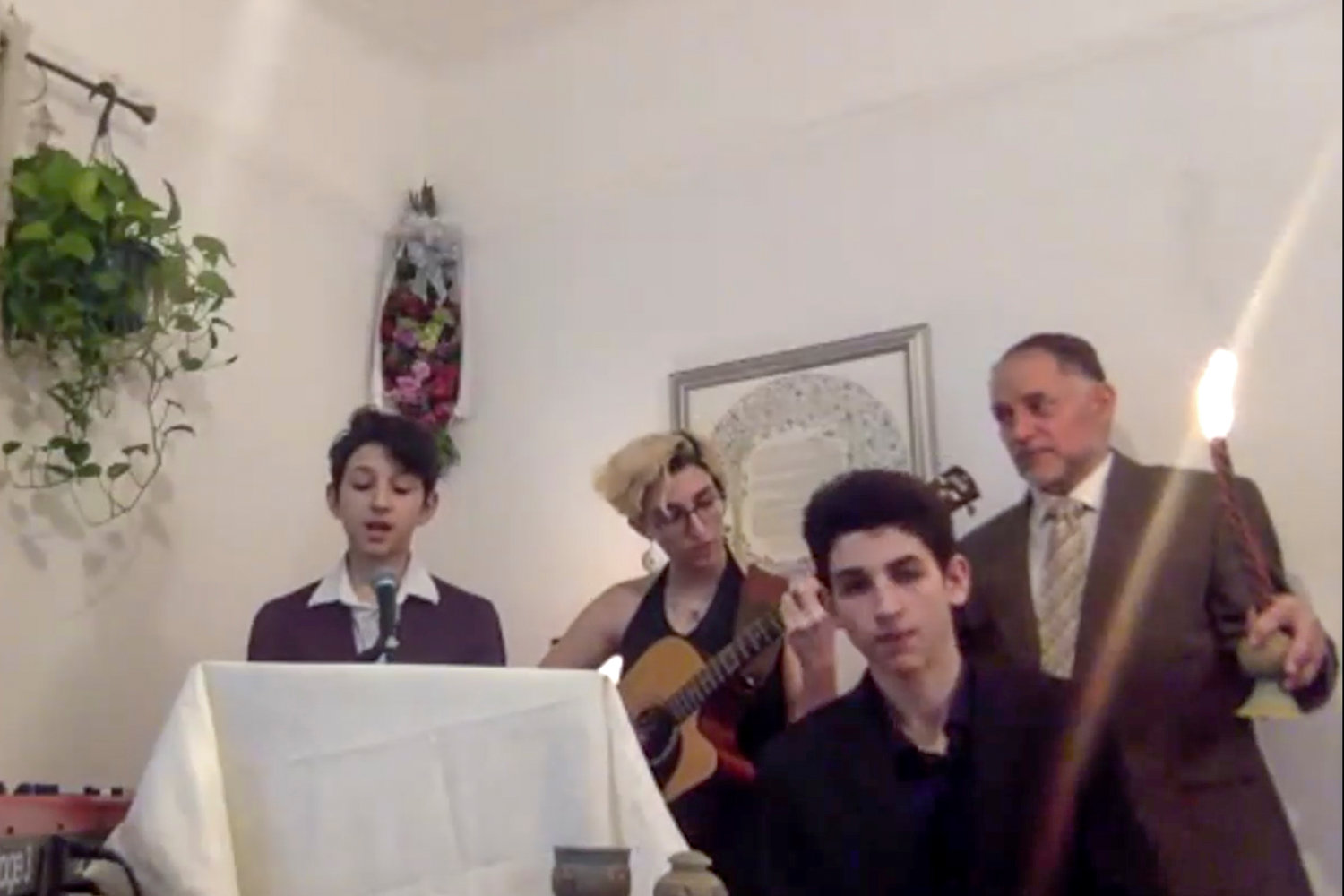 Zohar Cabo was one of the first kids at the Conservative Synagogue Adath Israel of Riverdale to host a virtual bar mitzvah amid the coronavirus pandemic. Cabo’s was the first of many ‘beit mitzvahs,’ as they came to be called, held by the synagogue last spring and summer.
Courtesy of Hadassa Rosenkrantz
Previous Next
By ETHAN STARK-MILLER

The coronavirus pandemic has forced many to quickly figure out how long-planned life events like weddings could work in a time of forced social distancing. Many simply postponed these events indefinitely, but not everything can be pushed back.

The show must go on for bar and bat mitzvahs, the rite of passage tied to when a Jewish boy or girl turns 13 and reaches religious maturity. Although ceremonies can happen months from a young teenager’s actual birthday, there’s only so long one can delay.

But as COVID-19 shut down any chance of bringing even the smallest groups together, Rabbi Barry Dov Katz took on a grim task of telling families at Conservative Synagogue Adath Israel of Riverdale these milestone events weren’t going to go as planned.

“People spend their whole lives — over 13 years — thinking about these events,” Katz said. “Thinking about who’s going to be there and planning every little detail of the synagogue service, and the party, and all of that.

And, I had to call people and tell them, ‘Sorry, this weekend isn’t going to look like what you wanted it to look like.’”

But Katz and his team quickly came up with a solution: Move these ceremonies onto the Zoom online videoconferencing app. There was some skepticism at first, but early on in the pandemic, CSAIR hosted the first of these virtual ceremonies, which Katz called “beit mitzvahs.” “Beit” is the Hebrew word for “house,” which made sense since these ceremonies would indeed take place in the family home.

Finding a way to bring it together

Many of these beit mitzvah events were Saturday night affairs, Katz said, open virtually to invited family and congregation members. They also sometimes took place on Sunday and Thursday mornings.

None of these could be full religious services, Katz said, because that would require a minyan — a quorum of 10 Jewish people in a room to lead the prayers.

Instead, a typical beit mitzvah focused on the teen reading from the Torah — the Jewish prayer scroll — which is usually the main event of the in-person ceremony. There also was time devoted for the parents to talk about their child, and even for Katz to fit in a sermon.

Of course, there was a bit of a learning curve when it came to shifting these traditionally in-person ceremonies online, the rabbi said. One of the big challenges was staying coordinated with a number of different people, all in separate individual locations.

“We were really nervous about it,” Katz said. “The family was in their house. I was in my house. The cantor was in her house. Relatives were wherever they were. “

Additionally, many relatives didn’t know how to use Zoom. So Katz would have to spend the first 10 minutes or so of the ceremony explaining specific features of the app, like how to chat with others.

With a bar mitzvah planned for mid-March last year, Zohar Cabo was one of the first to try a beit mitzvah.

The sudden shift to a virtual ceremony was disappointing in many ways, Rosenkrantz said. But at the same time, it allowed them to include family from distant places like Israel who would have never had the opportunity to participate in Zohar’s bar mitzvah in first place.

Such ceremonies can already fray nerves for its young celebrants, but Zohar was even more nervous about all the sudden changes because of the pandemic. In the end, however, he said he felt more comfortable reading from the Torah in his living room than at the bimah in front of a live audience at the synagogue.

“There was a sense of peace being able to do it in my own house,” Zohar said.

His favorite part of the service? When a video played of Zohar singing “Somewhere Over the Rainbow” when he was 4. That was immediately followed by his siblings leading a live rendition of the “Wizard of Oz” classic.

When an idea is just too good

The beit mitzvahs got increasingly popular as the days went on, Katz said — to the point where ceremonies were happening almost every weekend. While they weren’t quite the ceremonies these families had dreamed about, there was still something very special about them.

“It was really amazing, because once we started and the kid started chanting and speaking and all of that, it felt holy,” Katz said. “It felt like a bar mitzvah.”

But even this can ultimately be recreated at home, Katz said. One way could be by draping the table in a cloth passed down through the generations, or placing pictures of relatives who had passed away behind the teen.

“They would create a set for the bar and bat mitzvah ceremony that was really very meaningful to people,” the rabbi said. “Then when the relatives Zoomed in from wherever they were, they could see it, and it was a connection across the miles.”

Maddie Dickstein wanted to create a set that would make her beit mitzvah feel more like the real thing. So, her mother Nadine Cohen borrowed a Torah scroll from the synagogue and they draped their table with an embroidered cloth. They also used a wooden podium personalized with a logo Maddie designed on the front.

“We worked together to basically convert the dining room of the house that Maddie’s grown up in into a synagogue,” Cohen said.

They also had a sophisticated production set up, Cohen said, with an iPhone to record, a Yeti microphone for sound, and a couple of computers for following and projecting the Zoom.

“I think one of the things about bar and bat mitzvah … is sometimes we just do it the same way because that’s the way we’ve always done it,” Freed said. “So, when all of a sudden we had to really start from scratch, it allowed people to express individuality through beautiful ritual, and the set, and the production in ways that I don’t think was necessarily available to them when everyone was doing the same thing in shul.”

CLARIFICATION: While a traditional minyan requires 10 men, minyans for Conservative synagogues simply require 10 people. A story in the April 15 edition did not make this clear.