Mayor's move, however, is not praised by other electeds 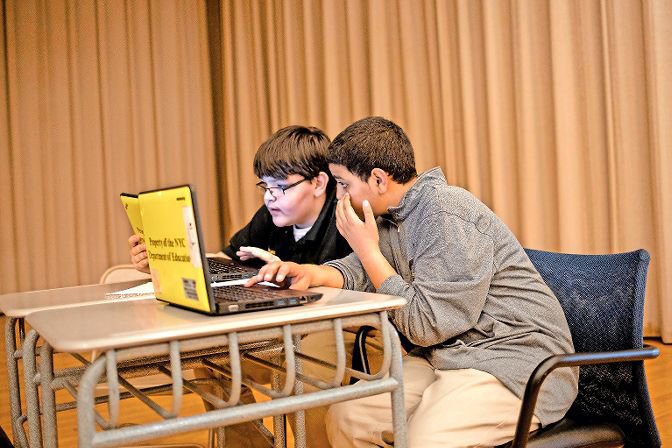 While some educators, like social studies teacher Michael Simmon, can’t wait to get back to his home base at IN-Tech Academy, other teachers were worried if their buildings are truly safe in the wake of the coronavirus pandemic. Mayor Bill de Blasio didn't think so with positivity rates hitting 3 percent, shutting public school campuses down in the city.
JULIUS CONSTANTINE MOTAL / File
By ROSE BRENNAN & MICHAEL HINMAN

Not even two months into the hybrid learning program of New York City's public schools, and coronavirus has seemingly won again.

Positivity rates have hit 3 percent on a weekly rolling average, and as promised, Mayor Bill de Blasio has closed physical school campuses beginning today. When they will open again is anyone's guess, but with the kind of holidays coming that seem to demand larger crowds, it won't be anytime soon.

The decision to close first came from schools chancellor Richard Carranza around 2 p.m., near the end of the school day itself. He mass-emailed public school principals, sharing with them what many felt had been inevitable for the past several days.

“Last summer, as we prepared to open our school buildings for in-person learning, we established a threshold of 3 percent COVID-19 test positivity rate for the city, using a seven-day rolling average as a trigger for closing our school buildings,” Carranza wrote. “The city has now reached this threshold of positivity citywide, and, as a result, the DOE will temporarily close down all public schools for in-person learning Thursday.”

“We spent some time confirming it (and) double-checking it, because it is exactly on the number of three point zero-zero percent,” de Blasio said. “No one is happy about this decision. We all, in fact, are feeling very sad about this decision, because so much good work has been put into keeping the schools open.”

de Blasio and Carranza say they are both committed to returning students to their school buildings as soon as possible. And there is a much different backdrop to this school closure compared to the first one last March. Both Pfizer and Moderna are in the middle of promising clinical trials for potential vaccines, which could potentially bring this pandemic to a close early next year.

“As much as we are unhappy today that this moment was reached, we are resolved to keep fighting,” de Blasio said. “That’s what New Yorkers do. And we will overcome this moment.”

Other city leaders also were ready to fight, but not exactly in the same way. City council Speaker Corey Johnson, for example, called the news of the closures a "devastating moment for New York City."

"Through the council's oversight, we know that remote learning is failing many of our most vulnerable students, including special education students — those who live in homeless shelters, and those from low-income neighborhoods," Johnson said in a written statement Wednesday. "We also know that many students do not have the devices they need for remote learning, while others are waiting on Wi-Fi. This was unacceptable in the hybrid learning model, and catastrophic now that we are going fully remote."

Johnson called on de Blasio to immediately present parents with a re-opening plan.

"This has been a disaster for parents and caregivers. The least the least the administration can do is to be honest about what to expect going forward."

"Right now, schools are the safest place for kids to be," Cabrera said, in a release. "The transmission inside schools has been low, while outside of schools, the rate is rising. In spite of this data, our schools are closing while indoor dining is allowed to continue, and gyms remain open. Being out of school will put more kids at risk of getting sick, and spreading the virus to family members — especially in households were living conditions are crowded."

Gov. Andrew Cuomo, in his own briefing on Monday, appeared to be taken by surprise about the news to close the city's schools, but defended the system which de Blasio and Carranza based the decision upon.

"We went through a very formal process where I said, 'Consult with the parents, make them part of it, have web chats, have webinars,' because you can't just by fiat say the schools open or the schools close," Cuomo said. "It only works if parents are willing to send the children, so make it an inclusive, collective process.

"That 3 percent, the mayor set — in my opinion — in a collaborative with the parents. And that was the agreement, and the agreement should be honored."

Although Cuomo says he's backing de Blasio's decision, state Sen. Alessandra Biaggi told her constituents in a newsletter later Wednesday that having de Blasio and Cuomo out of sync is creating "great concern and confusion for our families."

"Families deserve clear communication and advance notice to plan ahead at the very least," Biaggi said. "It is especially frustrating that the mayor and governor are willing to stop in-person learning before closing indoor dining and non-essential businesses, despite clear evidence that school buildings are not a major source of infection due to the hard work of teachers and staff.

"Ensuring that students can continue to receive a high-quality education should be a priority."