Crime is up in the 50th, but not the violent kind 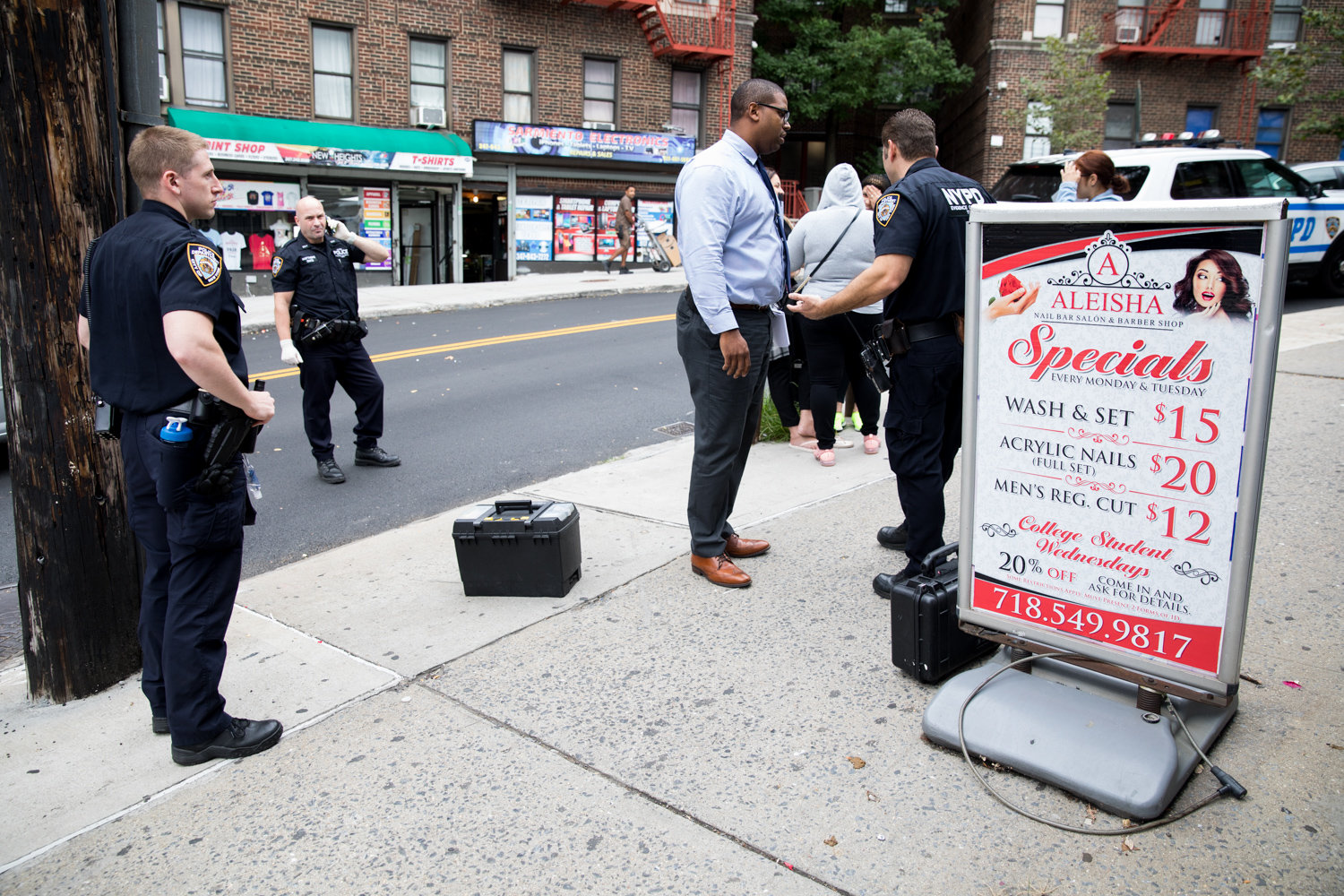 Police officers and detectives respond to a string of burglaries at three businesses on West 238th Street near Bailey Avenue last September. The 50th Precinct saw a slight uptick in crimes last year, but some of the more violent kinds of crime like murder and gun-related incidents actually fell.
JULIUS CONSTANTINE MOTAL / File 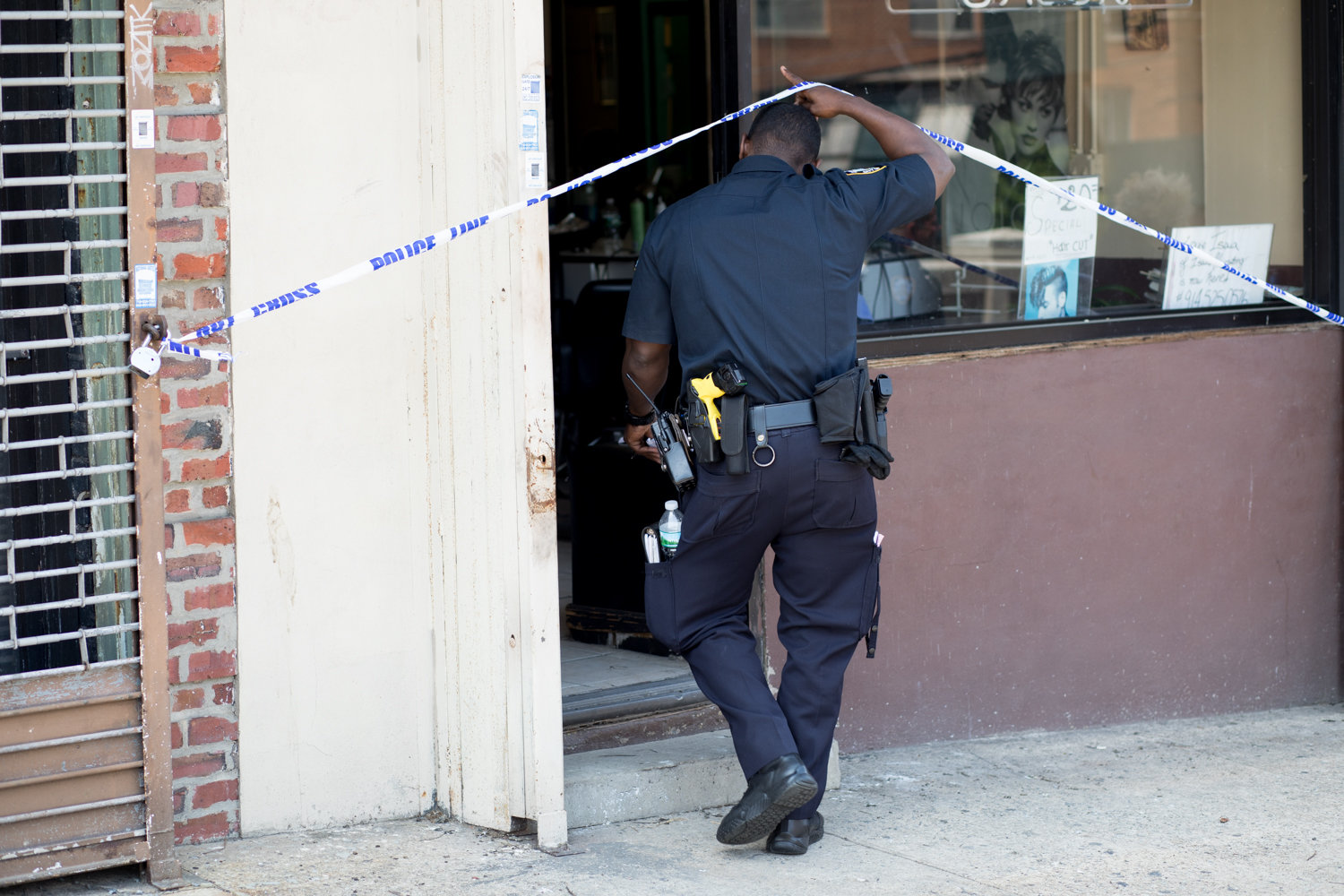 A police officer walks into Park Terrace Unisex Salon on Riverdale Avenue, one of three businesses targeted by a robber in June 2018. The 50th Precinct saw a slight uptick in crimes last year compared to what ultimately became a busy 2018, but murder and gun-related incidents actually fell.
JULIUS CONSTANTINE MOTAL / File 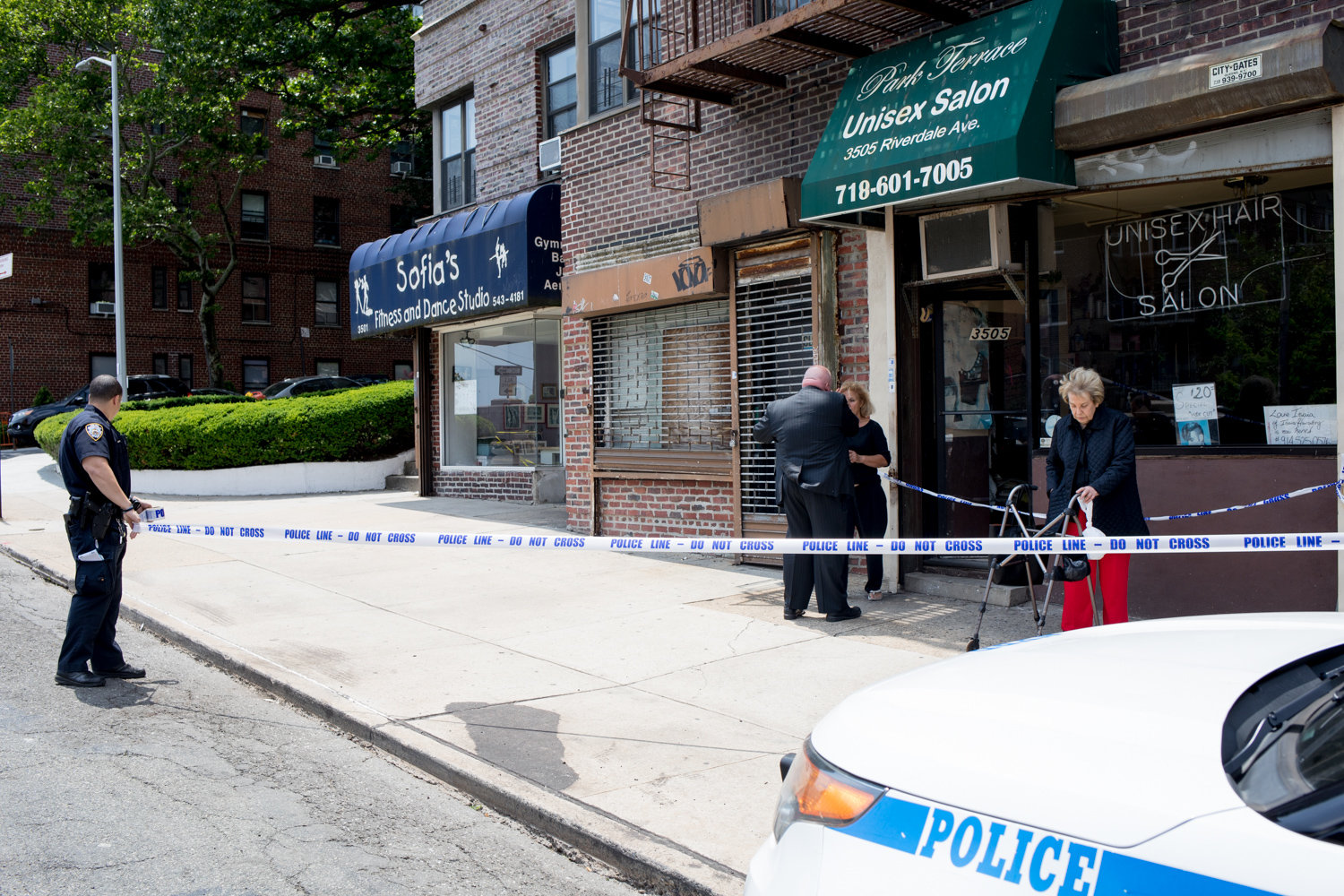 A police officer sets up a perimeter around the Park Terrace Unisex Salon on Riverdale Avenue during a robbery investigation in June 2018. Crime in the 50th Precinct climbed slightly last year compared to what ultimately became a very busy 2018.
JULIUS CONSTANTINE MOTAL / File 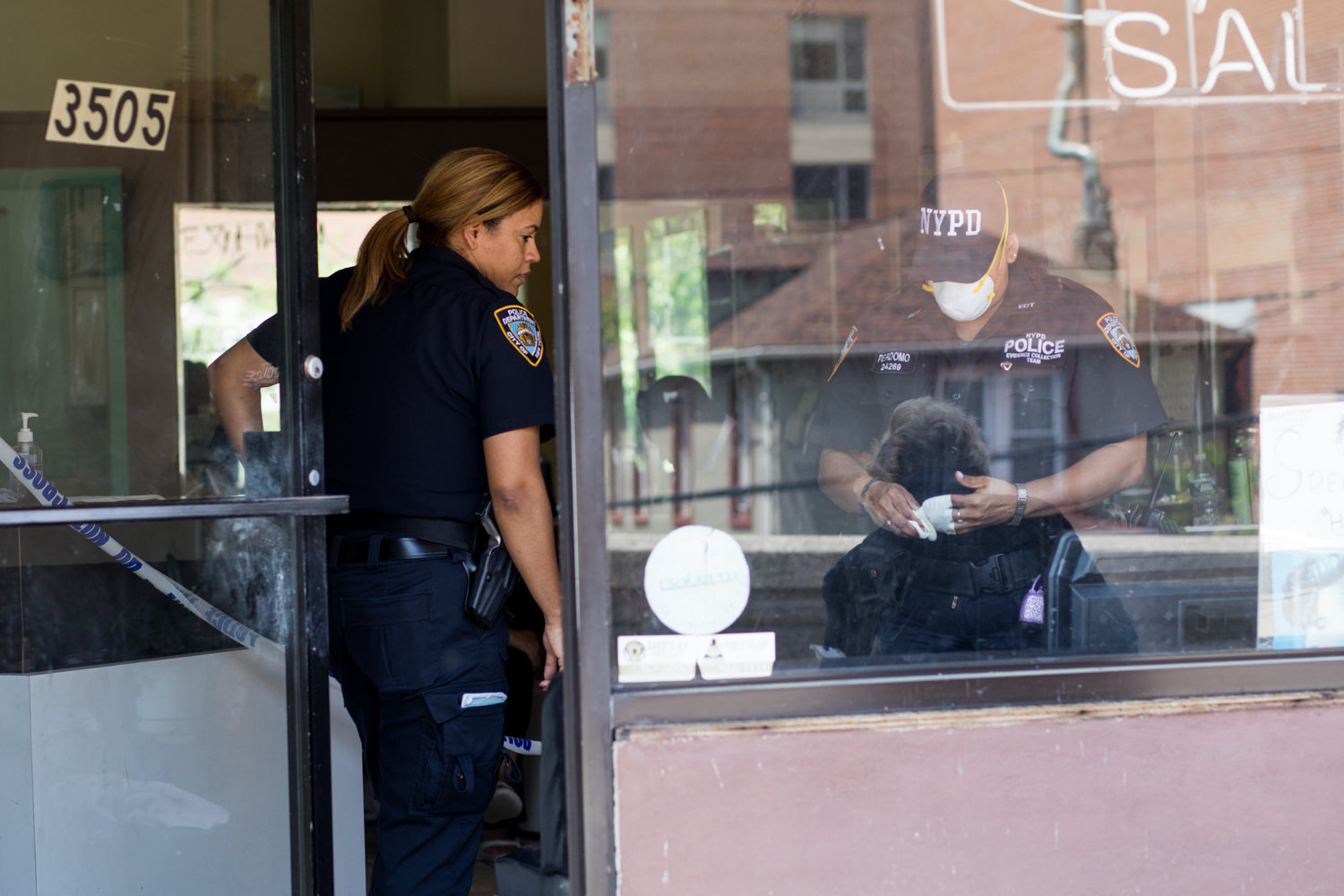 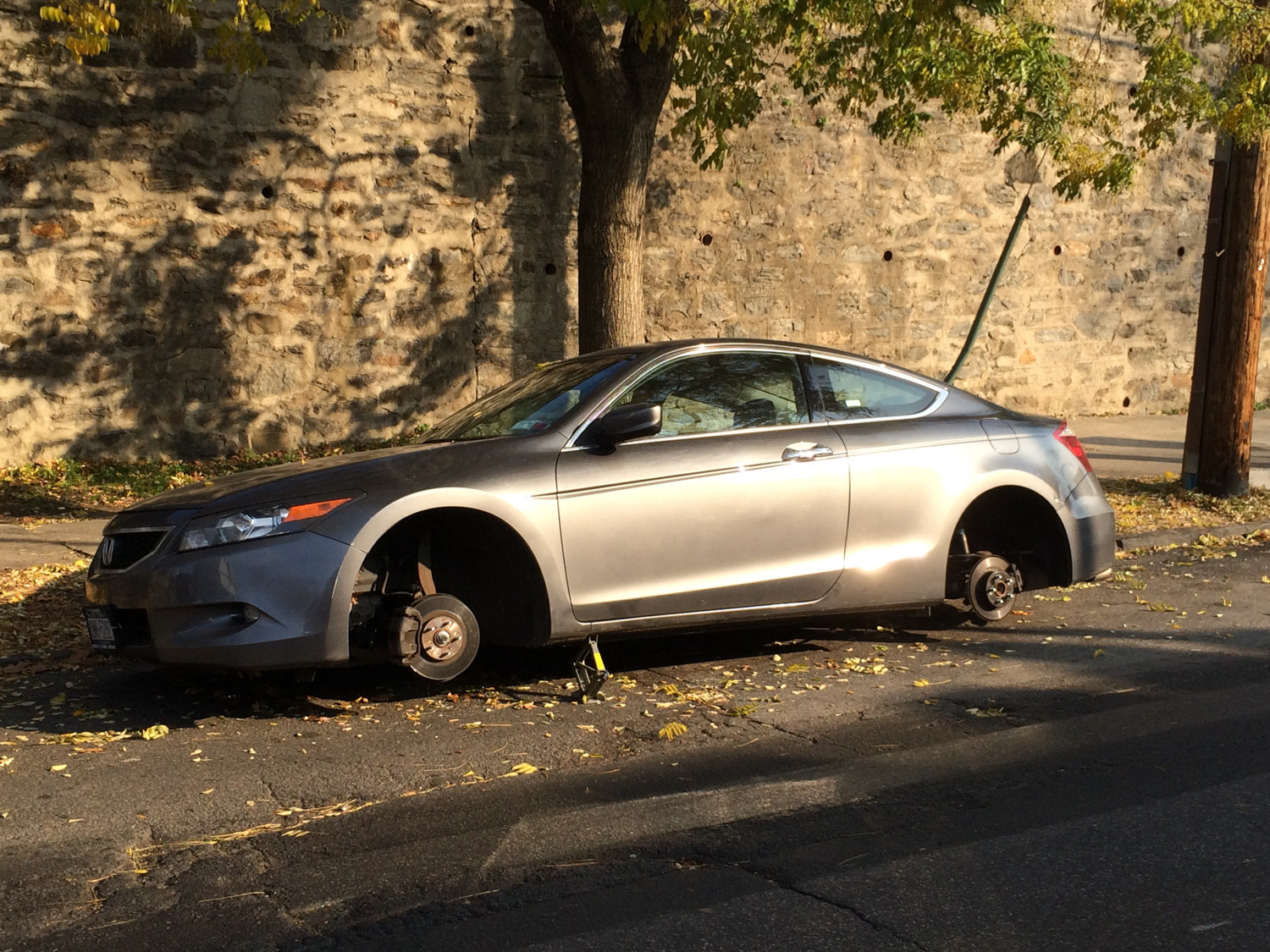 Crimes against vehicles can be some of the hardest police officers try to solve, as such crimes are quick, easy, and there are plenty of targets available to thieves out on the street.
File photo courtesy of Brad Treb
Previous Next
By ANTHONY CAPOTE

Ever since the New York Police Department first began publishing weekly crime statistics reports from every single precinct in the early 1990s, analyzing such data has almost evolved into a kind of sport.

But at least it’s been a positive sport to watch, thanks to the decades-long drop in crime throughout the city since about that same time, which everyone from social scientists to politicians to documentarian Morgan Spurlock has (unsuccessfully) tried to explain.

Looking at how northwest Bronx’s own 50th Precinct stacked up in 2019, it appears at first glance that not much changed from the year before.

The 1.6-percent increase does not tell the whole story, though, not least because the 2019 figures fall within the standard deviation — or “margin of error,” as one might hear pollsters call between now and November — of the 5-0’s statistics going as far back as 2006.

In English, that roughly translates to the fact that crime is so low in the 50th — and has been for so long — that unless annual crime totals were to suddenly jump by 50 incidents, any change in the number of crimes occurring from one year to the next is considered statistically insignificant. Some might say it’s equally as informative to learn it’s rained more often on Wednesdays than it did Mondays last year.

That being said, there are some solid highlights in this year’s crime statistics as well as a few key problem points, as 50th Precinct commanding officer Capt. Emilio Melendez points out.

“You look at what we did here last year, that should really resonate with the residents here,” Melendez said. “Is the very low numbers with regards for violence. Violent crime — even though it still exists — is not the biggest concern.”

But the most important highlight the 5-0 commander had from 2019 was the effort from his officers, who he said had done incredible work investigating and solving the cases that fell in their laps. The total number of arrests for the seven major crimes in 2019, according to Melendez, was 890, or just more than 92 percent of all open cases in the precinct.

The captain had a hard time hiding his pride for those under his command as he spoke about their arrest numbers, crediting his officers for working the streets “proactively and aggressively.”

“That’s my patrol personnel making these arrests,” Melendez said. “That is the Monday through Sunday from midnight to the following midnight, my boys and girls out there every day just looking at the conditions, and not only taking the reports, but doing something about it.”

Melendez didn’t want to read too much into statistics, though.

“My job is not to look at the numbers,” he said. “If I lived on the numbers, I probably wouldn’t get any sleep at night.”

He did point out some of the major problems his precinct faced this past year, especially where older residents and computers intersect.

“Cybercrimes,” Melendez said. “We have elderly people living in this command … (who) are being fleeced out of their savings by people who are pretending to be somebody else over the phone or over the computer.”

The problem with attacking cybercrime, Melendez points out, is it doesn’t work quite like street crime. Police trying to close down open-air drug markets can simply patrol trouble spots in their neighborhoods. But there is virtually no way of predicting when, where or how a scammer will target any given individual.

Another tough-to-tackle crime that seems to thrive in the northwest Bronx, Melendez said, is car accessory theft, an umbrella term essentially referring not just to car break-ins, but parts being stolen right off those cars. This includes rims, tires, side view mirrors and catalytic converters.

What makes car accessory thefts so hard for police is the ease with which the crooks can sell or break down parts for money without being traced.

“It’s a very lucrative crime. It’s one of those very few crimes that actually does pay off,” Melendez said. “You’re stealing four tires and rims — those are things that you can easily sell. Same thing with catalytic converters, mirrors and airbags.”

Of the 500 grand larceny cases in the 50th Precinct last year, a third were either cyber scams or car accessory thefts, Melendez said.

But there are some things investigators can do, and Melendez plans to give it even more attention in 2020: Mail fishing. The captain recently spoke with the U.S. Postal Service, who he said promised they would replace and update mailboxes throughout the neighborhoods beginning later this year.

“We do have troubled youth in the 5-0 precinct,” Melendez said. “It’s a very small group of kids, but we need to save them because they are going down a path that eventually the dividends of what they are doing is going to be felt throughout the command.”