Cuomo: Schools will reopen, but only under specific conditions 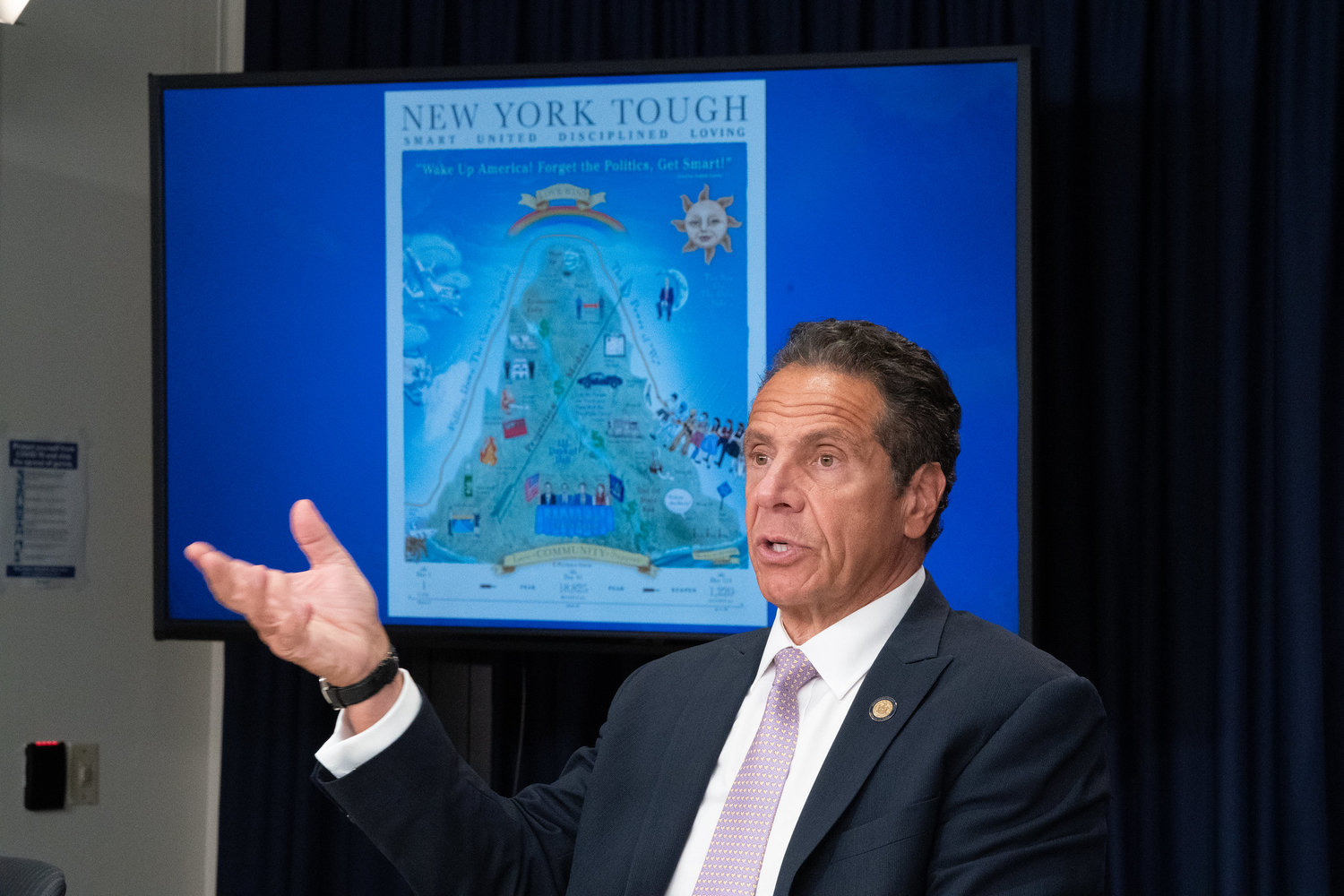 Gov. Andrew Cuomo is ready to let schools reopen in the fall, but only if they are in regions where the coronavirus outbreak is well under control.
Courtesy of Gov. Andrew Cuomo's Office
By MICHAEL HINMAN

New York has seemingly been on the opposite side of whatever the rest of the country is experiencing when it comes to the coronavirus pandemic. When the country was mostly minimally scarred from the virus, New York was the epicenter.

But now that the rest of the country is fighting back the disease, New York is back at levels it hasn't seen since early March — a time that public schools were still open.

The question in New York — and in most other parts of the country, albeit quite prematurely — is if, and when, schools will reopen in the fall. There are many obstacles to allowing students back into classrooms, to the point it might be better safe than sorry. At the same time, Gov. Andrew Cuomo has made it clear the economy in the state cannot fully restart until kids are back on campus, giving parents an opportunity to works jobs they otherwise wouldn't.

In that respect, Monday's news from Cuomo would be good — schools can indeed reopen in the fall. But only if that region is so far on the right side of fighting the coronavirus that it's practically a non-factor.

"We're not going to use our children as guinea pigs," Cuomo said during a news conference on Monday. "I am making a determination over whether or not I send my daughter to school. If it's safe, I send her. If it's not safe, I'm not going to send her. And you can determine that by science."

That science, Cuomo said, is exactly the same science used to reopen the state's economy: Look at the numbers, keep the numbers under control, and life can once again return to some semblance of normalcy.

Schools in a region won't be able to reopen unless that region is in the fourth and final stage of reopening by the first week of August, and has an infection rate of less than 5 percent over a 14-day period.

"That means the virus is under control," Cuomo said. "That means it's safe to reopen, and then schools can proceed to reopening in that region."

If all regions remain on their current schedule, New York City will be the last to enter Phase IV on July 20, well ahead of the state's cutoff date. The number of positive cases across the state have hovered around 1 percent, counting the number of daily cases in the hundreds. That's a far cry from Florida, which reported 15,300 new confirmed cases on Sunday — a new record not just for that state, but for any state, including New York at its worst.

Still, following the lead of President Donald Trump, Florida and other hard-hit states are openly considering reopening schools in the fall as well, despite health officials desperately warning otherwise. U.S. Secretary of Education Betsy DeVos has said the number of children who could die from the virus by returning to the school was small, although critics have said putting even one child in harm's way is more than should be allowed.

"We test more, we have more data than any other state," Cuomo said. "Look at the data. If you have the virus under control, reopen. If you don't have the virus under control, then you can't reopen, right? We are not going to use our children as a litmus test, and we're not going to put our children in a place where their health is endangered. It is that simple."

Trump has demanded schools reopen across the country in the fall, threatening to pull federal aid if they don't. Cuomo, along with other governors, maintain the decision whether to open or not open schools is a state right, not a federal one. And even if he did want to pull federal funding, it wouldn't have the authority to do so.

In fact, Cuomo has dumped all the blame for the country's current state with the pandemic — with 3.3 million positive cases and more than 135,000 deaths — all at Trump's feet. In fact, he worries New York will see a second wave of sorts, primarily because of how out-of-control virus spread is in most other states.

"The first federal debacle was losing track of the virus that was supposed to be in China, and not knowing that it left China and went to Europe, and then came here from Europe," Cuomo said. "It was one of the greatest federal blunders in history, and cost thousands of lives in New York and billions of dollars. They just missed it, and it was a terrible miss."

The second mistake from the White House came from pushing states to reopen before they should, the governor added.

The 15,300 cases reported in Florida on Sunday is about the same level as all of New York's positive cases combined in the past month. Between June 17 and July 12, New York has reported just over 15,700 positive cases after testing more than 1.1 million people, according to state health department data.

If schools are allowed to reopen, they will have to follow specific guidelines, including mandatory use of face masks whenever social distancing cannot be maintained. Masks are also strongly recommended at all times, except for meals and classroom instruction — even with social distancing.

School districts will be allowed to require face coverings, even during instruction, in communities with higher infection rates.

Masks also would be required on all school buses, as well as maintained social distance.

Schools will immediately shut down, however, if the seven-day infection rate climbs above 9 percent.

"If the infection rate goes over 9 percent on a seven-day average, then that means the virus is moving rapidly, and it is not intelligent to open," Cuomo said.

School districts — including New York City's education department — will still be required to submit school reopening plans to the state ahead of the academic year start for approval.

In the meantime, Cuomo warns against complacency in light of solid numbers from the state, including in New York City, where he said enforcement of measures to control the spread of the coronavirus have become lax.

"I never said there was nothing to worry about. I worry every day."