Candidates say ‘no thank you’ to petitioning, but they have no choice, ultimately 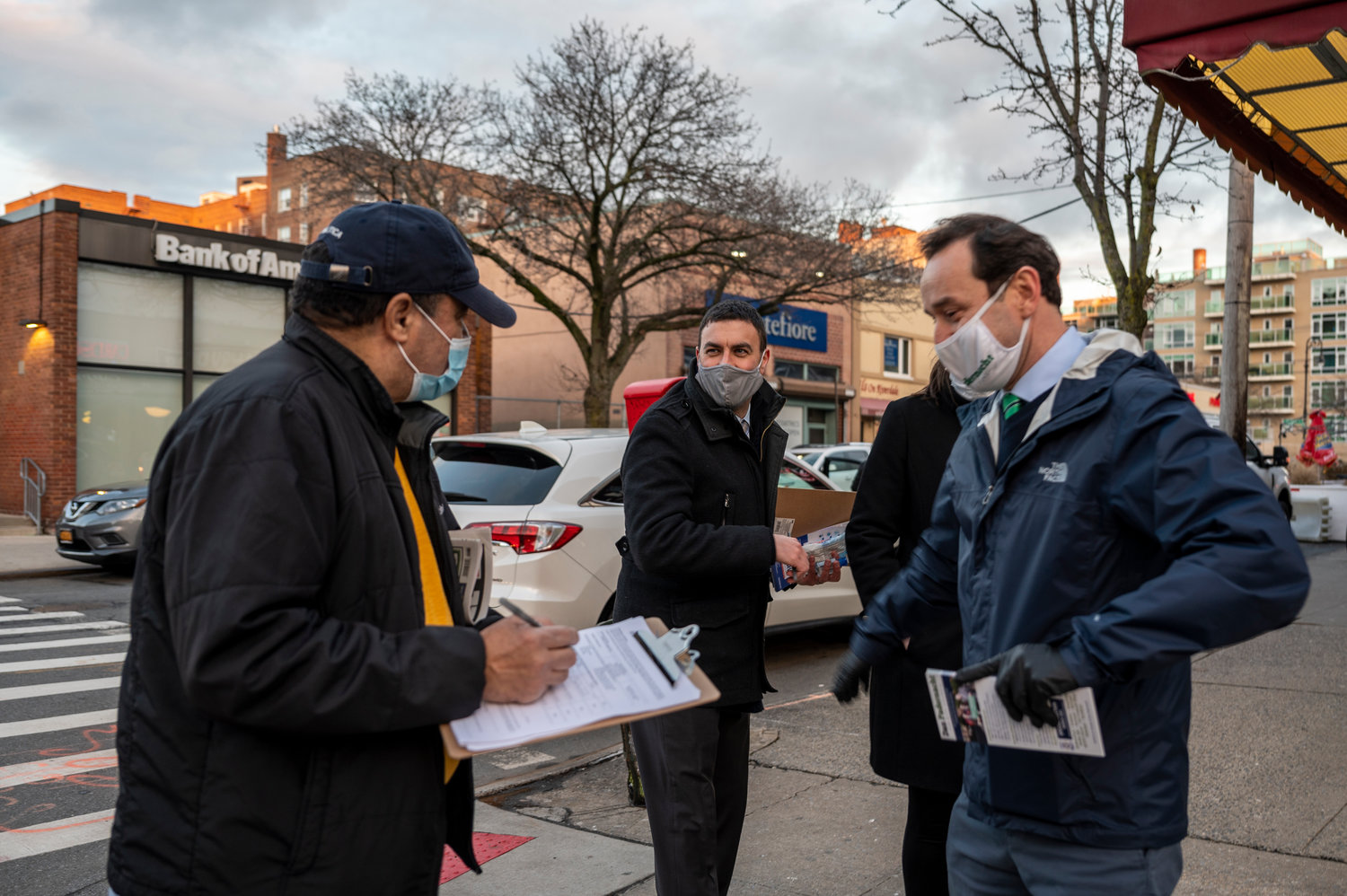 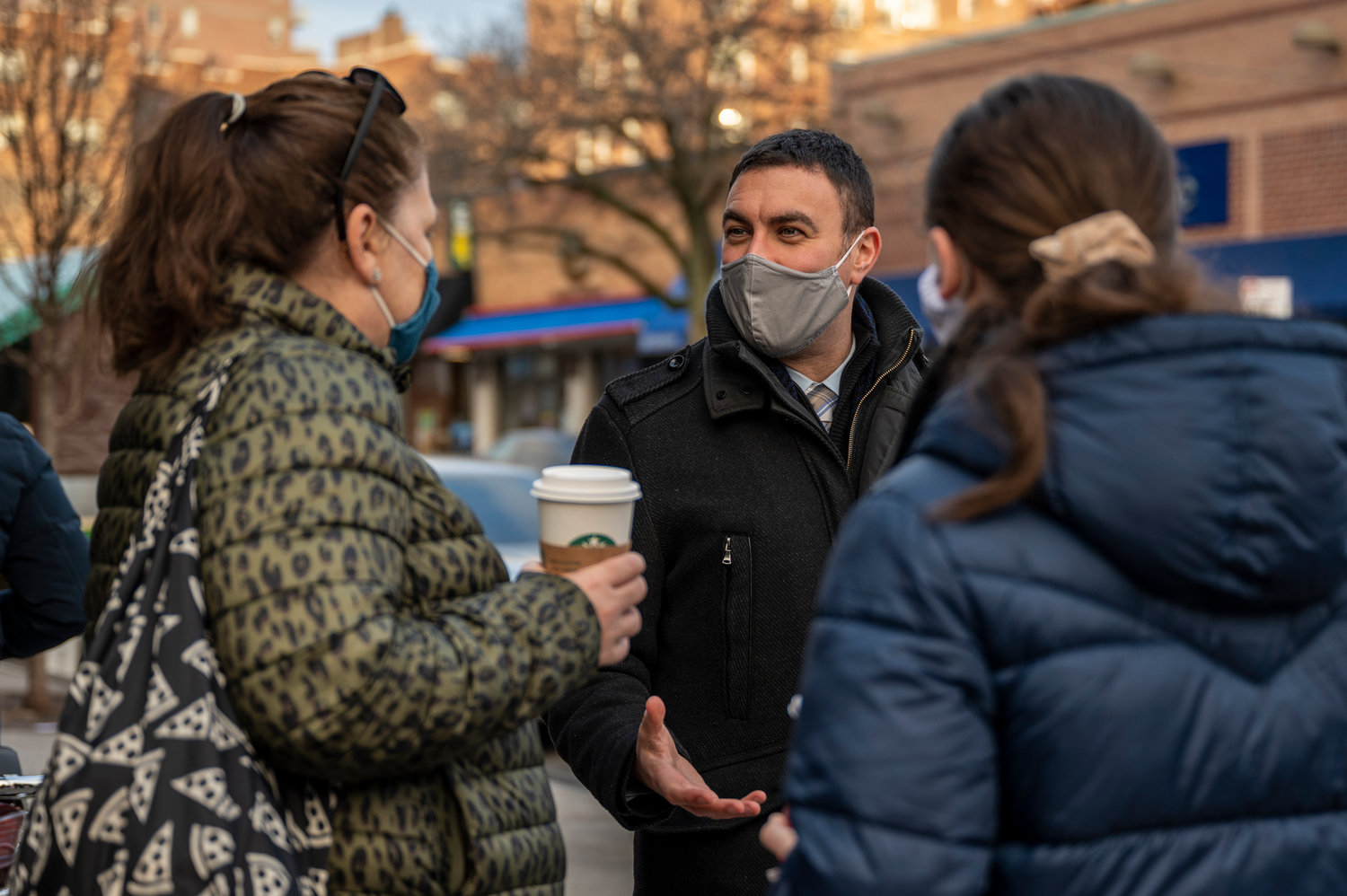 Eric Dinowitz talks to passers-by about his experience as an educator on the first day of petitioning for the March 23 city council special election race. Dinowitz — fresh with the volunteer support he’ll get with a Ben Franklin Club endorsement — didn’t join Dan Padernacht and other candidates in the race calling for a suspension of petitioning requirements in the wake of the coronavirus pandemic. But he is for lowering the signature threshold.
HIRAM ALEJANDRO DURÁN 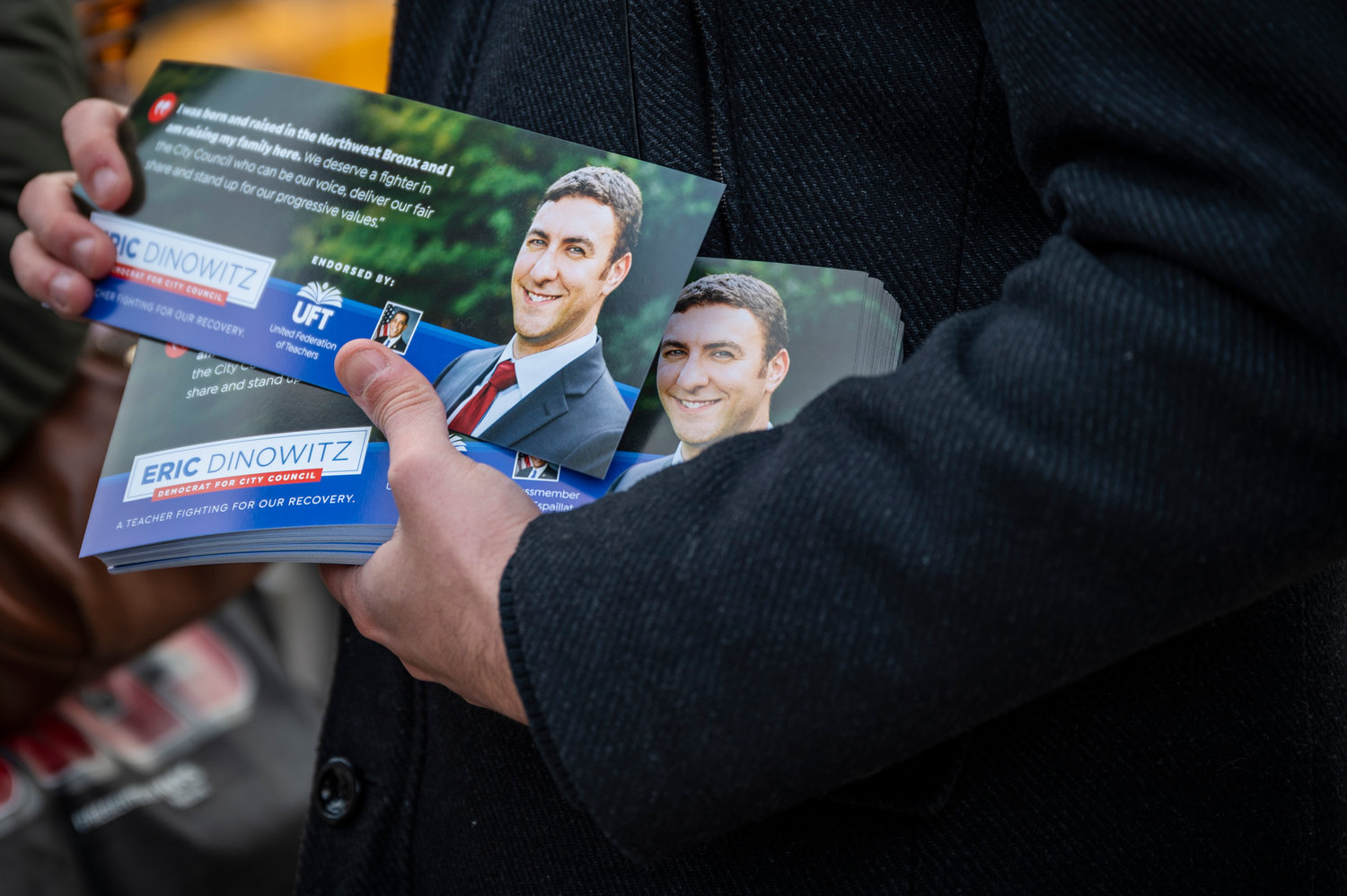 The first day of petition for Eric Dinowitz started off with handing out flyers and collecting signatures at the corner of West 235th Street and Johnson Avenue on Monday. Despite the ongoing coronavirus pandemic, Dinowitz and other candidates seeking to succeed Andrew Cohen on the city council, need 450 valid signatures to get their names on the March 23 ballot.
HIRAM ALEJANDRO DURÁN 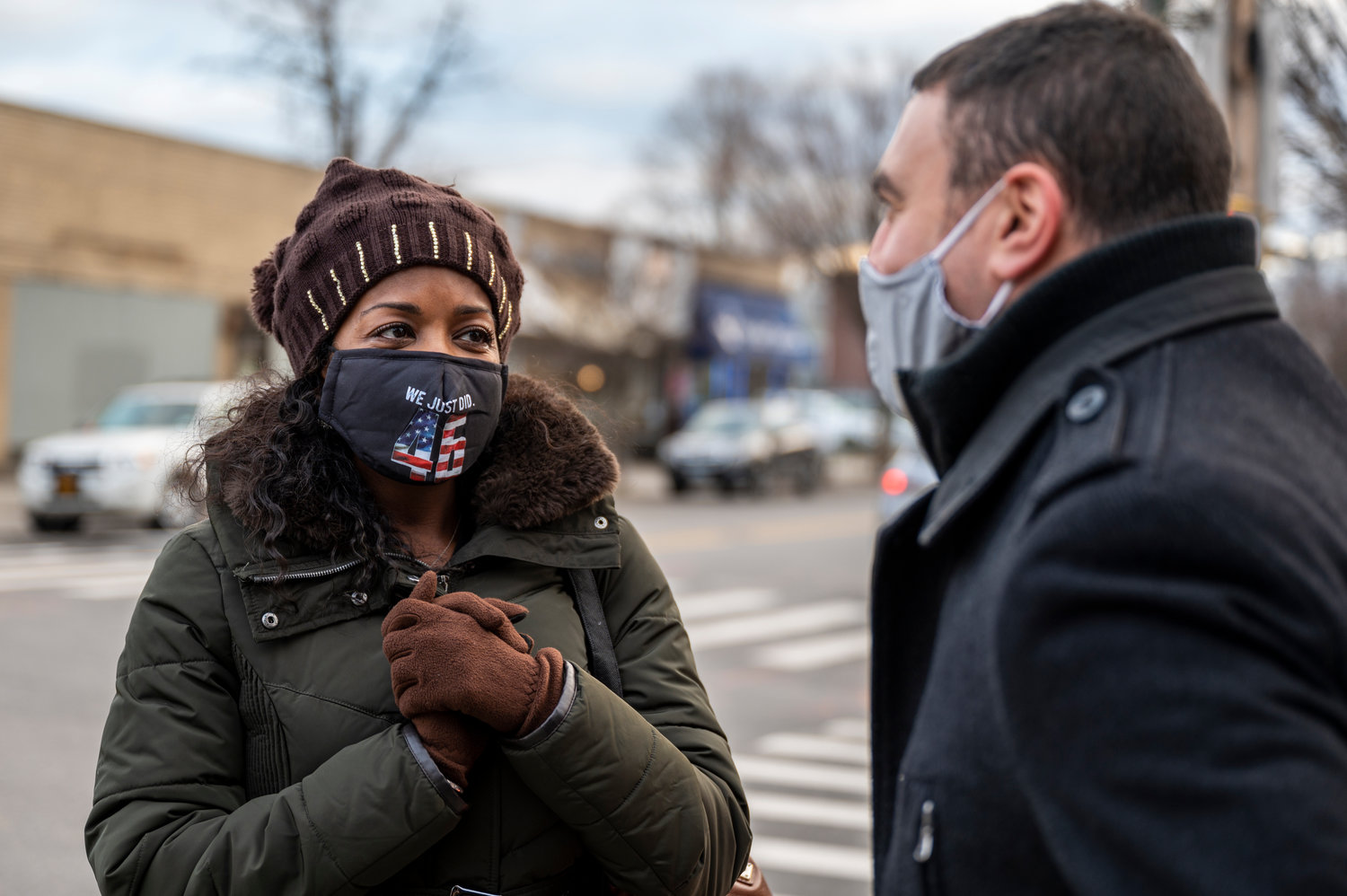 With a special election now set for March 23, city council candidates were out in force Monday petitioning to get their names on the ballot. That included Eric Dinowitz, son of Assemblyman Jeffrey Dinowitz, who collected signatures and spoke with potential constituents on Johnson Avenue. While Dinowitz supports lowering the number of signatures needed to get on the ballot during the coronavirus pandemic, he did not join fellow candidates to temporarily waive the signature requirement altogether.
HIRAM ALEJANDRO DURÃN 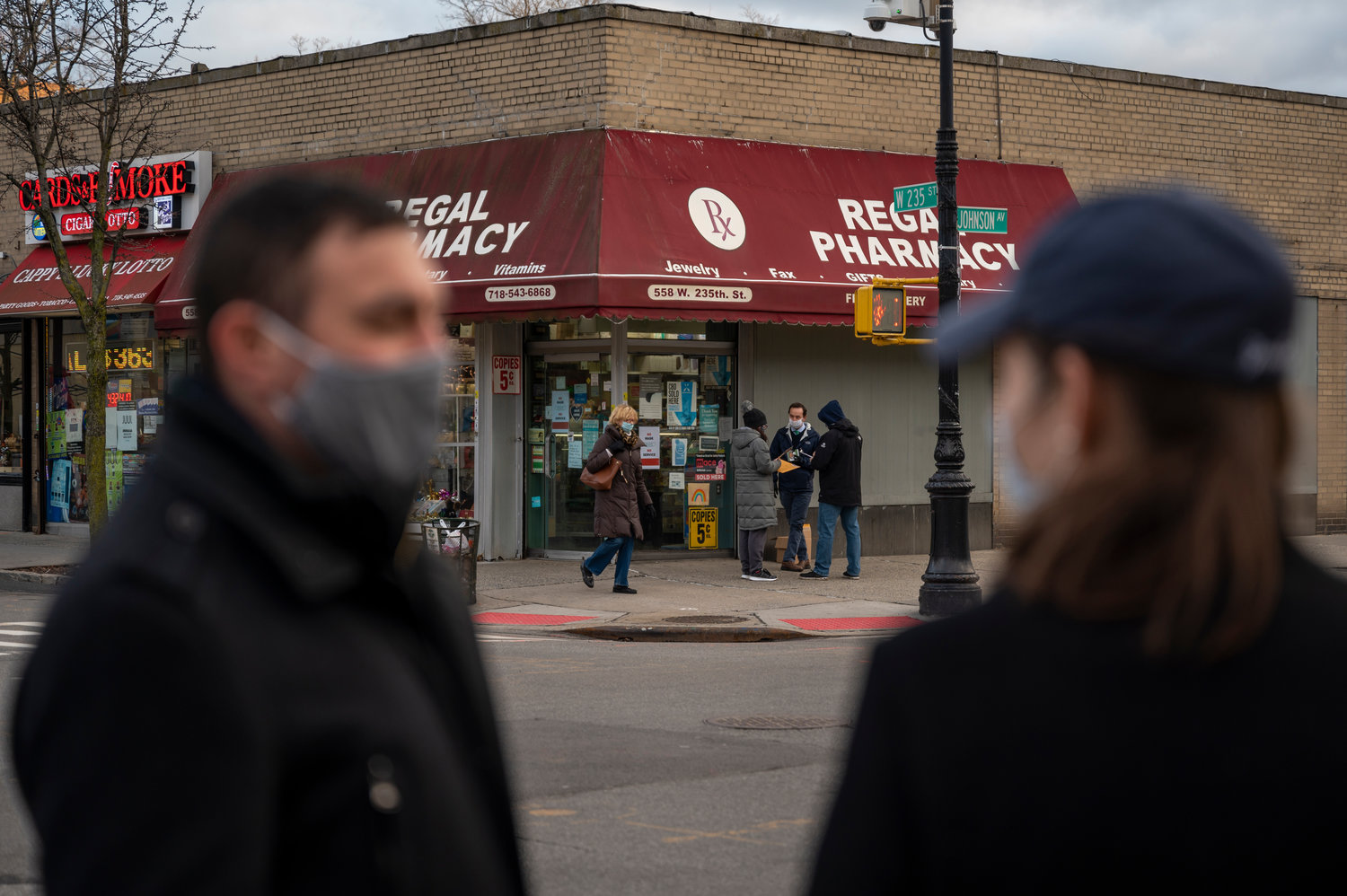 Dan Padernacht collects signatures at the corner of West 235th Street and Johnson Avenue on Monday — not far from one of his competitors, Eric Dinowitz. Paderacht called on the state to waive the special election petitioning requirement in the wake of the coronavirus pandemic, something Dinowitz did not sign on to support.
HIRAM ALEJANDRO DURÁN 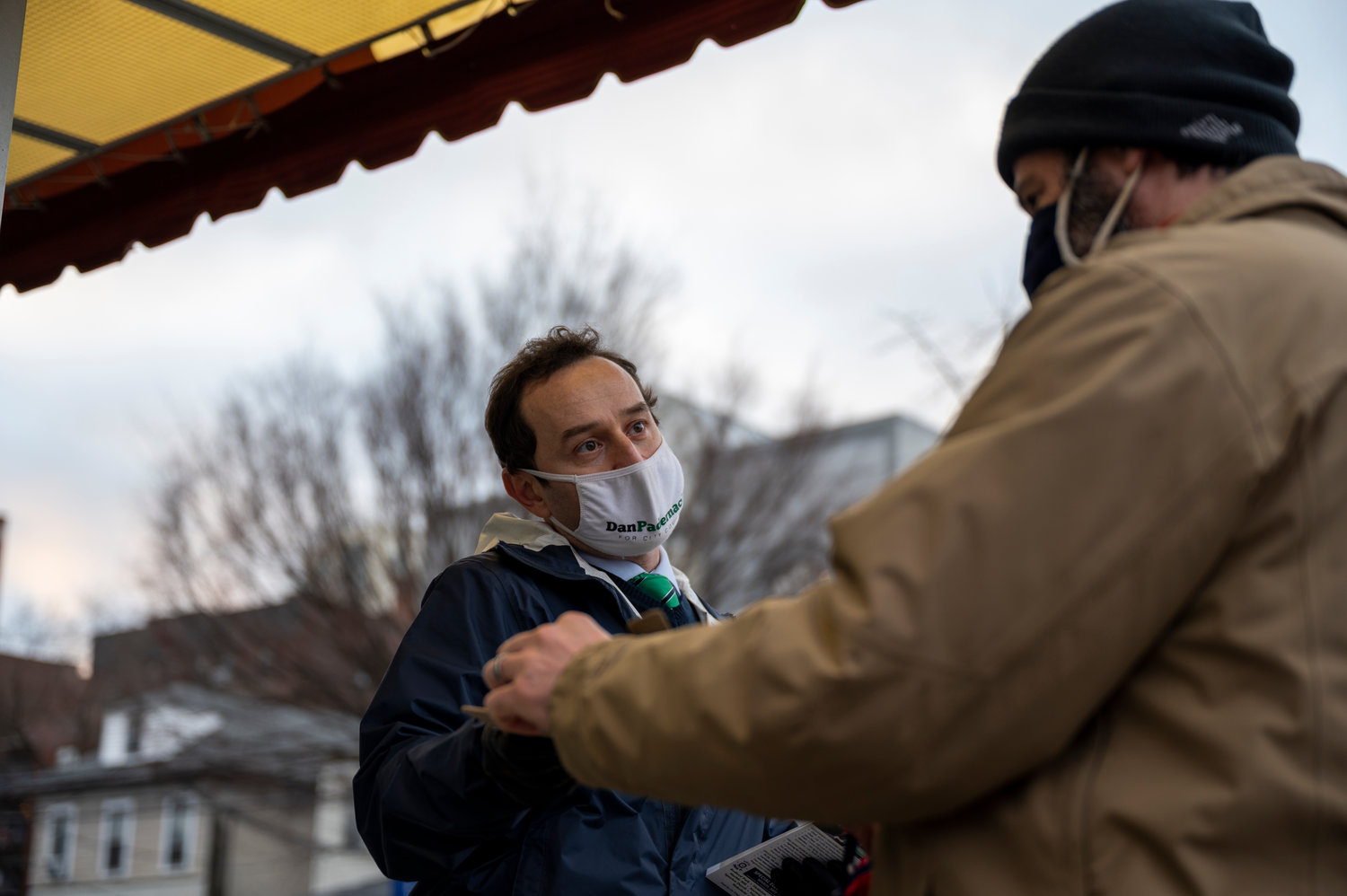 Dan Padernacht collects signatures at the corner of West 235th Street and Johnson Avenue on Monday — not far from one of his competitors, Eric Dinowitz. Paderacht called on the state to waive the special election petitioning requirement in the wake of the coronavirus pandemic, something Dinowitz did not sign on to support.
HIRAM ALEJANDRO DURÃN 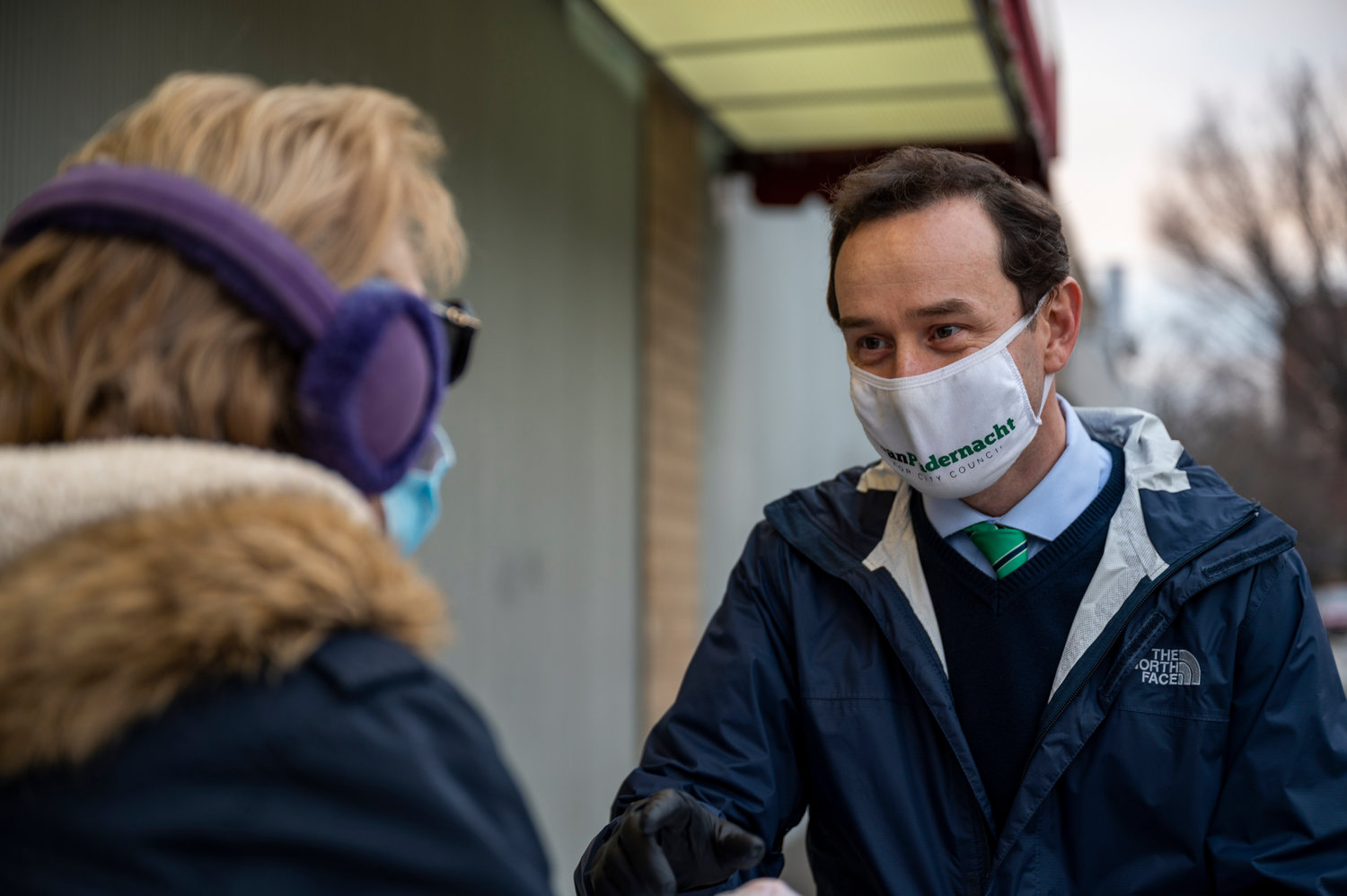 As petitioning got under way Monday for the March 23 special election to replace Councilman Andrew Cohen, Dan Padernacht collects signatures on Johnson Avenue, hoping to get his name on the ballot. He and other candidates need at least 450 valid ones to succeed — an effort they unsuccessfully hoped Gov. Cuomo would save them from during a pandemic.
HIRAM ALEJANDRO DURÃN
Previous Next

There are people who are like, ‘I’ll volunteer, but I just had COVID.’ I mean, I literally called a couple and they said, ‘We always would petition for folks. But we just had COVID. We’re done.’”
— Jessica Haller
By ETHAN STARK-MILLER

Collecting hundreds of signatures is probably one of the last things anyone wants to do during a global pandemic.

Yet that’s exactly what the five remaining candidates seeking to replace Andrew Cohen on the city council must do now that Mayor Bill de Blasio has set March 23 for their special election.

Monday, both Dan Padernacht and Eric Dinowitz were spotted around Johnson Avenue seeking the John Hancocks of 450 registered voters within Cohen’s old council district so they can have their names on that ballot.

Padernacht, a real estate lawyer and former Community Board 8 chair from Kingsbridge Heights, have said such petitioning is dangerous while the coronavirus continues to rage in this part of the city. He joined some of his fellow candidates — absent Dinowitz — last week calling for Gov. Andrew Cuomo to suspend petitioning requirements like he did for elections last year.

Otherwise, Padernacht said, Cuomo and even de Blasio are potentially putting the lives of thousands of volunteers and registered voters at risk.

This new petition drive comes as public health officials say one out of every 200 people in the city has tested positive for SARS-CoV-2, the virus that causes COVID-19. Those same experts are predicting January will be the worst month of the pandemic yet, even with a vaccine slowly making its way around the city.

Abigail Martin, Marcos Sierra and Carlton Berkley joined Padernacht in his plea during a news conference last week. They wanted the petition requirement suspended once again, but it seems the governor wants no part of it. Instead, Padernacht and others have to collect not just 450 signatures, but actually two or three times that many to help their petition survive some of the expected legal challenges filed by other campaigns, and the Democratic party machine itself for its non-favored candidates.

Martin — who on Tuesday dropped out of the special election race with Marcos Sierra — said that between this race and the one to replace new U.S. Rep. Ritchie Torres in the Fordham Heights area — thousands of unnecessary physical contacts will have to be made, which would be any virus’s preferred scenario.

“We know that with some of these vaccines, it takes time in order for people to be fully vaccinated and safe,” Martin said. “We have 12 candidates between District 11 and District 15 running. That’s over 14,000 person-to-person contacts to get enough signatures at the current requirement of 450.”

It’s even more if each candidate is forced to collect as many as 1,000 signatures, as expected.

Yet, even among those candidates calling on the governor to intervene, there are some slight differences of opinion on what that intervention should entail.

“The required petitioning will result in thousands of person-to-person contacts at a time when COVID infection rates are rising,” Padernacht said.

He also backs more permanent legislation, like the kind introduced by Councilman Ben Kallos — who represents the Upper East Side — that would waive the petitioning requirement for any candidate who also qualifies for matching campaign funds from the city. To get those extra dollars, candidates must receive at least 75 individual donations of $10 each from voters living within their district, and $5,000 from donors in the city at large.

It’s the kind of measure many other states use in elections, Padernacht said — instituting a minimum fundraising requirement to show a candidate has serious enough support to warrant a spot on the ballot, without having to collect and verify signatures.

If neither of these ideas gain traction, Padernacht said his last resort is one also supported by Dinowitz — lowering the number of signatures candidates have to collect, thus reducing in-person interactions as much as possible.

The city’s elections board declined to comment, and neither the mayor nor the governor responded to requests.

Jessica Haller wasn’t part of Padernacht’s news conference last week, but told The Riverdale Press she fully agrees there needs to be an alternative to in-person petitioning.

It’s awkward to collect signatures during a pandemic, she said, especially with everyone sharing pens and paper while standing close together — the kinds of activities specifically discouraged by public health officials.

There are “people who are like, ‘I’ll volunteer, but I just had COVID,’” Haller said. “I mean, I literally called a couple and they said, ‘We always would petition for folks. But we just had COVID. We’re done.’”

“There has to be a threshold of someone demonstrating support in the community,” the public school educator said. “I don’t think that that should be based solely on one’s ability to raise money.”

The real priority, Dinowitz said, should be expanding mail-in and early voting for the special elections.

In an op-ed that appeared in the Gotham Gazette just before Christmas, Martin took her ideas a step further, calling for elections to be conducted completely by mail, or even postponed until more people feel safe from the coronavirus.

Delaying the election would mean longer periods some districts, like Cohen’s, would be without any representation at City Hall. That means Martin’s suggestion doesn’t have much support among her former peers. Delaying even four to six weeks doesn’t make much sense, Haller said, because it could put the special election in April or May.

“Then why don’t you just wait until June?” Haller said. “Just do it in June, a special and a primary in one ballot.”

One last option the council candidates have is to take Cuomo to court. But that’s not an attractive option, Padernacht said, because the legal process would be cost-prohibitive for candidates like him, limited to about $190,000 in total spending.

“So beginning an expensive legal process, really aside from the amount of time you need — and money,” Padernacht said, “it’s not realistic.”

Thieves working overtime in the 50th