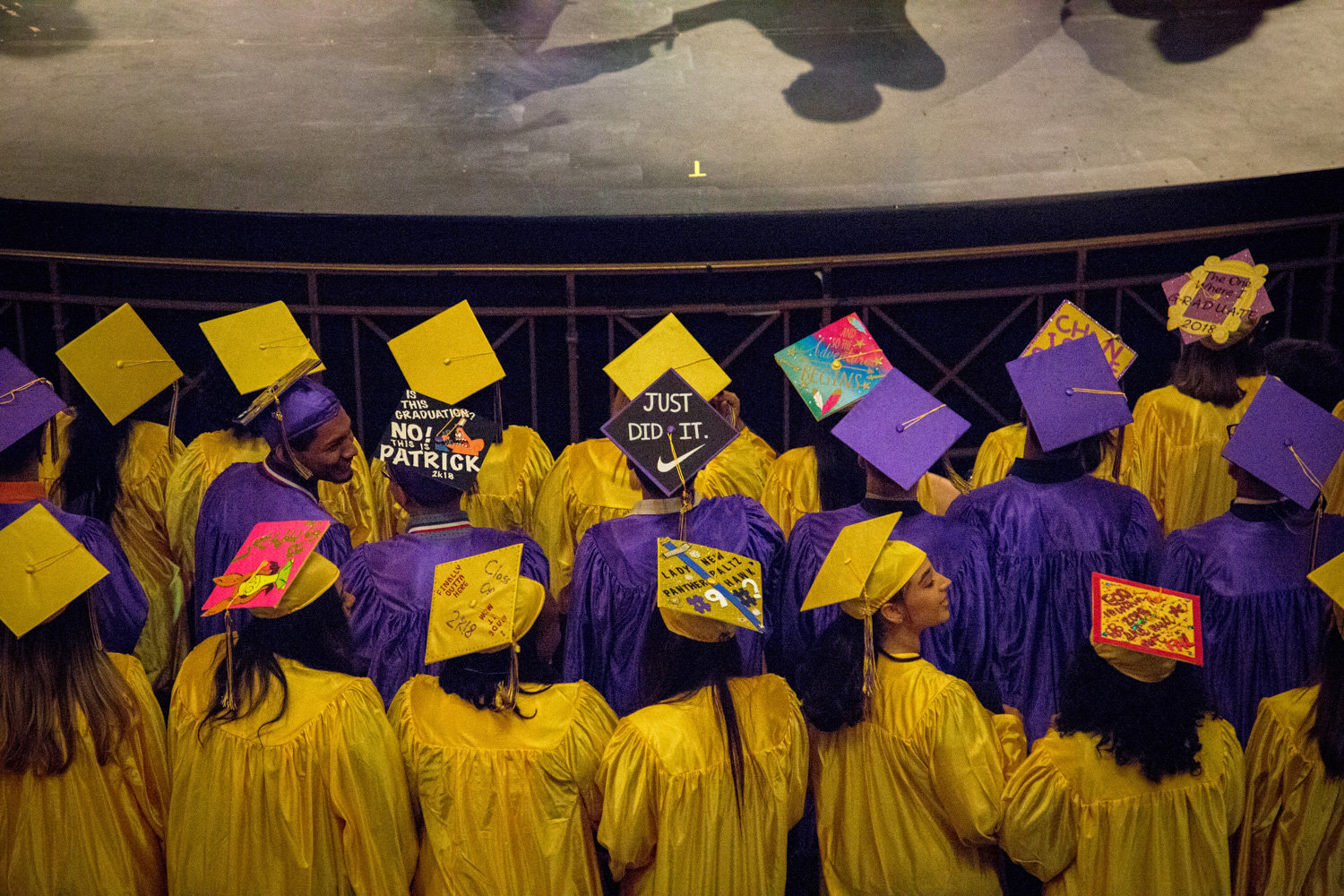 Graduating seniors won’t be able to enjoy the usual rites of passage, like IN-Tech’s 2018 graduation seen here, at least not right now. The city’s education board decided not to allow in-person graduations, though some schools, like the Bronx School of Law and Finance, have opted to slate their ceremonies for later in the year.
EIAN KANTOR / File 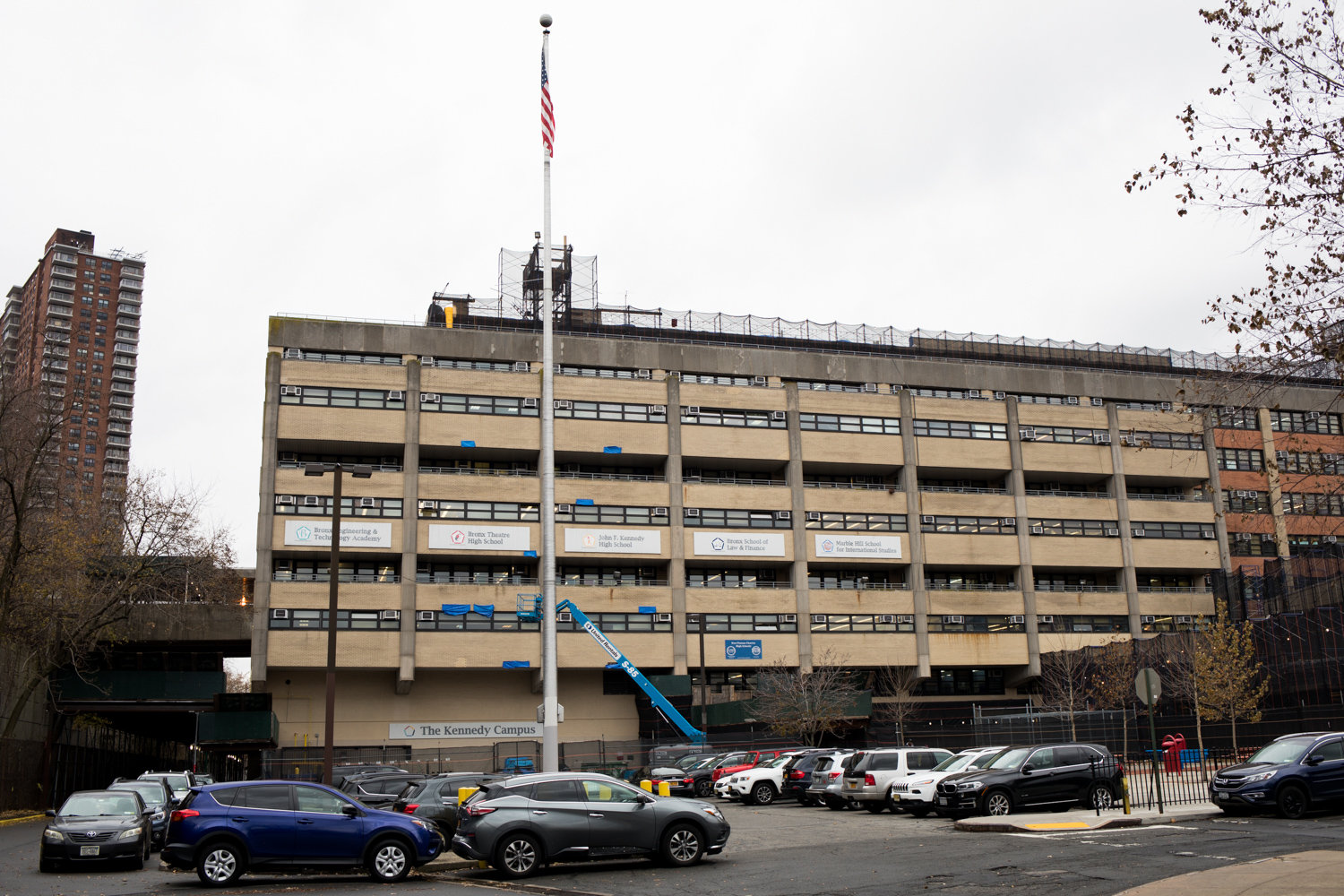 The Bronx School of Law and Finance is opting to hold its graduation ceremony and prom for the class of 2020 later in the year to accommodate its students who can’t enjoy these rights of passage due to the coronavirus pandemic.
JULIUS CONSTANTINE MOTAL / File 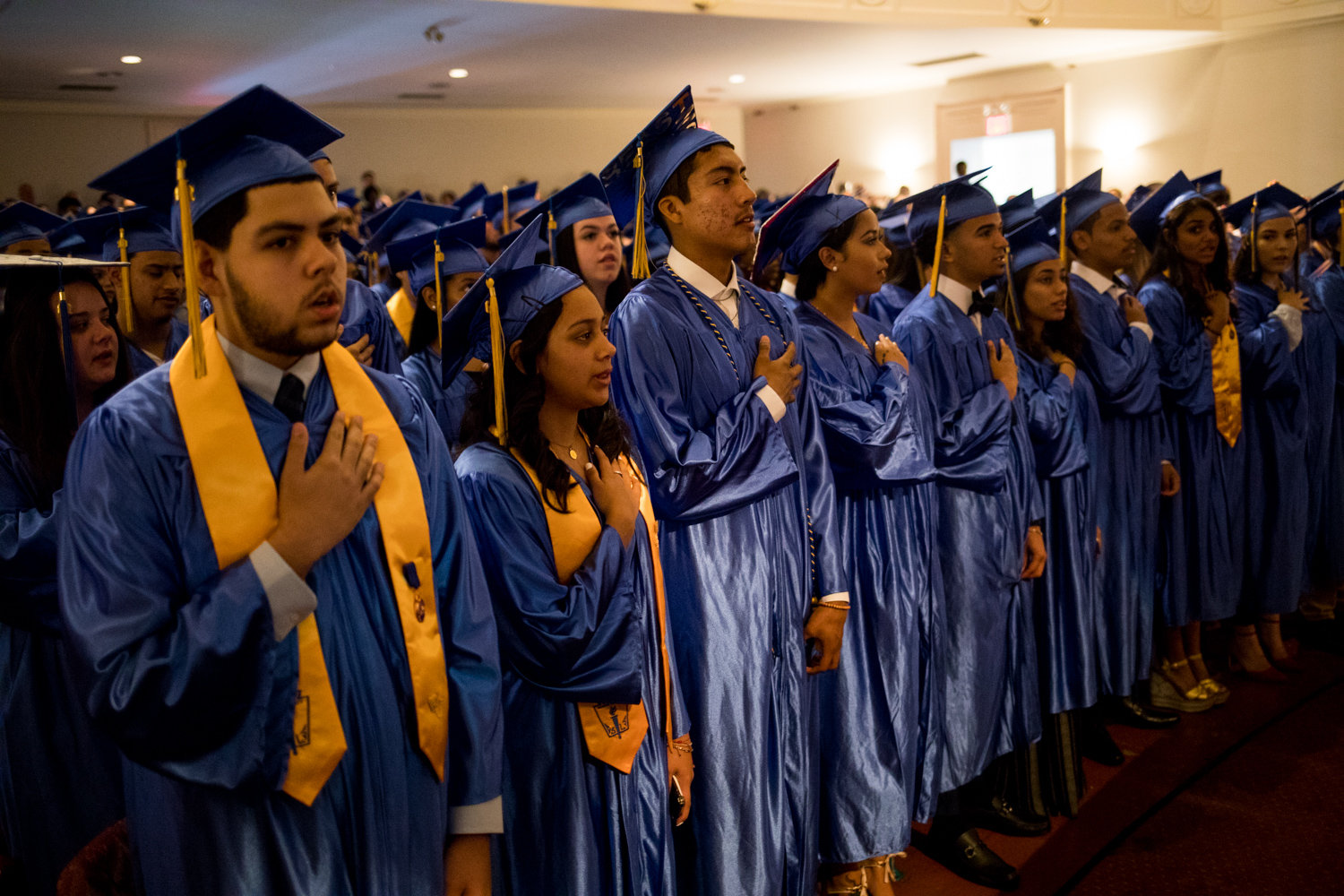 Graduation is taking on a new form this year due to the coronavirus pandemic, with many schools holding their ceremonies virtually. Others, like the Bronx School of Law and Finance, have opted to slate their ceremonies for later in the year.
JULIUS CONSTANTINE MOTAL / File
Previous Next
By PATRICK LINDO

May and June are typically when students don caps and gowns, making the stride to accept their high school diplomas in front of their families and friends during their commencement ceremonies.

But with a coronavirus pandemic still very much a part of people’s daily lives, the thought of hosting such ceremonies could spell serious jeopardy for everyone involved, and anyone they might come into contact with after.

Luckily, significant progress in recovering from the pandemic has been made in the past weeks, and the state has begun reopening. Because the infection and hospitalization rates continue to drop in the state, Gov. Andrew Cuomo gave permission for limited, outdoor, socially distanced graduation ceremonies that can start as early as June 26.

“Schools need to plan with the progress we’ve made so far,” Cuomo said during what had been his daily coronavirus briefings earlier this month.

The announcement came with a cautionary warning that the decision could change based upon those very statistics that are keeping the state open in the first place. If all continues on that downward trend, the city could be preparing for not only a third phase of reopening, but keeping the prospect of outdoor graduations alive.

Despite the enticing results and progress, though, there is doubt and concerns over the safety of in-person graduations. The city’s education department expressed that doubt by deciding against Cuomo’s decision, forbidding in-person ceremonies. In a review and evaluation in conjunction with the city’s health department, the DOE determined such ceremonies were simply too dangerous to even attempt.

“And we understand the pain of being unable to come together and celebrate.”

Styer did however note that alternative solutions and means of conducting ceremonies are being actively encouraged and supported. Those include virtual commencements — which have been the standard alternative — and car parade or drive-thru/drive-in graduations, like one held recently by St. Margaret of Cortona School.

Jessica Goring agreed with the DOE’s decision. However, the Bronx High School of Law and Finance principal lamented on the Class of 2020 missing out on so much, such as the chance to say goodbye, as well as senior events and awards.

“Graduation,” Goring said, “is the final milestone that our seniors don’t get to experience as ‘normal.’”

Bronx Law was still expected to conduct a virtual ceremony, Goring said, making the event as personal for students as possible on their original graduation date. Additionally, the city itself plans to host a virtual event celebrating the entire Class of 2020.

“It is kind of upsetting,” said Jady Rodriguez, a graduating senior, who won’t get to receive her diploma in-person.

Like her friends, classmates, Rodriguez says she spent four years looking forward to that special day. But the pandemic wiped it all away.

Goring has reserved time and space for a potential commencement ceremony in November during Thanksgiving break. As schools and colleges will be closed for the holiday during that time, Goring hopes to gather her graduating seniors during their time off, when some are home from dorms, for a chance to shake hands — or bump elbows — with administrators, or maybe even dance the night away at a prom.

For Rodriguez, it’s a “glimmer of hope.” She’s heading to Albany for college and hopes to be back home during a time the pandemic will have died down enough to enjoy the day.

“Our seniors — and seniors all over the country — might feel like they’re forgotten,” Goring said. “But I hope that they realize that, instead, they’re held in the hearts and hopes of millions — well beyond just family and faculty — waiting for them to finally get their much-deserved celebration.”