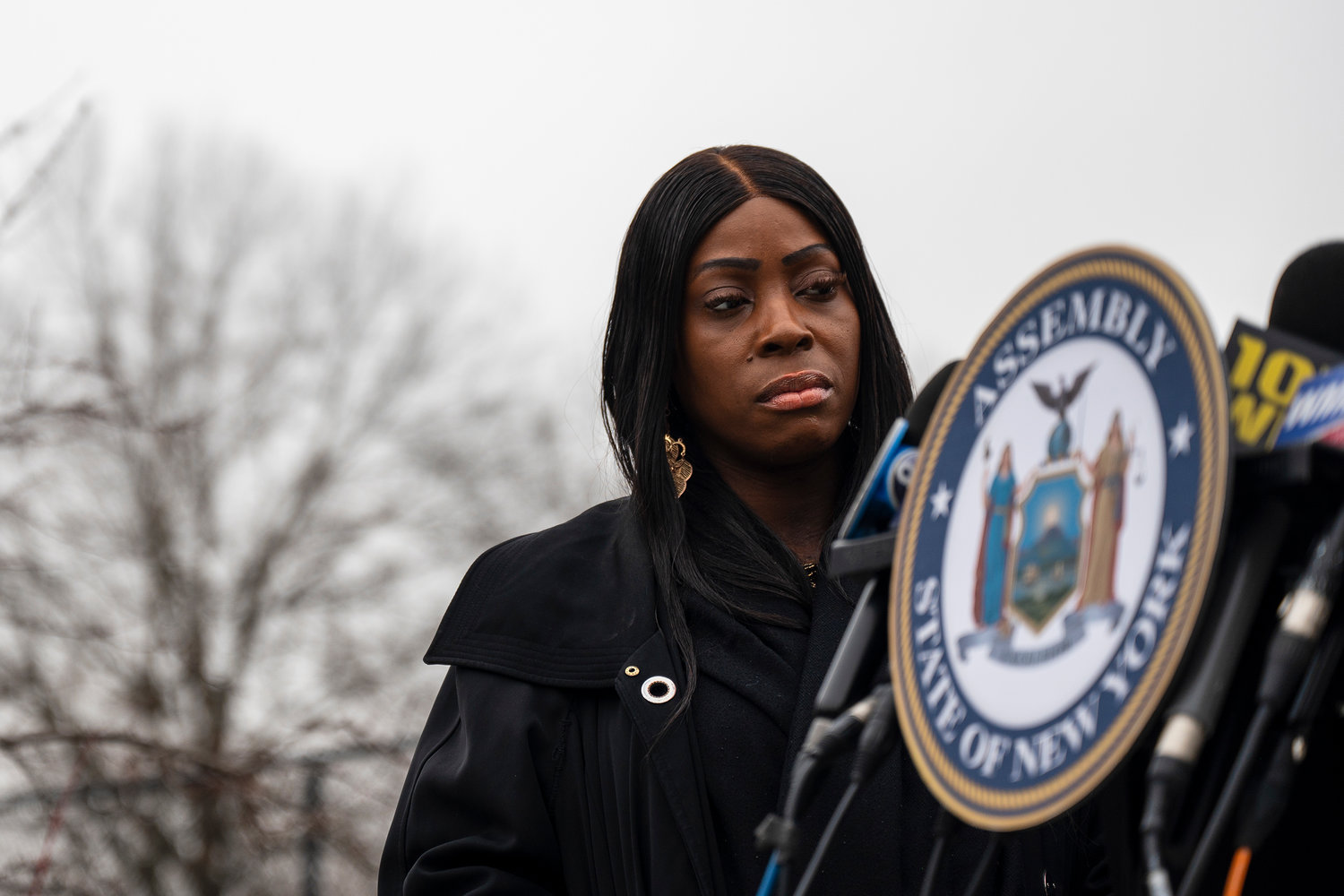 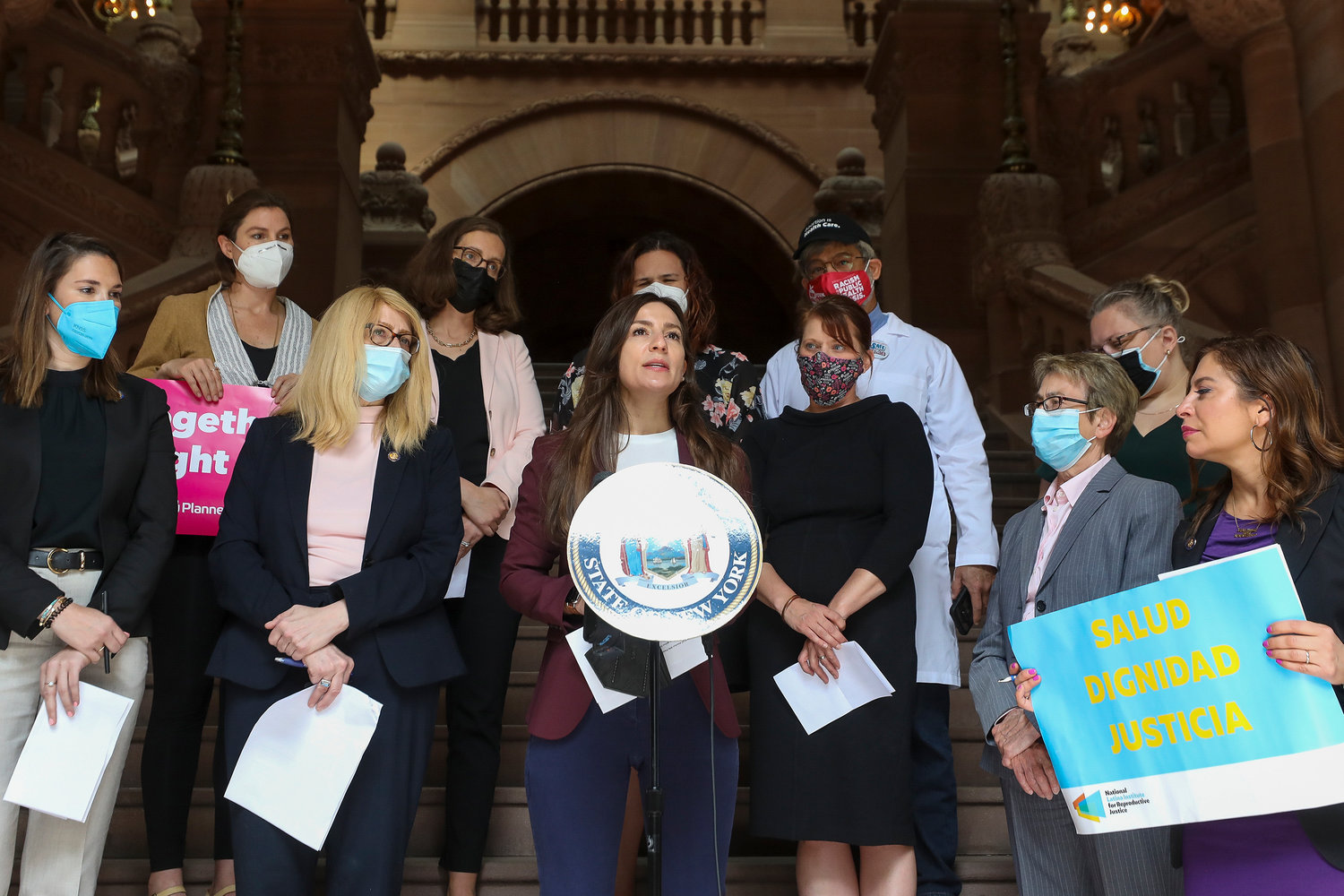 With just nine words the majority of the U.S. Supreme Court on June 24 threw out the 50-year-old Roe v. Wade decision that made abortion a constitutional right. “The Constitution does not confer a right to abortion,” the decision read.

“Roe and Casey (Planned Parenthood of Southeastern Pennsylvania vs. Casey) are overruled; and the authority to regulate abortion is returned to the people and their elected representatives,” the decision continued. “The Constitution makes no reference to abortion, and no such right is implicitly protected by any constitutional provision, including the one on which the defenders of Roe and Casey now chiefly rely — the Due Process Clause of the 14th Amendment.”

As would be expected in the heavily Democratic northwest Bronx, most of the reaction from politicians to the Supreme Court decision was disappointment and anger. Statements and press releases poured in from city, county, state and congressional representatives soon after the decision was released. On the other side, there was jubilation from one state organization.

“Just like millions of other women across our nation, I am in a complete state of shock and anger today by the Supreme Court’s decision to overturn decades of progress made to ensure women had a right to access safe reproductive care without government interference,” Bronx borough president Vanessa Gibson said on June 24. “Today’s decision is a fundamental threat to reproductive freedom, bodily autonomy, and to our basic human rights in this country. Shame on this Supreme Court for overturning 50 years of progress in this country.”

State Sen. Alessandra Biaggi, who represents the 34th district and is running for congress, was in shock.

“I am very rarely at a loss for words, but today I nearly am,” Biaggi said. “Let me be clear: Today is a nightmare for our nation. The Supreme Court has made the barbaric decision to overturn Roe v. Wade, the landmark case (that) upheld the right to an abortion in the U.S. for 50 years. The implications of this decision cannot be overstated — abortion will be banned effectively in at least 22 states and give others the green light to enact further restrictions on reproductive care.

“Abortions will not end with this decision, only safe abortions will. Countless women will die as a result of the court’s actions today. And it is Black, Latinx, LGBTQ+, immigrant, young, and poor individuals who will suffer the most.”

She has called upon congress to expand the Supreme Court since she believes the current court “no longer represents the interests of the American people nor can it be trusted to protect our civil liberties and fundamental rights.”

The conservative party of New York state had a different take on the matter.

“Roe v. Wade was a constitutionally flawed decision that never should have been issued,” said New York state Conservative Party chair Gerard Kassar. “Scholars have known that for decades. Today’s Supreme Court ruling simply returns abortion laws to state’s, which always should have maintained purview over this issue.

“Today’s decision is a great victory for those who value unborn life. It’s been 50 years in the making, and the New York State Conservative Party could not be more pleased.”

U.S. Sen. Kirsten Gillibrand pointed out how the decision may be a setback for women in this country, but their fight will not stop.

“Today is a devastating day for all Americans,” the senator said. “Today, more than half of the American population became second-class citizens, stripped of their constitutional right to privacy and bodily autonomy, regardless of where they live.

“But while today’s ruling is a terrible setback in the fight for women’s equality, it does not diminish our resolve. In fact, it is time to get to work and fight for our rights. At the federal level Democrats will fight to eliminate the filibuster and enshrine reproductive freedom into law. At the state level we will work to enact pro-choice legislation and flip legislatures to guarantee reproductive rights for all Americans. And in states like New York where reproductive health care is safe and accessible, we will open our doors to those seeking care.”

“The Supreme Court’s decision to abolish the reproductive rights recognized in Roe and Casey relegates women and others to second class status, delegitimizes the Supreme Court, and erodes our nation’s commitment to the rule of law,” said Rep. Espaillat. “Millions of women in America today lost a fundamental constitutional protection – and the freedom of choice. As Justices (Stephen) Breyer, (Sonia) Sotomayor, and (Elena) Kagan stated in their dissenting opinion, the legitimacy of the Court is earned over time and ‘it can be destroyed much more quickly.’”

“It is unconscionable that on the same week that the Supreme Court overturned New York’s century-long gun law regulating who can carry a concealed handgun, the Supreme Court permits states to regulate a person’s bodily autonomy. It is unimaginable that in our nation as strong as ours, this has been allowed to happen.

He said he is committed to adding Justices to the Supreme Court, and ensuring the fight for reproductive justice continues.”

Closer to home, Councilman Eric Dinowitz and Assemblyman Jeffrey Dinowitz echoed a lot of what their Democratic elected brethren said.

“Even though we knew this was coming, today will go down in history as an egregious reversal of human rights and will result in not only a lack of bodily autonomy, but actual death,” Eric Dinowitz said. “The right-wing, activist, unelected, majority of justices on the Supreme Court have decided that millions of women and birthing people do not have the power to make decisions that will alter the course of their lives.

“Let us be clear, this is not ‘pro-life,’ this is forced birth. We now find ourselves in an unbelievably precarious situation, and terrified for the future of our nation. Abortion is health care. Health care is a basic human right.”

Assemblyman Dinowitz, who has represented greater Riverdale for nearly 30 years, will continue to protect access to abortion and reproductive rights.

“Roe v. Wade had over 50 years of precedence and is broadly supported across the country — Republicans will not stop their attacks on women, on reproductive health care, and on equality here,” he said.

“There is clear hypocrisy at play — just a day after the court struck down New York’s gun regulations, it will allow red states to regulate Americans’ bodies and their health care decisions.”