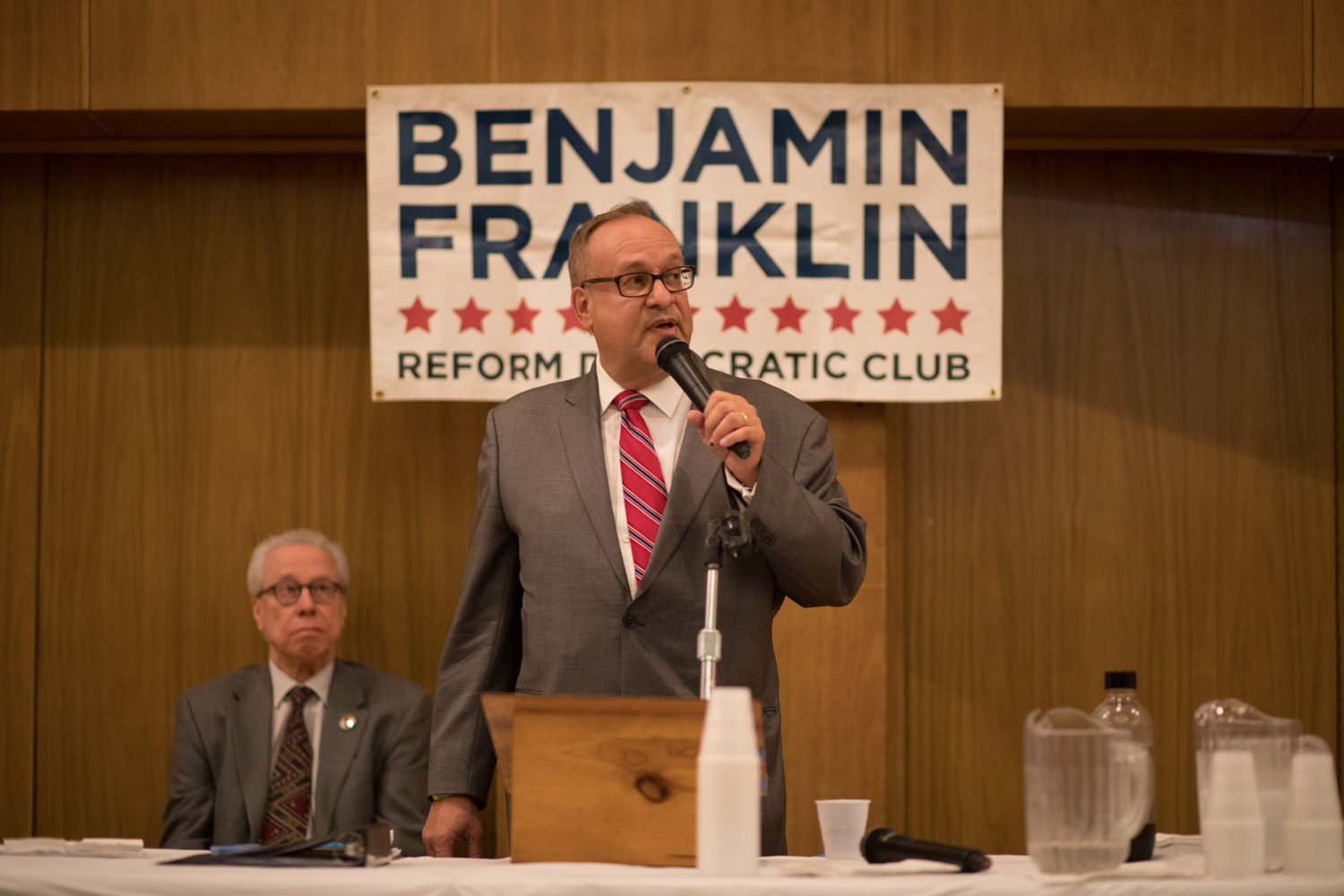 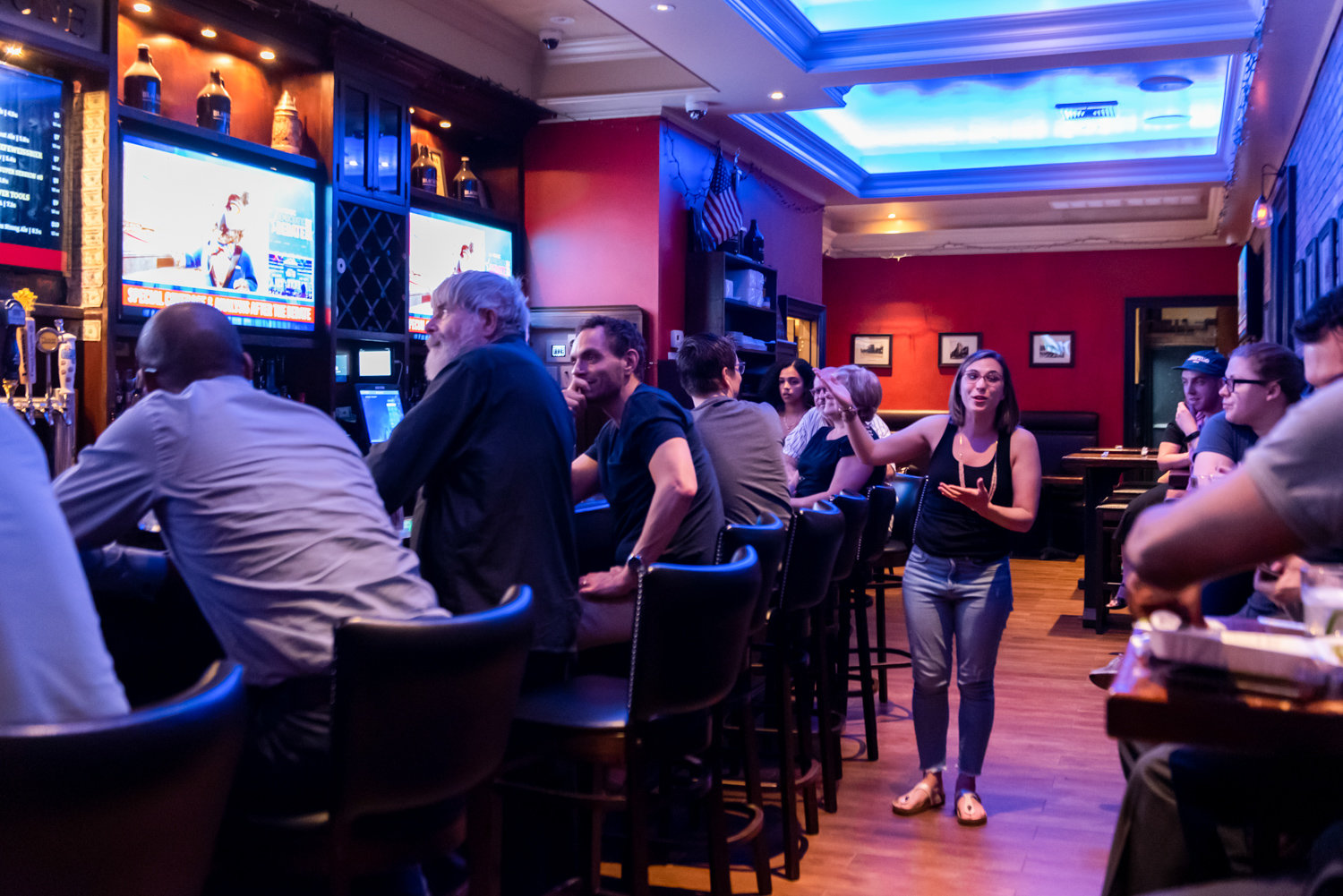 Morgan Evers, center right, is looking to unseat Benjamin Franklin Reform Club president Michael Heller, as well as all of the club’s leadership, with an ‘alternate’ slate of candidates.
FRIDA STERENBERG / File 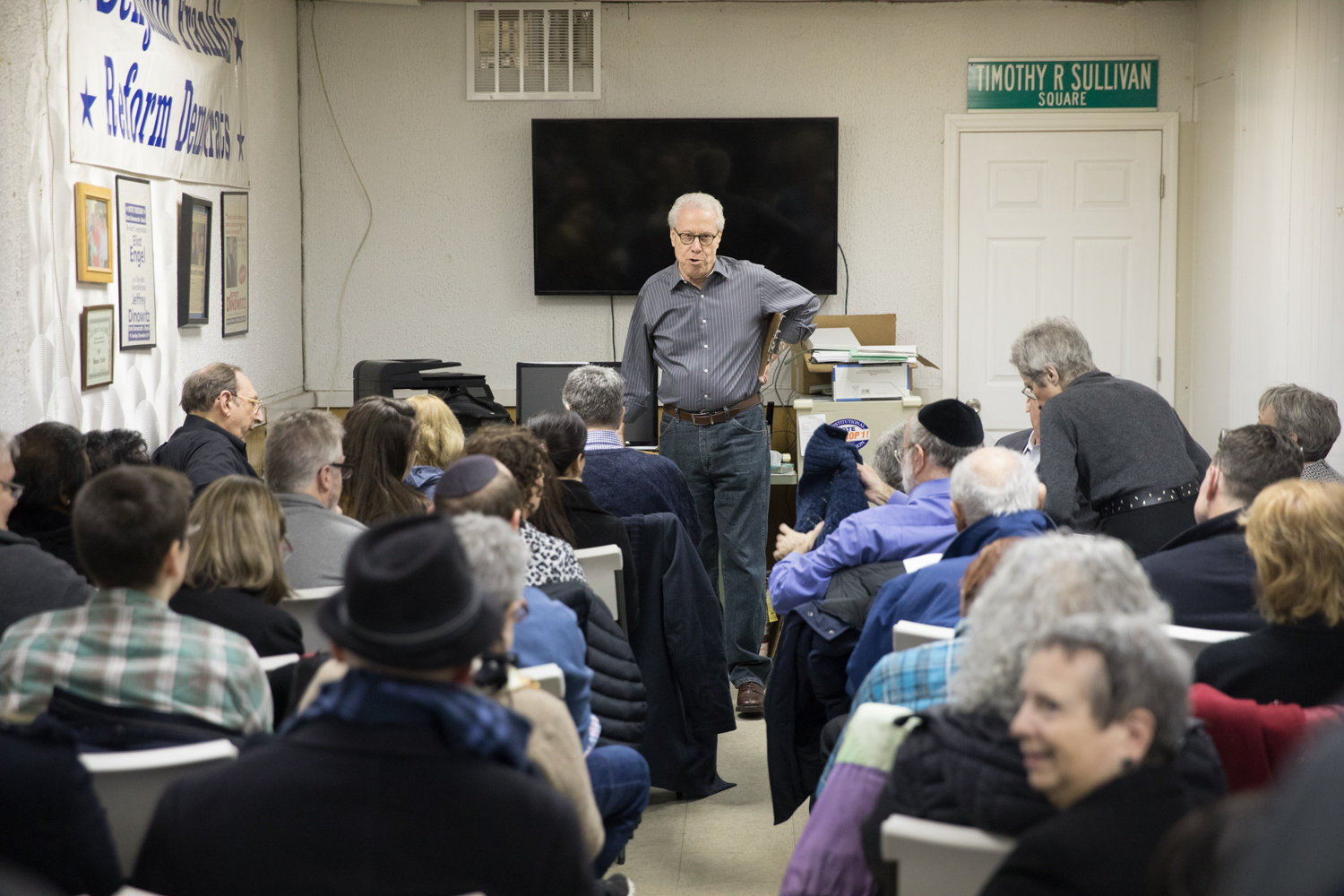 A rift is growing within the Benjamin Franklin Reform Democratic Club ahead of its election for club leadership. The group’s current leaders want to retain their seats, whereas a coalition of newer members have put forward an ‘alternate’ slate of candidates.
JULIUS CONSTANTINE MOTAL 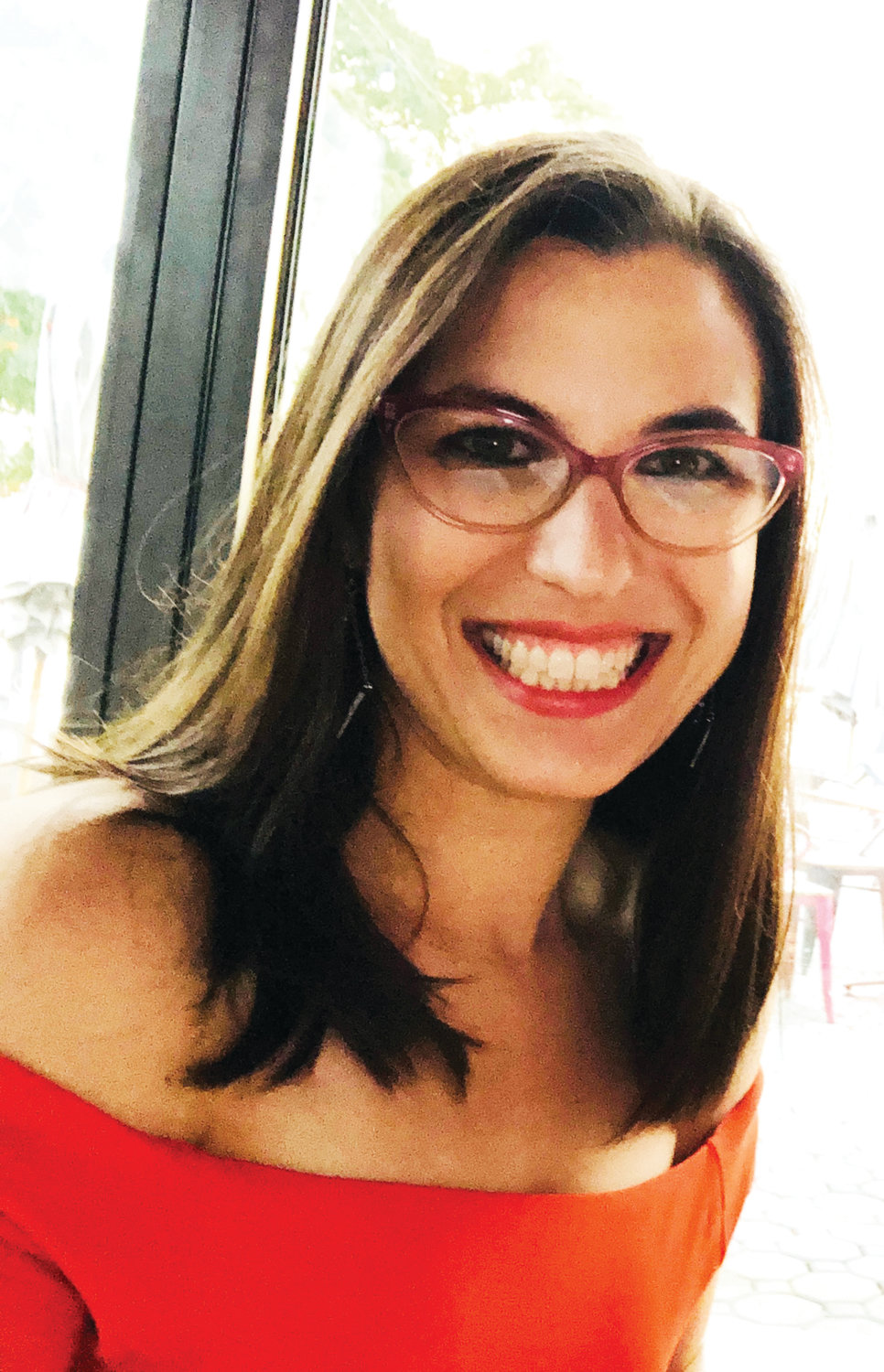 The choice this November on who should reside in the White House come 2021 could be one of the most important ever.

These alarms have sounded many times before — likely with each presidential election. But for Michael Heller, as he watches Donald Trump’s impeachment trial drag on in the U.S. Senate, this might be the real deal.

Long-term collective ideologies of the U.S. Supreme Court. Protecting a woman’s right to choose. Preventing a reversal of long-sought LGBTQ rights. Immigration. Climate change. There’s a lot at stake, and Heller believes Bronx’s contribution to returning Democrats to power could come down to a single election Wednesday night.

That election is for president of the Benjamin Franklin Reform Democratic Club, one of the strongest political clubs in the Bronx. Heller looks to earn a second term atop the club he’s been a part of for four decades, and he’s already planning how he’ll mobilize the club to get the votes out not just for November, but also for the April primary election.

“My goals, first of all, are to get all our locally endorsed candidates elected, and that includes everyone the club has endorsed over the last two months,” Heller said. “We have a strong track record in doing very well in terms of petitioning. I would say that all the people I know to be running (for club offices) will be petitioning for our candidates, and that is very important.”

Normally, the Ben Franklin Club’s annual election would be nothing more than a rubber stamp of whomever the club’s nominating committee chose. But not this year. School teacher Morgan Evers, who jumped into politics in 2018 to help Alessandra Biaggi get elected to the state senate, is leading an “alternate slate” of candidates from the top down she says will give the club a fresh approach to not only helping candidates, but bringing new election-minded volunteers into the fold.

“I am driven by passion, but I’m also a people person,” Evers said. “I believe in inclusivity and diversity, and being inclusive just makes sense for this club right now.”

While the club calls Wednesday’s election “open,” that doesn’t mean those seeking re-election must be happy about it. Evers’ alternate slate came with an unexpected bonus — endorsements from state Sens. Alessandra Biaggi and Gustavo Rivera. In fact, some club members decided to react what former club president Bruce Feld described as Rivera’s “disloyalty” by nearly costing him his club endorsement that evening.

Since the announcement, six more people have joined the race, including Feld’s wife Ellen as vice president, and Courtney Dastis-Galvin — wife of recently elected civil court judge Michael Frishman — on the executive committee. These new candidates happen to match the number of candidates proposed by the nominating committee who are also part of Evers’ alternate slate.

Evers doesn’t believe that’s a coincidence. What’s worse for her, only a handful of the club’s leadership knows how many members are actually qualified to vote, and they aren’t sharing that number with anyone else.

“I can’t really tell what our chances are, because I was not given a membership list,” Evers said. “They won’t give me the number of voters, so I have no idea who is going to be showing up on Wednesday. All I know is they’ve rented a really big hall, and I expect there are going to be a lot of people there that I haven’t seen before.”

That membership list is proprietary information, Heller said. But no absentee ballots will be accepted, so all candidates can see exactly who will vote for them (or against them).

“That really doesn’t have an impact on who is eligible to vote,” Heller said. “If 200 people show up to vote (on Wednesday), then that is the number of votes. It won’t matter what the global number of club members is.”

Another concern of Evers is how closely the Ben Franklin Club appears to be tied to Assemblyman Jeffrey Dinowitz. The lawmaker has been active in the club for decades. His chief of staff, Randi Martos, is a district leader that works closely with the club along with the Assemblyman’s son Eric Dinowitz, who also is running for city council.

Yet Dinowitz has another very close tie to the club: Corresponding secretary Ivan “Duffy” Nedds, who collects a paycheck in the Assemblyman’s office as community liaison. The club’s corresponding secretary plays a key role in much of the club’s administrative work, including qualifying candidates for club offices and maintaining the overall membership rolls.

But Nedds’ work — and access — within the Ben Franklin Club is completely separate from his job in Dinowitz’s office, Heller said.

“He only performs professional activities during work hours” for Dinowitz, Heller said. “The rest he does as a volunteer, and he does it extremely effectively.”

Nedds did not return a request Monday for comment.

Evers said she prefers to give Nedds, and even Dinowitz, the benefit of the doubt when it comes to their work with the Ben Franklin Club.

“From my personal opinion of Assemblyman Dinowitz, he’s a standup public servant with integrity,” Evers said.

“I would hope that any member of his staff, including any who might hold positions in the club, will follow the rules.”

What Evers is more focused on is assuring many of the longtime members that if she wins the club’s presidency on Wednesday, she will make plenty of room for everyone.

“I have enjoyed working with almost everyone at the club this year, and as a leader, I wouldn’t push a single person out,” Evers said. “I want to bring everyone together. The bigger the membership we have, the stronger the club we will be. Our club is going to be strongest when we include everyone.”

Those are sentiments Heller agreed with when asked last week.

“When this whole thing is said and done, we need to come together to defeat Donald Trump,” Heller said. “I hope what this means is that we have a good pool of volunteers behind whoever the Democratic candidate ultimately is.”