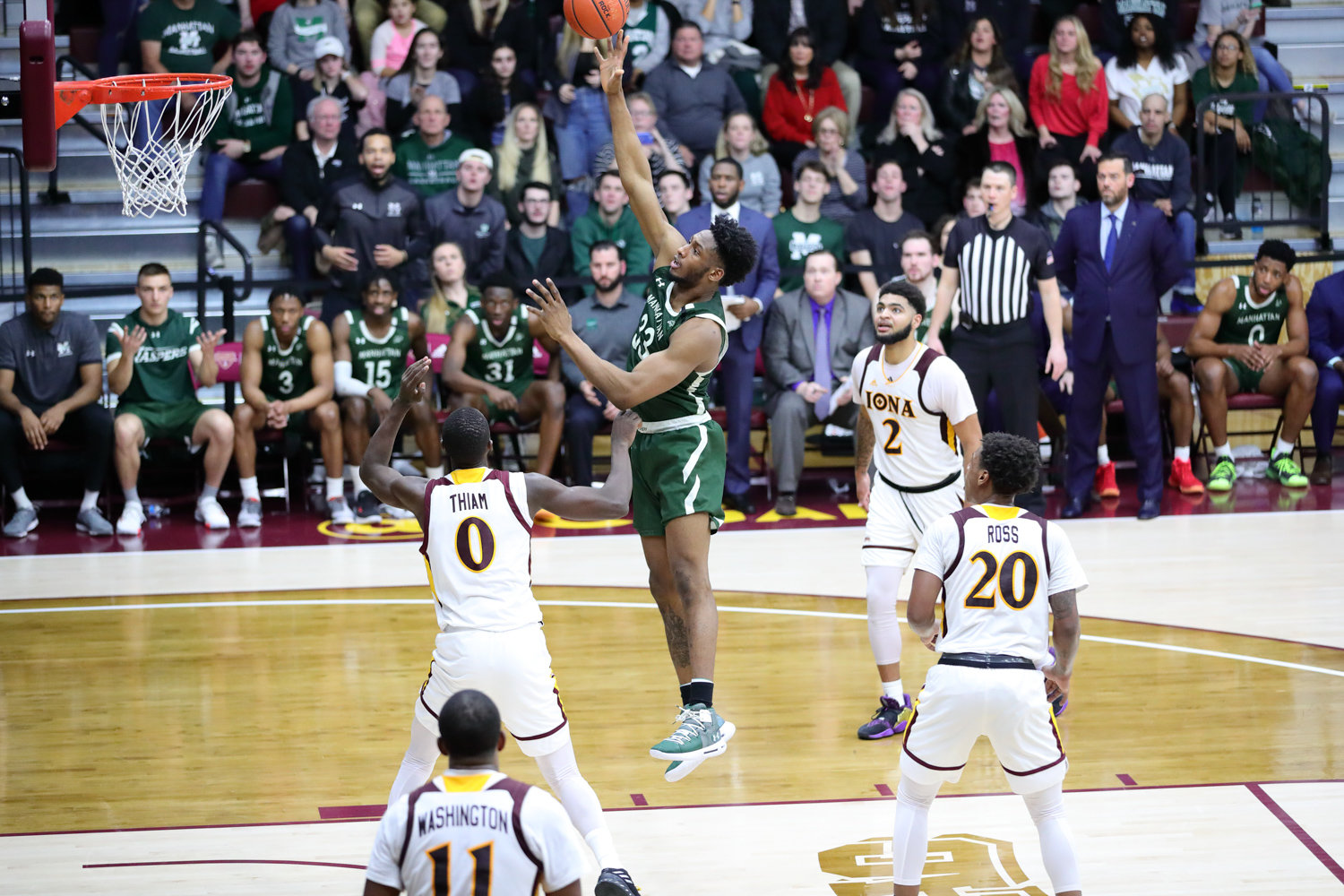 Manhattan senior Pauly Paulicap had 11 points, five rebounds and three blocks versus Canisius, but it wasn’t enough to avoid a one-point loss to the Griffs.
Courtesy of Manhattan College 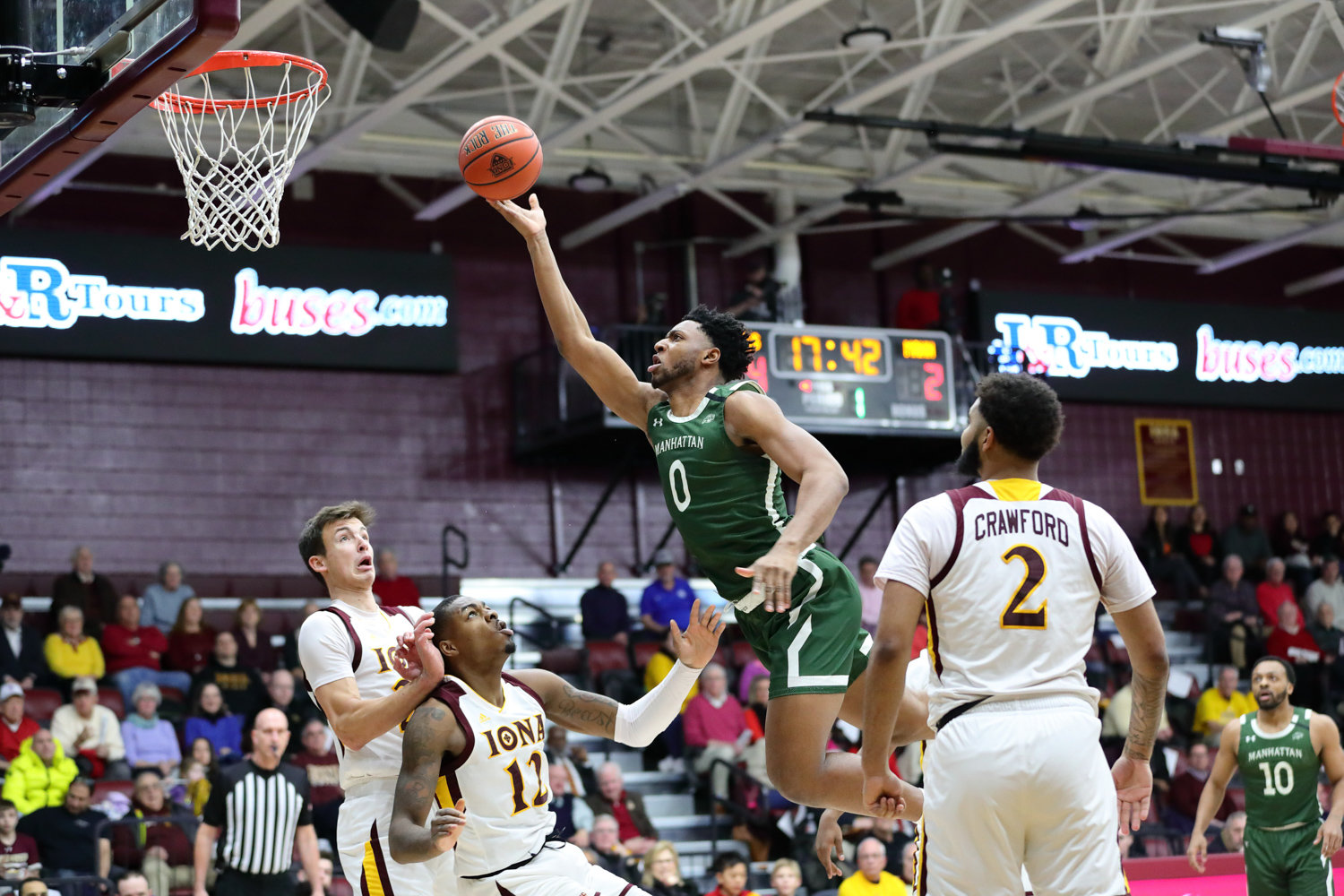 Sophomore Warren Williams led the Jaspers with 13 points, but he couldn’t prevent Manhattan from dropping a one-point decision to Canisius last Sunday.
Courtesy of Manhattan College
Previous Next
By SEAN BRENNAN

This was not how Manhattan head coach Steve Masiello envisioned last weekend playing out.

With a match against first-place St. Peter’s on Friday night followed by a visit from last-place Canisius for a Sunday matinee, the goal for the Jaspers was to sweep the weekend series and make a major move in the standings in the Metro Atlantic Athletic Conference.

The Jaspers went into the weekend toting a 7-7 conference mark. So while catching St. Peter’s (10-4 before the weekend) to win the regular-season title might have been out of reach, a pair of wins would have had the Jaspers on a northward trajectory up the standings, landing anywhere from third place to fifth.

And with the top-five finishers in the regular season earning a first-round bye in next month’s MAAC tournament in Atlantic City, that landing zone would have been just fine with Masiello.

But Friday night brought a heartbreaking 67-64 loss to the Peacocks to throw a wrench in the Jaspers’ weekend plans. It’s no crime going down to the conference leaders, but the Jaspers had to dust themselves off quickly and end their three-game losing streak with a resounding victory over woeful Canisius.

But Manhattan’s weekend simply went from bad to worse.

The Jaspers played superbly in the first half, building leads as large as 18 points before settling for a 16-point advantage at halftime. And when Manhattan’s Tykei Greene knocked down three free throws with 19:24 remaining in the game to keep the Jaspers’ lead at 17, it was just a matter of time before Manhattan put Canisius out of its misery.

Slowly the Golden Griffs chipped away as Manhattan’s offense went into a deep freeze. And behind the spirited play of Canisius’ Majesty Brandon — a kid from the Bronx, mind you — the Golden Griffs produced an epic comeback win when Brandon knocked down a pair of free throws with 12 seconds to play before Manhattan’s Samir Stewart missed a potential game-winning jumper at the buzzer as Canisius stunned the Jaspers 57-56 at Draddy Gym.

The loss dropped Manhattan to 11-14 overall, and 7-9 in conference play.

For the first 20 minutes of Sunday’s game, the Jaspers did little wrong. Their defense was stifling the Griffs at nearly every turn, forcing nine turnovers, beating them on the boards (19-13) and limiting Canisius to just 18 first-half points as Manhattan built a 34-18 cushion at the break.

“I thought we did a good job of attacking them,” said Masiello, now in his ninth season as head coach. “We shot 43 percent from the field (for the game), we shot 56 (percent) in the first half. But we missed some easy ones in the second half, and that was that.”

While the Jaspers were missing those easy ones, Brandon was not. The junior made the most of his homecoming before family and friends by scoring all 20 of his points in the second half. He poured in 10 of those points in the half’s first eight minutes as Canisius pulled within 44-32.

His three-pointer three minutes later shaved the Jaspers’ lead to 46-39, and a second three-ball with 6:02 to play had Canisius trailing just 51-47. Manhattan looked powerless to contain Brandon, and when he dropped in a jumper with 4:44 to play, the game was tied at 51.

The contest saw five lead changes down the stretch with Manhattan taking its final lead at 56-55 on a bucket by Christian Hinckson. But Brandon put the final touches on his stellar performance, sinking the deciding free throws to complete the unlikeliest of comebacks for Canisius.

“Majesty came in and he goes 6-for-13 (shooting) and has 20” points, Masiello said. “He hurt us, especially in the second half. He’s a Bronx kid who came home and you knew he was going to try to get going. He did a good job.”

The loss leaves the Jaspers in a four-way tie for sixth place in a bunched-up MAAC, just a game behind fifth-place Iona and a game-and-a-half behind fourth-place Rider. With four games remaining — beginning with Wednesday night’s home match against 10th-place Marist — there is still both time and opportunity for Manhattan to right its ship and snag one of the coveted first five spots in the standings.

“We just have to chip away and get in that top five and make a run at it,” Masiello said. “We’re right there.”